Monday, July 4
You are at:Home»Columns»Just another point of view»Why cell groups are the pillars of our Christian communities 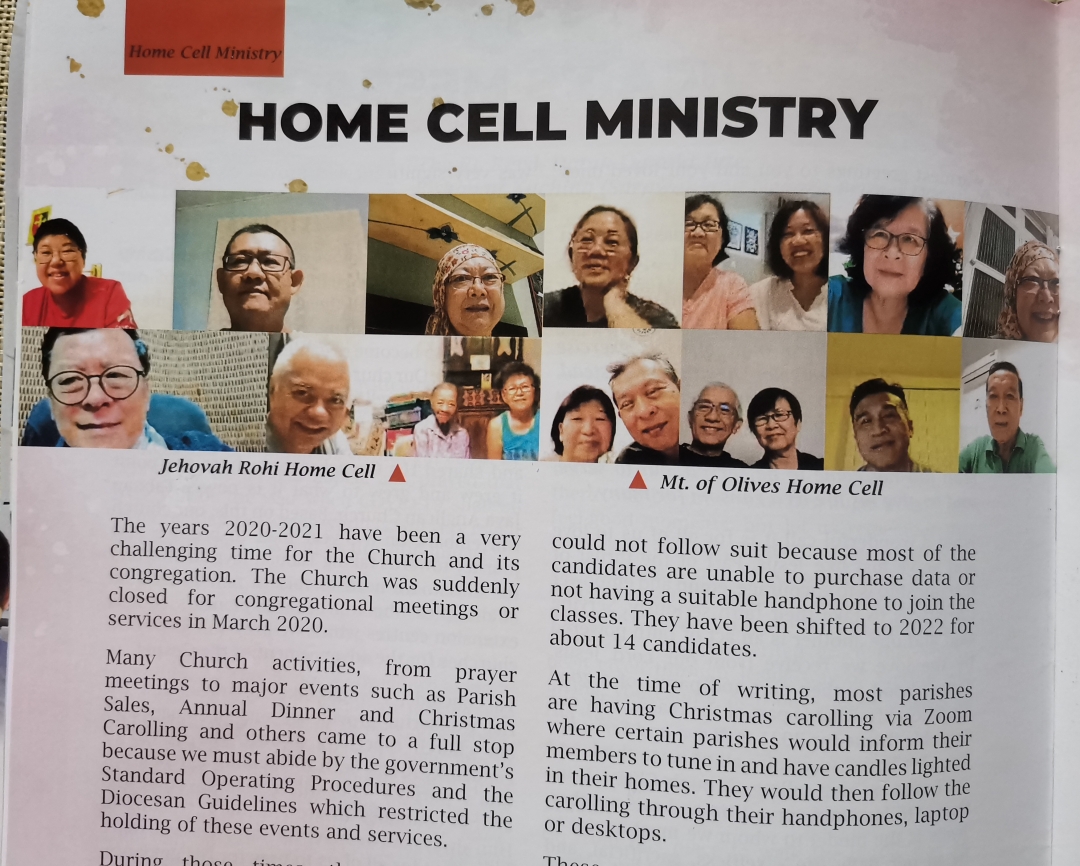 WHEN I was ‘born again’ and had become an Anglican Christian in August 1988 at St Faith’s Church in Kenyalang in Kuching, it was emphasised strongly that I should join a ‘Home Cell Group’ to be able to ‘grow in my faith’ – and I had dutifully joined one such, which was led by the late Ken Goh and his wife Faye, and assisted by Thomas Jacques and his wife Christina.

Home cell groups within the Christian community is used in almost all the denominations of the faith. They are intended to be small numbers of Christians, usually between six and 12, led by a cell leader and are usually grouped together because of common locality, age groups, interests or some other reasons.

Meetings are usually conducted on a weekly basis and in any of the members’ homes or other venues, rarely in church itself.

Home cell groups have been used most successfully to teach and study the Bible and to personalise Christian fellowship. The term ‘cell group’ is derived from biology: the cell is the basic unit of life in a body, so just as a body is made up of many cells to give it life, the cell church group is made up of cell groups that give it life.

Many churches here have seen immense growth due to their extremely active cell groups.

In recent times, the world ‘cell’ has had its extremely negative connotations with terrorist ‘sleeper cells’, which became famous and notorious post-9/11 especially in the US and certain parts of Europe.

Most of us would have watched with horror the suicide bombings and terrorist acts carried out after Sept 11, 2001, and the words ‘sleeper cells’ of undercover and secret networks of terrorists scattered around the world had us all in the grip of fear.

At one stage, they had even struck close to home as they were found to have been operating out of Kuala Lumpur, our nation’s capital.

In the history of the Christian church, however, small groups have been used both as an evangelistic tool as well as for discipleship purposes. Historian Herbert Butterfield, writing in his book ‘The Role of the Individual in History (1979)’, had strongly believed that: “The strongest organizational unit in the world’s history would appear to be that which we call a cell because it is a remorseless self-multiplier; is exceptionally difficult to destroy; can preserve its intensity of local life while vast organizations quickly wither when they are weakened at the center; can defy the power of governments; is the appropriate lever of prising open any status quo. Whether we take early Christianity or sixteenth-century Calvinism or modern communism, this seems the appointed way by which a mere handful of people may open up a new chapter in the history of civilization.”

My own personal experience with local home cell groups have been extremely good – they have benefitted me in my walk with Christ and my growth as a Christian. The cell group has also strengthened bonds of friendship, and family love and closeness – we are lucky as without our groups, we had also included close family members as well.

Such groups, besides following the scheduled format of bible study and prayers and singing of praise songs and hymns, would always be concerned about each other member’s well-being, welfare and good health – physical, mental and spiritual.

In fact, the format of such cell group meetings have not changed much since the days of John Wesley (1703-1791) who was widely considered as the ‘father’ of the modern day small-group concept of Bible study.

His words still apply to a great extent: “To bring small numbers of people together to pray, read the Bible and listen to exhortations, and to encourage and enjoy each other’s company.”

I was a member of my first cell group at St Faith’s Church for about eight years, during which time our initial numbers had grown from eight till it was 20 plus (teenage children of adult members had also joined us along the way).

Usually, the church would require such a big group to break away and form another new group, which had eventually happened.

In the early years, we were extremely active and we had also strictly adhered to the format as dictated by the Church – most gatherings/meetings/Bible study evenings were allotted their times for prayers, singing of praise songs, Bible study, personal counselling and lastly, a social gathering when members could ‘BYO’ (bring your own) – either snacks, cooked food, drinks or fruits, and we would all have a quick supper. Usually, such cell group meetings would start around 8pm and last an hour, or at the most, 90 minutes.

Over a period of time, and as fellow members became more familiar with each other and begun sharing more common interests the danger of such gatherings becoming, something else would become obvious to the church authorities: if left unchecked, some groups had been known to increase their time socialising and reduce their time studying the Bible.

Such dangers were real and had been corrected if detected early on by the cell group supervisors who would pay surprise visits occasionally.

There is another more serious danger and sadly to say, I have also personally experienced this – throughout the history of cell groups, there had been times when small groups developed into factions and sects that became divisive elements in the church.

I have seen breakaway groups who had either started their own church or joined another.  Reasons for such factions and the ways on how to avoid such issues should prove helpful information for future cell group leaders and the Church itself.

However, as a whole cell groups are greatly beneficial and they do make their useful and manifold contributions to the Church community and its growth and ultimately, to the society at large.

As just one small example, in my church the Tabuan Jaya Anglican Church (TJAC), our cell groups actively run a Victory Community Link (VCL) – it celebrates its 10th anniversary this year.

Its mission is to provide for the physical and spiritual needs of the poor and the needy, of all faiths, as well as for the marginalised in the community wherever they may be.

Perhaps the most important feature of home cell groups is that while studying the ‘Word of the Lord’ and in serving Him, we also learn to love and serve each other – the first lesson taught by Jesus to his disciples. 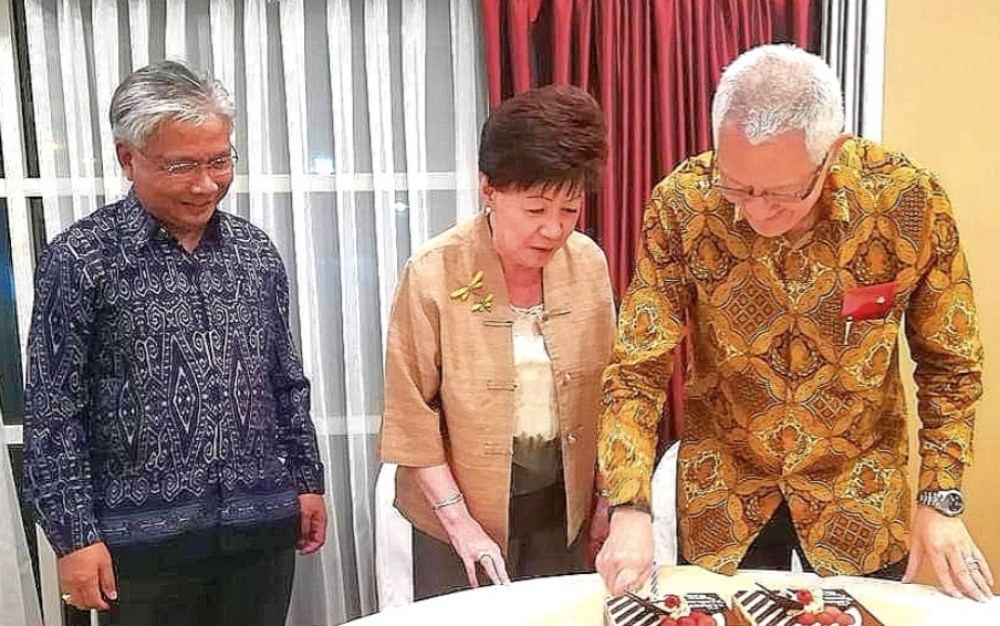 (From left) Bishop Danald seen here with Reverend Tay and his wife, champion proponents of the Home Cell Ministry and Discipleship Training.

This is reflected in the message from the Bishop for the Anglican Church in Sarawak and Brunei, Right Reverend Bishop Datuk Danald Jute, to my church TJAC at the start of this year: “We praise God for Tabuan Jaya Anglican Church, which is at the forefront of discipleship. Aware of the urgent need for genuine discipleship, we have declared the Year 2021-2030 as our ‘Diocesan Decade of Discipleship’. Your theme of ‘To Love and Serve Like Jesus’ is part of the whole package.

“Serving others is often difficult, messy, taxing, and humiliating. For Him, serving and loving were intimately entwined and interconnected. To serve is to love, and to love is to serve, even when it leads to death, yes even death on a cross.”

Praise be to the Lord God on High!

I would like to humbly dedicate this week’s column to bid a fond and sad farewell to Reverend George Tay and his wife Eunice Tay, who will both be returning to their new Caleb Generation Mission in Singapore this June 1, after having been with us here for the past eight years.

They have both been my spiritual guides and mentors since 2016, and I pray and wish them both  – All Glory be to God – as I will always retain in my heart those famous words taught by Uncle George – ‘To Trust and Obey” – The Lord God Almighty!