Tuesday, July 5
You are at:Home»Features»Building a ‘disaster-resistant’ community

Bomba Sarawak strives to enhance level of preparedness, response capacity, with ultimate aim of preventing and reducing impacts of disasters 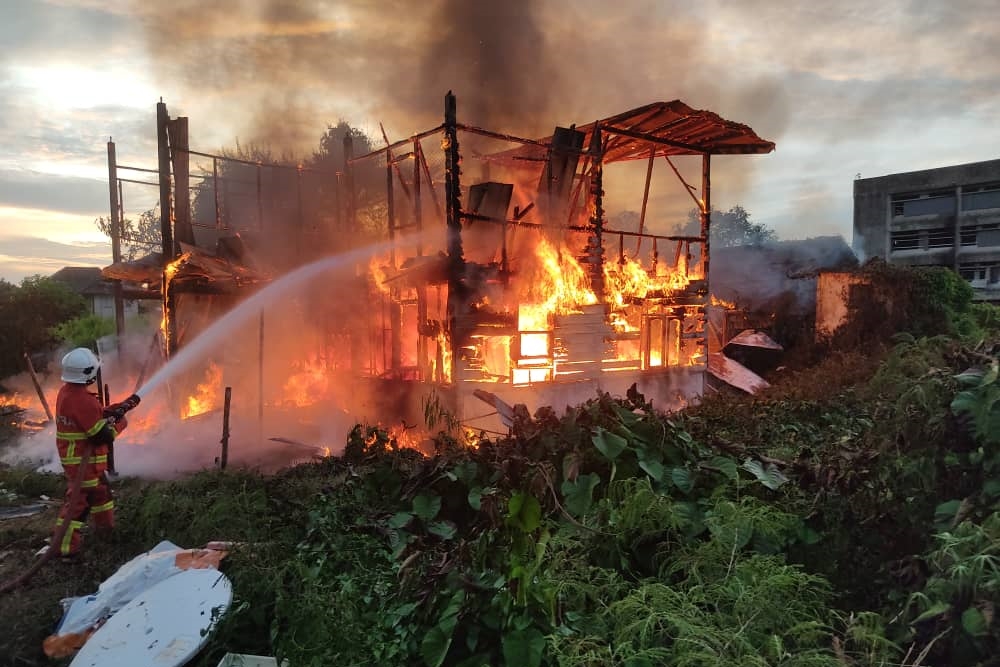 File photo shows a firefighter putting out the fire that destroyed an unoccupied house at Jalan Haji Taha in Kuching on May 17 this year.

DISASTER preparedness consists of a set of measures undertaken by governments, organisations, communities or individuals to better respond to and cope with the immediate aftermath of a disaster, it be human-made or one caused by natural hazards.

In short, being able to prepare for disasters can save countless lives, speed up recovery and also save money.

This is the very reason why the government, through the Fire and Rescue Department (Bomba), has undertaken the effort to educate the public regarding preparedness and response capacity, ultimately aimed at preventing and reducing the impacts of disasters on communities.

“The reaction in the first five minutes would determine the effectiveness of tackling an incident, keeping it minor and going back to normalcy.”

Citing the floods that struck Selangor and Kedah in December 2021, and also ‘the developed’ Klang Valley and Kuala Lumpur in early 2022, he said these were examples of how ‘the people were not prepared for such situation’.

“The level of preparedness of the local communities and the government agencies was very low. Warnings had already been given and the signs of it coming were ignored.

“People from almost all walks of life were caught unprepared, and then the ‘blaming and finger-pointing syndrome’ emerged.

“We were caught with our pants down – a reality that we must accept and we must make changes in terms of our mentality towards potential danger.

“The federal and state governments need to empower communities through disaster preparedness programmes. Without it, it’s like ‘hearing a fire alarm, but not knowing what to do’,” said Khirudin. 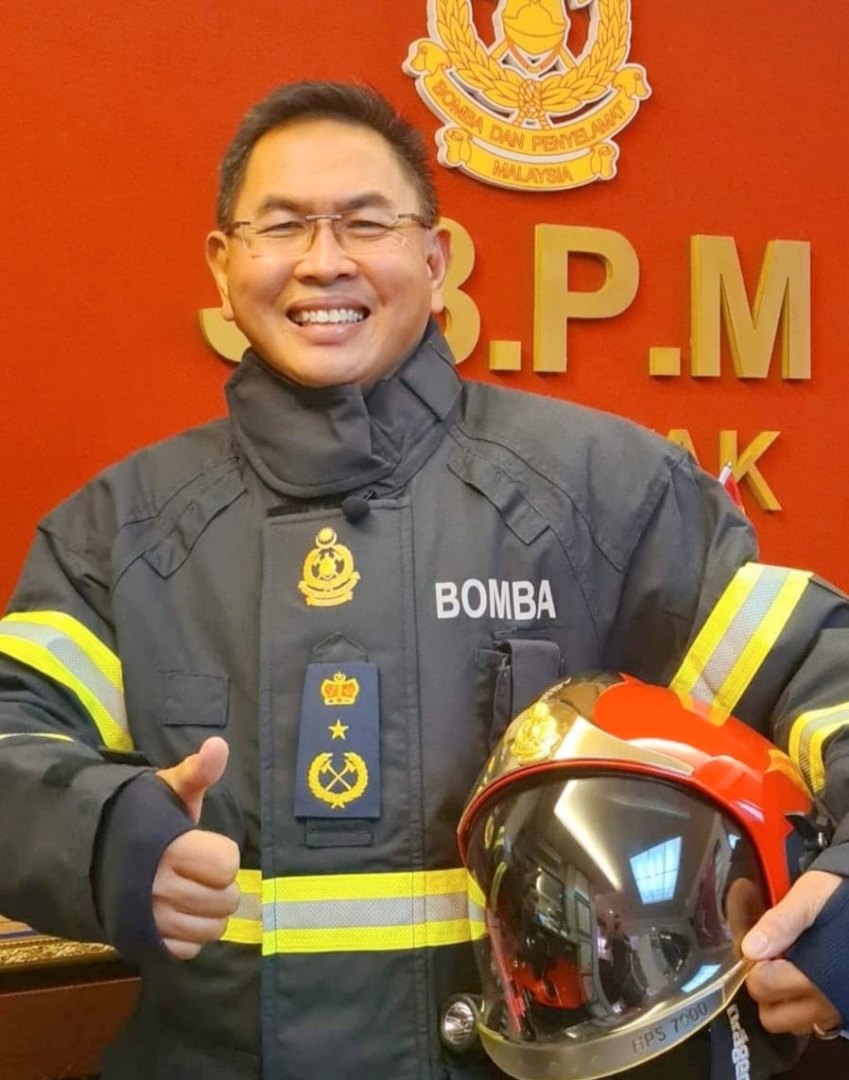 Khirudin has been with Bomba since 1989.

Looking at Sarawak, he pointed out: “We are lucky, blessed and protected.”

Khirudin said the Sarawak Disaster Management Committee (SDMC) and other relevant agencies had undertaken extraordinary efforts in making sure that the communities would be aware and able to communicate and cooperate with the authorities in times of disasters.

“Big applause to the state government and SDMC, as well as the relevant committees for having anticipated potential risks and threats, as can be seen through their advocacy, notifications, well-equipped relief centres, simulations and other areas that show them playing their roles effectively and efficiently.

“Communications and the sharing of information are well planned.

“From Bomba’s view, smooth-running inter-agency coordination and cooperation would lead to success – no one works in silo.”

Not without its challenges

Nonetheless, Khirudin regarded the existing mindset of communities of relying on rescue agencies to address their problems as ‘a challenge’.

He pointed out that in any fire incident or a disaster, a rescue operation could not be carried as a ‘one man-show’, or as one relying on agencies.

“I believe each of us plays an important role in fire safety and management of disasters,” said Khirudin, who has been in service with the department for 33 years. 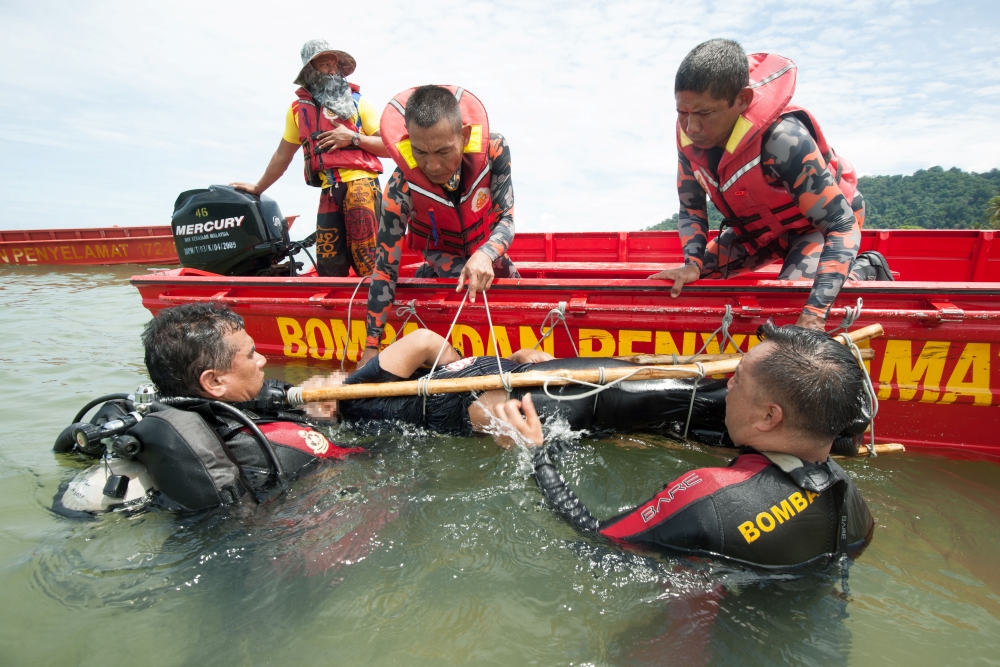 The scope of field operations conducted by Bomba is vast, including search-and-recover mission in rivers and at sea.

On strategic plans by Bomba Sarawak, he said the priority would always be to create a ‘disaster-resilient community’.

“The approach of our safety programmes is more towards proactive action, and thus, creating a community that understands the ‘3P’ concept – ‘Precaution, Prevention and Protection’.

“Every community member must be trained in identifying the potential risks (of disasters) and reducing the severity, or avoiding them.

“At the same time, we strive to have them understand and practise to avoid the ‘Unsafe ABCs’ – ‘Unsafe Acts’, ‘Unsafe Behaviours’, and ‘Unsafe Conditions’.”

Khirudin also highlighted the need to change the mindset and the attitude of the people, and this could be achieved through education.

“Education can generate awareness and enhance knowledge towards establishing a community that knows how to react responsibly and accordingly in the first five minutes (after a disaster strikes).

“Incidents or accidents do not select victims. Whenever disaster strikes, panic is always the culprit because it causes people to lose the ability to think fast and act.” 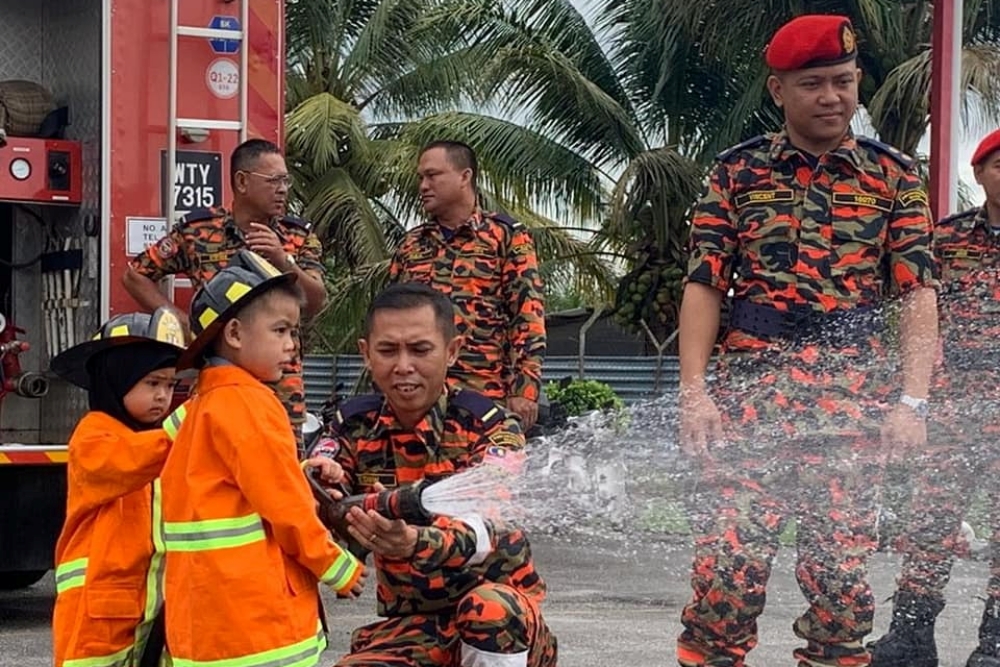 A firefighter shows kindergarten pupils the proper way of handling a fire hose during a demonstration.

On longhouse fires, Khirudin acknowledged the high incidence of cases, which caused many communities to lose their properties and at times, the lives of their loved ones.

He said Bomba had identified electrical fault as the key cause in almost half of longhouse fire cases, as stated in the statistics recorded between Jan 1, 2015 and July 31, 2020.

He said in all the 120 cases, fires had adversely affected 1,554 ‘pintu’ (longhouse units) and incurred losses amounting to more than RM95 million.

In the same review, it reported 1,074 units having been saved from being destroyed.

“The highest number of longhouses fires recorded was in 2018, with 24 cases. From the total, 12 cases were caused by electrical fault.

“The number of properties saved from fires, however, had been increasing since 2018 – thanks to effective awareness campaigns run by the department meant to educate the longhouse folks about fire prevention and safety, as well as things to do in the face of an emergency.”

In this regard, Khirudin stressed about the importance of holding engagement programmes with the communities to educate them on the ‘5S’ – ‘Education, Engineering, Emergency Response Team (ERT), Enforcement and Economic Initiative’.

On residential fire statistics in Sarawak from the whole of 2018 to March 2020, the average incidence rate was 189 cases a year.

“Records showed significant declines in the number cases in 2020 and 2021. This situation is closely related to the Movement Control Order (MCO) where residents stayed at home throughout the lockdown period,” he said. 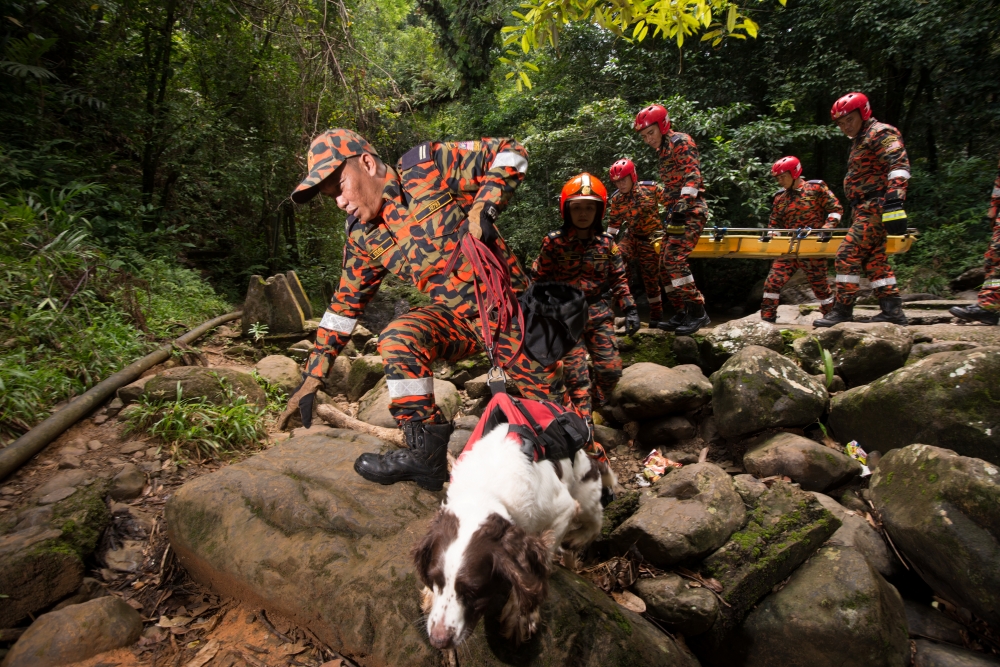 Members of the Bomba K9 Unit, along with one of their English Springer Spaniels, set out to find a missing person in the jungle.

In relation to the preparedness of disasters, especially fires, Khirudin said Bomba had trained hundreds of individuals to become members of the volunteer firefighting units and also the community ERTs in Sarawak.

“Especially in longhouses, they would be the first responders to any fire incident, which is crucial during the first 15 minutes.

“Still, the response time to any emergency, especially in a rural or remote area, needs to be improved.

“Looking at the communities’ response to our ‘Champion’ and ‘Celik Suri’ (meant for housewives) programmes, as well to the Bomba Community and our cooperation with the non-governmental organisations’ (NGOs), things seem to be doing very well.

“Many now realise and understand that knowing fire safety measures and being prepared for any disaster are the responsibility of everyone.”

In this respect, Khirudin said the Bomba would always advocate everyone to have a functioning fire extinguisher at home.

He suggested purchasing the 9kg unit for home, and the 1kg unit for the vehicle.

“They are not that expensive – if you could afford something consting more than a RM200, then you should be able to buy a good home fire extinguisher, which only costs between RM120 and RM150. 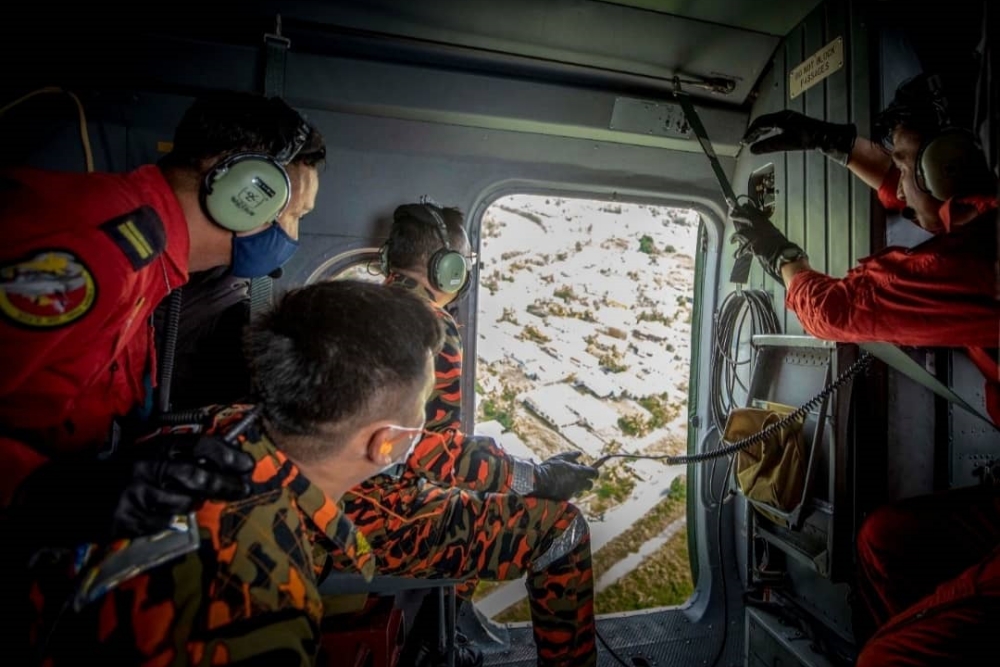 Bomba personnel conduct aerial patrol on board a helicopter during the northeast monsoon season in Sarawak.

Khirudin said Sarawak, despite being the largest state in Malaysia in terms of land size, only had 37 fire stations.

In view of the state’s distinctive geographical and landscape features, it would need at least 55 fire stations, ranging from categories A to E.

“So far, we have only 37 stations, with another two opening soon.

“Even then, 16 existing stations need to be upgraded.”

In this aspect, Khirudin said empowering the local communities had become a short-term approach in terms of preparedness for and response to any fire incident.

“At least, the 3P concept is being implemented. At the same time, basic firefighting tools are being supplied, covered by both federal and state funding, as well as under the CSR (corporate social responsibility) programmes of government-linked agencies (GLCs).

Khirudin said to realise Bomba’s vision of ensuring Sarawak would have the ideal number of fire stations, the department had been seeking grants and assistance, including those from the Sarawak government.

“In the meantime, Bomba Sarawak will utilise the services of the Volunteer Fire Brigade (PBS) and Community Fire Brigade to temporarily meet the needs in certain areas, besides training the rural communities all the basics in fire safety, prevention and also rescue.” 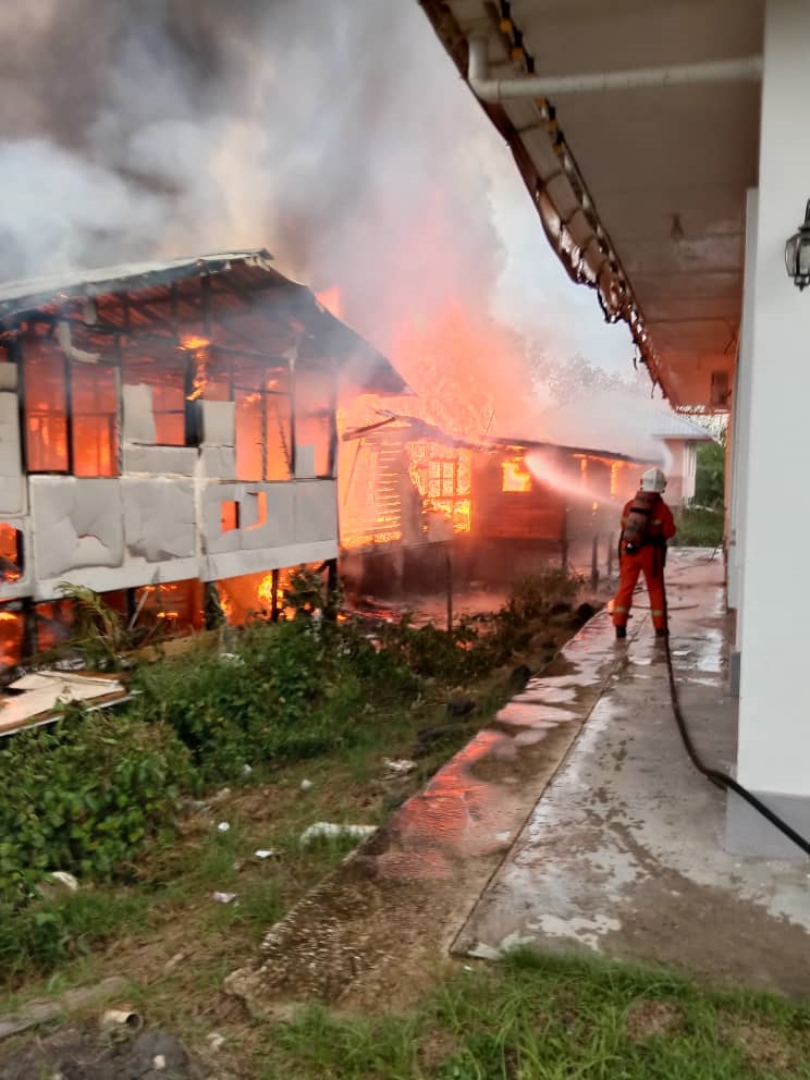 Photo shows a firefighter putting out the fire that burned down a house at Kampung Tutus Hilir in Mukah recently.

A lot to be thankful for

On the occurrence and impact of disasters in Sarawak, Khirudin believed that all Sarawakians ‘should count their blessing’.

“Not many disasters, Alhamdulillah (Praise be to Allah).

“Based on date recorded from 2018 up to 2021, floods and other disasters are still under control – and we pray that it would stay that way.

“That’s the very reason behind the emphasis on building the communities’ preparedness, which would help to cushion the impact from the disasters.”

Khirudin launched his career in Bomba in 1989, starting as a station officer in Sibu. 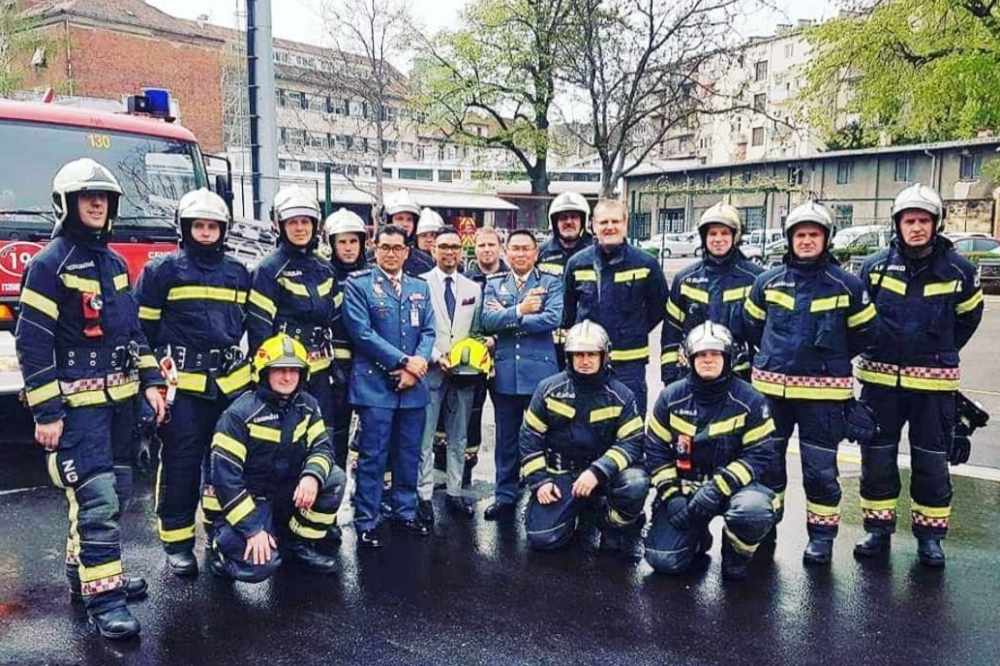 Khirudin (standing, sixth right) and fellow Bomba officers in a group photo with the local firefighters during the Hazmat course in Sweden, in 1994.

Prior to his appointment as Bomba Sarawak director in 2018, he had held various senior positions in the department.

Khirudin holds a Master’s Degree in Science (Emergency Response Planning) from Universiti Putra Malaysia (1998-1999). He has work-study experiences in Japan International Cooperation Agency where he was a recipient in 1997, and in Sweden where he undertook a Hazardous Materials (Hazmat) course in 1994.

Khirudin is also an active associate member of The Institution of Fire Engineers (UK) Malaysia, and a former president of Institution of Master in Disaster and Emergency Management Malaysia (IMDEMM), holding the position for two terms (2016 to 2020).

Additionally, he is an honorary advisor to various NGOs.

Previous ArticleRukun Negara: The National Philosophy of the Federation of Malaysia
Next Article Malaysian Medical Association to organise cancer fundraiser to support Makna