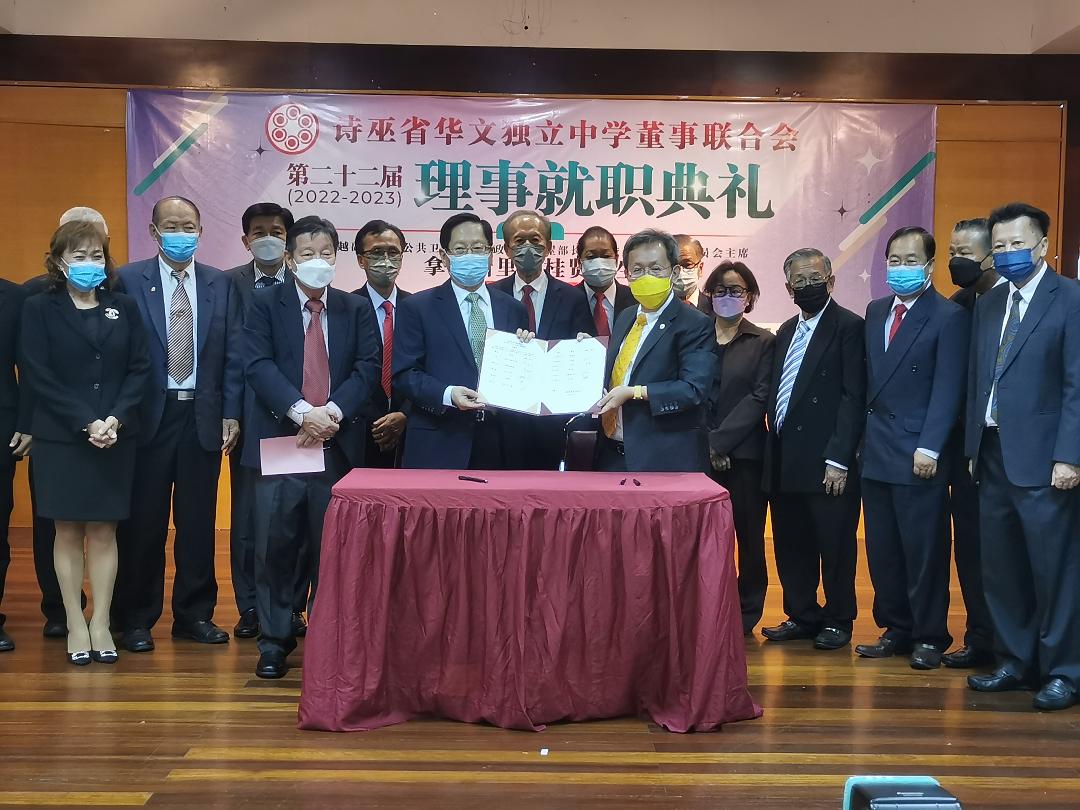 Lau (left) receives the appointment booklet from Sim. Looking on are the members of the Sha Dong Zong.

He said Chinese Independent Secondary Schools and Chinese Aided Primary Schools are the development roots of Chinese education that must be rendered the strongest support.

“It is not only a venue for students to learn Chinese but more and more non-Chinese students are studying in these schools, which makes them all the more significant,” he said at the installation and launching of the 40th anniversary magazine of the Sarawak United Association of Chinese School Boards of Management (Sha Dong Zong).

Dr Sim recalled the late Tan Sri Adenan Satem’s commitment in making Sarawak strong in Chinese education and said the Gabungan Parti Sarawak (GPS) would continue carrying out the promises made by the former Chief Minister.

“When GPS is strong, the development of Chinese education in the state can also stay strong and vibrant,” he said.

He said unlike the federal government, which is constantly having disputes over the top leadership, Sarawak chose to stay out of their political affairs.

“Sarawak will take good care of our own interests and hopefully, we will one day take back our autonomy in education and health from the federal government.”

On the allocation of funds for Chinese Independent Secondary Schools, Dr Sim said the GPS government would continue supporting both them and Chinese Aided Primary Schools in the urban and rural areas.

He said the government could not neglect Chinese Aided Primary Schools and is working to ensure none of them, especially those in rural areas, will be closed.

“Many of the pupils in Chinese Aided Primary Schools in rural areas are from the non-Chinese community, and we welcome them equally with open arms and are eager to educate and guide them so they too can become leaders of tomorrow.

Adding on, he said the establishment of Chinese Independent Schools was not solely for getting education.

“It is also to impart to them the knowledge and wisdom on the cultural roots of the Chinese community and the spirit of Sarawakians on how to become self-reliant and independent,” he said.