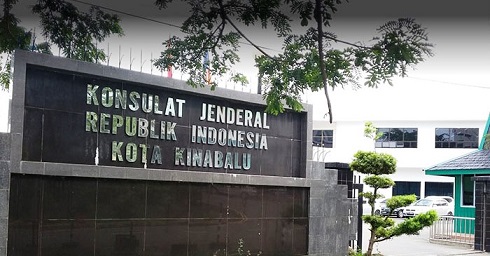 LABUAN (June 13): The Indonesia Consulate General (Kota Kinabalu office) is considering setting up a liaison office on this island to facilitate travel documentation for more than 2,000 Indonesian migrant workers here.

Its consulate general, Rafail Walangitan said this, however, would depend on the urgency to facilitate the processing of documents like passports, stay permits and work permits.

“If we are unable to establish the liaison office, we can deploy our team to this island to help ease the process for our migrants here,” he said after paying a courtesy call on Labuan National Security Council (NSC) director, Mohd Hafiez Mohd Daud, here, on Monday.

Rafail said (before the establishment of liaison office) the Indonesia Consulate General office in Kota Kinabalu would help speed up the travel documentation for Indonesians in Labuan travelling to the Kota Kinabalu office for renewal of passport and related documents.

“The process (renewal or for new passport) will usually take three days, hence, we can consider handling Indonesian immigration affairs (from Labuan) as a special case with a shorter processing time,” he said.

According to him, the over 2,000 Indonesians in Labuan are working in various sectors like services (including as maids), construction and oil and gas.

“Importantly, we want our Indonesian migrants in Labuan to obey Malaysian laws and refrain from involving in any unlawful activities,” he said.

Rafail is leading a delegation from the Kota Kinabalu Indonesia Consulate General office for a two-day working visit from yesterday to several government establishments such as the Labuan Correctional Centre (prison), Manpower Department and NSC.

The group also had a discussion with the Labuan Chinese, Indian and Malay chambers of commerce for possible business matching in the future.

“Our visit to Labuan is to foster good rapport with Labuan-based Malaysian government leaders and business leaders,” Rafail said. – Bernama