Friday, July 1
You are at:Home»News»Nation»Hundreds of lawyers gather near Parliament to protest attack on judge 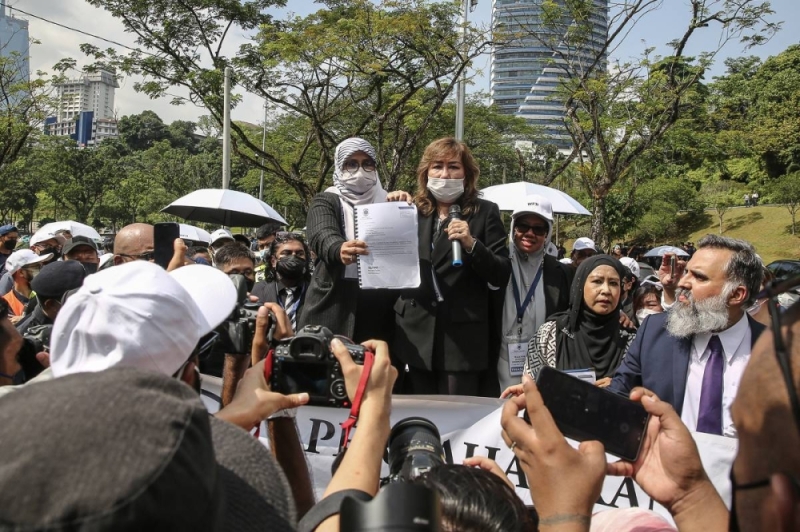 Deputy Law Minister Mas Ermieyati Samsudin holds up the memorandum she received from Cheah during the Walk for Judicial Independence at Padang Merbok in Kuala Lumpur on June 17, 2022. — Malay Mail photo

KUALA LUMPUR (June 17): About 500 lawyers gathered in unison near Parliament this morning to strongly protest the recent attacks on a Court of Appeal judge, which is seen as a bid to subvert the judiciary’s independence.

Organised by the Malaysian Bar, today’s protest came amid rising concern over the rampant online vitriols launched against one of the judges that found former prime minister Datuk Seri Najib Razak guilty of embezzling funds from a 1Malaysia Development Berhad (1MDB) subsidiary.

Current Malaysian Bar president Karen Cheah said today’s protest is meant to send a loud message that the attacks should be taken as a covert attempt to intimidate the judiciary and overrule the conviction, and must not be tolerated.

Initially, the lawyers had planned to march peacefully to Parliament, however, police had refused to allow them to proceed, citing the Peaceful Assembly Act that had been sternly disputed.

Despite attempts to negotiate with the authorities to lift the blockade, the lawyers were still barred from marching. A police officer that led the negotiations said only 20 lawyers would be allowed to walk to Parliament from Padang Merbok.

Cheah suggested that the Malaysian Bar will act against the blockade but did not specify how.

“We will know exactly what to do in terms of our legal recourse against the authorities who have stopped us from exercising our constitutional rights,” she said when addressing the rally.

“We have assembled peacefully,” Cheah said after two rounds of failed negotiations with the police.

Malay Mail was told that the police had initially cited Covid-19 curbs as a reason to prevent the march, but as the lawyers argued that the ban on gathering had been lifted in April, the authorities then claimed that a police permit is required to hold the rally.

The impasse had led several lawyers to accuse the police of acting illegally. Some had tried to convince participants to push through, but the attempts would eventually fail because of the strong man-made blockade.

The number of lawyers participating in today’s march is a far cry from the rally that caught national attention back in 2007, when thousands thronged the streets of Putrajaya in the “Walk for Justice” to protest the alleged rigging of judges’ appointments.

But those at the rally believe today’s protest marks a significant moment for the ongoing campaign to reform the judicial system.

“We are here to make a point that the independence of the judiciary must be respected,” said Hannah Yeoh, MP for Segambut MP and a lawyer by training.

“I think the entire nation is very concerned with the direction of Najib Razak’s case. The nation awaits for a closure of the case,” she added.

“Hopefully the lawyers’ statement today preserving the independence of the judiciary will send a loud message and be a catalyst for an awakening of the nation, for people to open their eyes.”

Yi Ying, 25, one of the many young lawyers who attended the rally, said she was there because she felt the need to speak against the attempt to subvert the judiciary’s independence.

“It is our fundamental right just to be here and to walk,” she said.

“I’m here because they should not be questioning a judge’s integrity just because they are under investigation,” she added.

Cheah said it is against this very background that the Malaysian Bar had decided to take to the streets and prepare a memorandum.

“The memorandum has four demands,” she said.

“The government must uphold judiciary independence, preserve the confidence of the public in the judicial system, condemn the actions of the Malaysian Anti-Corruption Commission, and legislative reforms where alleged judicial misconduct be investigated in a manner that ensures continued public judicial confidence.”

Protesters had initially planned to hand over the memorandum at Parliament, but managed to force the deputy minister to meet them at Padang Merbok following their failure to break through the police barricades.

“I came on behalf of the prime minister to accept a memorandum from the Bar Council,” the deputy minister told reporters.

Protesters dispersed shortly after the deputy minister left at around 11.15am without any arrests made at the time. — Malay Mail