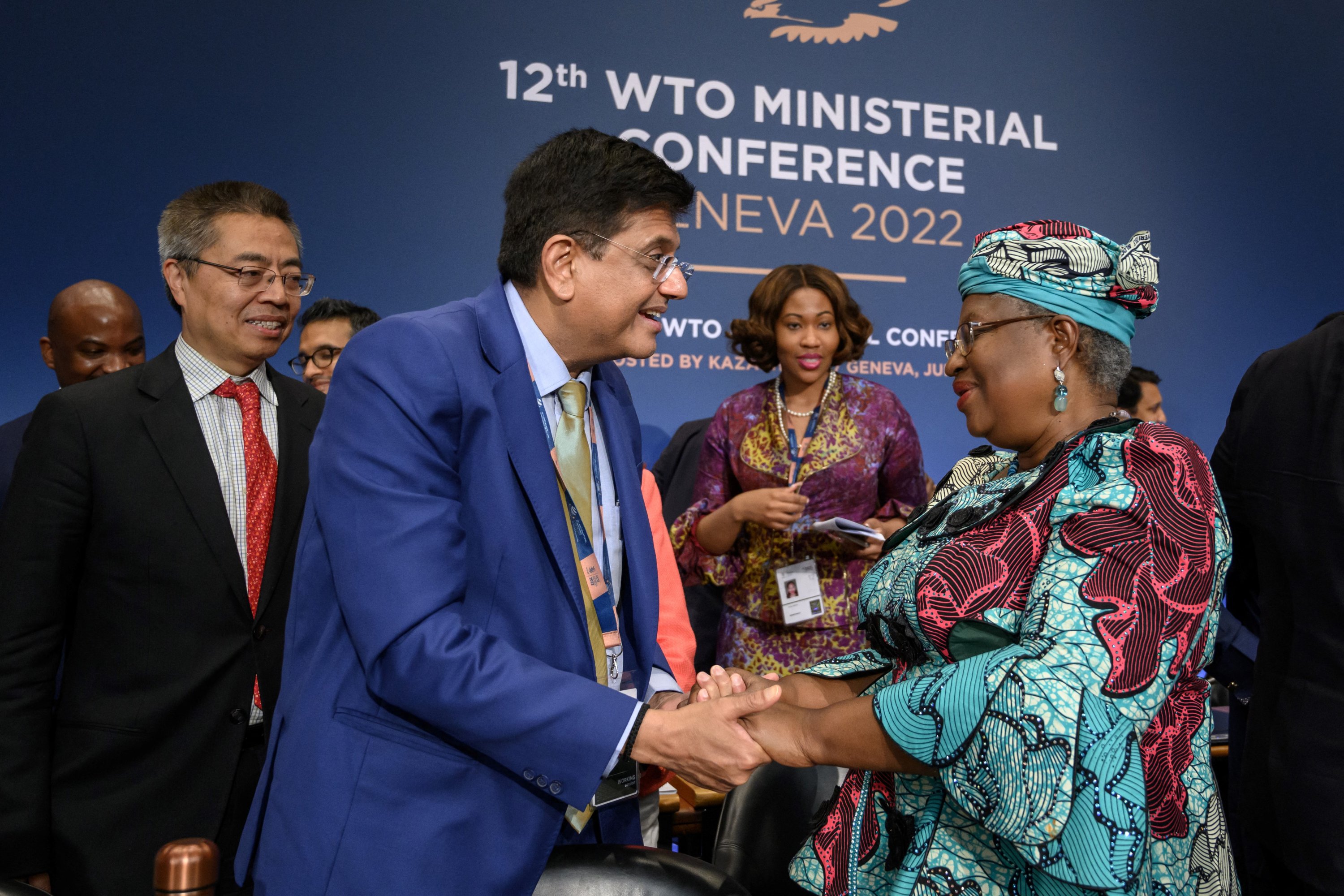 Okonjo-Iweala is congratulated by Indian Minister of Commerce Piyush Goyal after a closing session of a World Trade Organization Ministerial Conference at the WTO headquarters in Geneva on early June 17, 2022. — AFP photo

WTO director-general Ngozi Okonjo-Iweala said the trade ministers’ conference had struck an “unprecedented package of deliverables” which would make a difference to people’s lives across the planet.

The talks at the global trade body’s Geneva headquarters began Sunday and were due to wrap up on Wednesday.

But instead the WTO’s 164 members went straight through on into Friday, finally concluding at around 5am (0300 GMT).

The ministerial conference also agreed on deals on e-commerce, responding to pandemics and reforming the organisation itself.

“Not in a long while has the WTO seen such a significant number of multilateral outcomes,” Okonjo-Iweala said.

“The package of agreements you have reached will make a difference to the lives of people around the world. The outcomes demonstrate that the WTO is in fact capable of responding to the emergencies of our time.”

With ministers struggling to conclude agreements on each topic separately, countries began making trade-offs in a bid to get several measures through in a grand bargain.

The fisheries deal was the last one to get over the line.

Delegations were frantically haggling in the early hours of Friday on the flagship issue being thrashed out at the WTO conference.

Negotiations towards banning subsidies that encourage overfishing and threaten the sustainability of the planet’s fish stocks have been going on at the WTO for more than 20 years.

Okonjo-Iweala, who took over in March 2021, hinged her leadership on breathing new life into the sclerotic organisation.

The former foreign and finance minister of Nigeria positioned herself as someone who can bang heads together and get business done.

The last ministerial conference in Buenos Aires in December 2017 was seen as a flop after failing to strike any heavyweight deals.

The new WTO chief wanted to prove that the organisation could still make itself relevant in tackling the big global challenges.

Some delegations accused India of being intransigent on every topic under discussion at the WTO — where decisions can only pass with the agreement of every member.

But Indian Commerce and Industry Minister Piyush Goyal insisted: “India is not a roadblock on anything … People are realising that we were the ones who actually helped create the sole consensus.”

The second major issue on the table was the plan for a Covid-19 vaccine patents waiver.

Some countries that host major pharmaceutical companies, like Britain and Switzerland, were finding some of the draft wording problematic, while big pharma feared a deal that would strangle innovation.

But Britain’s ambassador in Geneva, Simon Manley, told Okonjo-Iweala late Thursday that after clarification and improvements were achieved, London was “now ready to join the consensus”. — AFP