Tuesday, November 29
You are at:Home»Columns»Just another point of view»It was 25 years ago today – The RWMF Book: A review 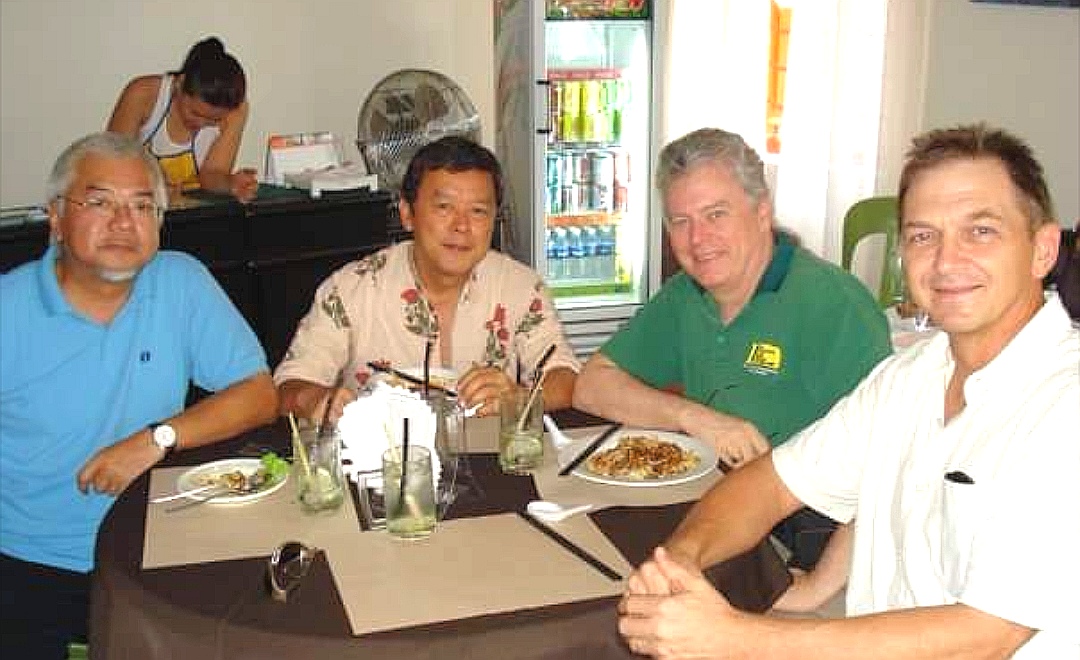 The four founders of the RWMF, reunited in 2009: (from left) Edgar Ong, Edric Ong, Randy Raine-Reusch and Bob Basiuk.

TODAY is the second day of the three-day Rainforest World Music Festival (RWMF) being held in hybrid form at Sarawak Cultural Village (SCV) in Pantai Damai, Santubong, for the very first time in its 25-year history – and what a history it has had!

To help celebrate this historic event, a 155-page hardcover book was launched on Tuesday (June 14) by the state Minister of Tourism, Creative Industry and Performing Arts Dato Sri Abdul Karim Rahman Hamzah – by the two co-authors of the book, Gracie Geikie and Karen Shepherd. The gloriously colourful book stuffed full with great photos is now on sale at RWMF 2022 at the SCV and on www.placeborneo.com – contact telephone number 082-555 189. It is priced at RM180 per copy.

I was delighted to receive a copy hot off the press from Gracie herself on Tuesday, and I hope to do it justice with this brief and frank review.

It has an extremely attractive and well-designed cover showing an iconic sape player, in this case Desmond Junak, a Kayan musician, shot during RWMF 2017, with his instrument at the forefront, and an enthusiastic crowd and audience enjoying his live stage performance – wonderfully immortalised by none other than Kenneth Primus Lee, a professional Kuching photographer who has covered many past festivals as well as other events. 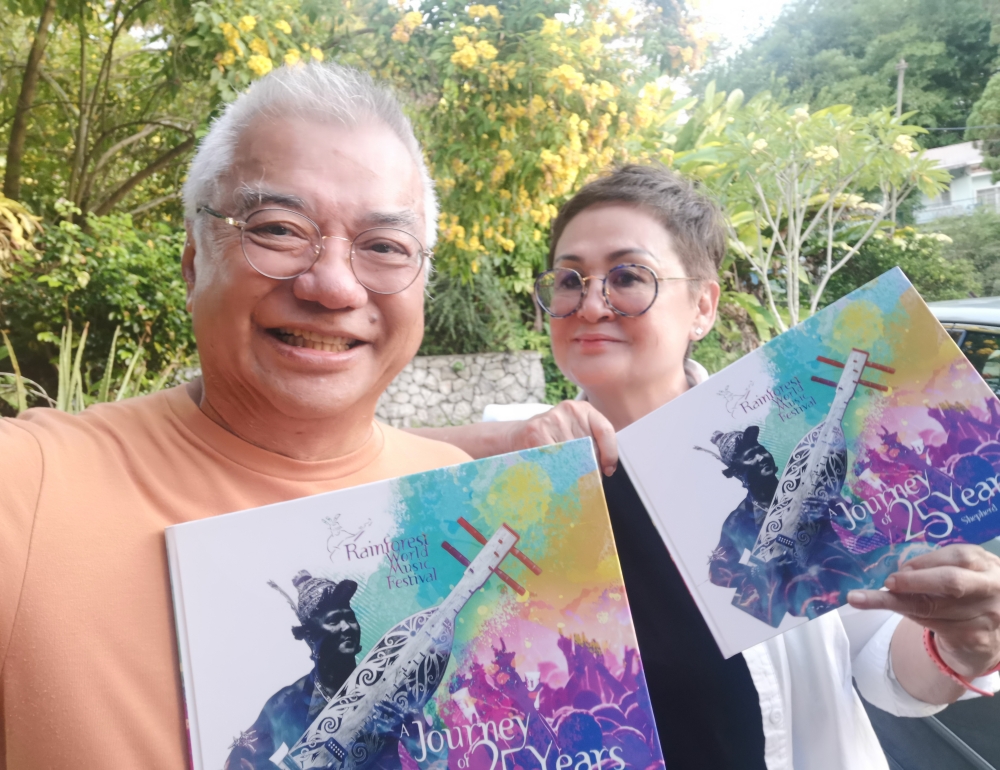 Gracie Geikie (right), one of the co-authors of the ‘RWMF 25’ book, with writer Edgar Ong.

The artistically-beautiful cover gives the book its title ‘A Journey of 25 Years’ coupled with the co-authors names (Karen) Shepherd and (Gracie) Geikie – both of whom have been synonymous with the festival since about a decade ago.

Gracie is a veteran in Sarawak’s tourism industry and had also served a term as CEO at Sarawak Tourism Board and being personally involved with organising and managing similar events for the past many years with her own company Place Borneo – a full-fledged professional conference organiser, headquartered in Kuching with operations in Kota Kinabalu as well.

Karen is a well-established writer and editor of Kuching In and Out Magazine (KINO) and is active in many circles, including the heritage restoration projects under the Sarawak Heritage Society as well as the latest Think & Tink tank of Kuching’s young creative talent pool.

Interestingly, both of them are part of the extremely gifted and culturally innovative and well known Kuching’s heritage Eurasian families of the Geikies and the Brodies!

The book itself I found to be well-written and extensively researched with beautiful photographs taken by the writer Karen herself, the afore-mentioned Primus Lee and three others – Lee Chiang Hong, Suchen SK and Reel FX Studio.

It has its obligatory forewords given by the Premier of Sarawak, the federal and state ministers in charge, a very brief two-page introduction and then, six full chapters finishing with the standard acknowledgements.

I would have loved to read the short essays of both the authors as to their own experiences and on their inspirations on why they had undertaken this project – a more personal touch as it were.

In the book’s Introduction on Page 1, I could feel myself being time-machined back to that hot August night in 1998 at the very first night of the very first festival, with the ‘low-key, laid back gathering of 300 mostly local music lovers, perched on plastic chairs around the lake at the Sarawak Cultural Village’.

Today, 25 years later, and for ‘six consecutive years’, the RWMF was voted into the ‘Top 25 International Festivals’ by Songlines Magazine!

Yes, what a journey it had been, even that very first festival, with the 30 artistes/musicians, the wooden-floored small stage (built to just barely enough to cover the instruments and the musicians on it), the RM30 per night ticket (RM75 for three nights – what a bargain), and the crowd of 300, who on the final night when it had rained, had not sought for shelter but instead, had danced on ,groovin’ to, the finale with the thick mud sloshing under their bare feet, dancing in their well-soaked T-shirts!

What a ride it had been!

From behind the scenes, I believe the budget for the fest too had gone from its humble RM150,000 beginnings to some figure with six zeros behind it!

I believe that today, the auction fee for the food and drinks franchise alone for three nights now could have easily financed the entire 1998 fest then!

I had found that in the introduction to the new book, the writer(s) had somehow omitted or missed out on mentioning the very first and original sape musician whom I (and everyone else, including Randy Raine-Reusch, one of the fest’s original founders) had considered to be the ‘Godfather of  Sarawak Sape Music’ – Tusau Padan. Instead, credit was only made of one of his protégés. It’s a rather glaring omission, which I hope would be corrected in subsequent editions. 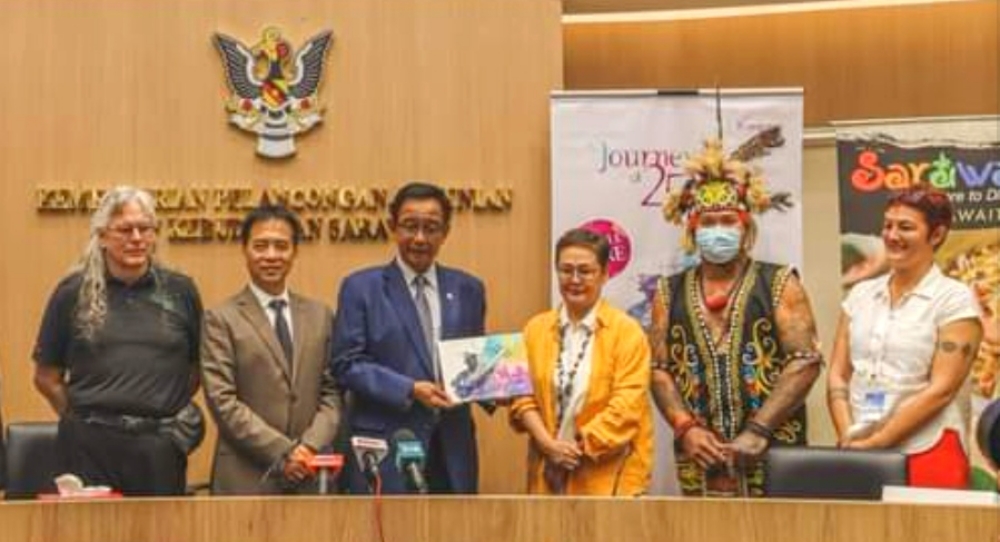 On Page 15, under the subtitle ‘The Early Players’, which had occupied one entire page, accompanied by a great shot of the genius mind behind the ‘seed’ of the fest itself, Randy Raine-Reusch (in a photo-op with wife and co-band member Mei Han) are four paragraphs describing the germination of the idea of the fest itself – mostly factual, but missing out quite a number of early initial players, a few supporting cast and those who had helped it in its early days.

Besides and in addition to the names mentioned (thank you Gracie and Karen for getting the background historically correct when it came to the brothers Ong’s early involvement, despite certain quarters trying to obliterate their part in it all these years) – I would like to mention names like Jayl Langub (without whom the very remote sape players could not be reached), the evergreen Heidi Munan, the late Dr Wan Zawawi Ibrahim and of course, Yeoh Jun Lin and associate Yu Puay who were to play essential roles in the later years.

We also could not have done it without the full and wholehearted support from those representatives from the various state authorities from the Immigration, the Royal Customs and Excise, the Royal Malaysia Police and other authorities too many to mention. All of them had turned up for the regular meetings and had assisted to pave and smoothen the way; thus, helping to establish a system that had benefited all future festivals.

Obviously in such a body of work, comprising just 155 pages aiming to cover a 25-year period with 22 festivals past, it would be nigh impossible to touch on every aspect and to have records and photographs of those older fests. Indeed, one of my few regrets was that during the first five years of the fest when I was involved as the Selections Director, I did not take the chance to snap photographs (although in those days it was only a Sony Compact 35mm, those were the pre-smart phone Leica-lens days). Besides which my down time was spent mostly entertaining the musicians at the beer tents, to be honest!

I would have loved for the writers and researchers to have included the entire list of all those musicians, groups and bands who had performed at every single festival since it had started that memorable August night in 1998. It’d be fun to have a great collection of those ‘missing years’ – the first decade of 1998 to 2007, wouldn’t it? How about a global search for photographs to start with?

I also feel that our current sape proponents who are now fast becoming well-renowned globally – Alena Murang and Mathew Ngau Jau – be featured on their own standing, maybe even with their own books? Judging from the amount of rave reviews and sound-bites given to both in this book alone, on social media and on YouTube, their time has arrived and they should now seize their moment!

I am often asked about what would be my ideal line-up for my own personal RWMF if I were to select from all those musicians and bands from past festivals: so here goes – please note that they’re mainly from my first five-year personal involvement! I am also including those who are no longer with us:
Tusau Padan / Uchau Bilong (RIP) + Mathew Ngau Jau;
Mak Minah (RIP);
Tuku Kame (led by Narawi Rashidi);
Sayu Ateng (lead singer, RIP)  (sponsored by Deanna Ibrahim);
ASZA (Randy Raine-Reusch with Mei Han);
Shooglenifty;
Joey Ayala / Cynthia Alexander (sister);
Huun-Huur-Tu, and;
Inka Marka. 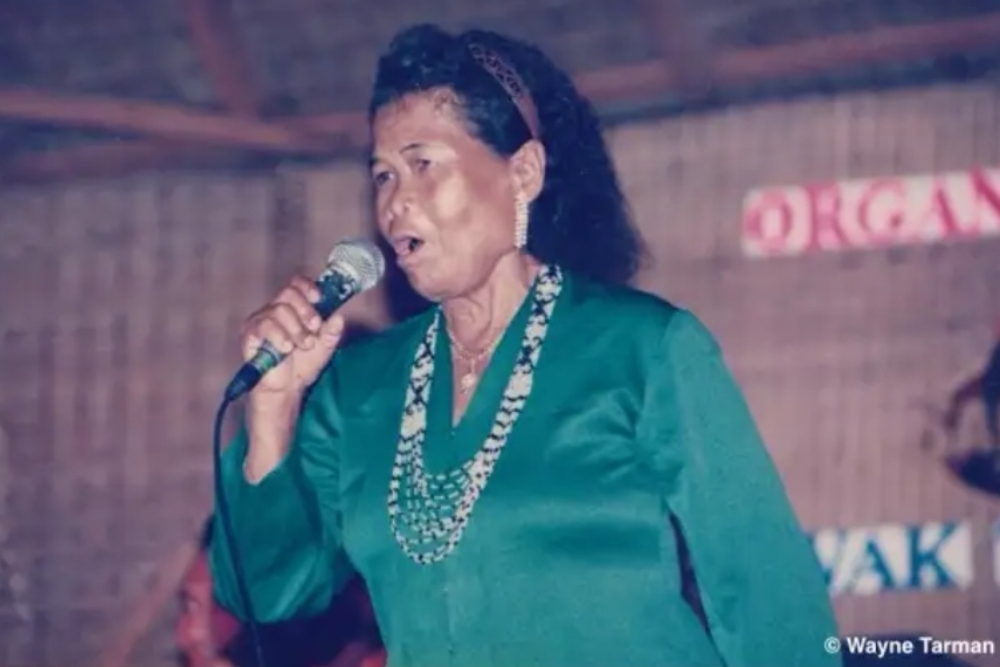 Mak Minah, from the Temuan Orang Asli tribe in Peninsular Malaysia, was hugely popular at the first festival in 1998. — Photo by Wayne Tarman 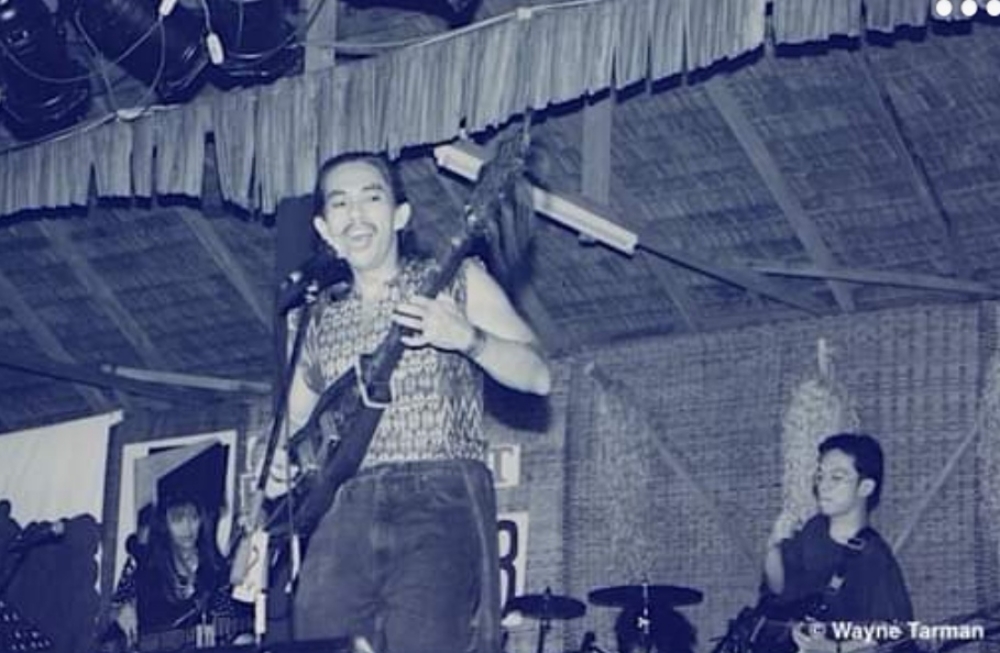 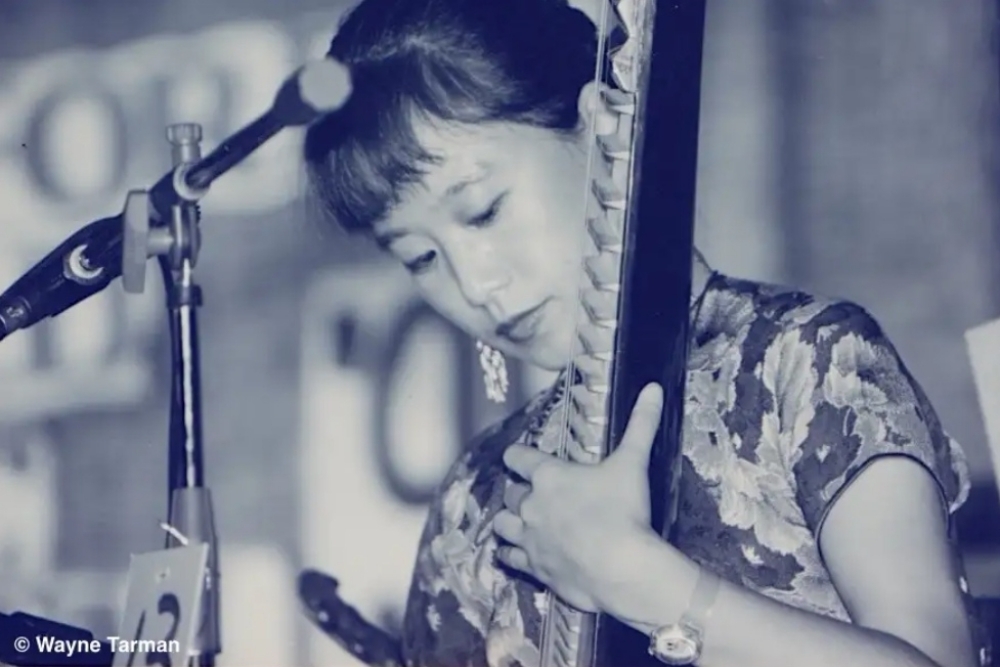 Qiu Xia He of ASZA at the 1998 festival. — Photo by Wayne Tarman

Congratulations to both Gracie and Karen on producing such an excellent publication – may it be a bestseller and go into many editions in the future!

(Although we probably won’t be around for its 50th!)

For those who are attending this weekend’s RWMF 2022 – do enjoy yourselves, party in the jungle, and stay safe and keep healthy, and come again next year!

Also – remember the history of the fest, its origins and those who had, 26 years ago, came together with an idea and had seen it through to its very successful fruition today!

Sarawak celebrates its music with the world! Party on!