Tuesday, February 7
You are at:Home»Columns»Nature Matters»Abahs, colugos, and dracos – natural forest gliders
For the freshest news, join The Borneo Post's Telegram Channel and The Borneo Post on Newswav. 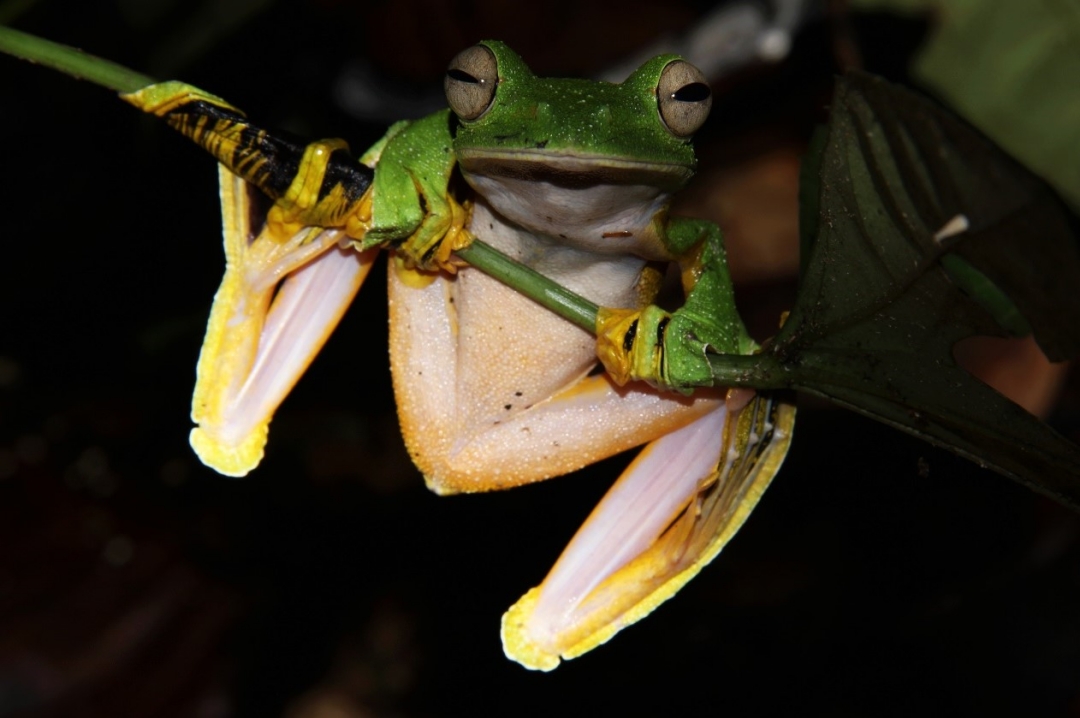 JUST how many readers have ever heard of these three words let alone appreciate that they are animals that glide through the air in our Bornean rainforests? An Abah is a frog; a draco – a lizard, and a colugo – a lemur-like creature.

Its characteristic features are its large body size and length of between 8cm and 10cm, large eardrums, and large horizontal pupils. Its long limbs and totally webbed fingers and toes with flanges of skin stretching between its limbs distinguishes it from other species of frog. A vivid green back, pale yellow undersides, and the black colouration of the webbing on its four feet certainly distinguishes it from other tree frogs.

Living in the mid-canopy level of primary forests growing up to an altitude of 600 metres above sea level, I was very fortunate to observe one gliding above my head at Danum Valley, Sabah. The membranes between their toes and their loose skinned flanges act as wings as they fall from trees, gliding over distances of 15 metres. Their toes hold very large sucker-like toe pads, which act as sticking pads when they climb back up a tree.

Near to mating time, the female (incidentally larger than the male frog) secretes a fluid which she then churns up into a mass of bubbles at ground level thereby creating her nest into which she lays her eggs. These are then fertilised by the male. Usually, the nest is built above a water source so that when the tadpoles develop, they can fall into the water. Whilst primarily feeding on insects, they have been known to eat small birds and even toads. Their major enemies come in the form of tree climbing snakes.

Forty species of gliding lizards or ‘dragons’ have been identified, 16 of which are peculiar to Malaysia. They are arboreal, insectivorous creatures relying patiently for ants and termites to pass by. It is their patagial membranes together with their thoracic ribs that provide the lift forces, which allow them to glide as far as 60 metres. They control their flight paths by using their forelimbs which then release the patagia just before landing forefeet first on the side of a tree.

The common flying lizard (Draco volans) is about 8.1cm in length with an 11.4cm long tail. The female has a longer tail of 13.2cm. Its colouration varies according to the sex and is generally brownish to bluish grey, with a yellowish gular streak under its throat.

Reproduction usually occurs in December or January with the female draco building a nest for the eggs by forcing her head into the soil to create a small hole. She then lays her five eggs, covers them with soil, which she packs down with her head, guards the eggs for 24 hours, and then suddenly leaves them for good. The incubation period is about a month.

Fiercely territorial, the male’s territory includes two or three trees in which one to three females may live. Whilst the males defend their territory, the females seem free to wander at will.

The Sunda or Malayan colugo ranges over a wide area, southern Myanmar, Thailand, Malaysia, Indonesia, Vietnam, and Singapore. This species (Galeopterus variegatus) measures 42cm long with a long tail (18cm to 27cm) and weighs from 0.94kg to 1.3kg – roughly about the size of a domestic cat.

It is generally mottled grey or greenish grey in colour, although some reddish-brown ones have been seen. Mainly nocturnal, they sleep by day in the dense foliage of a tree’s canopy by clinging to the trunk or the underside of a branch.

A skilful climber, its patagia (gliding membranes) open wide between its fore and back legs to allow it to glide over a distance of 100 metres. With large eyes, it has excellent night vision and possesses small ears and a pointed snout.

Foodwise, it thrives on leaves, buds, shoots, flowers and fruit. In Sarawak, it has also been observed to feed on insects. It is a highly versatile mammal adapting to a variety of environments ranging from gardens, plantations, mangrove swamps, and orchards to mountainous areas. The female bears one baby and carries it clinging to her flight membranes.

The Bornean colugo (Galeopterus borneanus) was first identified as a separate species by Janecka and others in 2008 and has been recorded up to an altitude of 900 metres in Sabah. Similar in colouration to the Sunda colugo, it feeds mostly on leaves but 10 years ago, one was spotted at Bako National Park feeding on ants inside a tree hole. Fiercely territorial, it marks its territory with scent.

For too long these animals have been mistakenly described as ‘flying’ when ‘gliding’ is a far more accurate description of their flight patterns relying, as they do, on thermals for uplift and their bodily adaptations for their journeys through the air from tree to tree.