Wednesday, July 6
You are at:Home»Features»Stitching passion into her work 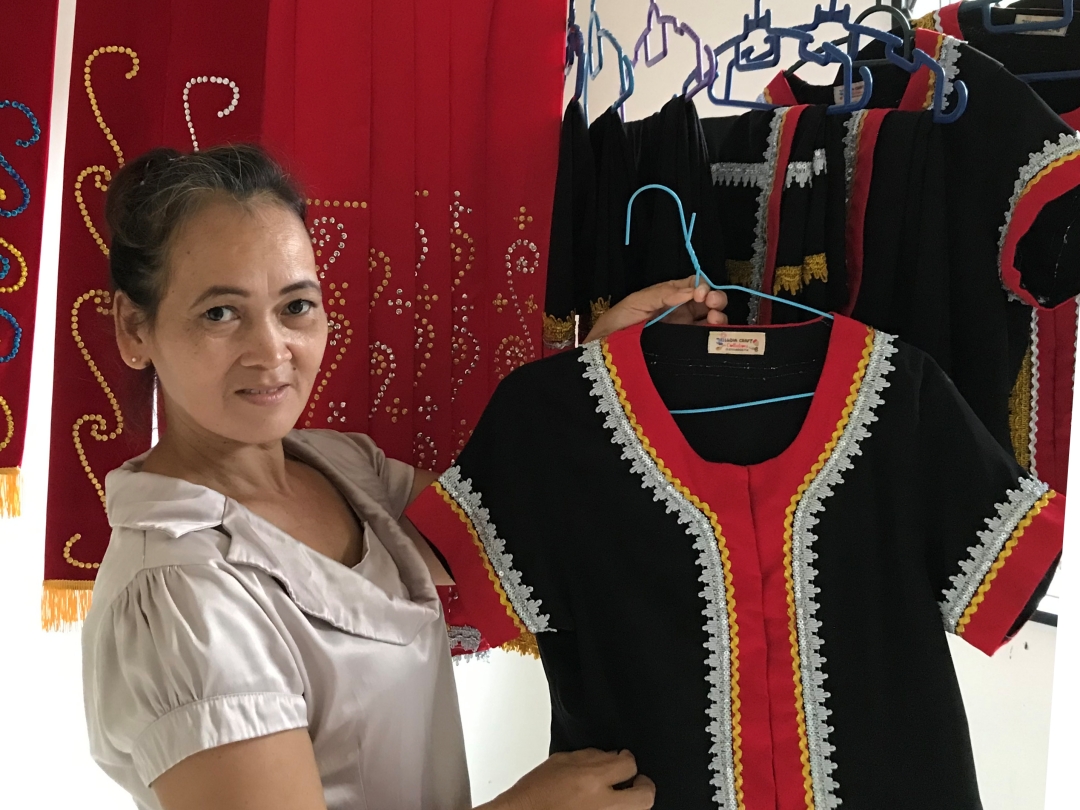 Ludia shows some of the garments branded under her Ludia Craft Collection.

IT was rather puzzling to see a collection of colourful traditional Bidayuh attire, complete with accessories, at a homestay in Long Banga far up in Northern Sarawak.

After all, it is generally known that the Bidayuh homeland lies over the southern part of the state covering Kuching, Padawan, Lundu-Sematan, Bau, Serian, Tebedu and a few pockets in Sri Aman.

So it was a surprise to see the garments – identifiable with the key colours of black, red, white and yellow – shown by Ludia Apoi at her Bileng Lemdin Homestay in Long Banga, home of the Kenyah-Saban community.

Located just a stone-throw away from the Sarawak-Kalimantan border, Long Banga is a small village with about half of its population comprising the Kenyahs, an ethnic group under Orang Ulu racial category; and the Sabans constituting the other half.

It used to house an army camp during the Confrontation in the 1960s.

Long Banga is where Ludia has been making the Bidayuh traditional dresses since 2002 – an operation that has now transitioned into an online business.

The 48-year-old woman also wears other hats – apart from running a homestay and being a dressmaker, she is also a tour guide and a farmer. 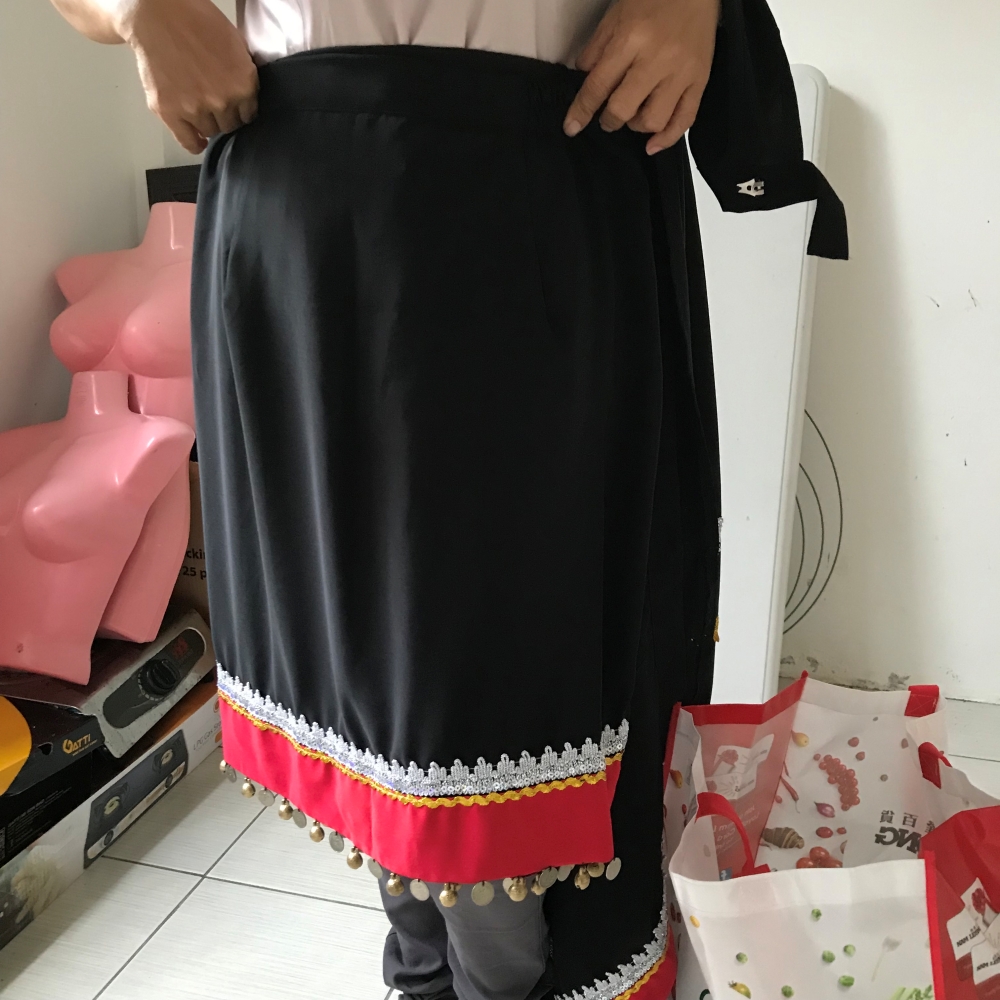 The skirt of a traditional Bidayuh women’s attire is called the ‘jomuh’.

The homestay is where her guest can see her finely-tailored work – she has specifically allocated a display room where several mannequins ‘don’ the traditional Bidayuh dresses.

During my recent visit, I managed to count 10 mannequins and also, I could see that each dress had its own distinct, yet subtle, workmanship.

Asked what struck her into loving the Bidayuh traditional dress, Ludia said it all began when she took part in a government-sponsored tailoring course in Bau back in 2002.

“I was interested in sewing and a friend introduced me to that course.

“As a young school-leaver, I did not know much then, but I really appreciated the chance, so it was no problem for me to undergo the course in Bau.

“When I received the diploma, it was unbelievable – such thing never, ever crossed my mind when I was young, because we just could not afford it.

“My parents were farmers and they could not support me to further my study.

“But I really wanted to learn a skill, so I gathered my courage and left for Kuching.”

Looking back, she said that decision paid off, as her Ludia Craft Collection is now a successful venture.

“I have received great promotional support from many parties, including the photographers throughout these series of roadshows.

“Also, I’m fortunate to have been given the opportunity to learn from my fellow craftsmen and craftswomen over the years.”

Ludia is able to make up to 15 sets of Bidayuh costumes a month, depending on the occupancy level at her homestay, which she jointly operates with her husband Ujai Jalan, 49.

“If we had many guests, then I would be making fewer dresses.” 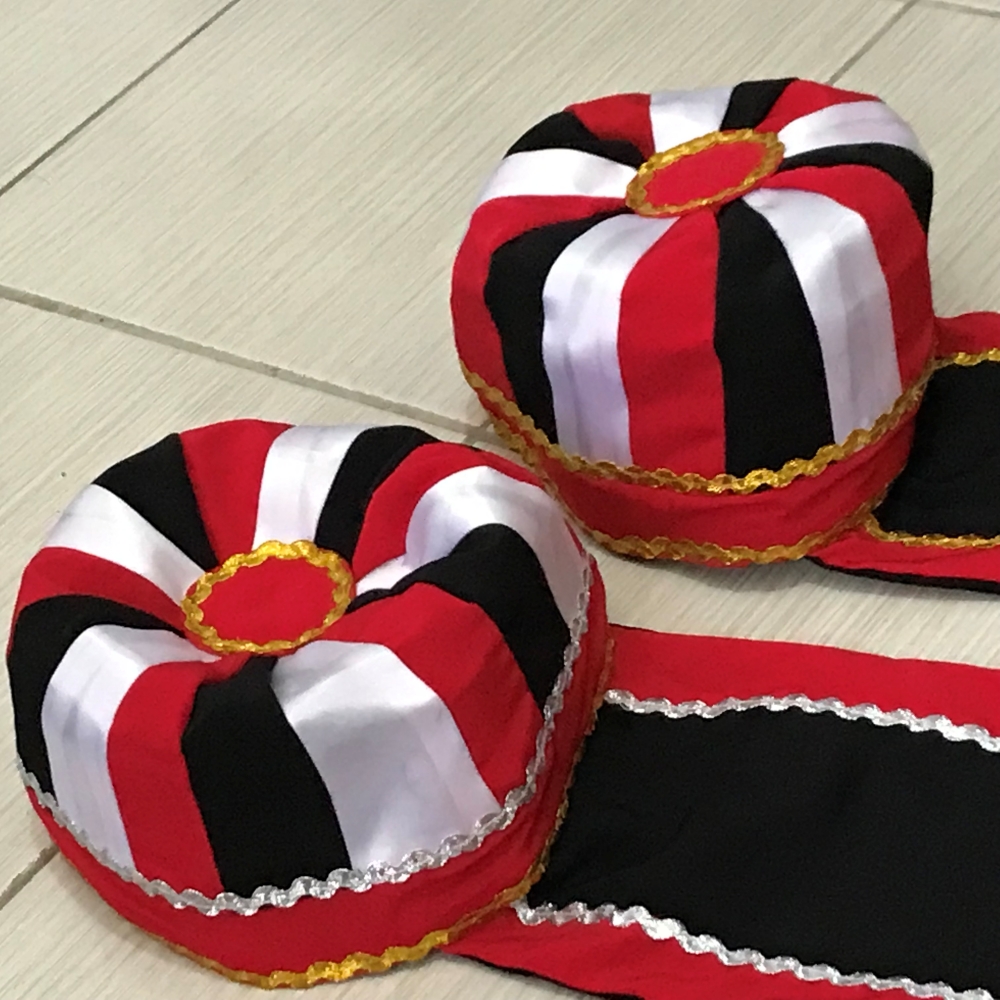 The traditional Bidayuh women’s dress is never complete without its cap, called the ‘sipiah’, identifiable with its long backflap in the signature colours of black, white and red.

On her online business, which was set up in 2013, Ludia said it was a bit a bit of a challenge at first because the Internet connectivity in Long Banga back then was ‘near to nothing’.

“Now, the WiFi coverage here is excellent. My online business has been running smoothly over the past few years and it has been a rewarding transition,” said the multi-talented entrepreneur, who also sews regular garments like Baju Kurung.

When it comes to handling the tours as part of her homestay offerings, Ludia is very hands-on. The sprightly businesswoman enjoys taking her guests out for a tour around the village, bringing them to trek along the trail leading to the water falls, and treating them to a boat ride along the Banga River.

Just like her Bidayuh dress business, her homestay packages are also being promoted online.

Officially established by her husband in 2016 after having attended a homestay operators course conducted by the Ministry of Tourism, the Bileng Lemdin Homestay is basically a large house, conceptualised to highlight the spirit of ‘a big family living under one big roof.

Boasting five spacious rooms, with the largest able to accommodate up to 10 guests, the house has shared bathrooms with the water supply deriving from Banga River, as well as a huge kitchen with adjacent dining room that can comfortably sit 40 people.

Ludia takes care of the food for her guests, but they can also opt to do their own cooking.

“Whenever I have more guests, my relatives would come down and help.

“Quite often, we would arrange for demonstrations on how to prepare ‘lemang’ (glutinous rice cooked in a bamboo), smoked fish and other traditional local dishes.

“I have this vegetable dish that I often share with the guests – a mix of papaya leaves and tapioca leaves.

‘She wears farmer’s hat too’ 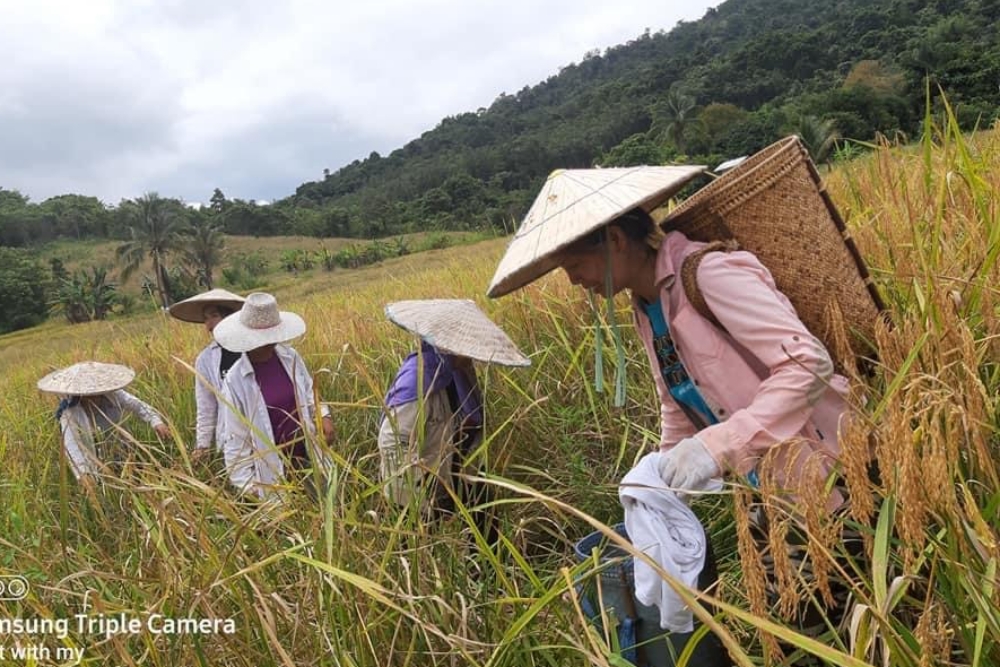 Ludia and fellow womenfolk of Long Banga carry out harvesting work together.

Ludia is a padi farmer too – a trade inherited from her parents.

In Long Banga, the spirit of ‘gotong-royong’ (communal work party) is still strong.

“We do harvesting together, and the yield is more than enough for our own consumption, allowing us to also sell our regular and hill rice.

“Occasionally when the guests go holiday during harvesting season, we would bring them to the fields and invite them to reap the harvest with us.”

Over the years, Long Banga has transformed itself from a quaint Kenyah-Saban settlement into a thriving community that enjoys good facilities amidst tranquil rural setting.

All these can be attributed to the improvement of connectivity.

For Lydia, this means that whatever sewing supply that she needs can be transported via plane.

“There are now flights to Long Banga from Miri, twice a week. At times, I would travel to Miri using my husband’s pick-up truck. Either way, it’s very convenient now.

“With flights too, I can easily courier the orders to the customers.”

“I’m very happy to have my son here with me. He attends a good primary school, and is taught by excellent teachers.

“My village now has prospered over the years – thanks to the road. Now, Long Banga is one of the rest-stops for off-road travellers going to and coming from Bario.

“There are also shops here that supply food, cooking gas and petrol.”

Things seem to be going well for Ludia and her family.

When asked what she would be looking forward to in the near future, she replied: “I would love to be a part of Kraftangan Malaysia’s exhibitions again.”