Tuesday, July 5
You are at:Home»Business»APAC economy continues to show resilience 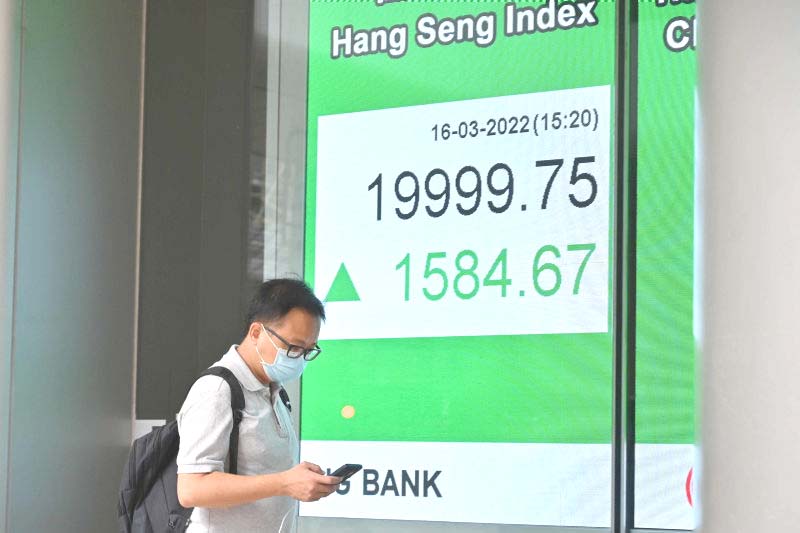 The economy of the APAC region continues to show resilience in the face of inflation caused by sanctions on Russia, goods and commodities shortages after the invasion of Ukraine, as well as local shutdowns in China due to the republic’s zero-Covid policy. — AFP photo

KUALA LUMPUR: The economy of the Asia-Pacific (APAC) region continues to show resilience in the face of inflation caused by sanctions on Russia, goods and commodities shortages after the invasion of Ukraine, as well as local shutdowns in China due to the republic’s zero-Covid policy.

Moody’s Analytics in a note today said China’s economic indicators for May illustrated some potential for this resilience as foreign trade rebounded, rising nearly 17 per cent year-on-year (y-o-y), a solid improvement over the 3.7 per cent y-o-y growth in April when lockdowns and logistics tie-ups were at their peak.

It said China’s imports also rose in May following two months of no change, illustrating some improvement in domestic demand and demand for intermediate production goods, while the country’s industrial production rose modestly following a sharp downturn the month before.

“India’s export growth held steady through May, but imports surged because of high commodity prices, hurting the trade balance. Inflation also eased in May, though it remains at a very high seven per cent over the year and above the Reserve Bank of India’s (RBI) target range.”

In Japan, it said early indicators for May showed some improvement with monthly export growth at 2.4 per cent, the strongest read since November.

By contrast, Japan’s exports to Asia excluding China have been robust, a function of both the weakening yen and economic stability across much of the region, it added.

“Indeed, as Japan is taking the brunt of supply-chain disruptions, much of the rest of the APAC region continues to be supported by exports. Malaysia and Indonesia are being boosted by prices for palm oil exports, while Malaysia is also benefitting from its crude oil exports.

“This is despite Malaysia’s temporary ban on processed chicken exports and Indonesia’s experiment with an export ban on palm oil, which recently was softened to a requirement to honour domestic market obligations.

“Vietnam’s diverse array of export markets and products, the latter ranging from clothing through to electronics, sits behind its resilient export trade,” Moody’s Analytics shared.

However, it said there are still reasons to be cautious, particularly in the near term for China and India.

China’s manufacturing purchasing managers index (PMI) remained below the neutral value of 50, due in part to uncertainty about the near-term outlook for domestic and export orders.

Despite a rapid rise in the M2 money supply in April and May and a rise in May of new yuan loans, reflecting recent monetary and fiscal policy stimulus measures, China’s retail sales remain weak and consumer confidence is low amid a soft labour market, it said.

On another note, it said India’s inflation remains very high at seven per cent and the RBI raised its benchmark repo rate by 90 basis points over the May and June period.

“As in China, consumer spending is slow and industrial production modest but showing some recent improvement. There is a good chance that the RBI will continue to try to staunch inflation with rate increases, which could put consumption and production at risk.”

Moody’s Analytics said the greatest risk to the outlook is the need for APAC central banks to carefully calibrate policy normalisation so as not to raise rates too fast and staunch economic growth, nor raise rates too slowly and risk capital outflows and currency depreciation as the spread with US and European interest rates widens.

“Aside from China, which is countercyclical with its stimulus policy, and Japan, which is a cyclical as the Bank of Japan keeps its low-interest-rate policy unchanged, nearly all APAC countries have initiated monetary policy normalisation,” it said.

Although topline consumer price inflation varies from a relatively low 2.1 per cent in China to seven per cent in India, food inflation is more uniformly high and is likely to rise further as high fertiliser and transport costs flow through to final food prices.

“Export bans or caps on wheat, sugar, chicken, palm oil, and other food commodities are further distorting markets in the region.

“If producers cannot sell products at global prices while paying global input prices on fertiliser and other imported inputs, the risk is that food commodity export caps could see production ultimately fall rather than rise,” it said.

Moody’s Analytics said there is a good chance that global crude oil prices will not rise further this year as prices have fallen from their peaks of about US$120 per barrel for both Brent crude and West Texas Intermediate in the immediate aftermath of the European Union decision to elevate sanctions on Russian crude and natural gas.

“Global energy prices may not directly exacerbate the inflation of fuel, electricity and transport prices.

“But they will remain high, and food inflation may continue to rise until energy prices are fully woven into food production. Further driving food inflation will be the difficulty in finding alternative sources for wheat, edible oils, and other food commodities that previously came from Russia or Ukraine,” it shared.

Moving forward, it said the mixed signals across the APAC countries, and across the components of their export and domestic economies, have driven some changes to the near-term economic outlook across the region.

“Most of the estimates for 2022 growth have been pulled down to reflect risks from high inflation and rising interest rates. The outlook for China for 2022 has been revised down to 4.5 per cent from the previous 4.9 per cent.

“The growth rate for India in 2022 has been raised to 7.5 per cent from 7.2 per cent in the May baseline. It is well below the 8.7 per cent rate in the February baseline forecast, which preceded Russia’s invasion of Ukraine.

“Expectations for the Japan economy have been lowered consistently since February. June forecast of real Gross Domestic Product (GDP) for 2022 is now 1.6 per cent. This incorporates the GDP decline reported for 2022’s first quarter as well as expectations that public and private investment spending will remain weak,” it said.

Meanwhile, it added that within Southeast Asia, the GDP outlook for Malaysia and the Philippines has strengthened as first-quarter GDP growth was much stronger than expected, with domestic consumption growth accelerating faster than expected amid easing social distancing rules while exports had been supportive as elsewhere in the region. — Bernama