Monday, August 15
You are at:Home»News»Sabah»Calf dies after leg amputated 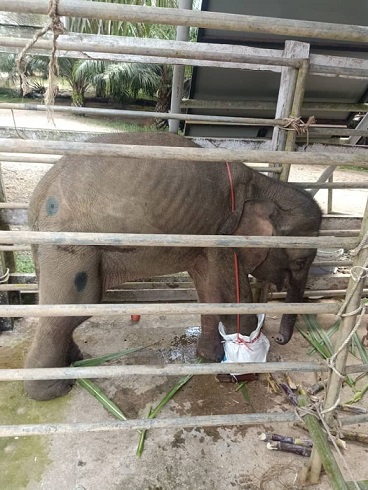 The condition of the baby elephant after the surgery to remove the lower part of her right leg.

KOTA KINABALU (June 22): The baby elephant that has its right lower front leg amputated recently due to an injury caused by a snare has died.

“After my statement concerning the baby elephant that was injured due to the snare and the lower part of her right leg was amputated, the baby elephant was then treated by the veterinarian on the morning of June 20. After removing the leg, the baby elephant showed good development. It looked healthy and was eating and drinking like a normal and healthy elephant.

Post-mortem was carried out on June 22, he added.

“Results from the post-mortem found that the cause of her death was due to the failure of important organs such as her heart, lungs due to bleeding in her intestines and stomach. This is the result from the infections caused by the injury due to the snare.

“Although the veterinarian treated her wounds as best he could, I am saddened by her condition that led to her demise.

“I hope that such injuries and death will not recur in the future. I am urging all members of the community in Sabah to stop the setting up of snares that is against the law to avoid injuries and death to wildlife, especially endangered ones such as the elephant,” he said.