Wednesday, July 6
You are at:Home»Sports»Sarawak pullers reflect on lessons from AFA Asia Championship 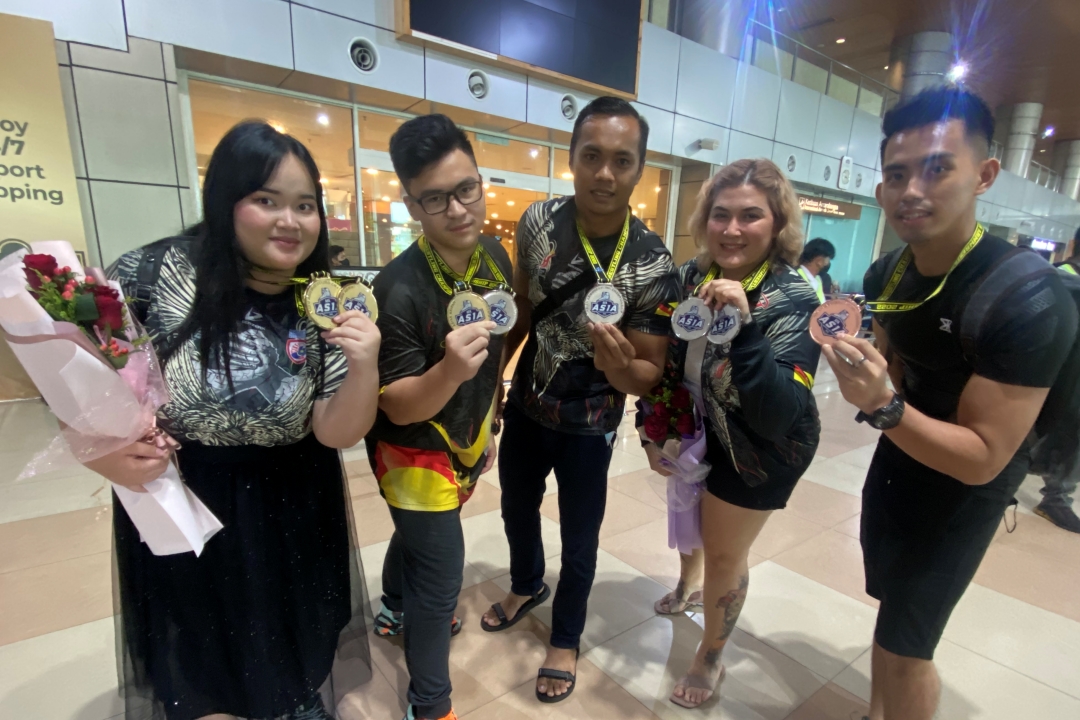 Dominic (right) and (from left) Abigail, Acho, Jong and Tracey show their medals at the KIA arrival hall on Monday.

KUCHING (June 22): The AFA Asia Armwrestling Championships at Paradigm Mall in Petaling Jaya, Selangor from June 18 to 19 provided valuable experience for the 11-member team from Sarawak, especially the junior pullers.

This is according to coach Dominic Johnny who said the pullers learned a lot from competing with champion pullers from India, Vietnam, Singapore, Indonesia and South Korea.

“We have learned a lot from the mistakes made at this competition and, from this experience, the pullers will be more ready for future competitions and not commit the same mistakes.

“We have also managed to overcome all odds especially to meet the weight requirements for the respective categories. The successful weight loss for the pullers was the first victory for us and the second victory was at the meet,” he told reporters at Kuching International Airport on Monday.

Out of the 11 pullers from Sarawak representing Malaysia, 10 managed to contribute six gold, 11 silver and two bronze medals for the country.

Dominic singled out Acho Prince Kee Zing Yang for praise after the junior puller bagged one gold and one silver in his first appearance in the tournament. Jong Chi Joon was expected to win a gold but lost due to “some errors in the final,” he added.

“I gained a lot of skills and techniques from the Singapore team and they are very smart. I got to fight with pullers from outside the country and it was really fun, said Acho, who dedicated the gold (Right Hand) to his mother Nommi Pengiran who passed away last year.

“I actually expected more contestants, the Indian pullers came so I expected a lot of tough opponents. However, I am happy that I won two golds in this meet,” said Abigail who is currently undergoing an Animation and Illustration course at Lasalle College Of The Arts in Singapore.

Tracey Edwina Hughes, who won two silvers in the Senior Women Above 78kg Right Hand and Left Hand, was glad she could overcome the odds.

“It wasn’t easy for me to attend the training sessions because I was working so every day I would train for at least one and half hours after work. The intensity grows as the competition gets nearer.

“I feel lucky and grateful to have a very supportive husband who has played a big role in my success in this sport,” she said.

Chi Joon, who managed a silver, is now looking forward to the National Armwrestling Championship in November.