Wednesday, July 6
You are at:Home»Advertorial»Daya Singa continues to roar in O&G industry

IN 1986, a Singapore-based company had to close its operations in Miri, Sarawak following a global oil price collapse.

The company supplied marine, lifesaving, safety, and Chubb fire-fighting equipment. They also maintained RFD Inflatable Liferafts and breathing apparatus to an oil major in the town.

When three good friends Chia Chan Shin (deceased), Manan Aran and Ali Abdul Rahman heard that the company was up for sale, they decided to acquire it. So, in February 1986, the company was renamed Daya Singa Sdn Bhd. 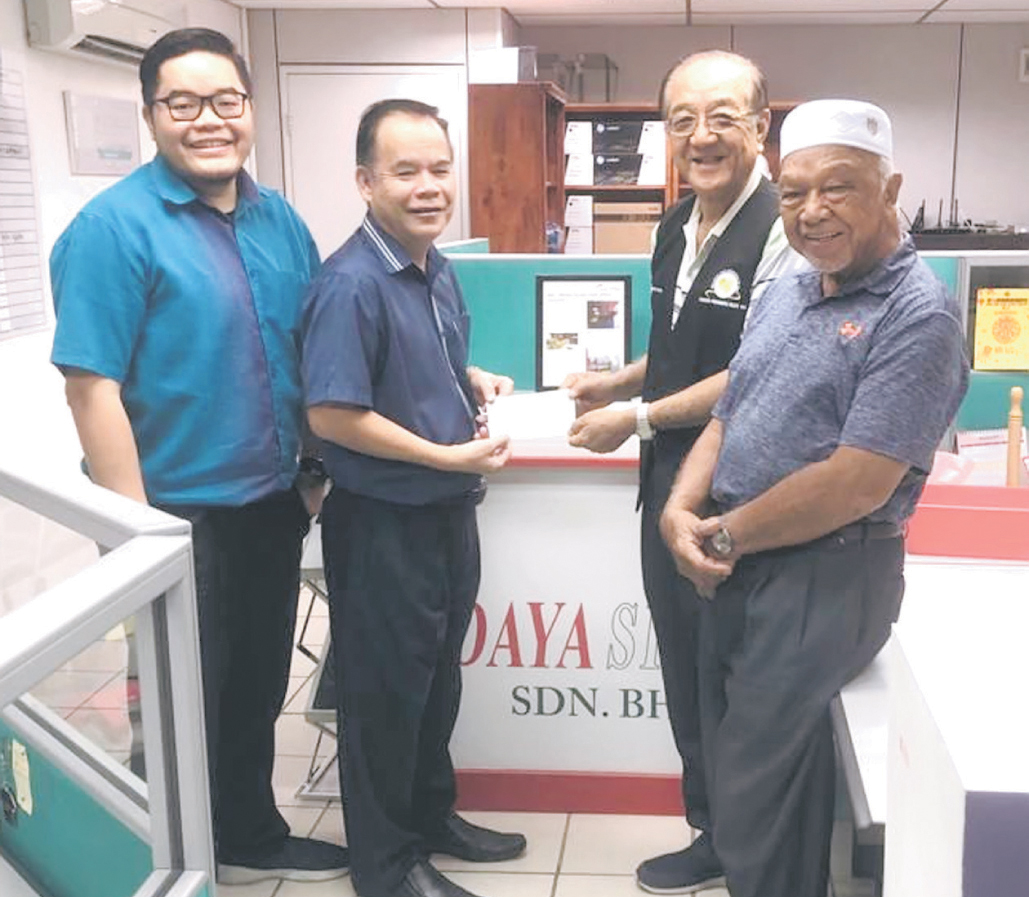 (From left) Melvin, Manan and Ali (right) during the presentation of financial assistance to Miri Palliative Care Association.

“The name Daya Singa basically meant ‘a lion full of energy’,” said Ali, who is the company’s chairman, in a recent interview at his office in Miri.

“After the acquisition, we continued to focus on the same business model. Some of the previous employees were also absorbed into Daya Singa. We had a staff of seven when we started, and our main client at that time was Sarawak Shell,” he added.

When Petronas Carigali Sdn Bhd became more active in exploration and production activities in Miri waters in the early 1990s, Daya Singa was engaged to maintain the fire-fighting equipment as well as RFD Inflatable Liferafts of their offshore installations.

“Today, Petronas Carigali is one of our biggest clients. Our business sustainability relies on our business with them,” Ali said.

Daya Singa is currently the market leader in the maintenance of lifesaving and evacuation equipment, distribution and supply of safety equipment, fire-fighting equipment and miscellaneous hardware to the oil and gas industry in Sarawak. Apart from Petronas, its other clients include Dayang Enterprise Holdings Bhd, Petra Energy Bhd and Sapura Energy Bhd. 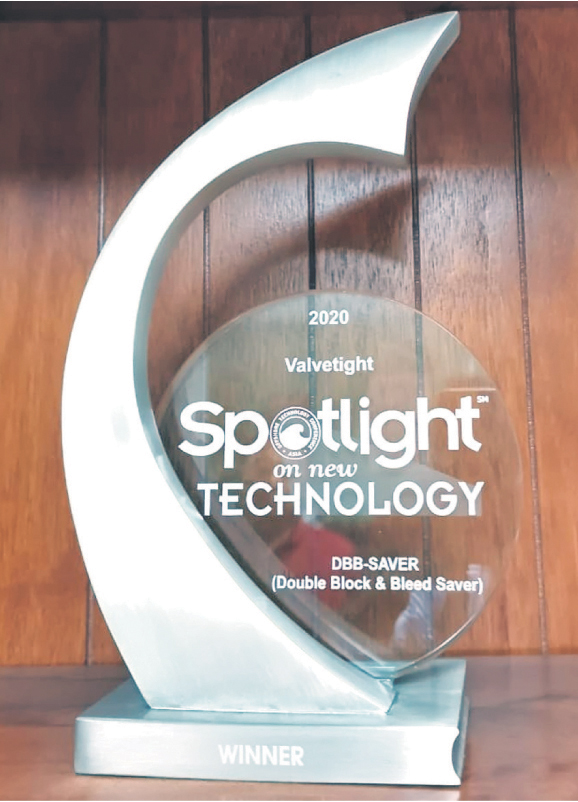 The Valvetight DBB-Saver product won the Spotlight on New Technology Award in 2020, securing the green light for commercialisation.

The collaboration resulted in the development of a new product category – the Corrosion Resistant (CR) Series Fire Extinguishers.

Jonathan said the initiative made it possible for Malaysian oil and gas companies to source for cheaper, but high-quality, fire extinguishers designed and engineered to counter hydrocarbon-related fires as well as offshore helideck firefighting.

Recognised for their good performance in health, safety and environment, Daya Singa received the Sarawak Asset Outstanding Vendor Award by Petronas Carigali in 2018. 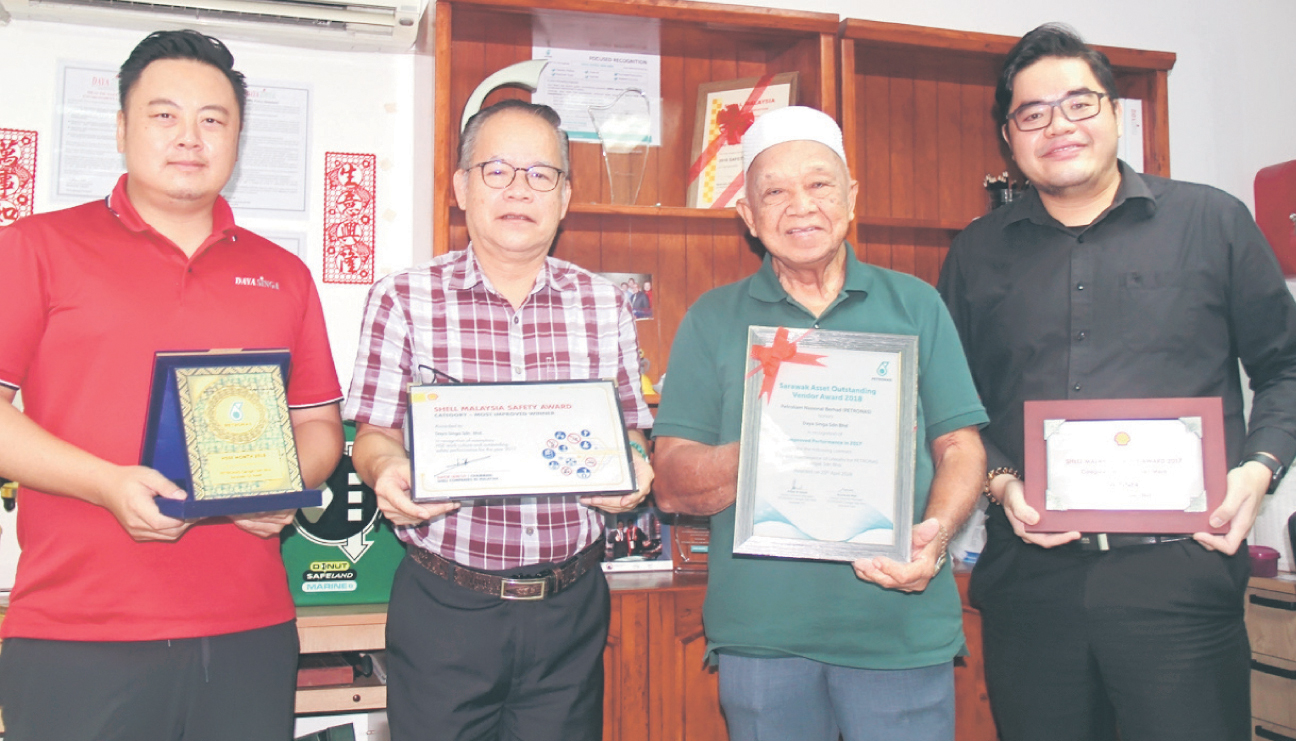 (From left) Jonathan, Manan, Ali and Melvin show some of Daya Singa’s accolades.

It has not always been plain sailing for the company in withstanding challenging industry headwinds over the years.

However, the Sarawak Government’s new oil and gas policy enforced since 2016 has helped small and medium enterprises like Daya Singa to survive the storms and hiccups in the oil and gas industry.

Jonathan said: “We managed to pull through past economic recessions and oil price crashes and are thankful to the Sarawak Government for putting emphasis on Sarawak content and localisation for SME contractors in the O&G segment. We are hopeful that the Sarawak Government will continue to champion the interests of local companies.” 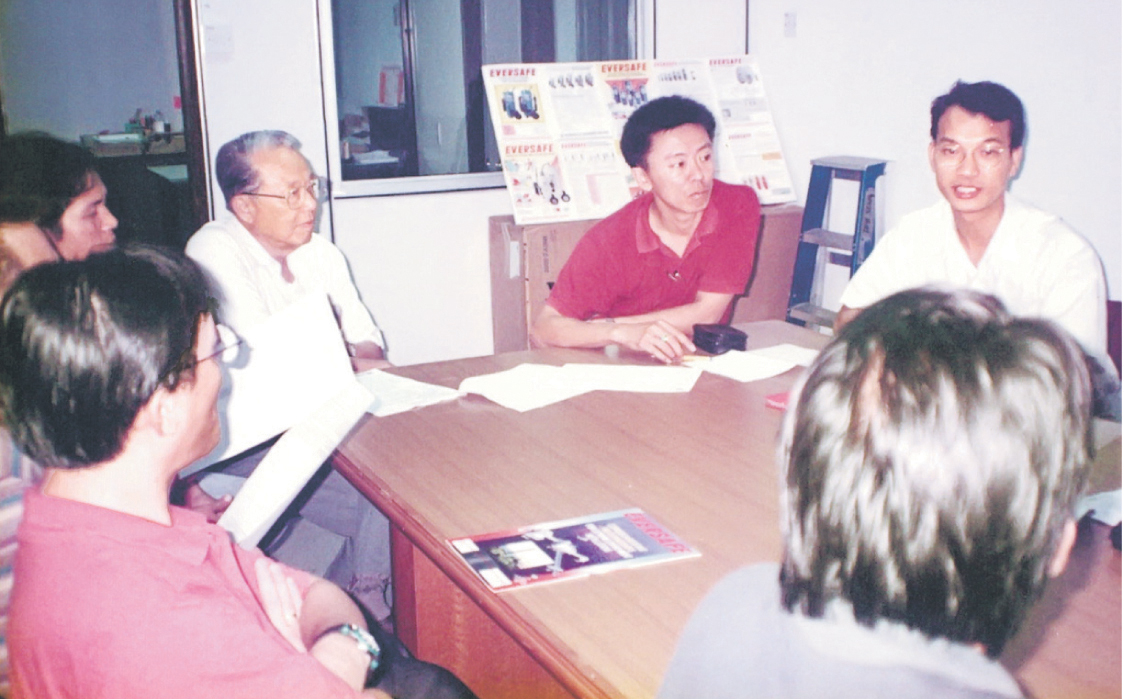 FRUITFUL COLLABORATION: The late Chia Chan Shin (second left) listening to a brieﬁng by oﬃcials from Eversafe Extinguisher Sdn Bhd for the CR Series Fire Extinguisher for the oil and gas industry.

Looking ahead, Jonathan said the company will continue to explore innovative solutions for the safety segment of oil and gas industry.

“We are the regional service agent for a Dutch technology that creates isolation for passing valves. This solution, the Valvetight Double Block and Bleed Saver (DBB-Saver), was successfully approved for commercialisation via the Innovation Gateway@ PETRONAS in 2021.

“Following this, we were approached by the PETRONAS Project Delivery & Technology (PD&T) team to consider reach out to their Operating Units in Malaysia. Now that the country is in an endemic phase, we are actively introducing this technology to the end users,” he said.

As this technology has been acclaimed by Shell Global as a ‘Potential new World Standard in Safe Isolation of Valves’, Daya Singa is looking forward to being considered under the Petronas’ Vendor Development Programme (VDP).

Daya Singa chairman Ali said the homegrown company has come a long way, and he has good vibes that it will continue to grow with sound management and well-trained staff.

“We started from scratch, and I am fully confident that the company will continue to develop, hopefully not only in Sarawak but abroad,” he said.