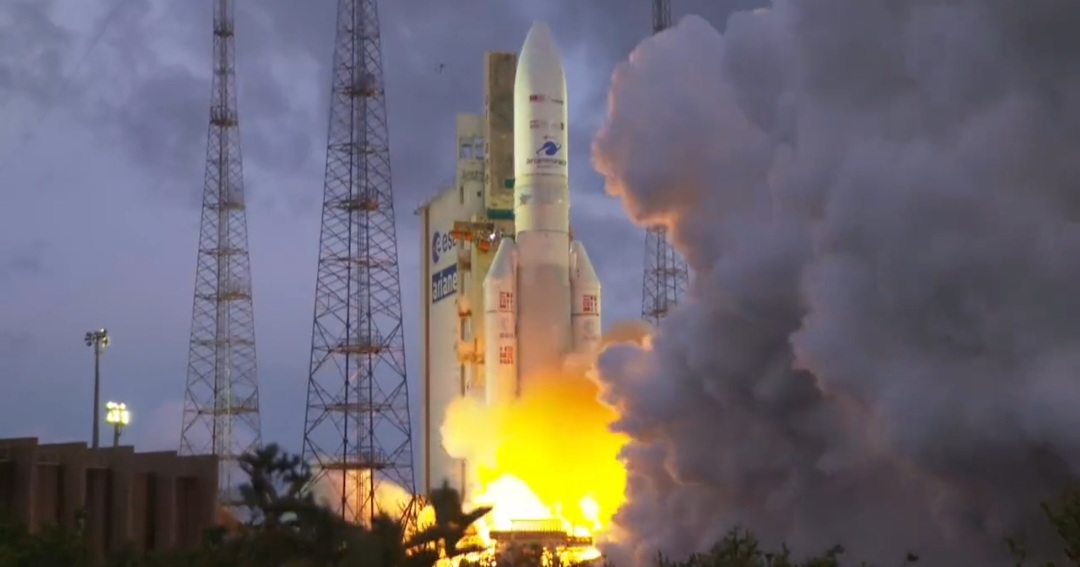 A screen grab shows the satellite launch at the European Space Port today on the Ariane 5. — Screengrab from Twitter/Arianespace

The satellite sent its first signal 50 minutes after it was launched to orbit today.

“It is high time that we do something to help improve the internet quality and connectivity in Malaysia, especially East Malaysia. That is why we launched this satellite,” Measat chief operating officer Yau Chyong Lim said following the launch here.

He said Measat looks forward to working with more internet infrastructure developers in Sarawak and Sabah.

“We cannot do it by ourselves. Even though with the Measat-3d now in orbit, to improve internet quality in Malaysia, we need the help of others as well,” he said.

Prior to the launch, Yau said Measat-3d supports the National Digital Network Plan (Jendela) to offer wider coverage and a better broadband experience.

He explained that the satellite, which cost about RM1.2 billion, is expected to enable Malaysians to enjoy high-speed internet whether in urban and suburban areas or in villages far inland through broadband services, under the Measat ConnectMe Now service.

“Measat-3d, which uses High Throughput Satellite (HTS) capacity, will also support the country’s transition to 5G technology by offering internet speeds of up to 100Mbps in rural areas,” he said.

According to him, Measat ConnectMe Now will connect 10,000 sites over the next three years, benefiting more than two million people in rural areas who currently have no or limited access to high-speed broadband internet.

Measat-3d will also fill the broadband gap in many areas without 4G, 5G, or fibre coverage in Malaysia.

“We fully support the government’s intention to achieve 100 per cent internet access target by 2025 and also to digitise the whole country,” said Yau.

Measat-3d, which is the most comprehensive and complex satellite in the fleet owned by Measat to date, was built on the Eurostar 3000 satellite model by Airbus.

The satellite will complement Measat-3a and Measat-3b satellites housed together in 91.5 degrees east orbital space, replacing the old capacity and building the resilience of the Measat satellite fleet.

The new satellite will also restore overlap in orbit and provide unparalleled expansion capacity for Astro’s Direct-to-Home (DTH) services as well as broadcasting and telecommunications services in the region.

Equipped with conventional C and Ku-Band capacity and offering some of the largest video services in Asia, Measat-3d will ensure continued growth as well as services for the world’s leading DTH satellite television broadcasters and providers to over 20 million households across Malaysia, Indonesia, and India.

It also incorporates Ka-band HTS, the largest payload dedicated exclusively to local demand for internet in Malaysia, with a broadband capacity of more than 30 Gbps.

“With the new satellite, Measat would be able to increase its broadband processing capacity 10 times from the current 3Gbps to 30Gbps, thus enabling access to high-speed broadband even in limited areas or no land connection.

“High-speed Internet will be improved from the current download speed of 30 Mbps to 100 Mbps, allowing users to stream high-data content such as 4K/8K video.

“To optimise service capacity, Measat-3d is designed with an estimated lifespan of 18 years,” said Yau.

Measat-3d satellite was launched at 6.50pm local time (5.50am Malaysian time) at the European Space Port in French Guiana, an overseas region of France on the northeast coast of South America.

Apart from Measat-3d, the Indian GSat-24 satellite was also launched, with both satellites placed on Ariane 5, which carried them into geostationary transfer orbit (GEO).

The Ariane 5 is a European heavy-lift space launch vehicle developed and operated by Arianespace for the European Space Agency.