Saturday, January 28
You are at:Home»News»Sarawak»Video of burst pipe is just a leak test, Ting assures Mirians
For the freshest news, join The Borneo Post's Telegram Channel and The Borneo Post on Newswav. 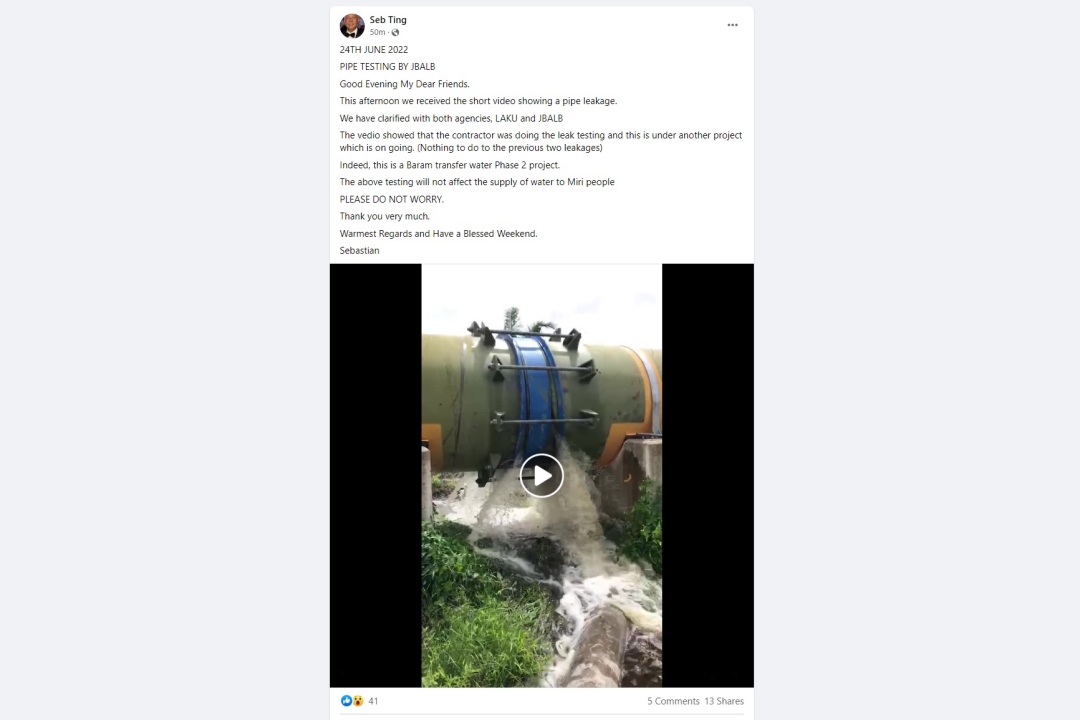 MIRI (June 24): Piasau assemblyman Datuk Sebastian Ting has assured that Miri will not be facing water cuts following a viraled video of water gushing out from one of Laku Management Sdn Bhd (Laku) pipes today.

The Tourism, Creative Industry and Performing Arts deputy minister in a Facebook post said that he had verified with Laku and Rural Water Supply Department (JBALB), explaining that it was just a leak test performed for the Baram transfer water Phase 2 project, urging Mirians not to worry.

“The vedio showed that the contractor was doing the leak testing and this is under another project which is on going. (Nothing to do to the previous two leakages).

Indeed, this is a Baram transfer water Phase 2 project. The above testing will not affect the supply of water to Miri people. PLEASE DO NOT WORRY,” he said in the post.

The video being circulated in social media has caused quite a stir among Mirians, sending many scurrying to fill up their pails and water containers for fear of another city-wide water cuts.

The last city-wide water supply disruption which started on June 16 here had caused an uproar among many Mirians after repair works on a dislocated water main got hindered by bad weather, causing many to spend their weekend with dry taps.

The broken pipe was eventually repaired on Sunday, and by Monday water supply to city folks was fully restored.

Right after that, a rumour of another burst pipe made rounds with reports made, but has been denied by Minister of Public Utilities and Telecommunication Datuk Julaihi Nawawi at a press conference after visiting the scene on Monday.

Laku also told The Borneo Post today that a complaint on the local community Facebook page of a water disruption at a home yesterday caused by another alleged water cut had been proven to be false, and the post had been taken down by the administrator.