Tuesday, September 27
You are at:Home»News»Sarawak»Sarawak Islamic Action Plan 2022-2025 out to strengthen Muslim ummah in Sarawak 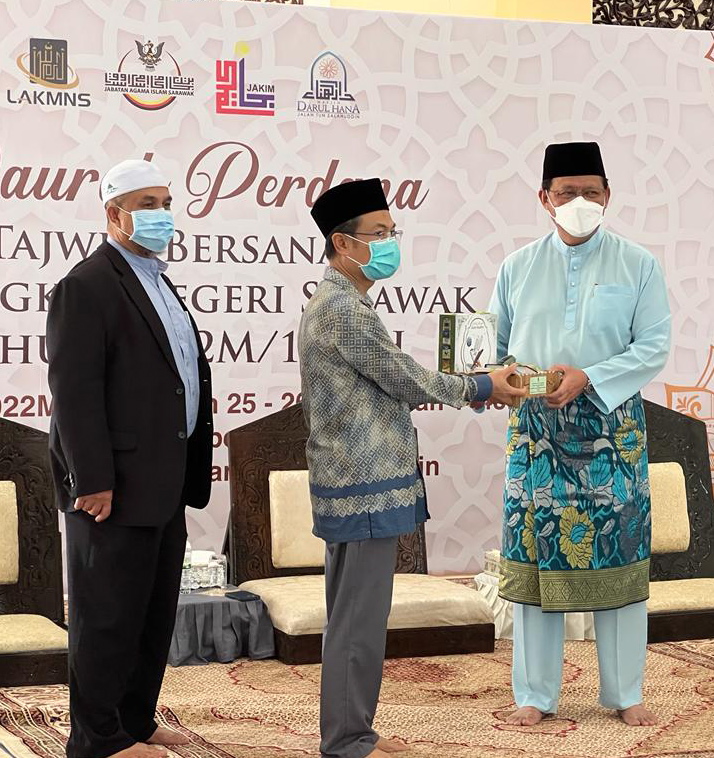 (From right) Dr Abdul Rahman accepts a memento from Khalid, as Mustapha looks on.

In announcing this, Deputy Minister of Utility and Telecommunication II Datuk Dr Abdul Rahman Junaidi said overall, the action plan wouldcover all the needs of the Muslim ‘ummah’ (society) towards the establishment of ‘khairulummah’ (the best society) in terms ofsocio-economy, culture and facilities for all.

“We should not overlook the culturalisation of Al-Quran – meaning, every Muslim should make the teachings in the Holy Book their culture that permeates through their identities.

“This will strengthen the ummah, in accordance with the law and the requirements as narrated in the Quran,” he said at the closing of state-level ‘Daurah Perdana Tajwid Bersanad 2022M/1443H’ at Masjid Darul Hana here yesterday.

The programme focused on matters pertaining to ‘sanad’ or ‘isnad’, which refers to the chain of authorities attesting to the authenticity, including the historical elements, of a particular ‘hadith’.

In this regard Dr Abdul Rahman, who is Pantai Damai assemblyman, viewed the study of ‘sanad’ as ‘an exclusive privilege for students specialising in Islamic religious affairs’.

“Islamic scholar Abdullah Ibn Mubarak had stressed ‘Al-Isnad (‘sanad’) as being a part of the Islamic faith, if it did not exist, surely anyone would say whatever he would like.

“Sanad is, indeed, the basis of the delivery and the acceptance of religious knowledge, in that it emphasises on guaranteeing and ensuring the validity and authenticity of knowledge and information in Islam – rather in line with the government’s policy of calling upon the people to obtain the right information.

“Especially in studying the Quran, ‘sanad’ is crucial because it is the only best way to affirmtruth, authenticity and reliability.

“In Sarawak context, it is highly encouraged for Muslimsto acquire knowledge and information in a ‘sanad’ manner, as recognised by the MIS, to ensure that any extremist ideology and culture could be curbed.

“It seems that the awareness of the importance of seeking knowledge through ‘sanad’ is beginning to grow,” he said.

On a separate subject, Dr Abdul Rahman said the state government, through MIS, was doing its best to elevate the progress and empowerment of Al-Quran education in Sarawak.

Back on ‘sanad’, he said its learning would give advantage to the present crop of qaris and qariahs.

“Knowing the ‘sanad’ can improve the quality of reciting and understanding the verses in the Quran, especially in terms of ‘tajwid’ (Arabic grammatical rules),” he said.