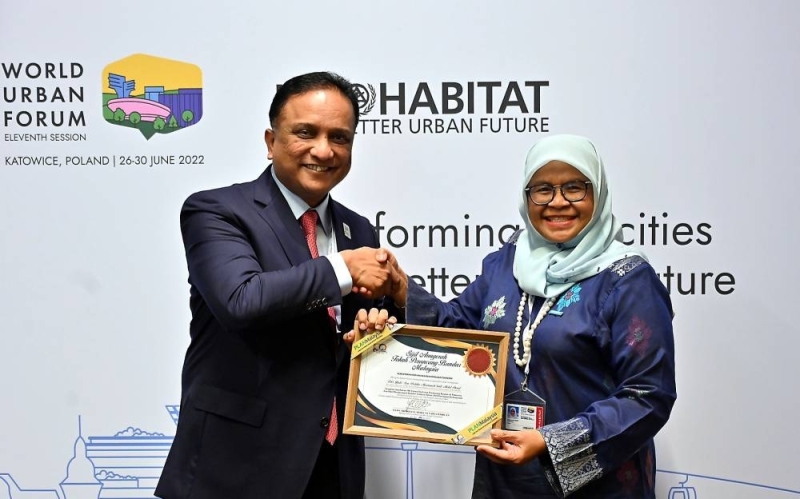 Reezal Merican (left) said the Malaysian government has been placing much emphasis on the overall wellbeing and liveability of its 32 million population. – Bernama photo

“It is a core principle in Malaysia’s pursuit of economic development and growth,” said Reezal Merican when participating in the Sustainable Development Goals (SDGs) session at the 11th World Urban Forum (WUF11) here on Monday.

Based on United Nations Human Settlements Programme (UN-Habitat) calculations, urbanisation in Malaysia is expected to reach 80 per cent by 2030.

“With urbanisation, comes poverty, overcrowding, and pollution. It is a “here and now” challenge – one that needs to be addressed collectively. This will pave the way for a better quality of life for those living today and safeguard our future generations,” said Reezal Merican.

WUF was initiated by the United Nations (UN) in 2001 to study one of the most pressing issues facing the world today namely rapid urbanisation and its impact on communities, cities, the economy and climate change.

Organised and convened by UN-Habitat, WUF is the most inclusive international gathering on urban issues that brings together representatives of national, provincial and local governments, academics, business people, community leaders, town planners and civil societies.

Reezal Merican said the Covid-19 pandemic had opened the eyes and revealed cracks, inefficiencies, and vulnerabilities inherent in the societies, and as nations locked their borders and movements between cities were curtailed, people were confined to limited spaces.

This, he pointed out resulted in a surge of mental health issues as the World Health Organisation revealed that there was a 25 per cent increase in anxiety and depression-related cases worldwide at the height of the pandemic.

“Living spaces must truly be liveable and the government need to ensure homes are suitable for stay, work, and play.

“Homes must also be easily accessible to public health facilities, with a well-connected public transportation infrastructure, with adequate green, and open spaces, and have good internet connectivity,” he said.

Reezal Merican said the Malaysian government has been placing much emphasis on the overall wellbeing and liveability of its 32 million population.

“We are also committed to realising a sustainable nation with a strong agenda for green development – as clearly spelt out in the 12th Malaysia Plan, which is the country’s five-year national development plan that spans from 2021 to 2025,” he said.

“The Liveable Malaysia agenda, which we call Agenda Malaysia Berdaya Huni is my solution for creating vibrant cities that are truly liveable and that fulfil the needs of the people,” he said. – Bernama