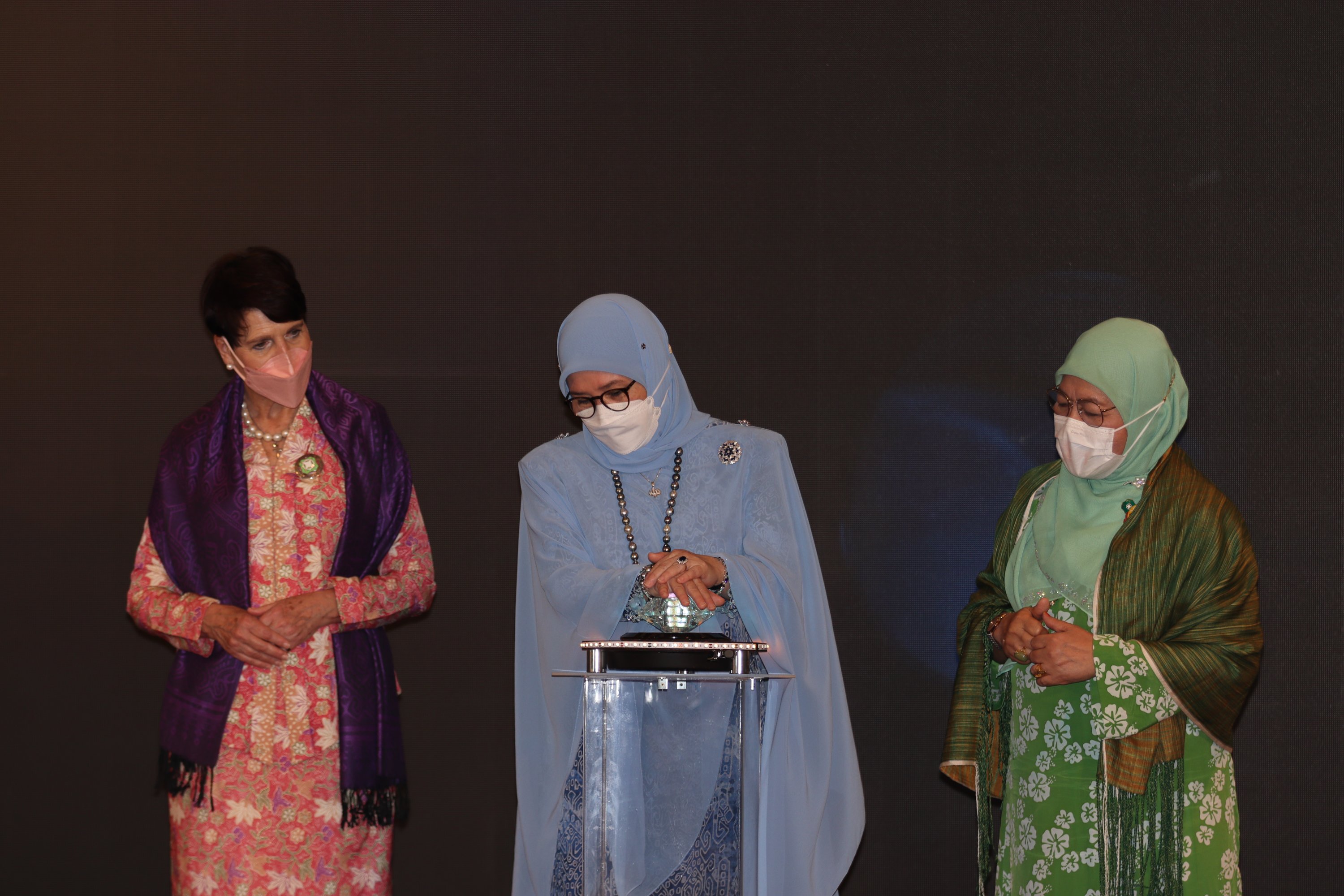 In this respect, Her Majesty observed that half of Sarawak’s 2.6 million population and equally, half of the country’s voters, consisted of women and thus, they should be entrusted to undertake major duties in the government.

“We need women’s power in establishing a government, and women should not be going out to only vote and that’s it.

“We must remember that we, women, play a major role in any government and it’s about empowering women,” Tunku Azizah said this in her opening address for the 13th Associated Country Women of the World (ACWW) Area Conference for Southeast Asia and the Far East, at a hotel here today. 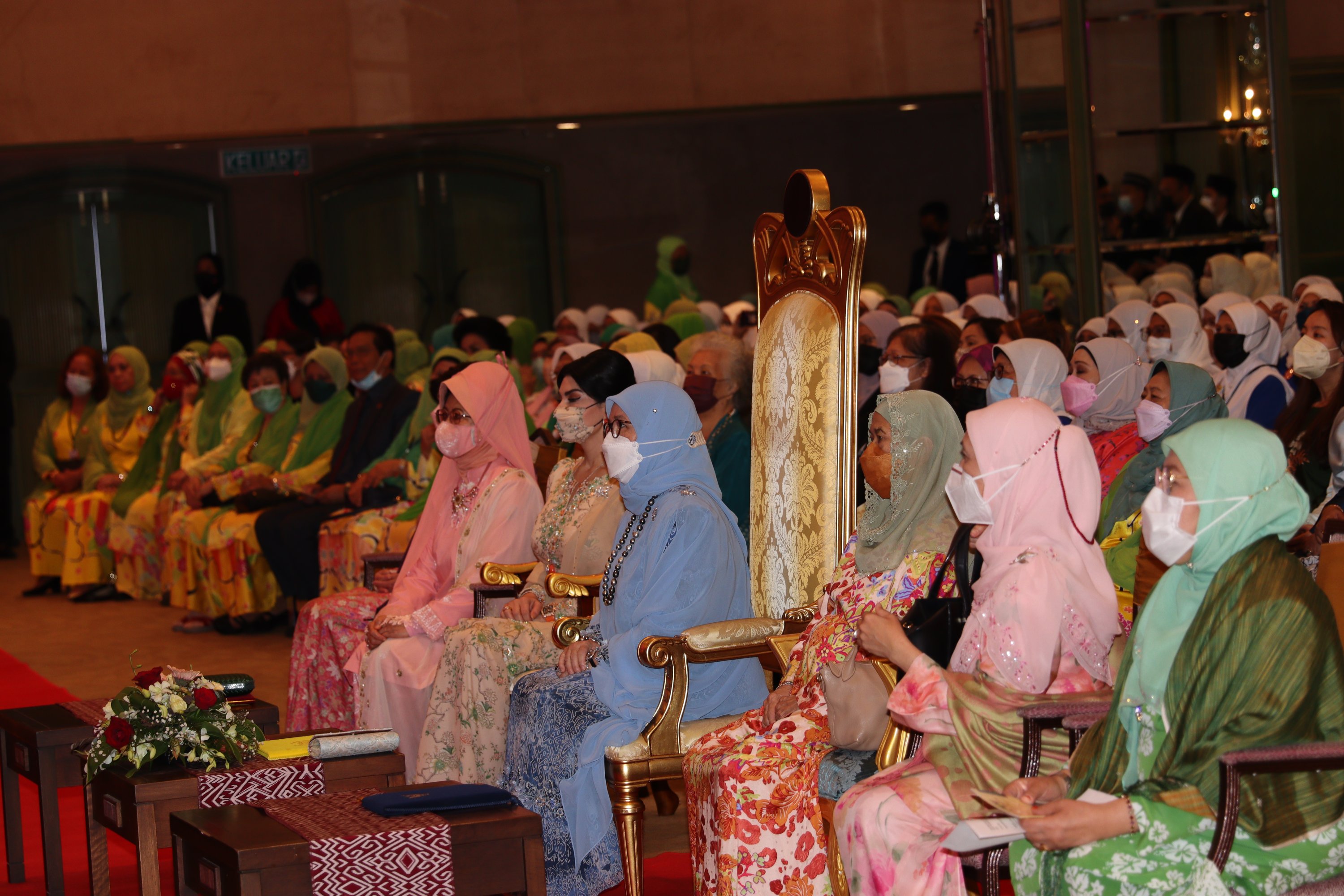 Tunku Azizah, sitting between Raghad (front, second left) and Juma’ani, witnesses a presentation on stage as part of the conference’s programme. With them are (front, from left) Fatimah, Hayati and Norjanah. — Photo courtesy of Sarawak Public Communications Unit

Her Majesty also thanked the Sarawak government for sending the state’s cultural troupes to perform at Istana Negara during a royal banquet last week, adding: ‘The King and the rulers were mesmerised by the performance’.

Tunku Azizah also said it was her third time gracing an ACWW area conference since 2004, and she expressed thanks to the state government for sponsoring to host the conference this time round.

Premier of Sarawak Datuk Patinggi Tan Sri Abang Johari Tun Openg, who attended the event virtually, regarded Her Majesty’s presence as ‘an inspiration for the women in the state to be proactive in dealing with issues affecting their social development’.

“I would like to congratulate the Sarawak Federation of Women’s Institutes (SFWI) for hosting this conference, which is the fifth hosted by the institute – an amazing achievement of our Sarawak women,” he spoke in a pre-recorded video message broadcast at the event yesterday.

Abang Johari said the conference’s theme this year, ‘Diversity is Our Strength’, reflected state’s diversity of having over 26 ethnic groups, each having its own distinctive culture and traditions.

He also pointed out that the state government had rolled out various initiatives and assistance programmes to support women towards developing their capacities and competencies.

“Those in women’s NGOs (non-governmental organisations) are very talented and agile in helping to accomplish Sarawak’s development goals.

“You can reach the most vulnerable or disadvantaged people in our community and find innovative solutions to tackle problems,” said Abang Johari.

“We are most happy that Her Majesty is gracing our conference, (as) this is indeed very meaningful and significant for women in Sarawak.

According to her, the conference’s goals are to build networks and form collaborations with women from within and outside the country, as well as to encourage knowledge-sharing through its plenary and educational visits.

“The SFWI-ACWW conferences highlight significantly that women, irrespective of their localities or countries, can in fact assist each other in the field of education, environment, technology, societal advancement and leadership positions,” added Norjanah.

International delegates at the conference included those from Brunei, Cambodia, the Philippines and Singapore.