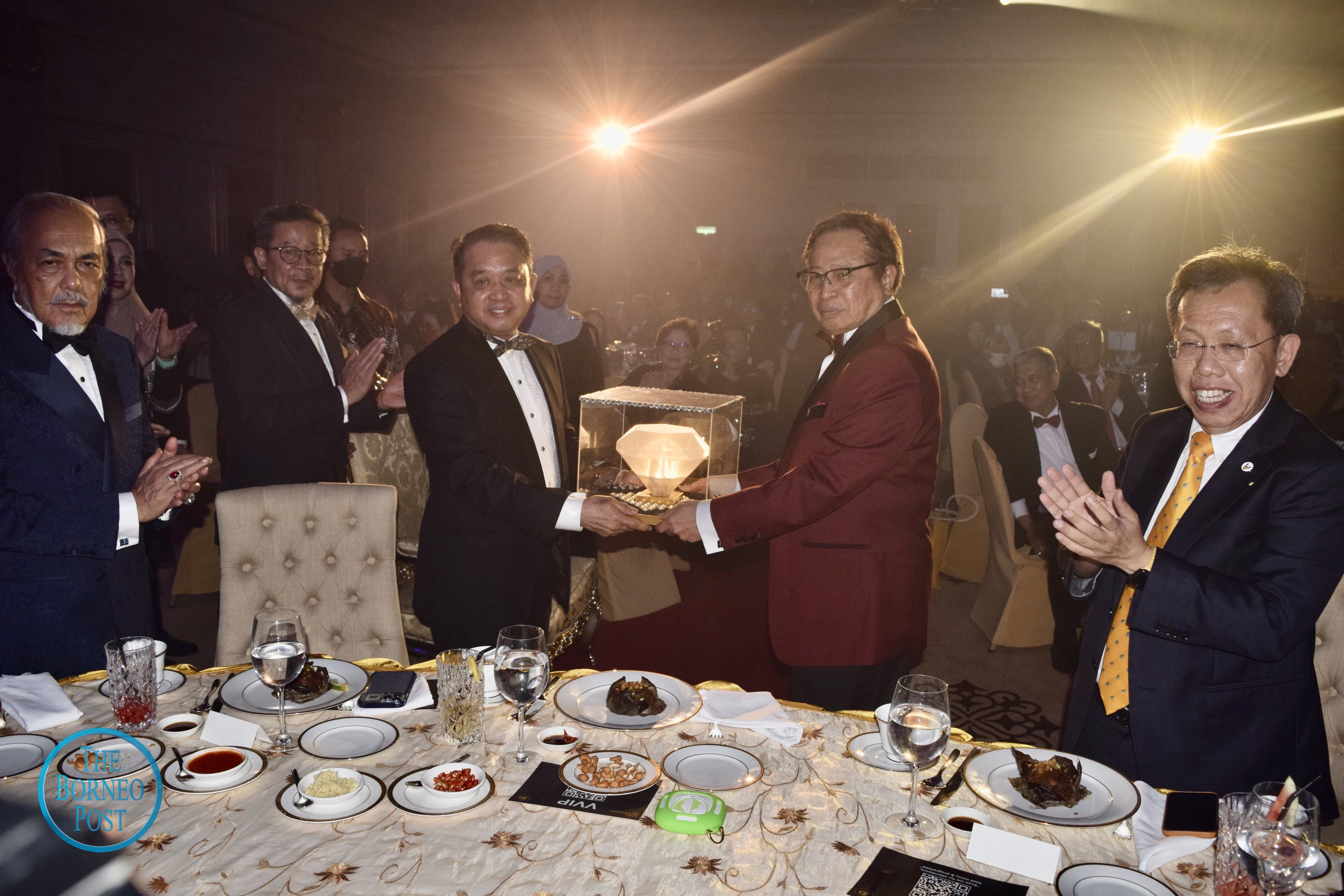 Abang Johari (second right) receives a replica diamond from Abdul Aziz. They are flanked around the table by Asfia (left) and Dr Sim. – Photo by Roystein Emmor

He said SEDC’s board had approved the implementation of The Diamond Project transformation plan last year to enable the corporation to meet the challenges of transforming Sarawak into a developed state by 2030.

“We have to change the way we explore new business opportunities, be creative and innovative in this complex and ambiguous economic landscape, and above all be brave in taking calculated risks in venturing into new unknown frontiers,” he said during SEDC’s 50th anniversary dinner last night.

He said since its establishment on March 1, 1972, SEDC has witnessed numerous changes in top management, who have each left an indisputable legacy on the economic development of the state, including the iconic Darul Hana pedestrian bridge and the Kuching Waterfront.

“This year I have completed over five years of service as the chairman of SEDC and I can say that I am extremely honoured and proud to be part of the SEDC team, which has been entrusted by our Sarawak Premier to plan and set up various small and mega projects,” he said.

As for the tourism and hospitality sector, Abdul Aziz said refurbishment works had been carried out at Riverside Majestic Hotel and Damai Lagoon Resort, which will become a five-start resort by the year’s end.

“We also have plans for hotels in Miri, Marudi, and Betong. We are also looking forward to the implementation of the Damai Master Plan, the final report of which will be ready by next month,” he said.

Abdul Aziz added SEDC’s ventures into the quarry and mining businesses were bearing fruits and the corporation would play a significant role in providing materials for the state’s infrastructure projects.

“In the agricultural sector, we have acquired Carmor Plains in Northern Territory (Australia) to complement the Rosewood station resulting in higher productivity of the cattle farm.

“Our new ventures include a corned beef processing factory next to the new abattoir, and a feed factory for the production of feed for cattle and poultry,” he said.

The event also witnessed the launching of The Diamond Project and a new SEDC logo.