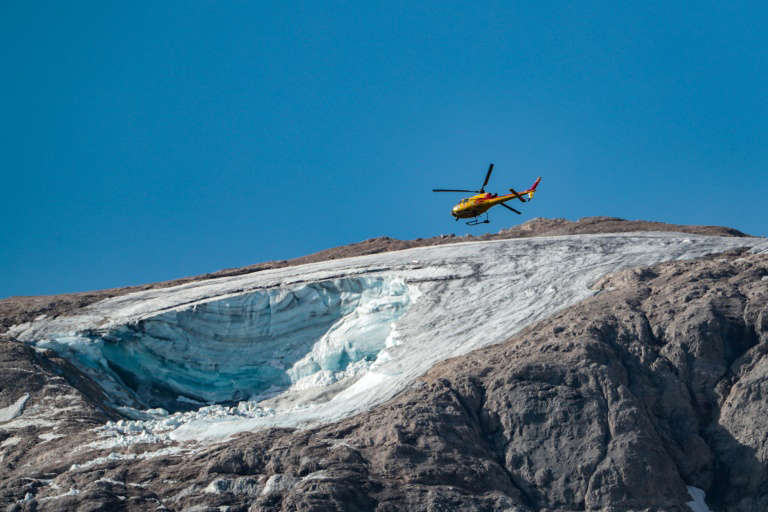 A rescue helicopter flies over the partially collapsed glacier on Marmolada, the highest mountain in the Dolomites. – AFP photo

CANAZEI, Italy (July 6): Emergency services at the scene of a deadly avalanche in the Italian Dolomites recovered what body parts they could on Tuesday, with the dangers of venturing under the partially collapsed glacier slowing the search.

Rescue teams sent helicopters and drones up for a second day after Sunday’s disaster, which saw at least seven hikers killed when a section of the country’s largest Alpine glacier gave way, sending ice and rock hurtling down the mountain.

The nationalities of the dead remain unclear — though the Czech foreign ministry told AFP two of its nationals were among those who lost their lives.

Eight people were also hurt, one of whom was able to leave hospital Tuesday evening.

Of those eight, two Germans, a man of 67 and a woman of 58, were said to be in a serious condition.

Italy has blamed the collapse on climate change and fears more of the glacier could come crashing down have prevented access to much of the area where hikers, some roped together, are believed to be buried.

Authorities had declared 14 people missing but revised that number down to five on Tuesday, all of them Italians, after managing to trace some of those initially unaccounted for.

They had stressed from the start that the exact number of climbers at the scene when the avalanche hit was unknown.

“Operations on the ground will only be carried out to recover any remains discovered by the drones, to ensure rescuers’ safety,” the Trentino Alpine Rescue Service said Tuesday.

Experts were surveying the area to determine how best to enable teams with sniffer dogs to get out onto the site safely on Wednesday or Thursday, the Service’s national chief Maurizio Dellantonio told AGI news agency.

Relatives of people reported missing gathered at the town of Canazei, where recovered remains were placed in a make-shift morgue at a gymnasium.

“The important finds, not just bones, are first photographed, then recovered and put onto a helicopter” and flown to Canazei to be “catalogued and placed in cold storage”, Dellantonio said.

Such finds were “bones that have not been flayed, a piece of hand with a ring, tattoos, anything that can enable a person to be identified”, including shoes, backpacks and ice-picks.

Helicopter pilot Fausto Zambelli told journalists some belongings had been spotted from the air, but it was not yet clear “if that means there are victims there, or if they belong to old hiking expeditions”.

He said hope of finding survivors under the ice was slim, but not entirely gone.

“If there are ‘pockets’ (of air), there’s still hope. Time is obviously short, but we still hope to find someone alive”.

The disaster struck one day after a record-high temperature of 10 degrees Celsius (50 degrees Fahrenheit) was recorded at the summit of Marmolada, the highest mountain in the Italian Dolomites.

Italy’s President Sergio Mattarella said the collapse was “symbolic of the many tragedies that ungoverned climate change is causing in so many parts of the world”.

The Trento public prosecutor’s office has opened an investigation to determine the causes of the tragedy as relatives of those caught up in the drama demanded answers.

“Why did nobody warn on Saturday that water had filtered beneath the glacier? Why did they not stop the people from going climbing?” Italian news agency ANSA quoted the sister of one missing Italian as saying.

“If someone is responsible, we shall pursue it to the end,” she said.

Trento regional president Maurizio Fugatti, who said drones fitted out with thermal imaging cameras had been deployed in the search for survivors and added rescuers would pursue their search in situ on Wednesday, insisted: “this was an exceptional, if not unique, event. There were also Alpine guides on the glacier who know the situation well,” Fugatti, indicating there was no indication anything untoward was afoot.

The glacier, nicknamed “queen of the Dolomites”, feeds the Avisio river and overlooks Lake Fedaia in the autonomous Italian province of Trento.

According to a March report by the UN Intergovernmental Panel on Climate Change (IPCC), melting ice and snow is one of 10 major threats caused by global warming, disrupting ecosystems and infrastructure. – AFP