Wednesday, October 5
You are at:Home»Columns»Just another point of view»Vandalism and a communal pride for public property 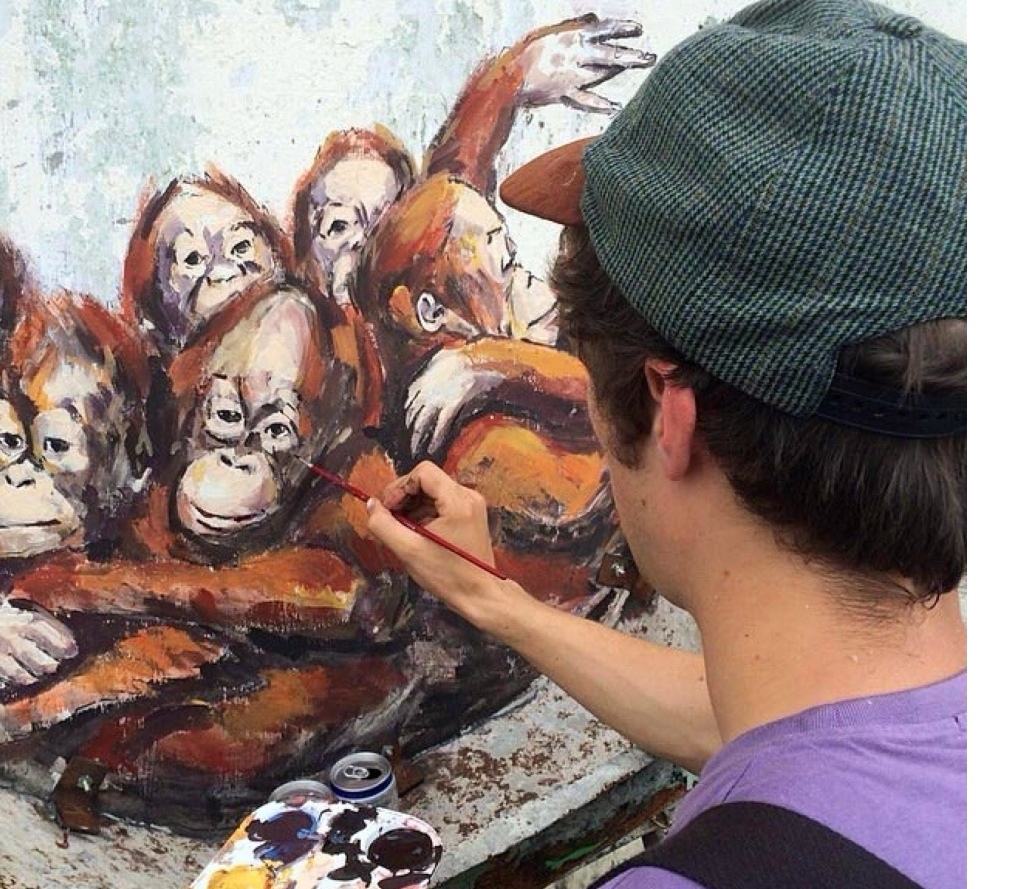 MOST of us were reminded this past week of a small crack in our society, which can be explained away by a few somewhat misconceived excuses like:

“Oh, it’s just another public mural, they can do another one!”

“It’s the prerogative of the building owner to make money by installing paid advertising over it, after all it’s his property.”

“The council or authority doesn’t seem to know what had happened!”

I had actually heard all these three excuses personally.

Along with the Deputy Premier  Dato Sri Dr Sim Kui Hian, and the Minister for Tourism, Creative Industry and Performing Arts Dato Sri Abdul Karim, who had both expressed shock at a recent ‘removal’ of famous Lithuanian street artist Ernest Zacharevic’s wall mural of ‘Orangutans in a Wheel-Barrow’, which was painted up to much fanfare in 2014 at Power Street in Kuching; I am both upset and astonished to learn, after the fact, that no one in authority seems to know who had given the greenlight and whether if there was any approval or permit for the replacement newly installed paid advertising, which is now in its place! 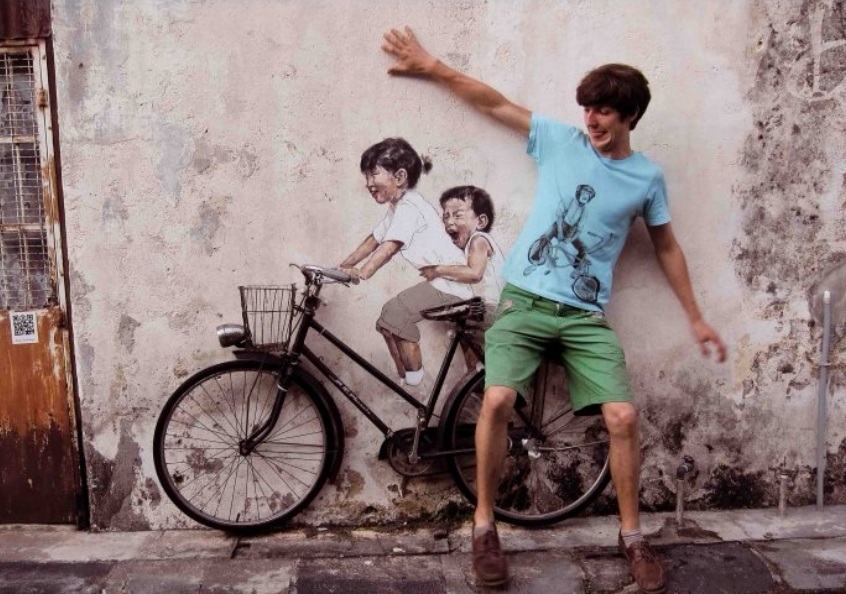 Zacharevic in front of his world-famous Penang mural, the ‘Little Children on a Bicycle’.

The former has responded publicly in support of the shocking incident: “I am enraged over this whole affair – I could not find a word to other describe this fiasco! Penang earns lots of tourist dollars from Zacharevic’s work – we should capitalise on the priceless gifts from the artist to Kuching, yet we have thrown everything into Sungai Sarawak.

Wee had further said that he hoped the culprit(s) would be brought to justice.

“I want to see someone held responsible for painting over the mural – the relevant authorities must take action if any law had been breached so as to send a strong message on the importance of conserving valuable community artworks, including street murals.”

“What is worse is that the public doesn’t seem to realise that this is vandalism on a treasured public masterpiece! Certain types of street art like this are truly meant for the public to appreciate close-up – I personally think we should not ‘cage’ them up – rather, the public be better educated.”

The jurisdiction of the area designated appears to be within Kuching North City Commission (DBKU)’s boundaries.

I had texted Commissioner Sih three times, and his last response on July 7, 2022 was: “My apologies. I forgot to feedback that the staff said they are investigating on the matter. Tqvm.”

It’d be five days by today: I hope the ‘investigation’ has been completed by now.

Please publish the outcome of it ASAP! 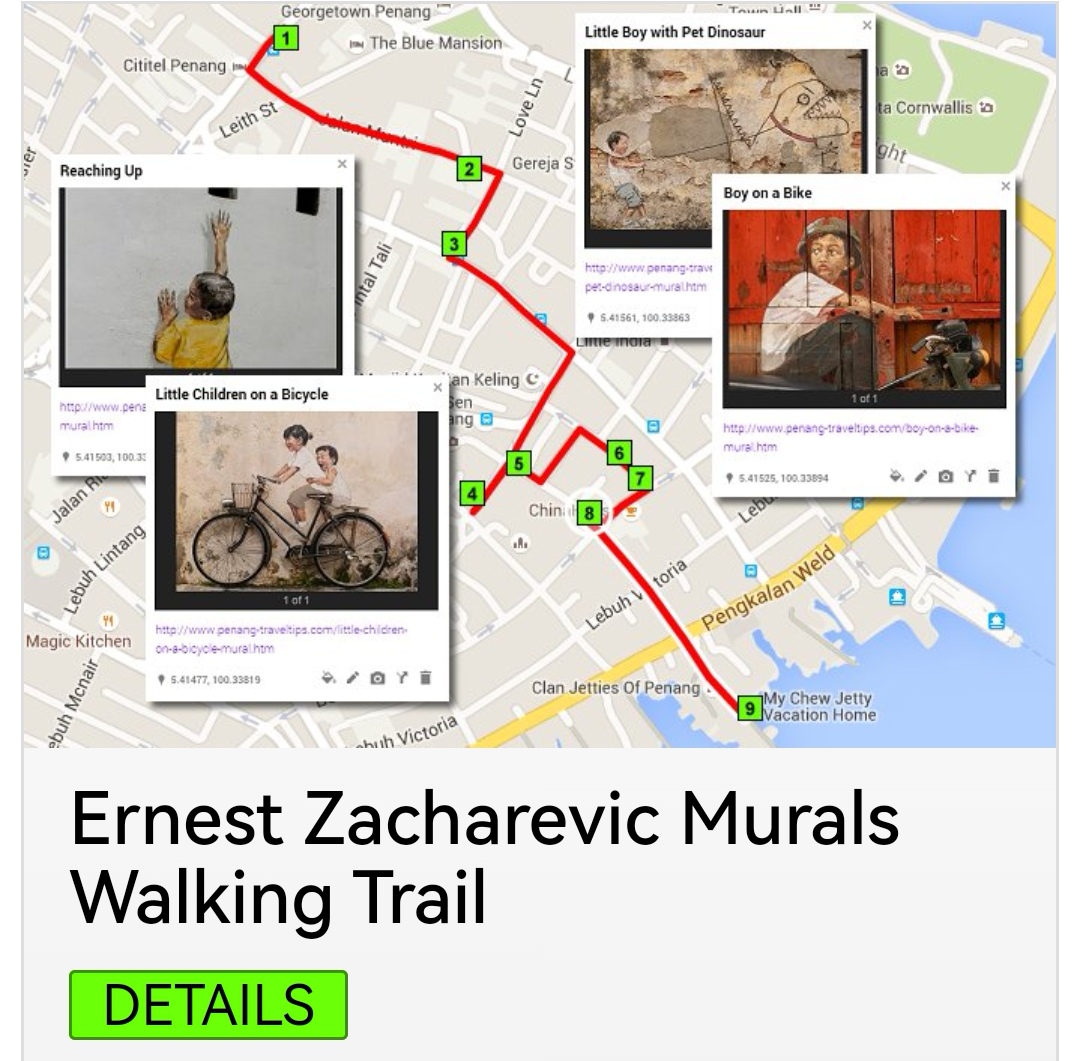 The Penang’s Tourism leaflet showing all nine of Zacharevic’s public murals as part of a walking tour.

In the attached graphic I share here of ‘Ernest Zacharevic Murals Walking Trail’ released by the Penang Tourism Board, it showed that Penang had greatly benefited from the nine public murals that had been painted all over Penang in 2012 as part of that year’s ‘George Town Festival’ – it had formed a series called ‘Mirrors George Town’.

In a leaflet to be found promoting this series are detailed information of the exact location of each mural, the name and its significance or meaning for that area; for example, the most famous and globally seen and recognised mural of ‘Little Children on a Bicycle’ was painted on June 30, 2012, and is located on the wall of a shophouse on Armenian Street. In the 10 years since it was set up, this mural has been vandalised at least four times, with the artist himself doing a retouch job in February 2016.

However, it has proven to be the most popular public image promoting Penang and Malaysia.

For today’s social media hungry tourists always on the lookout for memorable sights and images to share – on Facebook, Instagram and Twitter – it is free advertising indeed for Penang on a global scale; the sort of publicity that no amount of advertising budget can ever expend.

Of course, the easy way out to prevent vandalism is to make public murals beyond the reach of the human height – for example, the one of the ‘Bidayuh Ring Ladies’ at Mile 10, Kuching-Serian Road; or the ‘Girl with a Kitten’ at the junction of Wayang Street and Bishop’s House Bypass.

Both are high up way beyond the reach of any six-footer and can only be reached by ladders.

Even spray cans can’t reach them!

But that’s not the point, is it?

Why can’t our local community take care of such public properties, which add on to our local attractions as a city and as a tourist photo-op location? I was aghast in the past that only a few weeks after the initial revealing of the original ‘Orangutans’ mural at Power Street in 2014 that the wheelbarrow (which had formed as part of the entire work of art) was already heavily littered with rubbish – empty cans, used tissues and crushed UHT-drink boxes and plastic straws, and God knows how many burnt cigarette butts!

You can bet your last ringgit that those rubbish weren’t thrown there by any visiting tourist!

One reason why such public murals are best appreciated at close range and within touching distance is the capacity for ‘photo-ops’, which as a tourist yourself when you travel overseas would fully appreciate.

There’s nothing like having your own image taken with something recognisable next to you, in the background or as part of a group photo.

Imagine what would be the point of visiting the Eiffel Tower, the Taj Mahal or the Mona Lisa without having it in the background?

Would you really complete a visit to Singapore without shots taken at the Gardens by the Bay? 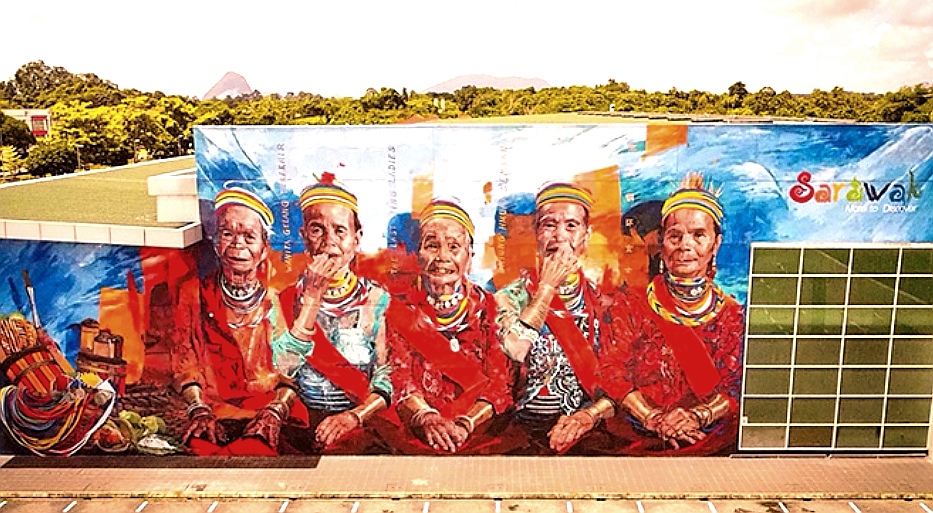 Insofar as Kuching is concerned, we have many attractions and great photo-ops; among them I have no problem naming – close-up shots of Kuching foods (we’re now part of Unesco Culinary Arts cities!) like ‘Laksa’ ‘Kolo Mee’, wild ‘midin’ and other tasty unique dishes; the new Borneo Cultures Museum; the State Legislative Assembly (DUN) Complez at Petra Jaya; the Mosque on the Sarawak River; the Golden Bridge; Sarawak Cultural Village and Mount Santubong; the many beaches especially at Satang in Lundu; hiking and waterfalls; downtown heritage shophouses along Main Bazaar, Carpenter Street, Ewe Hai Street and Jalan Padungan – the list is quite endless. 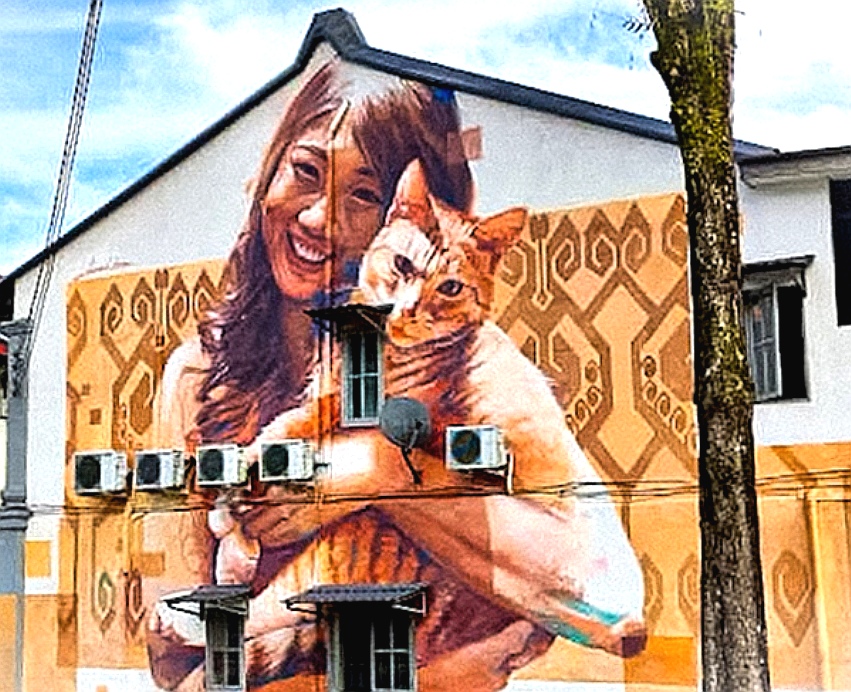 My favourite mural by Leonard Siaw at Wawasan Street of Emelyne Carmen Ho – ‘I Love Kuching’.

It’s only in recent years that we’ve added on a number of extremely beautiful, artistic and thematic public murals – and the ones that come to mind easily would be those along Pearl Street, Kai Joo Lane/India Street, Market and Mile 10 Bazaar – I hope that our travel agencies, and hopefully our Sarawak Tourism Board (STB), had printed some publicity leaflets for tourists’ benefit, as I am sure there’d be many clamouring for photo-ops with these public murals; however, a useful locations guide is much needed.

I would conclude on the issue of public littering, which disappointingly, is something we as a community has not been able to instil in our locals.

What has happened to the enforcement of such litterbugs everywhere?

I still see so many posts and shares on social media of photographs taken showing off those ugly garbage, rubbish and throw-away items into places that are not designated for rubbish!

I believe that a society without a caring concern for its own living environment will never be destined for greatness – please remember that we all have to live with each other in this beautiful city, town, village and whatever we do to ensure its continued charm, cleanliness and harmony will make it all that much better place to be and to raise our children and theirs.

God Bless you all.