Friday, December 2
You are at:Home»News»Sabah»Sabah should plant corn and rice – agricultural entrepreneur 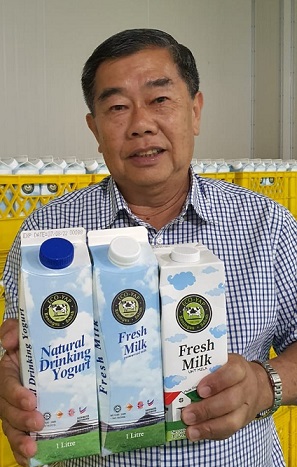 PUTATAN (July 11): The Agriculture and Food Industry Ministry (MAFI) has been urged to review its existing policies to suit the current situation.

He said the supply shortages for chicken, eggs, beef and pork are caused by high cost of importing animal feed, such as corn, soybeans and rice bran.

“We have vast fertile land and favourable climate all year. Why don’t we cultivate corn here?

“We also have 40,000 hectares of paddy field, which if utilized fully, we do not need to import rice anymore,” he said in a press conference at the Eco-Yap fresh milk processing factory at Yun Fook Resources Sdn Bhd in Lok Kawi here on Monday.

He said the paddy fields could be cultivated three times a year, or be used to plant different crops such as corn or soybeans.

Yap, who cultivates paddy in a joint venture in Terusan Sapi, Beluran, also proposed the creation of anchor companies to look after farmers by providing machinery.

He said 70 per cent of the rice in Sabah was imported from Vietnam and more than 10 per cent from Thailand.

“If we cultivate rice on the 40,000 hectares of paddy field three times a year, we can achieve self-sufficiency level.”

On another note, Yap, who is also the president of Sabah Daily Farmers Association, lamented the cost of diesel at industrial price which is over RM5 per litre.

He was baffled as to why only fishermen are given subsidized diesel of RM1.60 per litre, while livestock and paddy farmers have to buy expensive fuel.

He urged the Minister of Agriculture and Food Industries Datuk Seri Dr Ronald Kiandee, who is a Sabahan, to look into the issues the industry players face.

He said Ronald should help the industry through policies by bringing the matter to the Cabinet and Parliament.