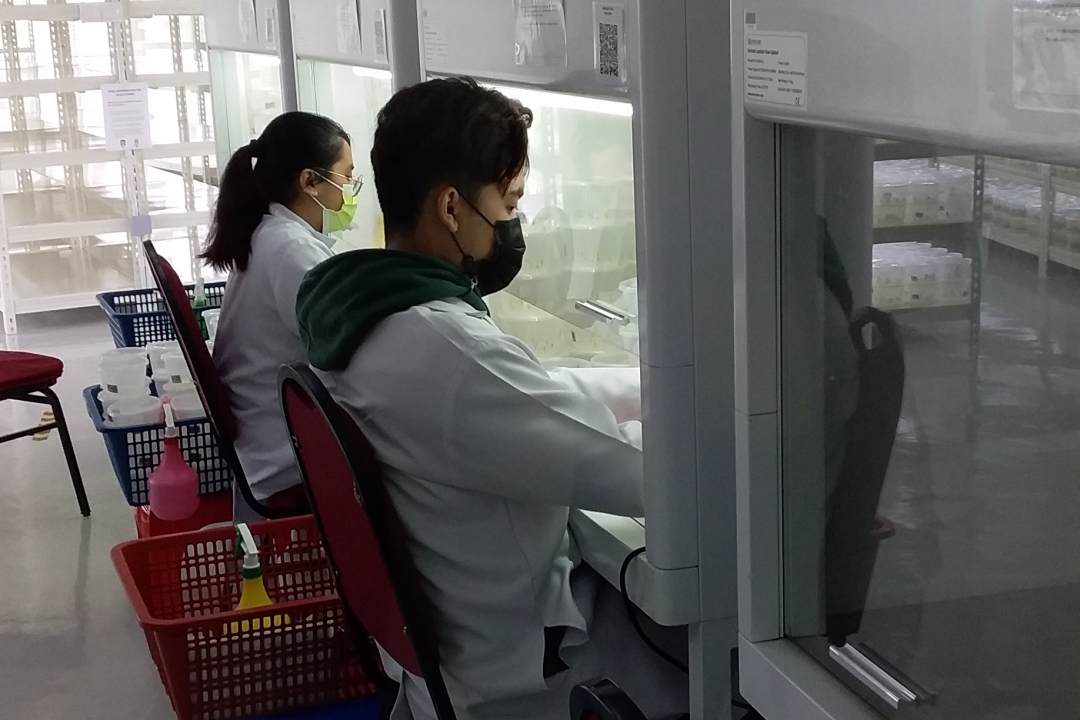 The seed to plant propagating laboratory at TSG Green in Kuching.

THINKING that I was up to date with metric measurements, I visited a building supplier in England last year and asked for six pieces of wood measuring 5 x 5 cm and each a metre long. The counter clerk looked quizzically at me and replied, “Do you mean 2 x 2 inches and three feet and three and a half inches long?”

I had not realised that the timber industry still worked in Imperial measurements. In my recent visit to Kuching, I was delighted to learn that feet and inches were still used in the local timber trade.

Revo Tropix Paulownia (RT Paulownia) is the buzzword amongst silviculturalists in Sarawak. A soft hardwood tree, it has been developed or more precisely cloned here in Malaysia. Originally the Paulownia or ‘princess tree’ came from western and southern China and later cultivated in Japan and Korea. Introduced into the USA in the 1840s, it was much admired as an exotic ornamental tree with beautiful purplish blue flowers. Today it is grown in British and European gardens but in some US states it has been classified as an invasive species.

Revo Tropix Paulownia is a Sarawak bred variant growing well in well-drained tropical soils and exhibiting fast growing properties. This tree, growing to a height of 50 feet, can be harvested for its timber between three and four years of planting.

It is a remarkable carbon sink, absorbing many times the amount of atmospheric carbon dioxide of other tree species. Its large leaves can also be used as animal feed, especially for cattle fodder. Ideally it can be planted on degraded forest land and preferably on well-drained sandy soils and has a root depth of 15 feet. Waterlogged soils lead to root rot and the collapse of the tree.

Recently, I had the privilege of accompanying Datuk Mutang Tagal with friends to be taken to the TSG Green laboratory in Kuching to see cloned seeds meticulously planted in pots and propagated until a couple of centimetres tall before transport to the company’s 15-acre nursery and research and development plot in Kota Samarahan. 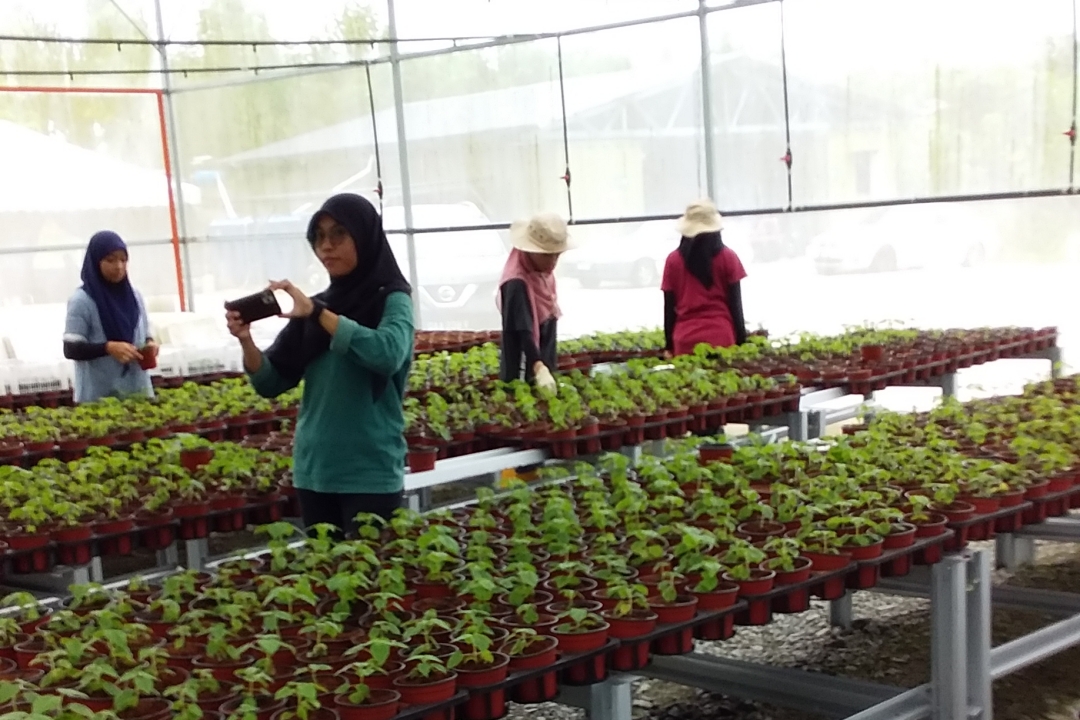 Nursery staff tend to the young plants in Kota Samarahan.

There, the manager, an avid silviculturalist, met us together with two of his extremely knowledgeable staff and walked us through the propagation of plant stages to a suitably sized plant ready for the outdoors. These plants are planted in the ground using a suitable potassium rich fertiliser. The enthusiasm of all the employees in the nursery beds and beyond was overwhelming.

Rows of saplings were planted, each 10 to 12 feet apart, on well-drained slopes. Many of the trees were but a year old and had grown to a height of about 20 feet. To make it a worthwhile timber species and knot free, the lower branches are lopped off and thus the tree grows even higher into the sky.

After about three to four years at a height of 50 feet or more and with a girth of a giant bear hug, the tree can be sawn down. The first two-thirds of its height is used for sawn timber and the top third used for chipboard amongst other uses.

The tree has the great beauty of regenerating from its stump where a new shoot appears and the cycle of growth happens yet again. This cycle can be repeated for up to six times from the initial planting of the same tree.

With Sarawak’s sandy hillside slope soils (derived from the weathering of the underlying sandstone bedrocks) these trees will help stabilise bare slopes once covered with tropical hardwood forests and has the potential of increasing the income of remote villages without damaging the environment.

With its deep roots, it provides stability to steep slopes where trees would not otherwise grow and it has a greater tolerance to wind and stormy weather. However, it is not a miracle tree for it requires careful attention to soil conditions but as it can grow in soils lacking good quality, it is the ideal tree for reforestation and afforestation schemes.

Almost knot free and disease resistant, it has a high temperature resistance with a combustion temperature nearly double that of many hard and soft woods. Known as the ‘aluminium’ of timber supplies because of its lightness and weighing one-third of the weight of oak and half the weight of pine, it has the highest strength to weight ratio of any timber. 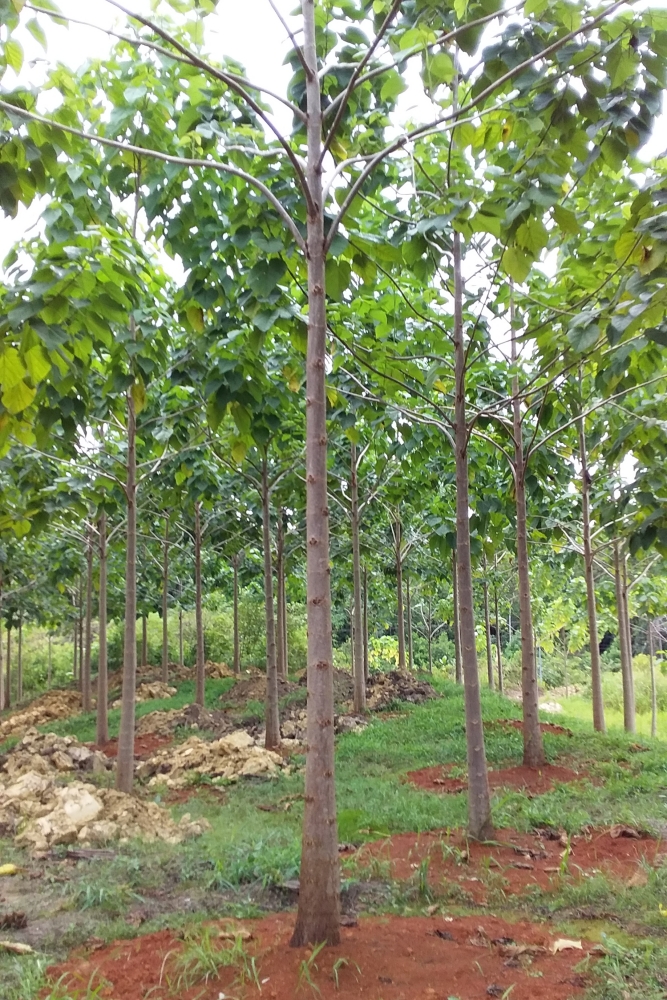 These 20 feet high RT Paulownia were planted from saplings in June last year.

RT Paulownia has a multitude of uses varying from house building, parquet flooring, furniture veneer, wooden chests and boxes, even to the manufacture of coffins. It can be used for boat building, in the construction of clinker built kayaks, surf boards, and skis. The latter usages require oiling the wood at regular intervals for further protection, It is also an insect resistant wood.

Other uses include the manufacture of electric guitars and other musical instruments owing to its resonance, barrels for wine and beer, the manufacture of light packing crates, wood carving, beehives, wood shavings as packing material, and wood pulp.

It is a species of wood with many facets and more to the point a giant absorber of atmospheric carbon dioxide. A one-acre plot of Paulownias absorbs as much as 103 metric tonnes of CO2 per annum. Even its leaves can be crushed into organic garden compost.

Undoubtedly this species of tree can make a significant contribution to Sarawak’s plans to plant 35 million trees by 2025. With a fine-grained wood, RT Paulownia is a true bio-technical discovery of the 21st century with a tissue laboratory ready to produce 3.6 million saplings by next year.

The TSG Green initiative to grow RT Paulownia is the brainchild of its director Dato Chris Chung Soon Nam and to whom I am most grateful for such a worthwhile visit to both his sites. His culture centre laboratory technicians and demonstration staff together with his field station and nursery employees at Kota Samarahan simply oozed with enthusiasm and genuinely believe literally in their ground-breaking endeavours to make RT Paulownia the tree of this century.

Previous ArticleRM3 mln for repair of slope affected by landslide in Tongod
Next Article A new Malaysia Agreement, really?