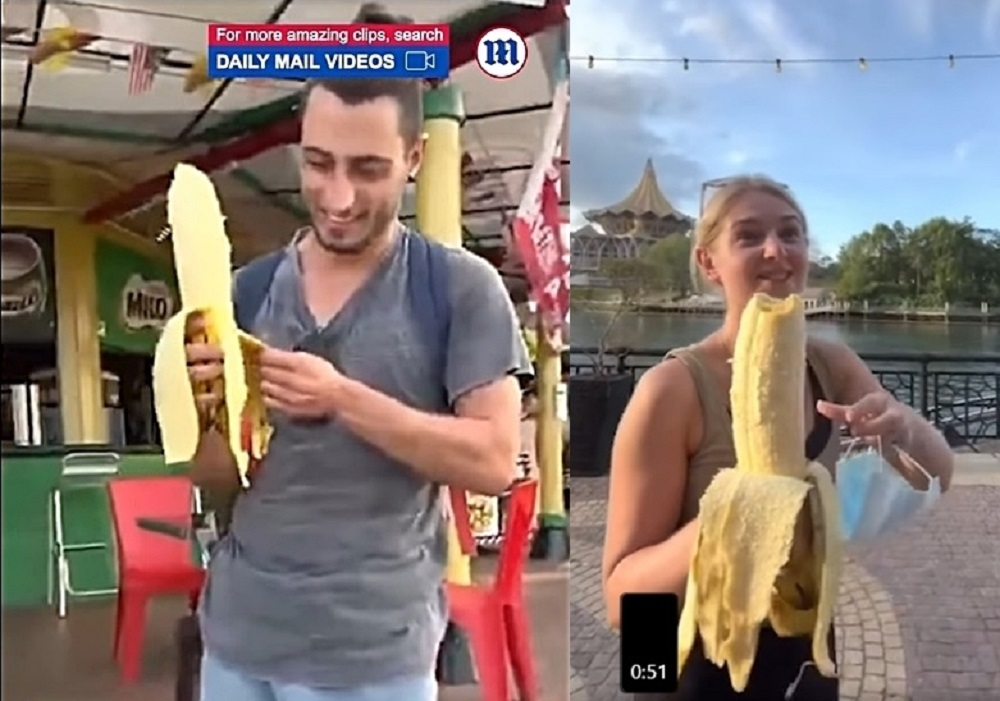 A screengrab of the foreign couple with the ‘giant banana’ while strolling along the Kuching Waterfront.

KUCHING (July 17): A video clip of a foreign couple eating a ‘giant banana’ while strolling along the Kuching Waterfront here is creating a buzz abroad.

The clip, which was widely shared locally earlier this month, was picked up and posted on Facebook by the UK’s Daily Mail Video this morning, generating almost 500 shares in under six hours.

In the Daily Mail Video, the host can be heard announcing: “Prepared to be amazed at what may be the biggest banana you’ve ever seen.”

Viewers will then see the young Western man peeling off the ‘giant banana’ and starting to eat it as the couple strolled along the Kuching Waterfront.

One scene in the clip clearly shows the Sarawak State Legislative Assembly Complex in the background, but the Daily Mail Video merely identified the couple’s location as ‘Borneo, Asia’.

Quite a number of comments on the Facebook post pointed out that the ‘giant banana’ is not meant to be eaten raw.

Prakan So posted: “They are being looked at because it’s not a ‘banana’ but a variation on the plantation (sic) and not usually eaten like that.. smh it’s meant to be cooked or fried”.

“That’s probably a plantain, not a banana. Sigh…,” read another comment posted by K.B. Davies.

Concurring with Davies was Christine Camara who shared: “It is a plantain. You need to cook before eating”.

Another comment by Brenda James reads: “I’d think that would make them sick. I’ve never had one, but my granddaughter is Puerto Rican and I know you cook those”.

Also commenting was Lynnette Lucas who asserted: “When people don’t know that it’s a plantain and not a banana need to go back to school or get off social media and take off their tinfoil hats”.