Tuesday, September 27
You are at:Home»News»Sarawak»Revisiting birth of Sarawak

In the run up to the Sarawak Day celebration this year, The Borneo Post is carrying a series of commemorative reports beginning today with a look back at the creation of our great state and the declaration of July 22 as a public holiday. 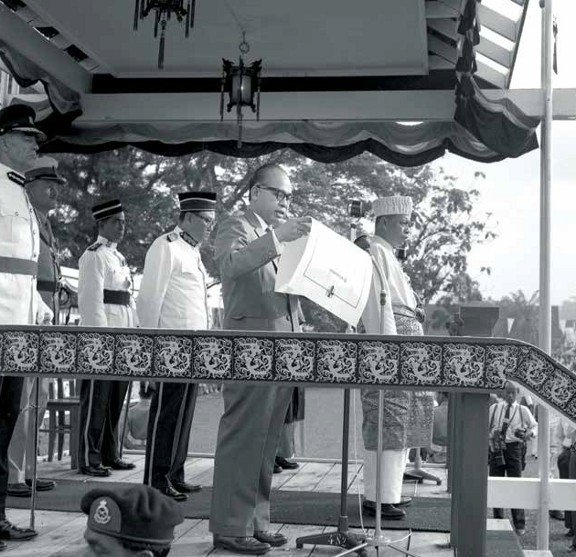 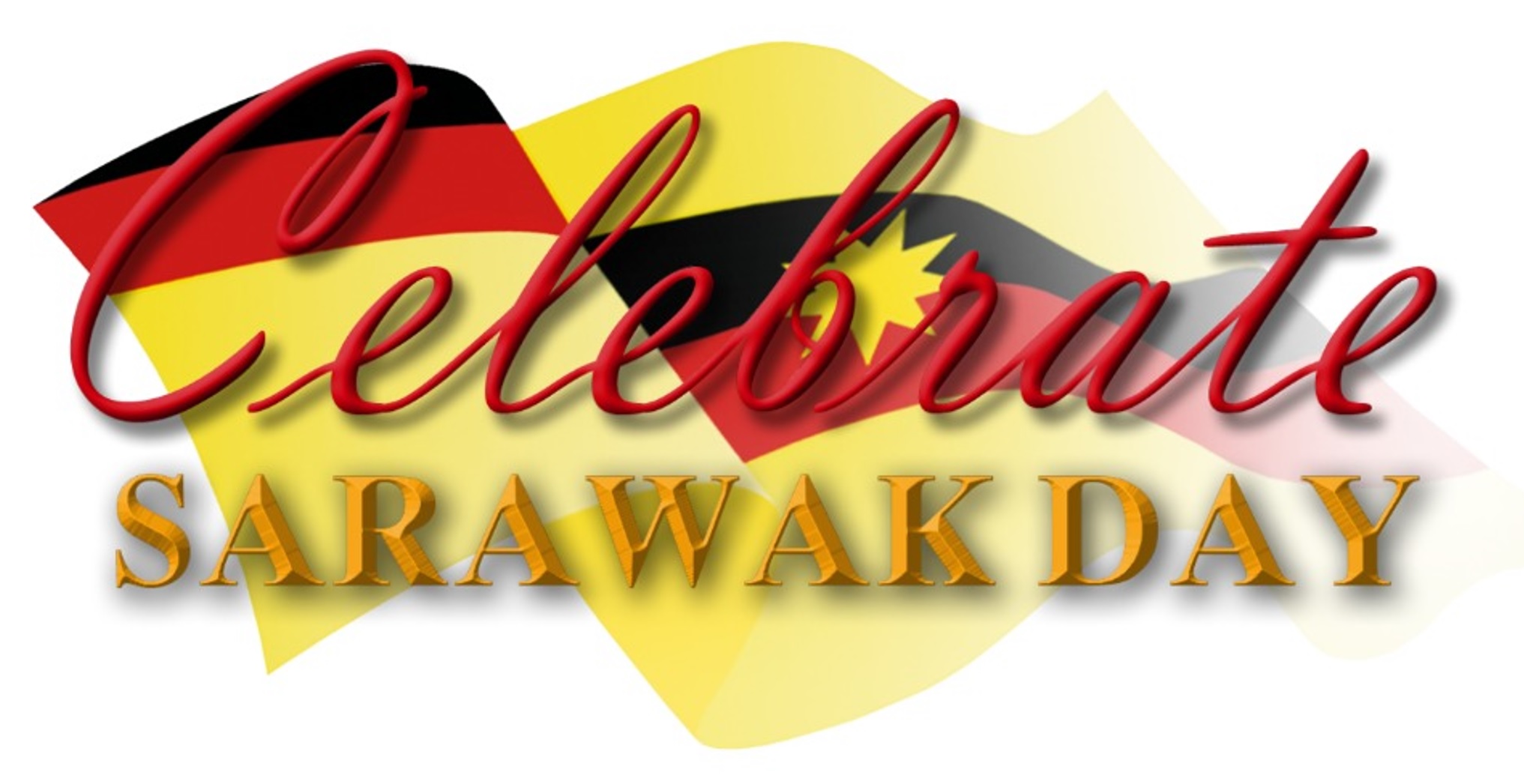 THE land called ‘Sarawak’ today was identified as Cerava by Portuguese cartographers long ago. It was a loosely-governed territory under the control of the Brunei Sultanate in the 19th century.

At the start of the 19th century, Brunei’s Sultan, Omar Ali Saif-Udin sent Pangiran Mahkota to Kuching to be the Governor of Sarawak. In 1836, the Malays and Land Dayaks (now known as the Bidayuhs) of the Sarawak River basin revolted and proclaimed their independence from Brunei.

The Sultan sent his uncle Raja Muda Hashim, the Bendahara of Brunei, to put down the rebellion but was unsuccessful. The rebellion led by Datu Patinggi Ali against the Brunei levies under Pangiran Mahkota escalated. It was at the height of this unrest that a British adventurer by the name of James Brooke first arrived in Kuching in 1839. 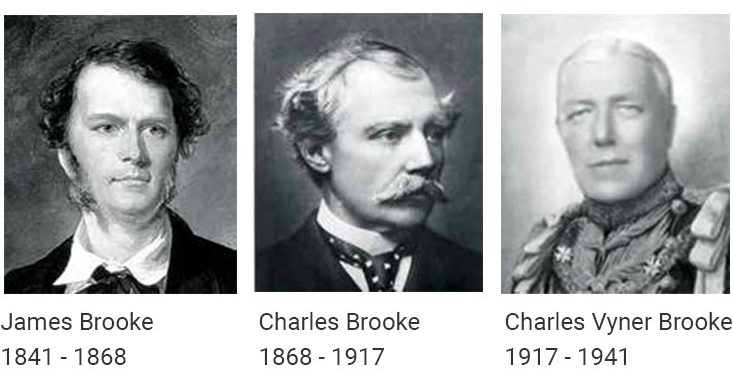 On his second visit in 1841, James Brooke agreed to help Raja Muda Hashim to quell the rebellion in Sarawak. As a reward, he was installed as the Rajah of Sarawak in Kuching on Sept 18, 1842.

James Brooke was succeeded by his nephew Charles Brooke in 1867 who introduced a public administration system and built a strategic network of fortresses, including Fort Margherita.

His second son Charles Vyner Brooke succeeded him to become the third Rajah of Sarawak on May 24, 1917. Vyner Brooke formulated a new constitution to put an end to the absolute power of the Rajah in 1941. The Council Negri was given the power to ensure that no law could be passed or money spent without its consent.

The Brooke authority was constantly challenged by the local indigenous leaders, most notably Sharip Sahap, Sharip Masahor, Rentap, Bantin and the Hakka gold miners from Bau led by Liu Shan Bang. The Brookes, however, were able to contain all the uprisings.

On Dec 16, 1941, Japanese forces landed in Miri and scaled up Tanjong Lobang to reach the lighthouse where the caretaker was killed. Vyner Brooke had already left for Australia when the Japanese invaded Sarawak.

Most of the European officers in Sarawak were rounded up by the Japanese and interned at Lintang Camp (the present Batu Lintang Teachers’ Training College) in Kuching. Many did not survive the ordeal.

On Aug 15, 1945, Japan sought peace and all regular resistance to the occupation forces ceased.

Sarawak was placed under British Military Rule administered by the Australian Military until April 15, 1946.

In early 1946, Vyner Brooke announced his intention to cede Sarawak to Britain. The British government found that there was sufficient support for cession to be put before the Council Negri. The Bill of Cession was read for the third time on May 17, 1946 and was passed by 19 votes against 16 in the Council Negri.

On July 1, 1946, Sarawak became a British Crown Colony with Sir Charles Arden Clarke made the first Governor of the Colony.

The people of Sarawak were largely divided over the question of cession. The passing of the motion by a small European majority in the Council Negri did not end this issue.

The awakening of political consciousness

Dissatisfaction mounted and culminated in the mass resignation of 388 Malay civil servants and the assassination of Sir Duncan Stewart, the Second British Governor in 1949 by Rosli Dhoby in Sibu.

In 1956, a new constitution was promulgated to give an official majority to the Council Negri for the first time. The first direct local government elections were held in November that year.

On 27 May, 1961, Malayan Prime Minister Tunku Abdul Rahman proposed a merger for closer political and economic cooperation between the Federation of Malaya, Singapore, Sarawak, Sabah (then North Borneo) and Brunei.

British Prime Minister Sir Harold Macmillan favoured the proposal and the first Malaysia Solidarity Consultative Committee (MSCC) meeting was held in Singapore two months later, followed by an eye-opening visit by leaders from Sarawak and Sabah to Malaya on Aug 12, 1962. 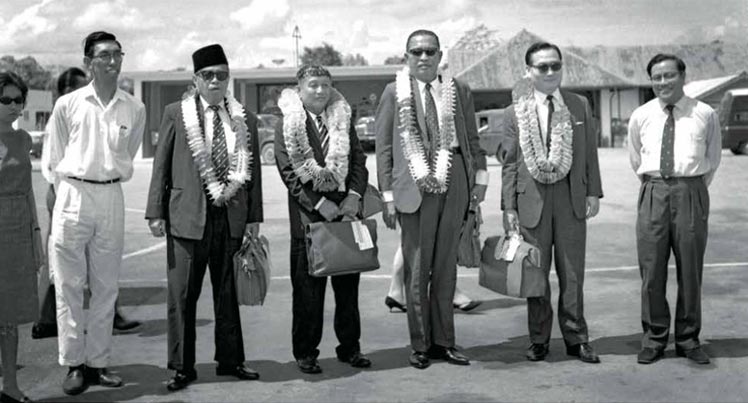 Sarawak representatives at Kuching Airport on July 12, 1963 after returning from London where they signed the historic agreement to form Malaysia and end colonial rule. – Photo via sarawak.gov.my

A five-man team of two Malayans and three British representatives headed by Lord Cameron Cobbold then conducted a referendum amongst Sarawakians on the proposed Federation of Malaysia.

The findings of the Cobbold Commission led to the Malaysia Agreement inked on July 9, 1963 by Malaya, Sabah, Sarawak and Singapore.

The Agreement, which spelt out the 20-point requirements raised by Sabah and 18 points by Sarawak, sought to protect the interest, rights and autonomy of the people of the two Borneo states after the formation of Malaysia.

On July 22, 1963, the Governor of Sarawak Sir Alexander Waddell issued a proclamation to form the first Supreme Council with Stephen Kalong Ningkan appointed as the first Chief Minister of Sarawak.

This marked the end of colonial rule and birth of Sarawak as a self-governing country.

Waddell left the Astana and boarded a white sampan to cross the Sarawak River.

He handed the administration of Sarawak to the people of Sarawak, with the colonial Union Jack flag lowered for the last time, and the Sarawak flag raised.

Waddell’s last message to the people of Sarawak was: “To say goodbye is never easy but it is particularly difficult to say goodbye to Sarawak – the more so at a time of historic change and of great events.”

On Aug 29, 1963, the Yang Di-Pertuan Agong signed the Malaysia Declaration for the formation of the Federation of Malaysia.

This was subsequently approved by the Sarawak Legislative Assembly on Sept 4, 1963 with 38 votes for and five against.

A week later, Ningkan, three state cabinet ministers and 10 members of the Alliance flew to Kuala Lumpur to meet the Prime Minister and the Secretary of the Colony of Britain, Duncan Sandys. 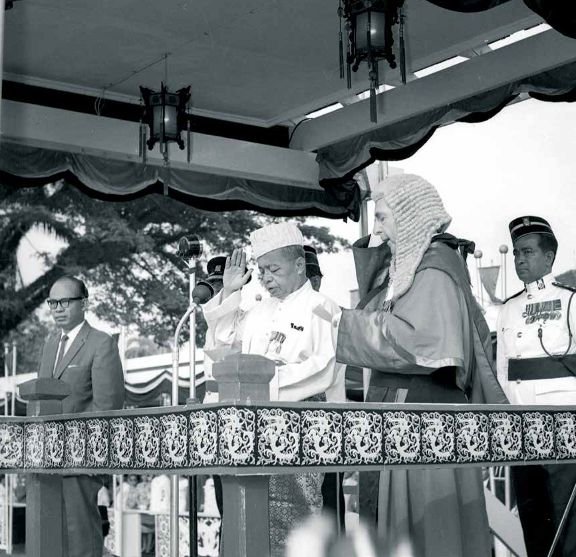 Proclamation by the First Governor of Sarawak, His Excellency Tun Abang Openg Abang Sapiee on Sept 16, 1963 at Central Padang Kuching. – Photo via sarawak.gov.my

On Sept 16, 1963, the historic Proclamation of Malaysia was witnessed by Tun Abang Openg Abang Sapiee – the first Yang di-Pertua Negeri Sarawak, Ningkan, members of the first State Cabinet and the public at Central Padang in Kuching.

In the Proclamation of the Independence of Sarawak, Ningkan read: “Now therefore I, Stephen Kalong Ningkan, the Chief Minister of Sarawak, hereby proclaim that Sarawak has this day attained independence as a State of Malaysia”.

This was followed by the hoisting of the federal flag and the playing of the national anthem ‘Negaraku’.

On this historical day, Sarawak achieved full independence as a member state of the Federation of Malaysia. 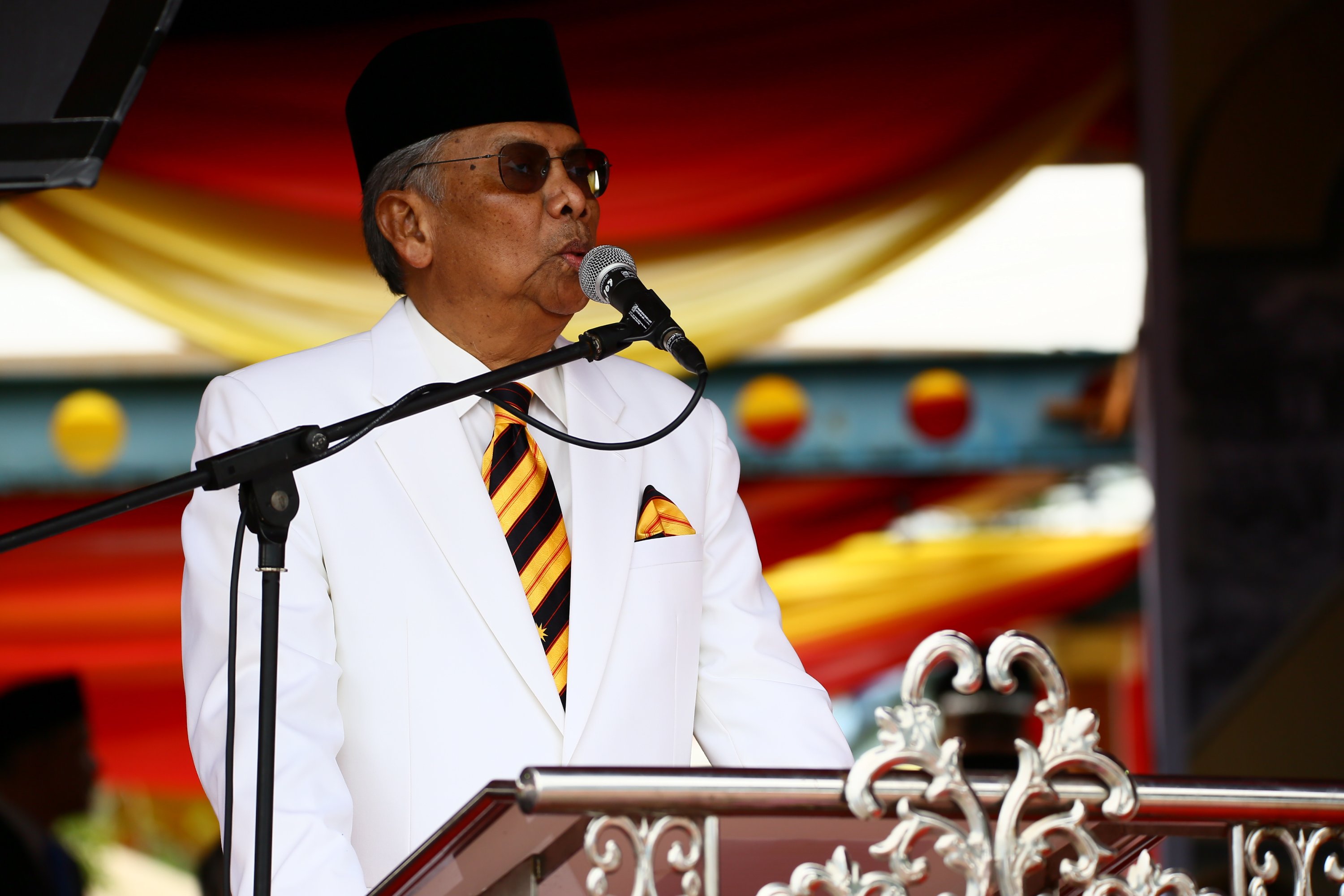 Adenan delivers his address during the inaugural Sarawak Day celebration in 2016. – Photo by Muhammad Rais Sanusi

On April 23, 2016, then Chief Minister Datuk Patinggi Tan Sri Adenan Satem declared July 22 a public holiday for Sarawak in honour of past leaders who had sacrificed much for the state’s independence.

Adenan, affectionately known as Tok Nan, had explained that the declaration of July 22 as a public holiday was meant to improve historical awareness among locals and Malaysians.

“To honour and remember past leaders who have struggled for Sarawak’s independence, I declare July 22 as a public holiday for the state of Sarawak.

“It will be ‘Sarawak Day’ for us to remember the sacrifices and contributions of our past leaders,” he said at the final stop of the Sejiwa Senada programme in Metrocity Matang in April 2016.

Adenan pledged that he would continue to pursue negotiations for the return of autonomy to the Sarawak government.

“I want those powers back. We also want to claim our rights for oil royalty as five per cent is definitely not enough. Because I am your chief minister, not of Kedah or other states. So whatever that involves my land and affect my people, I will fight for you, all the way,” he said.

The official Sarawak Day public holiday was gazetted after a statement was issued by the State Administrative Unit of the Chief Minister’s Department in May 2016. 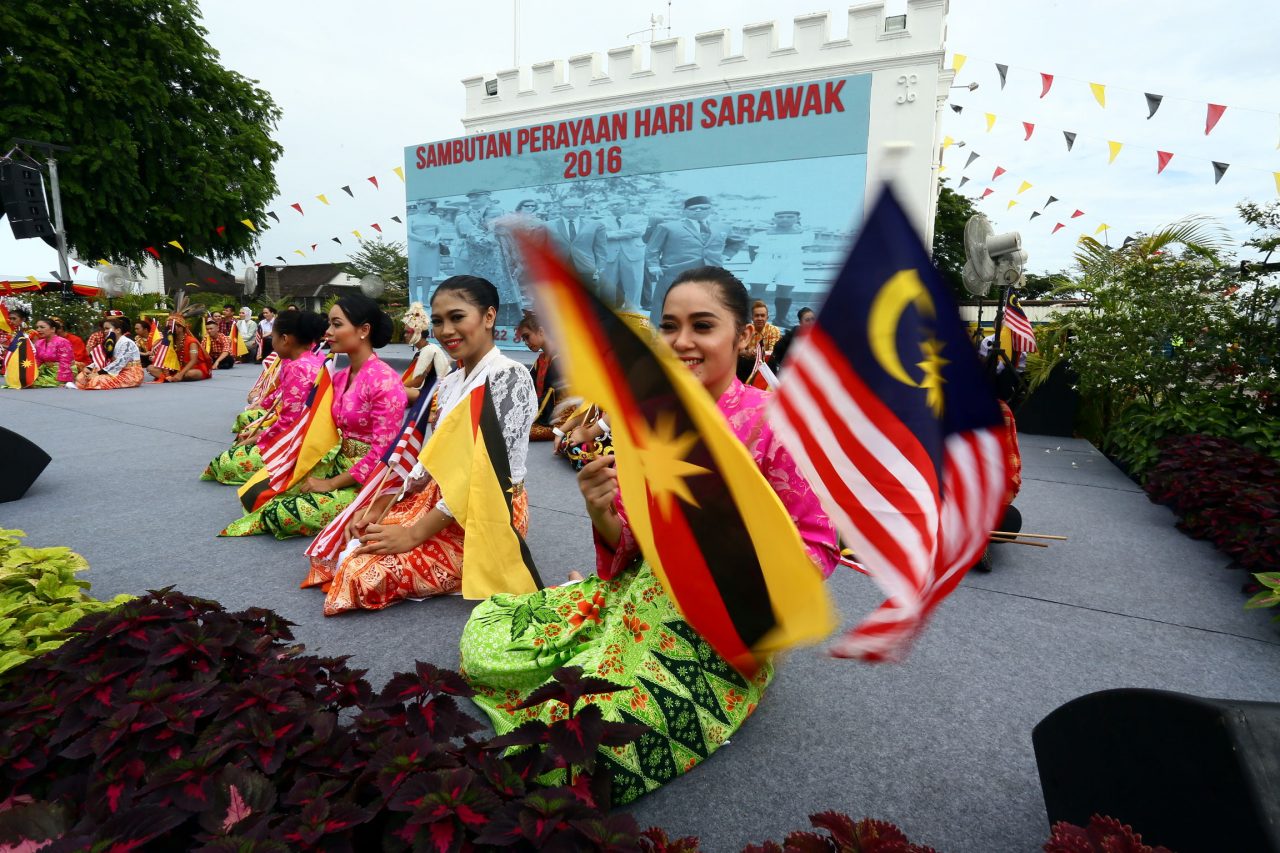 A performer waves both the flag of Sarawak and the Jalur Gemilang during the inaugural Sarawak Day celebration. – Photo by Muhammad Rais Sanusi

During the inaugural Sarawak Day celebration in 2016, Adenan said it was the duty of Sarawak to remind officials from Kuala Lumpur of the pertinence of the Malaysia Agreement 1963.

He conceded that there has been constant erosion of power given to Sarawak over the last 50 over years and that Sarawak is in the process of reclaiming its rights.

“Those officials in Kuala Lumpur were not even born in 1963. They are ignorant. It is therefore our duty to remind them of the agreement.

“I dare say that Sabah will follow through but we must fight for our own. The first step is to declare Sarawak Day to show that we are thankful to those who fought for our independence,” he said at the celebration at Kuching Waterfront.

Adenan stressed that Sarawak chose to be part of Malaysia back in 1963, pointing out: “It is our choice to be independent partners. That is why we have the agreement.”

“Our position is no cessation – Malaysia before, Malaysia now and Malaysia forever in the future,” he added.