Friday, August 12
You are at:Home»Features»‘Future for Sarawak lies in our diversity’ 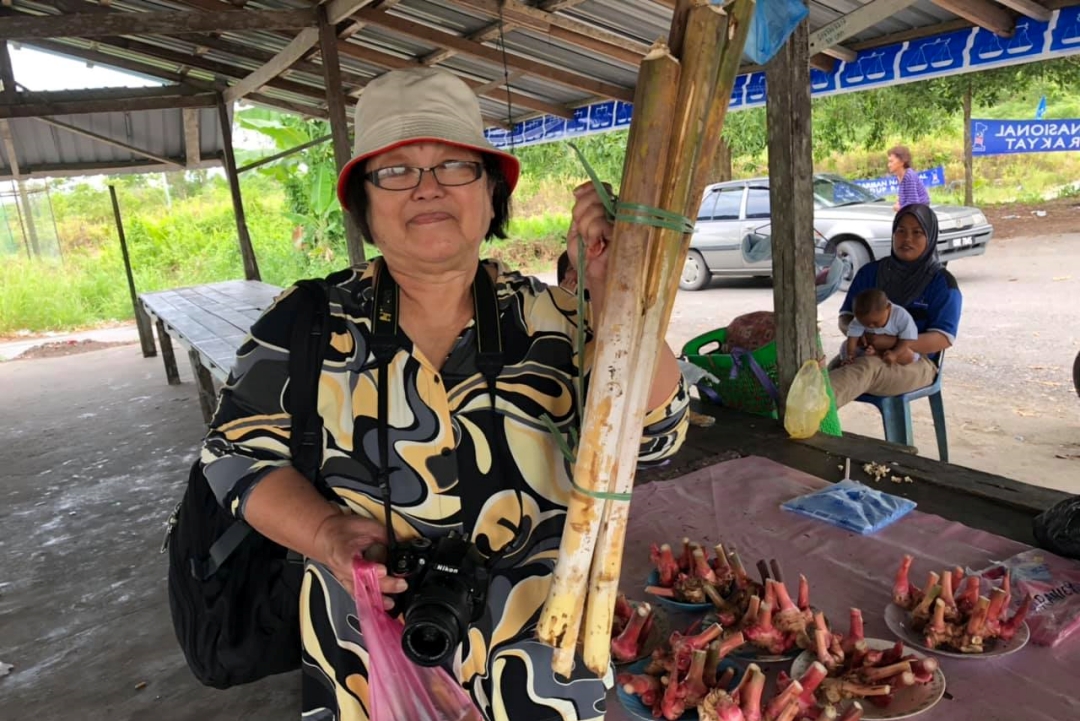 With her camera ready and her backpack strapped, the writer is all set for an ‘ulu’ adventure.

IT was still the Colonial era when I was born in 1949 in Pulau Kerto, and I was the firstborn.

By the time they had me, my father was 40 years old and my mother was only 25.

I was delivered by a barefooted midwife, who brought along a rattan basket with simple instruments in it.

My father had to cross the Rajang River on board an ice boat, and cycled his way to the midwife’s house to fetch her. The family was able to use the motorised ice boat to travel to Sibu in case of any emergency – including my birth.

My mother had told me that she never realised how dangerous giving birth could be.

What she did know was that it was a natural thing, and God had made women to give birth easily.

It was not surprising to hear these words from her – my mother was a tough Foochow woman, with a very high threshold for pain.

There was this analogy for childbirth that she had based on her experience in pig-rearing during the Japanese Occupation.

“Many piglets were born in the pigsties in my village and the mother pig had never once suffered haemorrhaging, or it never even had a midwife!”
That was Mum – a very practical person, with a great sense of humour. 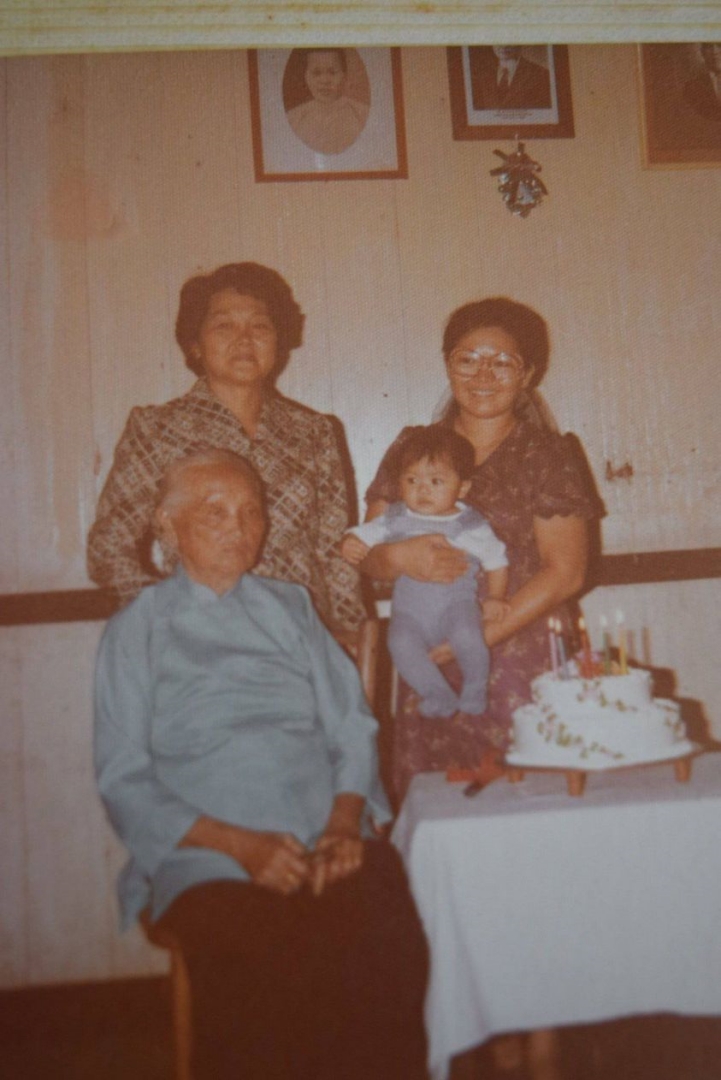 An old photo shows the four generations of the writer’s family – her maternal grandmother (seated) together with her mother (left), herself and her baby Linda.

I grew up with the children of the ice mill workers, more than 50 of them comprising the Ibans, the Melanaus, the Malays, the Foochows and the Cantonese.

For us, the children, we just played together!

By the time I was about to enter Primary 1, my father decided to relocate us to Sibu and by chance, he landed a job at the bank in 1956.

Two years later, my grandfather established his brickyard and he took my father to become the manager. It was after that when I saw more brick houses gradually being built in Sibu.

I went to the Methodist primary and secondary schools, where I had a really good English-medium education and learned about volunteer work, Girl Guiding and Methodist Youth Fellowship. There was a saying in town, which went something like this: ‘The Methodists study seven days a week because the Methodist Church conducts Sunday School’.

Regardless, I did enjoy going to school seven days a week.

I had a happy, uncomplicated childhood – one surrounded by members of a large extended family such as my paternal grandparents, my maternal grandmother, uncles, aunties and cousins. 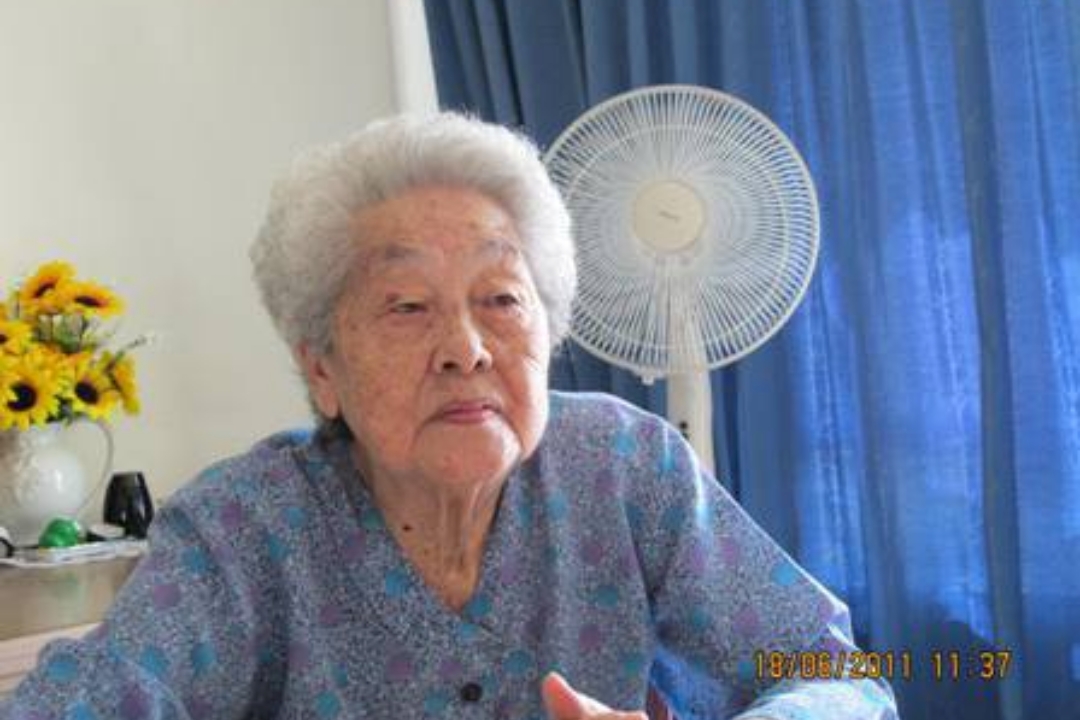 We all had our own homes, but we got together very often. My father never failed to bring us to see our paternal grandfather in Sungei Merah every Sunday evening.

My mother, a tough Foochow woman, never allowed us in the kitchen. Instead, we were reminded to study hard every day.

She never monitored us doing our homework, but she made sure that we would study in the afternoon and in the evening, each for at least two hours.

She also made sure that she would not be asked to meet the Headmaster, which she would see as ‘a great embarrassment’.

I was very grateful that she later engaged a home tutor for us, Miss Ling who was out to ensure that my sister and I would pass the crucial Primary 6 Entrance Examination.

From thereon, Miss Ling had become a family friend.

My mother did most of the chores, and we only helped fold clothes and babysit the small children.

I do remember fondly cutting the firewood into small pieces in the backyard. That was our bonding time and honestly, it was a real joy in my life.

We also tended to a small vegetable patch, and had some chickens and ducks as well. 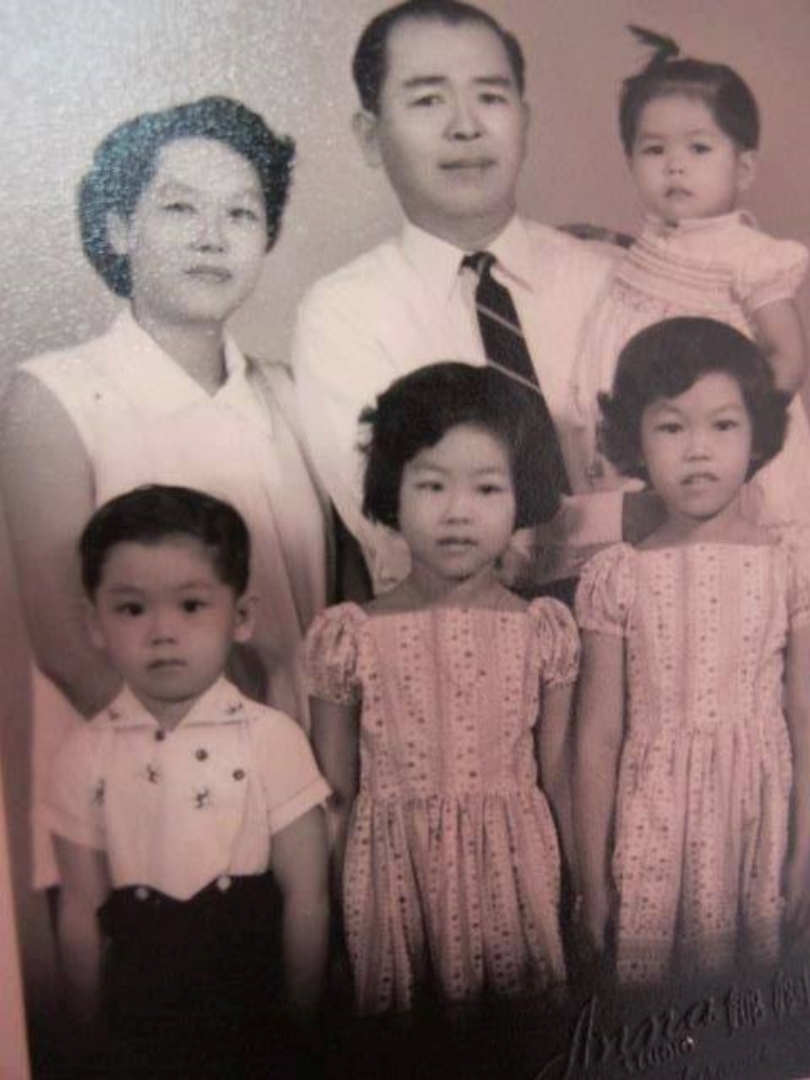 The writer’s family, shown in this vintage photo.

From teaching to conducting research

I qualified to enter University of Malaya in 1970, the first Sibu Foochow girl to undertake a B.A. programme there.

I met many undergrads from diverse racial backgrounds at the university. After graduation, I became a teacher and proceeded to teach in four secondary schools before being taken in by Mr James Wee of Sarawak Teachers Training College in Miri to become an English lecturer.

I always feel that teaching is a natural thing for me because I just love imparting knowledge to students.

Being a good reader has also helped advance my career. I was sent to the UK where I was trained to be a ‘Trainer of Trainers’. The British Council sent my group on a First Class flight to London! It was a good break for me, and I came back home even more willing to teach and train.

However, a new bug bit me – it was the ‘travelling bug’. I enjoyed going to the rural areas across the Baram to supervise teacher trainees doing their practicum, from 1994 to 2005.

I also began to be interested in anthropology and social history, upon which I did a lot of reading and started my own research.

My experience of doing numerous translation works on the history of the Foochows into English did help tremendously.

About the same time, I studied the culinary arts of the Chinese and also of the local ethnic groups.

In view of my interests, I was invited to join the Sibu Foochow Association to conduct research work on the history of the Foochows in Fujian, China.

By then, I was already retired from teaching and had gone on to become an English translator and also a photographer.

Our work culminated in the publication of four books by the Sibu Foochow Association: ‘The Trails of Foochow Pioneers’, ‘Tastes and Flavours of the Foochow’, ‘Food of the Foochows’, and ‘The History of Lau King Howe Hospital’. 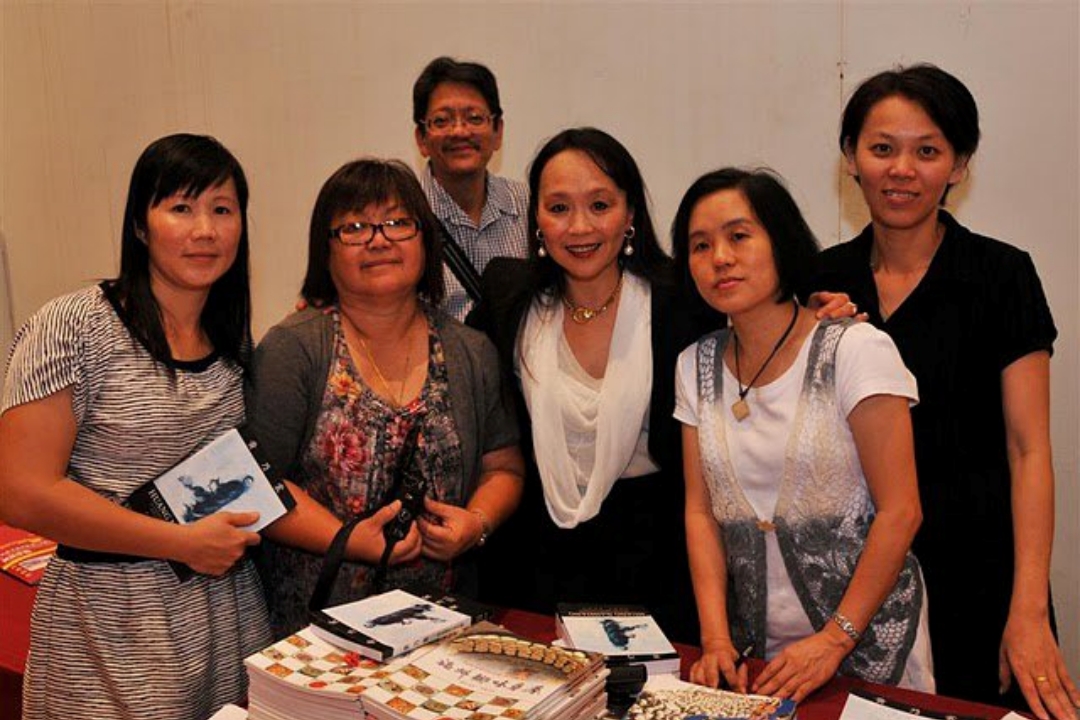 With Anne Pang (third right), author of the book ‘Huang Nai Shang’, and the Foochow Association team at an event in Sibu in 2013.

Heart still in the ‘ulu’

Now in my 70s, I still enjoy travelling to the ‘ulu’ (upriver areas).

Recently, me and a friend whom I had known since primary school went for what we called ‘a true Sarawak adventure’.

It comprised a six-hour express boat ride from Kapit to Belaga, passing the famous Pelagus Rapids along the way.

It was one of the greatest thrills of our lives – two friends, both hailing from the Rajang.

We spent six days together, traveling along the river and the roads, meeting over 10 native minority groups in the ‘ulu’, and savouring local food, including fish that was released from the hook and went straight into the pan – you could not get any fresher than that! 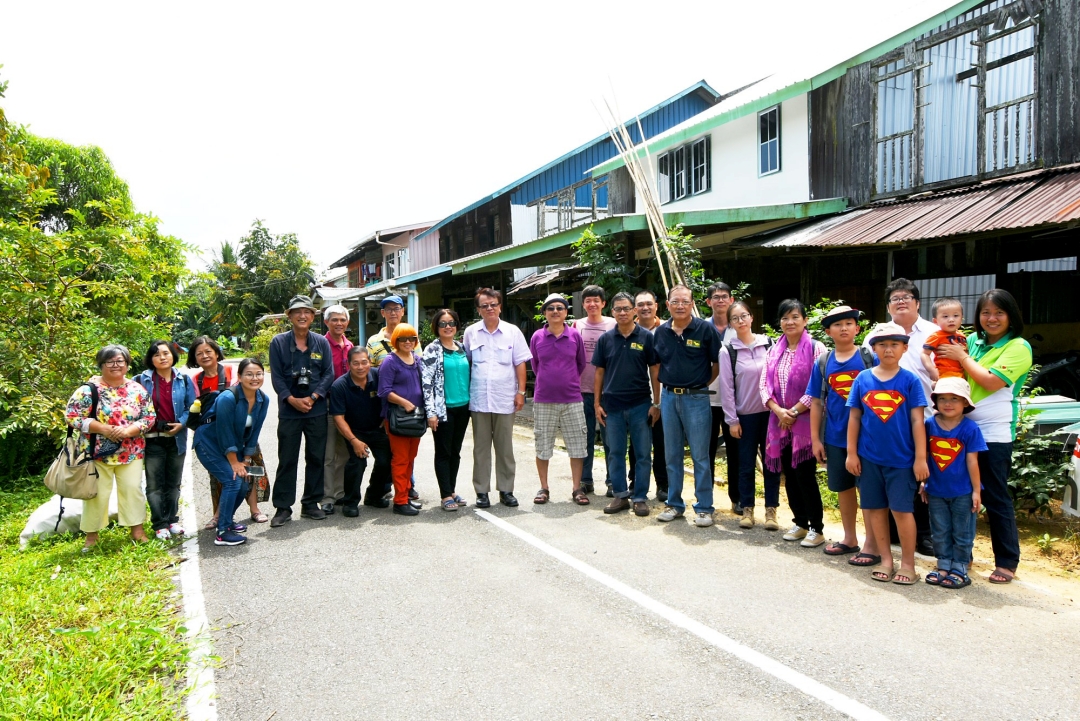 With members of the Sarawak Chinese Cultural Association during a trip to Mukah.

I enjoy sharing photos and historical notes on my Facebook page. Photography is so much a part of my life, especially now that my children are all grown up and have built their own nests.

Whenever I have a camera in my hands, I become inspired again, and I do feel that many of the images captured by me are worthy to be recorded as history of our society.

In 2006, I started contributing articles for thesundaypost, encouraged by Madam Phyllis Wong who had read my blog posts on ‘Sarawakiana’.

Since then, I have written more than 300 features.

It has been a very sweet and inspiring relationship since, and I definitely would remain loyal to the newspaper.

Also, it never occurred to me that throughout my retirement years, I would develop an interest in photo-journalism.

It was something that I never thought about earlier on in my life, although back in secondary school, I was a member of the school’s Journalists Club.

I had been the English advisor to the school’s magazine committees in schools that I had taught in over the years and throughout that time, I had encouraged many students to write and many of them had gone on to win various awards.

What it means to be a Sarawakian 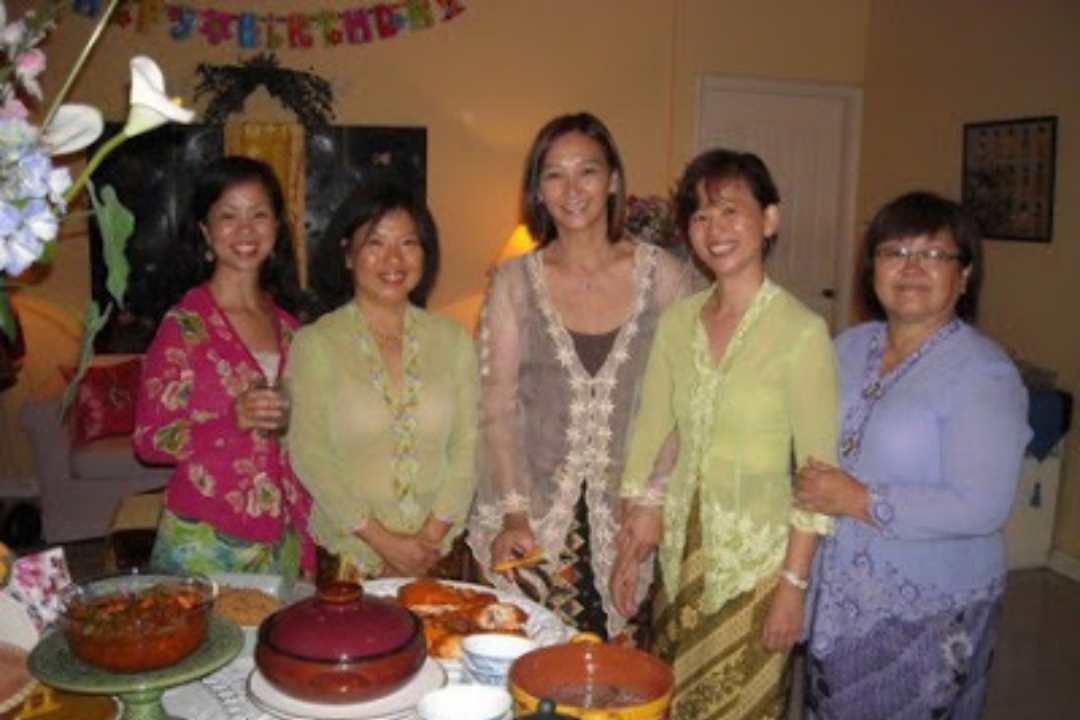 The writer and her friends donning Nyonya Kebayas and enjoying a Peranakan feast at a gathering.

For me, being a Sarawakian means having good friends from diverse racial backgrounds.

I see mosques and churches situated next to each other.

People come together for weddings, funerals and other occasions because we are friends – there is just no barrier between us.

In this sense also, I believe that the future for Sarawak lies in our diversity.

Rather than dividing us, it grows from the legacy of ‘bian’ (brotherhood).

I am just happy to have friends from different backgrounds, and that we enjoy our differences and similarities.

Just like a bouquet – it may have different flowers but together, they showcase a beautiful and balanced arrangement.

May Sarawak continue to be strong and wealthy, with all its rich resources, and may the state government continue to rule wisely.

The media is also important in our society. It is a vehicle that can help make our world a better place. Adding to that, I strongly believe that women too must have a voice in the media world, in particular, and in our society in general.