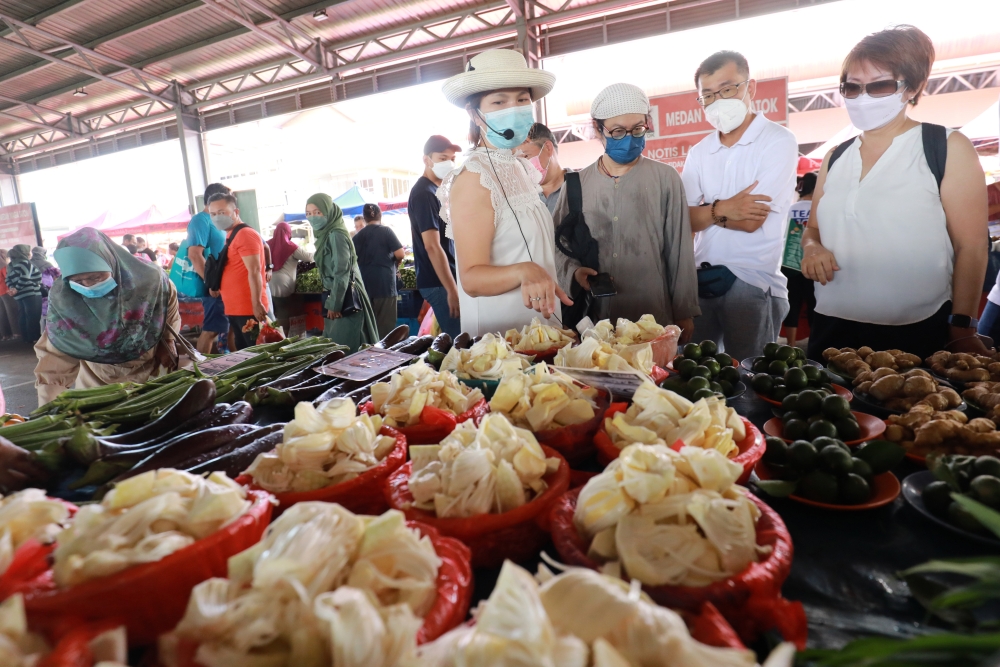 Participants take a tour around the Kubah Ria Market. — Photo by Zung Heng

A HAPPY tummy can make the day for anyone as great food makes all the challenges seem minor in comparison.

Certain foods like yoghurt, beans and eggs are known to release ‘happy hormones’ like dopamine and serotonin, which promote positive feelings like happiness and even love.

Kuchingites, especially, can consider themselves truly lucky as the city was recognised by the United Nations Educational, Scientific and Cultural Organization (Unesco) in November 2021 as a ‘Creative City of Gastronomy’, thanks to its ethnic and cultural diversity that also featured distinctive cuisines.

Kuching is among 49 cities that were added to Unesco’s Creative Cities Network (UCCN), which was created in 2004 to promote creativity as a driving force for sustainable urban development. The network encompasses seven fields: crafts and folk arts, media arts, film, design, literature, music, and gastronomy.

The ‘Creative City of Gastronomy’ is another recognition accorded by Unesco to Sarawak, following the acknowledgement of Gunung Mulu National Park as a World Heritage Site in November 2000.

As far as food is concerned, what usually comes to mind whenever Sarawak is mentioned would be Laksa Sarawak and Kolo Mee (noodle).

World-renowned celebrity chef and television personality, the late Anthony Bourdain, had promoted Sarawak to the world in 2015, via an Instagram post of ‘Sarawak Laksa’, which he hailed as the ‘Breakfast of Gods’.

Recently, four local food lovers had come together to organise and run a special trip for a select group of storytellers to Kuching. Those behind the ‘Kuching Foodish Trip’ are project founder Gerald Goh, planner Kueh Keng Seng, creative director Vancelee Teng and curator Albert Lou.

According to Goh, this trip was to celebrate Kuching as the first in Malaysia to be recognised as Unesco’s Creative City of Gastronomy. The four-day trip also exposed the participants to the city’s architecture, native culture and creativity.

Run in collaboration with Culinary Heritage and Arts Society Sarawak, the programme had invited a total of 20 VIPs, tasked with being the ambassadors of Kuching’s food heritage and diversity to the Peninsular Malaysians – and also to the world.

Among the activities listed out on the itinerary were English afternoon tea at Fort Margherita, sunset cruise along Kuching Waterfront, coffee breaks with local delicacies, ‘kuih-muih’ (local sweet treats) at Darul Hana Bridge, and dinner parties at several locations. 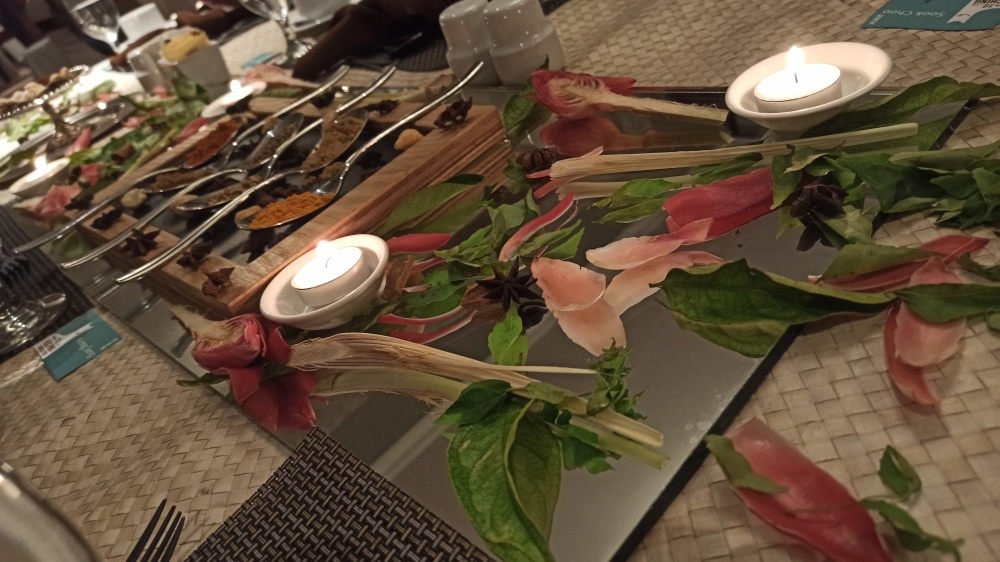 It was during one of the dinner sessions at Hilton Kuching where Chef Alex and Chef Johnson came up with an exquisite menu that brilliantly befit the theme, ‘When Herbs Meet Spices’.

For this item, the ginger oil was served inside a small vial complete with its dropper, of which the guests could control the level of the ‘heat’ – a few drops should suffice in bringing out that ‘spicy kick’, while those up for a dare could pour more.

Next came the Tiger Prawn with Ginger Flower and ‘Midin’ (wild ferns), also courtesy of Chef Johnson. This dish was quite a memorable one as the topping sauce was ice-cold, meant to soothe the heat from the ginger oil. 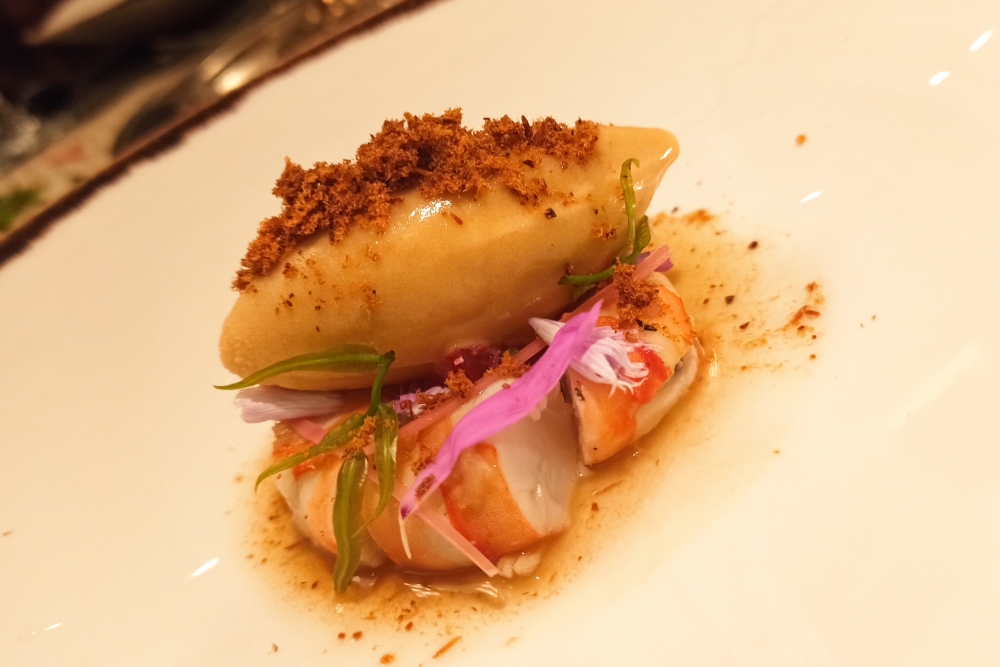 The topping sauce for this prawn dish is ice-cold, meant to soothe the heat from the ginger oil. 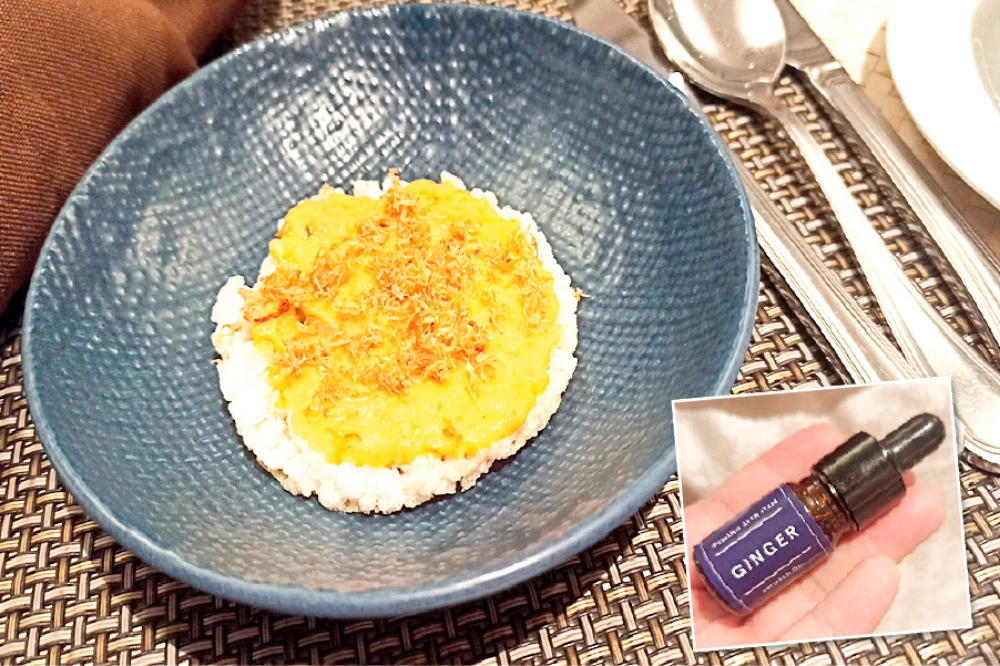 Chef Johnson’s fiery appetiser, where the diners can control the level of ‘heat’ by just a few drops of the ginger oil (inset).

The following fish course was Tiger Garoupa in Chinese Curry, with an accompaniment of Bario Rice.

Chef Alex said this recipe had been passed down three generations, and in line with the theme, the curry incorporated many herbs and spices.

The rice was wrapped in banana leaf, and just before being served, it was charred before each guest for a few seconds, making it even more aromatic.

Chef Alex said he obtained this recipe from a Malay friend, who used terung Dayak, galangal, chillies and ‘gula apong’ (nipah palm sugar) in it, and the original cooking method was boiling. 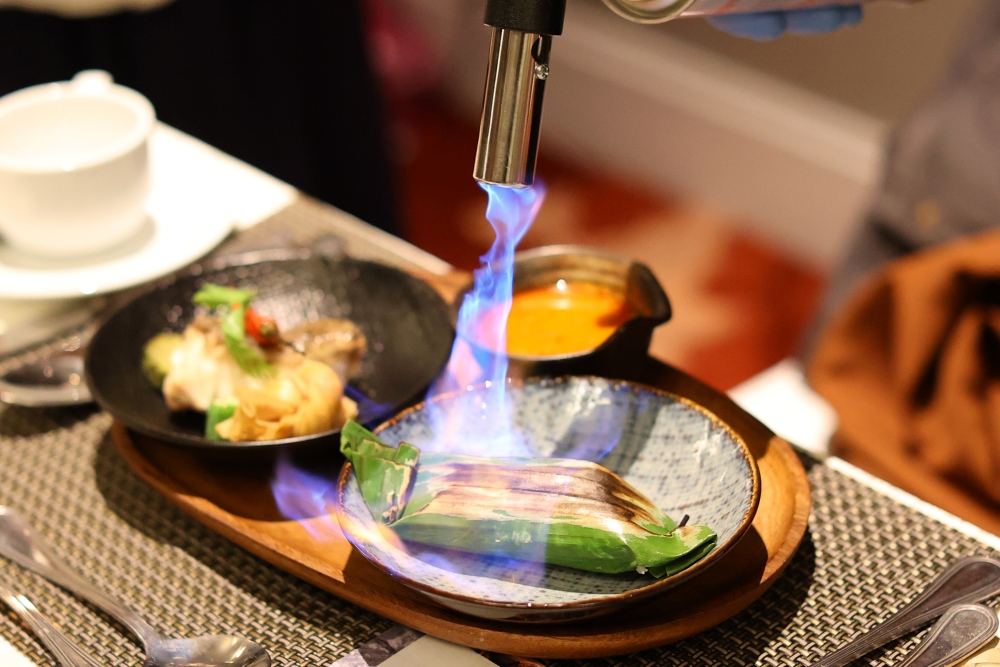 The leaf-wrapped Bario rice is given a quick torch prior to serving.

“However, I decided to do it differently, using a ‘sous vide’ machine, in which I vacuum-seal the food in a plastic pouch, and then cook it slowly in a temperature-controlled water bath. 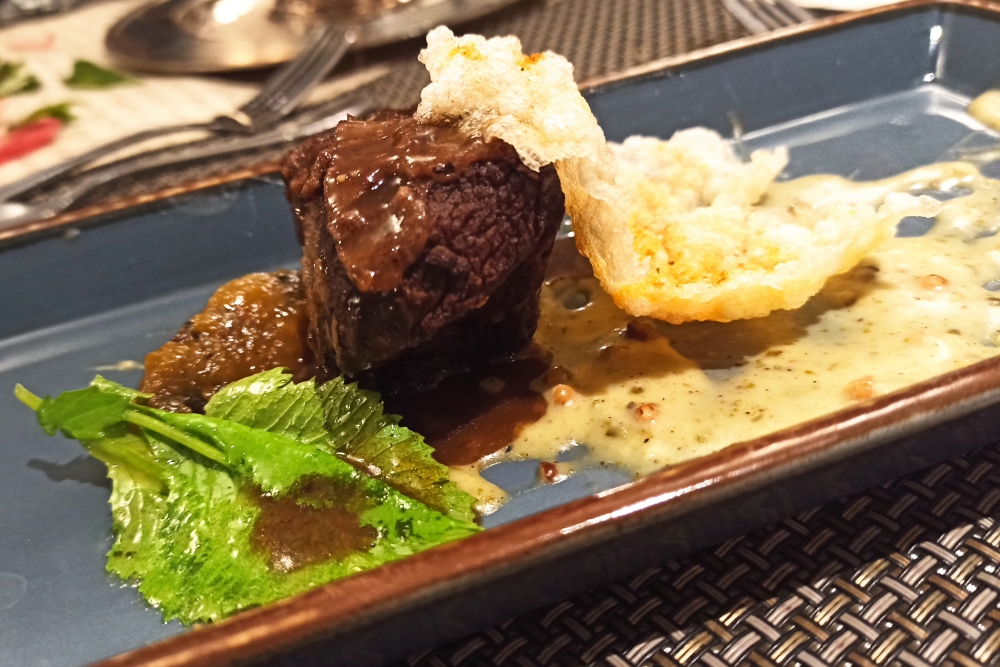 Meanwhile for desserts, Chef Johnson surprised the guests by incorporating herbs and spices into an ensemble of strawberries, local chocolate and Sarawak pineapple.

Such a variety did not result in a conventional and expectedly sweet treat; instead, it was a pleasant combination of saltiness, spiciness, tartness and sweetness that concluded the course rather well.

With 20 years’ worth of experience under his hat, Chef Alex first joined a hotel in Kuala Lumpur before going to New Zealand, and later returned to Sarawak
He has been with Hilton Kuching for the past 18 years.

His previous workplaces included Hilton Batang Ai Longhouse Resort, as well as training in Thailand before moving to Fiji.

He said he was in charge of cooking in his household as both his parents worked at a factory.

Chef Johnson is a Johorean who is currently based in Penang.

In view of the dinner’s theme ‘When Herbs Meet Spices’, he observed that more herbs were used in many Penang dishes, while in Sarawak, dried spices were preferred.

“For this dinner menu, I used native ingredients from both Sarawak and Penang.

“Like for the tiger prawn dish, I would normally use tamarind and ‘asam keping’ (dried garcinia fruit), but here, I substituted them with terung Dayak, from which the sourness would produce the acidity required.

“In Penang, we use curry more, but here, we use lots of peppercorns. Despite the substitution, the dish still produced similar results,” said Chef Johnson, adding that it was not his first to Sarawak as he had taken part in a pop-up two weeks prior.

On the surprise dessert, he said the mechanism behind it was to let the guests experience something different.

“Strawberries can easily be found here but they are sour, so I decided to use them in a different approach. As Sarawak also produces its own pineapple, I decide to use it as well.”

Chef Johnson said he started learning about cooking at age 17 before furthering his studies to Sydney, Australia. He underwent training in French cooking before returning to Malaysia and setting up his own restaurant, Gēn, four years ago.

Gēn highlights modern Malaysian cuisines, which incorporates quality local produce fused with passion and culture. It was voted into the 51-100 list of ‘Asia’s 50 Best Restaurants 2021’. 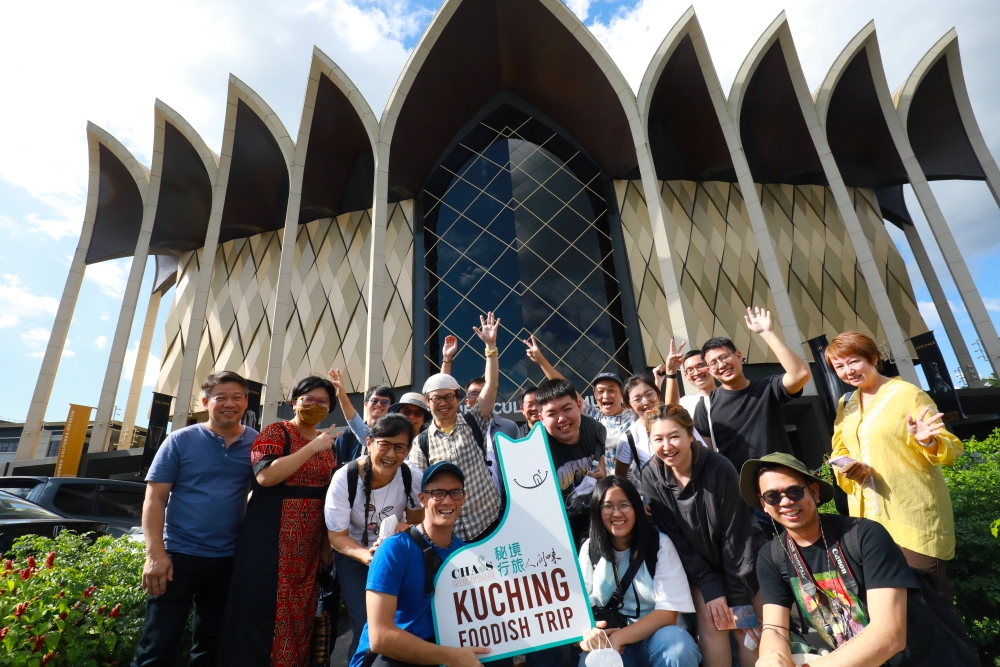 The participants take one for the album during their visit to Borneo Cultures Museum.

For one of the trip participants, TEDx Petaling Street curator/founder Jessie Ng, she truly enjoyed the experience and had always felt that Kuching was full of culture.

However, she also admitted that in terms of exploring food, Peninsular Malaysians would prefer to drive four hours from Kuala Lumpur to Melaka, or travel to Penang, instead of taking a two-hour flight to Kuching, but she was quick to add: “Not that there’s anything wrong with choosing other places within the peninsula.”

In this regard, she commended the Kuching Foodish Trip organisers for exposing peninsula-based media to what Kuching had to offer.

She also encouraged people to visit Sarawak, particularly Kuching, which had many amazing attractions including the newly-opened Borneo Cultures Museum.

“This museum, compared to others throughout Malaysia, is very awesome, quantum leaps, and interactive to visitors. It uses new technology, and has good cultural content.”

Ng, who had been to Kuching two times before this trip, said it was a different experience each time, and would want to come back again to explore more places in Sarawak.

“During this trip, we got to enjoy dinner at the Old Courthouse. It’s already a charming, beautiful place and we got to enjoy good food featuring locally-sourced ingredients.

“We also got to go to the Lau Ya Keng and tried hawker food, took a boat ride to Kubah Ria Market, visited the Fort Margherita and took a walk on the iconic Darul Hana Bridge at the Waterfront.” 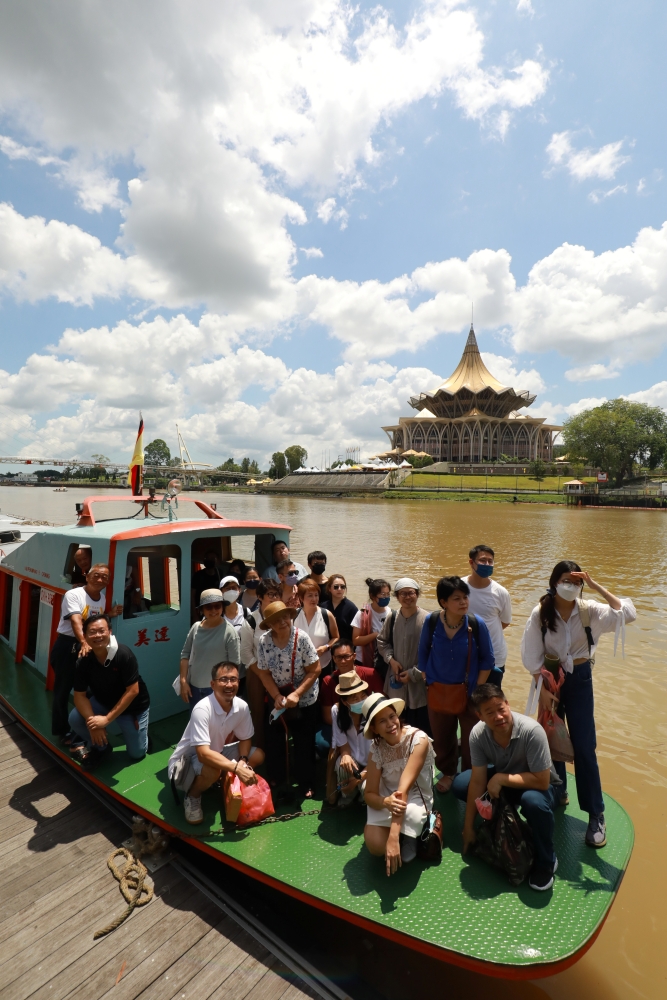 The participants pose for a group photo on board the boat meant to ferry them to Kubah Ria from Kuching Waterfront.

Ng, who had been to Thailand before, said this Kuching trip had opened her eyes to all the available ingredients that many of which had been taken for granted.

“We have to be proud of our culture and heritage, and the diverse herbs and spices that we have. Imagine if you’re a foreigner coming to the country for the first time, you would be blown away by the huge variety that can be found here, as well as the diverse races, languages and cultures.

“Don’t always envy what people have. We also have our own unique culture and identity.”

On the dinner session at Hilton Kuching, Ng was most surprised by the tiger garoupa curry dish which to her, was ‘unique, especially the presentation of the rice, which was like the ‘pulut panggang’ (A Malaysian snack of glutinous rice, rolled inside banana leaf and grilled).

“The food presentation was awe-inspiring, which feeds the eyes, not just the belly.”

Ng expressed hope to return to Kuching more frequently and hopefully for the next trip, she would want to enjoy Sarawak’s rainforests and mountains. 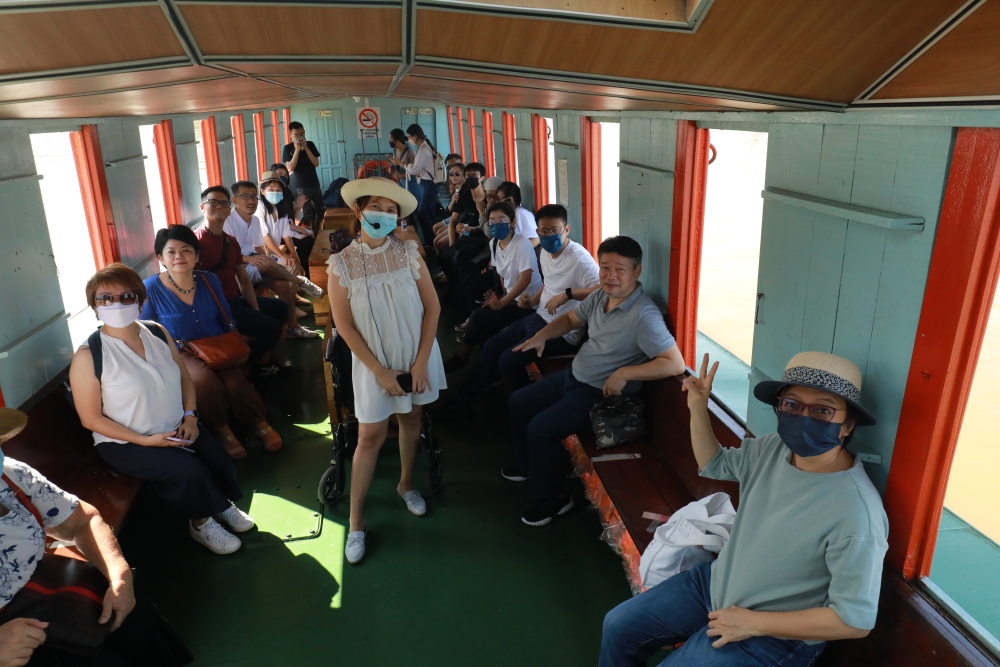