Tuesday, August 9
You are at:Home»News»Sarawak»Hydrogen bus undergoes trial operation to check on condition 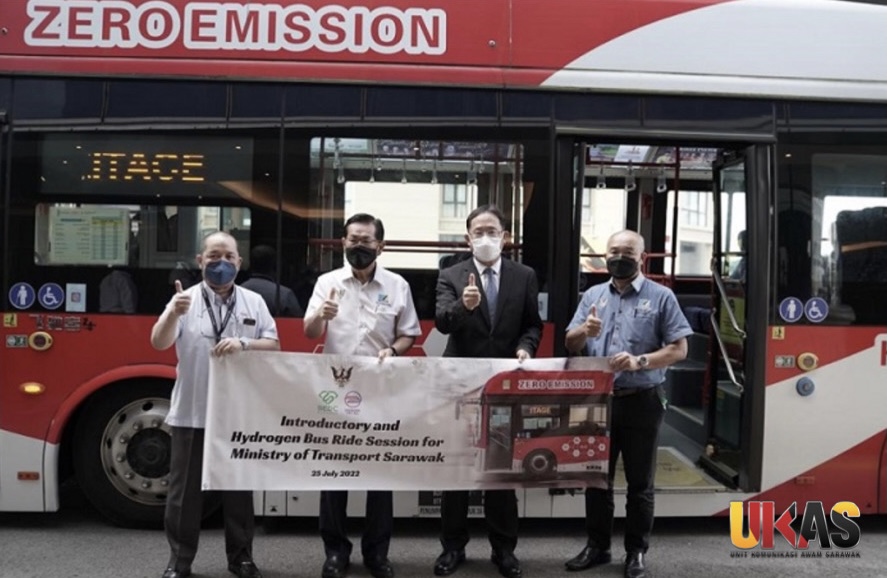 (From right) Buckland, Xing, Lee and Mazli pose for a photo next to the hydrogen bus. — UKAS photo

KUCHING (July 27): A trial operation for a hydrogen bus was held on Monday to ensure this free bus service is still in good working order, said a report from Sarawak Public Communications Unit (Ukas).

It said Transport Minister Dato Sri Lee Kim Shin and Consul General of the People’s Republic of China in Kuching, Xing Weiping, took part in a bus ride held to make sure these buses are safe to use and in accordance with operating standards.

Lee said he wanted to see and experience for himself the most recent condition of the hydrogen bus as it had been used for a trial period of nearly three years now.

“I was informed that the distance (travelled) had exceeded 58,000 kilometres and that this bus was found to have no problems,” he had said in the Ukas report.

Lee also praised the ability of existing local technicians in maintaining the safety, quality and reliability of the bus service without the assistance of technicians from China even during the Covid-19 pandemic.

“Technicians in Sarawak regularly contact this bus factory in China, and they managed to maintain safety guarantees for users while demonstrating that the local workforce is comparable to the skilled workforce abroad,” he added.

Meanwhile, Xing said the experience of riding the hydrogen bus exceeded his expectations because he found the 50-minute ride to be comfortable and safe.

“I believe the Sarawak government made the correct decision in implementing this hydrogen transportation system.

“We will continue to support and focus on this project while maintaining close relations with the Sarawak Ministry of Transport and the Sarawak government in general,” he said.

Both Lee and Xing took a trip on the said bus along the ‘City Centre Heritage Circle’ route.