Monday, December 5
You are at:Home»Sports»Football»Kim Swee’s brave decision pays off 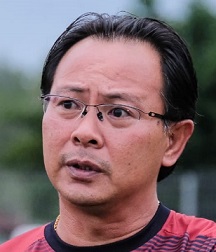 KOTA KINABALU (July 27): Datuk Ong Kim Swee’s brave decision to send on fringe players against PJ City FC paid off as Sabah FC fought back from a goal down to claim a 2-1 Super League win at the MBPJ Stadium on Tuesday.

In came the likes of veteran Alto Linus, Nazirul Naim Che Hassim, Abdul Hanafi Tokyo, Ummareng Bachok and Farhan Roslan, all of whom were given a rare start while Maxsius Musa and Irfan Fazail entered the fray in the second half.

And they did not disappoint by producing a match winning performance, although they did it the hard way when Darren Lok glanced a header past goalkeeper Khairul Fahmi Che Mat to give PJ City a 34th minute lead.

It all changed in the second half as the Rhinos returned with an improved performance and it did not take them long to find the equaliser.

Alto and Nazirul showed great combination down the left flank where the former picked his teammate with a defence-splitting pass but PJ City goalkeeper Kalamullah Al-Hafiz Mat Rowi rushed off his line to block the effort.

However, Taiki Kagayama was at the right time and place to slot the rebound into the unguarded net just three minutes after the break.

There was no turning back for Sabah FC as they improved as the game progressed and in the 75th minute, they were rewarded with the crucial winning goal.

It was up to the squad’s fringe players yet again where Irfan slid home at the near post after fellow second half substitute Maxsius made the cross from the left.

Khairul then came to the Rhinos’ rescue in the 84th minute as the former international produced a superb reflex save to deny R Kogileswaran from point-blank range.

“It was not an easy game,” said Kim Swee after th game.

“We were without four (foreign) imports and the despite waiting until the last moment, I decided to leave out Baddrol and Park as they are not fully fit yet.

“However, I have to give credit to the new faces who gave a very good performance on the night.

“They may not be playing regularly (in the first eleven) but they showed great determination and commitment as well as playing with the right attitude and mentality … more importantly they have self-belief.

“With all these qualities and playing to the coach’s instructions, the chances of winning will always be there.

“We did just that despite missing several key players … it was a vital three points that we won,” he said.
Commenting further on the game, Kim Swee admitted the squad did not play to what was expected initially but it all changed when the equaliser came.

“When I fielded half of the team with new players, their confidence level was not what we expected but we got the equaliser and that was the turning point.

“The players showed more confidence not only upfront but also at the back … they did really, really well against a good team like PJ City.

“It is very important for us (that) we are still chasing for what we hope for at the end of the season,” added Kim Swee.

With the win, Sabah FC moved to 28 points from 13 games and currently trailed leaders Johor Darul Ta’zim (JDT) by a single point. JDT however have played two games less.

Meanwhile, Kim Swee hoped some of the key players would have recovered from injuries and fatigue as the Rhinos prepare for the next game against Melaka United here on July 31.

The match will mark the fifth match that Sabah FC will play in the space of two weeks and Kim Swee has expressed his worries on the players’ condition.

“We are gonna play against Melaka United in four days time and the match just now (against PJ City) was our fourth in 11 days.

“I will have to look at the condition of the players when we return home.

“I’m not going to think of how we are going to play (against Melaka United) but because more importantly for the players to recover fully, not only (physically) fit but mentally fit … of course we have plan but we cannot take things for granted,” he said.