Sunday, November 27
You are at:Home»News»Sabah»(VIDEO) School children use pipeline to cross river in Keningau 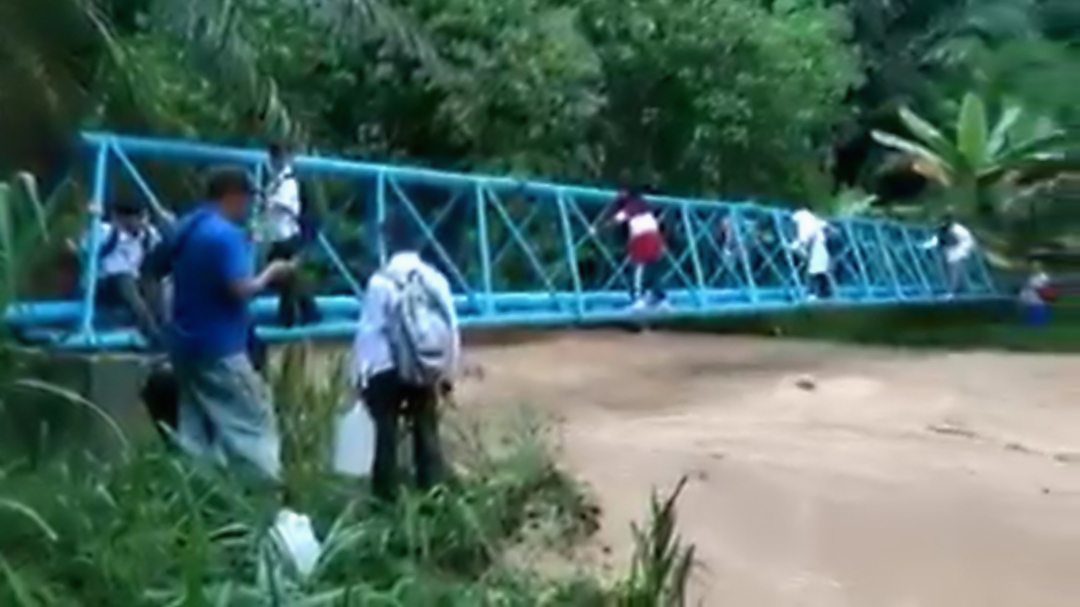 A screengrab from the video showing school children risking their lives crossing a fast-flowing river via a pipeline in Kampung Mansiang Baru, Keningau. – Screengrab from Facebook

KOTA KINABALU (July 28): Another video of schoolchildren in the interior of Sabah risking their lives by crossing a fast-flowing river with a pipeline went viral on social media.

The video was taken in Kampung Mansiang Baru, Keningau and shared on Facebook by user Siti Hafizah Leezah who explained in a separate post that they have been promised a new bridge by the government through Assistant Minister of Community Development and People’s Wellbeing, Flovia Ng.

However, the promise to build a new bridge that is supposed to start construction in April this year has not been fulfilled until today.

Flovia’s latest statement on this issue was “I am looking at this matter seriously.”

In the one-minute and 32-second video, a man was talking in the background explaining the situation of children crossing the river coming back from school.

The post was shared by thousands of Facebook users who expressed mixed reactions – some are blaming the government for not fulfilling its promise, while many blamed the parents for allowing their children to risk their lives for education.

This kind of video is not shocking anymore, however it is terrifying especially when similar stories have been highlighted in the media.

Roads in many areas in the interior of Sabah are normally connected by wooden bridge or suspension bridge.

Problems normally occur during rainy seasons as many of these poor infrastructure facilities have collapsed or swept away by the water. It happened everywhere in Sabah.

In May, a road linking five villages in Kota Belud was cut off after a bridge collapsed following continuous heavy rain. It caused farmers to lose their income, children missing schools and patients unable to go to the hospital for treatment or medical follow-ups.

In April, a video of primary school pupils in Nabawan using a bamboo raft and a zipline to get to school also caught the attention of netizens.

In February, 58 students from five villages in Pitas had to take the boats to school after a suspension bridge was damaged.

In January, photos of Primary One students on their way to their school SK Mangkapon Pitas in a small boat without life jackets were also shared on Facebook after their voices were not taken seriously, although it had been shared through ‘the right channel’.

Also in January this year, images of school children having to cross a dilapidated suspension bridge in Kampung Nelayan Tengah to go to school went viral resulting in the closure of the bridge.

Two years ago, three students from Kampung Gusi in Ranau were injured after they fell from a suspension bridge while trying to get internet connection for their online classes – one of them suffered a fractured leg.