Monday, August 15
You are at:Home»Columns»Nature Matters»The much maligned mangrove forest 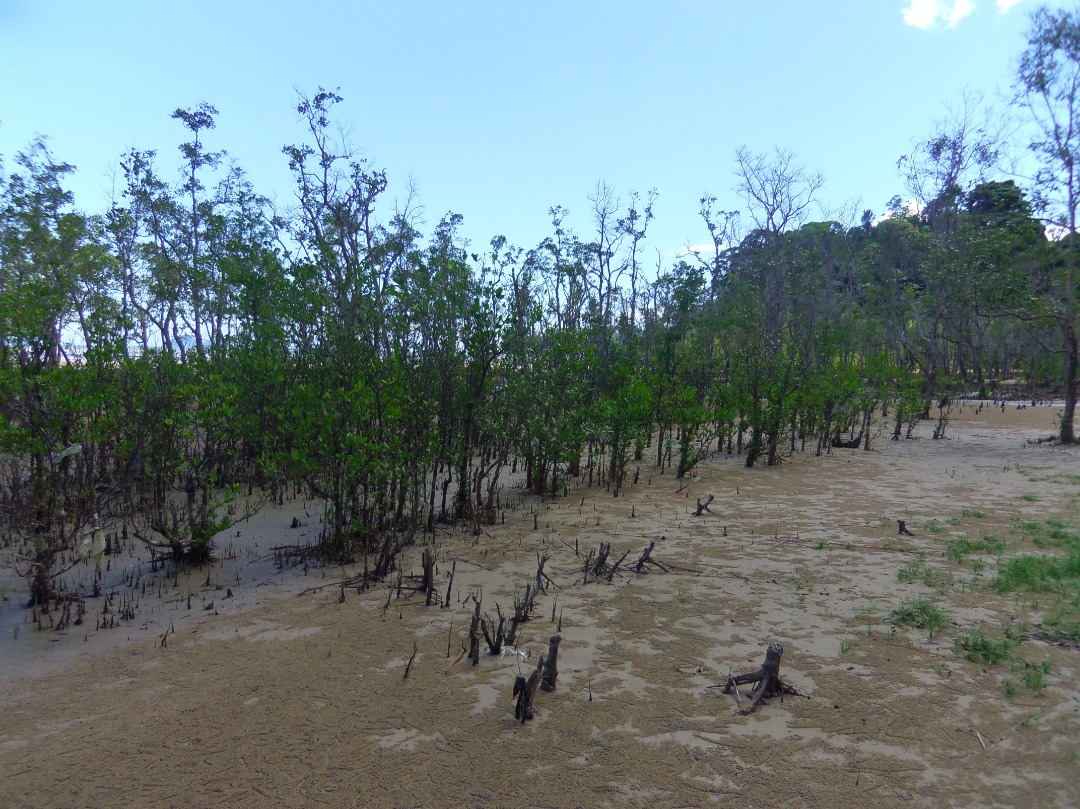 DID you know that only five days ago, on July 26, was the International Day for the Celebration of Mangrove Forests? I doubt it, for we have tended to use the derogatory word ‘swamp’ in association with mangroves and wrongly believed that these swamps are there to be drained and reclaimed.

I doubt whether 50 per cent of my readers realise that Kuching and other estuarine-located cities and towns, not only in Sarawak and Sabah, but worldwide are now concrete structures built on former swampland.

Thousands of hectares of land in Kuching and Miri were once tidal estuaries of large rivers with mangrove trees hosting the silt supplied by the rivers.

Indiscriminate removal of these trees in the name of human progress now threatens our settlements as sea level rises owing to climate change.

It was gratifying to read in thesundaypost (June 12, 2022) a refreshing article by Antonia Chiam entitled: ‘Premier moots Borneo-wide mangrove conservation,’ quoting Datuk Patinggi Tan Sri Abang Johari Tun Openg as stating: ‘Maybe we can have a collaboration with Indonesia within Borneo for the conservation of mangroves and storage of carbon in mangroves.’

He was referring to the Wetlands Nature Park Ramsar.

Three cheers for the Premier’s intuition in recognising the physical and social importance of mangroves.

SAGO and the Nipah Development Board will, it is intended, manage and control mangrove areas. The organisers of the Borneo Rainforest Music Festival deserve great praise for declaring that 40 per cent of the online charge per ticket would go to the purchase of mangrove saplings.

Generally, mangroves may be found in sheltered tropical and subtropical coastal waters lying between the latitudes of 25 degrees north and 25 degrees south of the Equator.

These limits are very variable and depend much on local climates.

In Eastern Australia, one species may be found as far south as 38 degrees and another species as far north as 32 degrees on the Atlantic seaboard. Depending upon high temperatures to stimulate their growth, climate change is slowly stretching the limits of mangroves further north and south.

Covering an area of almost 200,000 square kilometres globally, some 54 true species of mangrove tree may be found. All species are halophytes with a tolerance of salty water.

How do mangroves manage to live in saline waters? 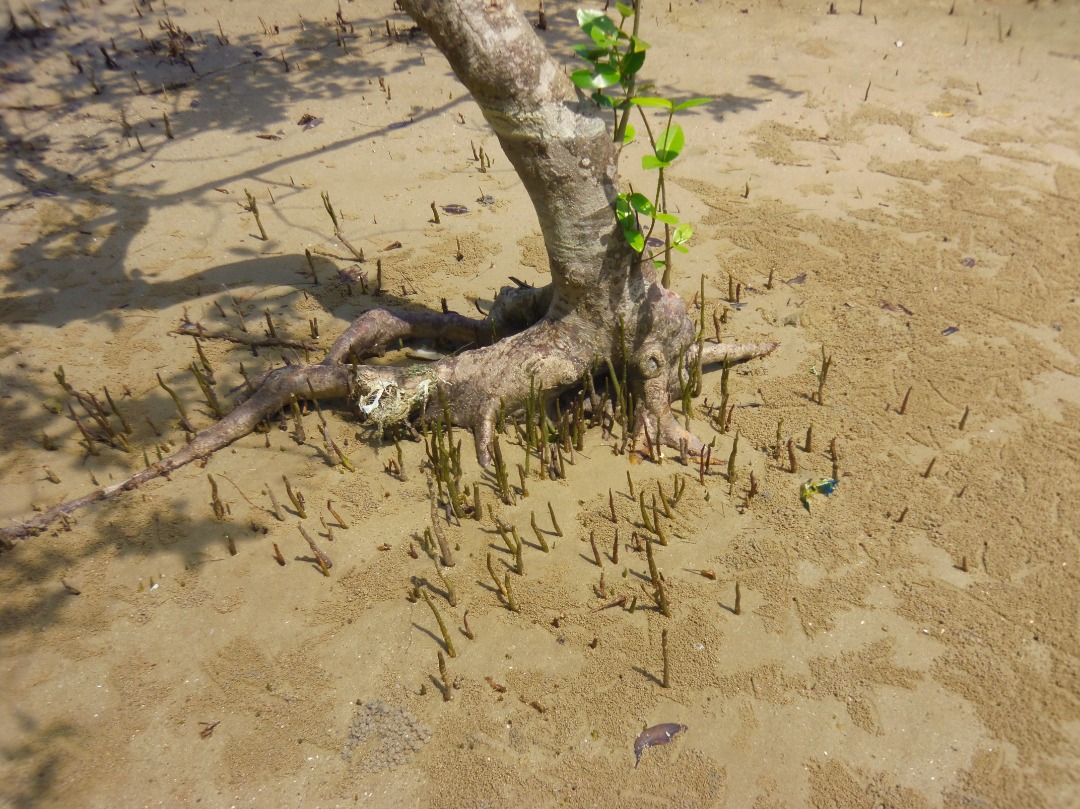 In the genera Rhizophora and Bruguiera, these mangrove plants can almost exclude 90 per cent of all salt from entering their vascular system; thus creating a barrier against osmosis.

Other species deal with salt as it enters the plants and these are known as ‘secretors’, exuding saltwater through special pores in their leaves. As the saltwater evaporates, salt crystals form on the leaf surfaces.

Another handicap mangroves have overcome is the lack of oxygen in the soils in which they grow. They need their roots to trap oxygen in order to stimulate plant growth so they have evolved special root structures.

The genera Sonneratia has developed cable roots with vertical roots (pneumatophores) springing up from the ground to heights of 20 centimetres to 50 centimetres. These vertical roots act like snorkels and contain special pores to absorb oxygen and at high tide, these close so that saltwater cannot enter the root.

Other genera such as Rhizophora have developed stilt roots to lift the plant’s trunk above high tide level.

How do these types of tree reproduce?

Surprisingly, this is with the help of the waves and tides. The mangrove tree’s flowers are pollinated by insects, before producing seeds which immediately germinate into seedlings.

These little seedlings, known as ‘propagules’, fall off the tree and are swept away by the tides and ocean currents before becoming waterlogged and sinking to the silty seafloor often far away from their parent tree.

Mangroves provide a habitat for many species of bird, animals, crustaceans, fish, insects, birds, reptiles, other plants and even microbes and fungi feeding directly off the leaves or living off the decaying matter. Crabs, fish and shrimps spend their early lives within the shelter of the mangrove roots before embarking into deeper waters.

Thus, these plants act as nursery for fish species such as the grouper before it will venture into the open ocean as an adult fish.

In fact, mangrove roots act as filters in trapping riverine silt and mud, binding these constituents together. They act as cleansers or purifiers, absorbing nutrients from riverine waters some of which may, otherwise, harm coral reefs and seagrass beds. Absorbing and storing three times more carbon than most tree species, when the leaves fall off the tree or the tree dies, the stored carbon is buried in the silt for posterity.

This type of carbon storage is referred to as ‘blue carbon’.

Whilst mangrove coverage worldwide is less than two per cent of marine environments, it accounts for none less than 12.5 per cent of carbon burial, in fact twice as much as seagrass.

Specific inhabitants of the mangroves 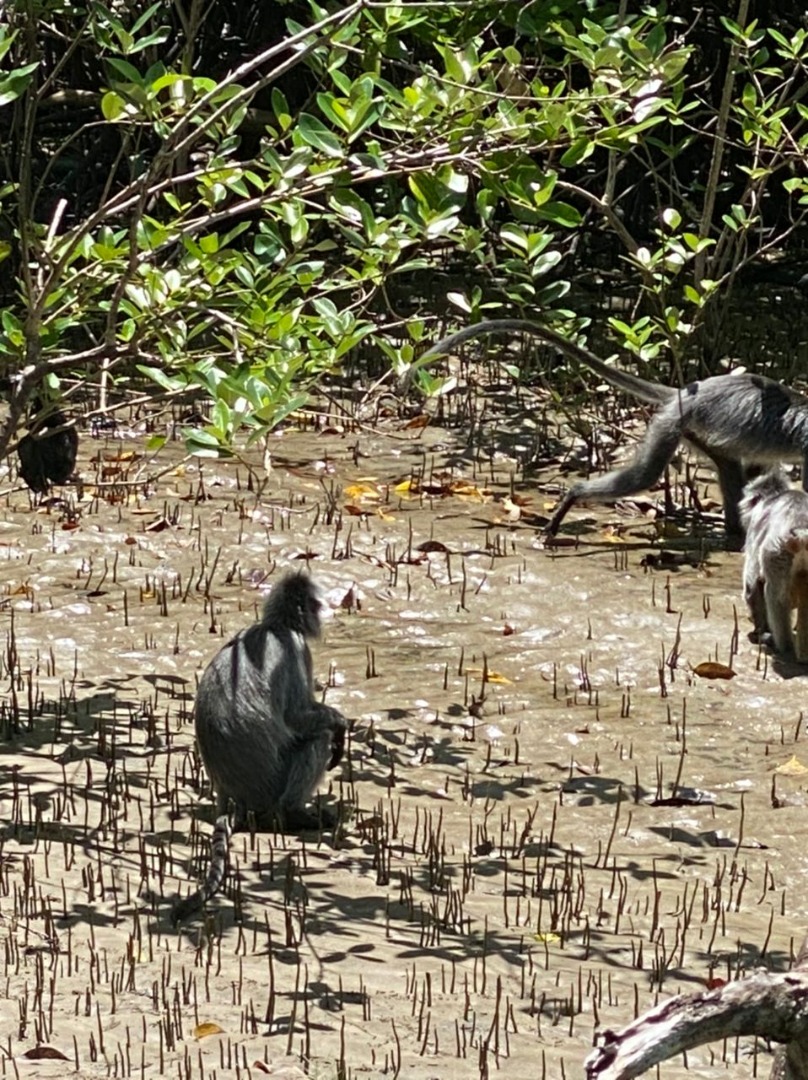 Photo taken by Mark Tan of macaques searching for crabs in the silt of Bako. Note the pneumatophores.

If fully documented with every species that occupy the mangroves, the coverage of this newspaper would not suffice!

Here is but a snapshot of some of the prominent species found.

In Borneo, the saltwater crocodile is the apex predator of the food chain and is considered to be the most aggressive of all reptilian species.

Recently, on a visit to Buntal, I observed a young saltwater crocodile, about 1.5 metres long, emerging from an estuarine creek and clambering into nearby mangrove forest quite fearless of human presence!

Proboscis monkeys and macaques may be seen at Bako National Park in its mangrove fringing shores. Macaques love scavenging for crabs amongst the silt and mud beds there at ebb tide. Mudskipper fish abound and can even be seen to climb trees with the aid of their pectoral fins. Fiddler crabs and mud lobsters may also be found.

One of the most amazing mammals is the bat, which feasts on the Sonneratia variety of mangrove. As this plant opens its flowers at dusk, the scent of the nectar entices bats for a drink! Some species of bat will fly three times a night, covering a distance of 50 kilometres for nectarial delights.

Fireflies with their bioluminescence at night are attracted to the brackish waters where they prey on mangrove snails entering the snails’ shells as larvae and then, injecting a paralysing toxin and enzyme into the bodies before eating them. Their night-time displays as fully grown flies appear as flashing Christmas tree lights.

Perhaps the most threatened species of animal life in the mangroves is the Royal Bengal Tiger referred to as ‘the man-eater’ of the Sundarbans of the Ganges delta.

These felines feed not only on land animals but also on fish, frogs and lizards. It is estimated that there are only 500 of these cats left as they are threatened by human encroachment into their habitats and more recently, by rising sea levels and coastal erosion with an average loss of 700 metres of coast per annum.

Not only do they act most significantly as wave force breakers against storms and tsunamis thus protecting coastal properties and as coastal stabilisers in trapping of river silt, but they provide a very useful source of fuel for coastal communities.

As great carbon dioxide absorbers, they are currently reducing the greenhouse gases in our atmosphere. They also filter polluted water, improving water quality to communities.

What is the answer?

It is simply through the creation of mangrove planting projects sponsored by governmental and NGO funding to provide saplings to plant in intertidal zones.

Vast sections of our Malaysian coastline are vulnerable to the forces of nature and protection, as they say, is better than cure!

We have already seen a worldwide distribution of Covid-19 vaccines; let us now focus on longer term projects of the coastal protection of people’s lives and the wildlife that mangrove forests provide.