Friday, December 2
You are at:Home»Business»Graphjet set for US listing via De-SPAC transaction 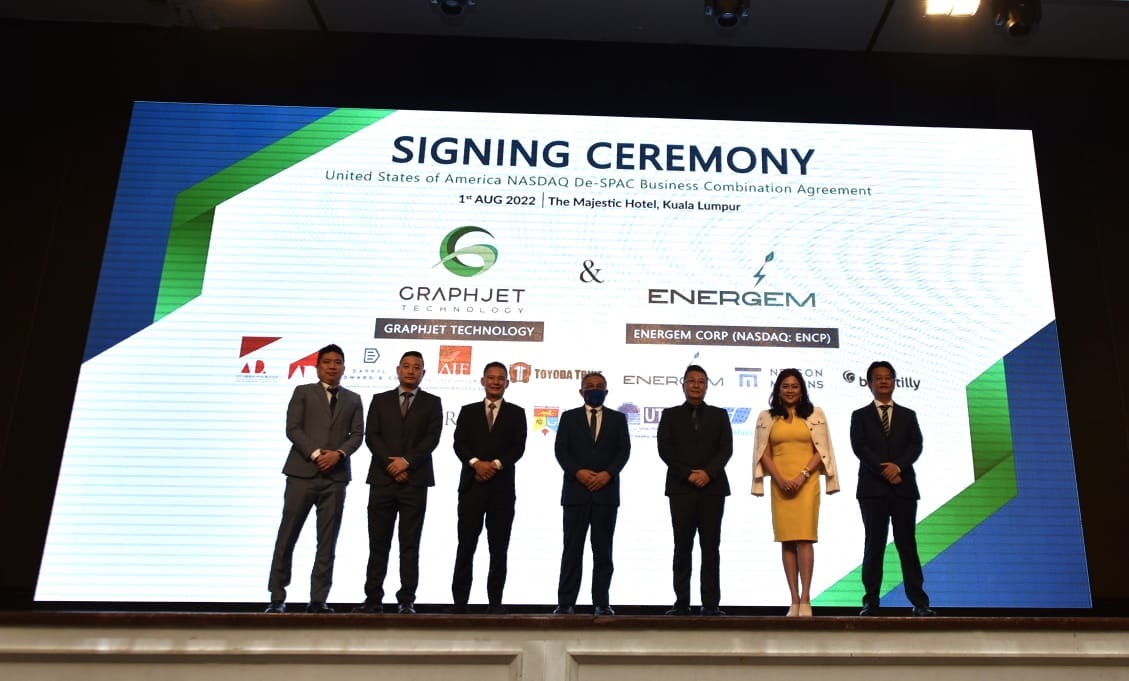 Adham (middle) witnessing the merger agreement between Graphjet, represented by Lim (third left) and Energem represented by its chief executive officer Hoo Swee Guan (right) alongside other directors from both companies.

KUCHING (Aug 2): Graphjet Technology Sdn Bhd (Graphjet), an innovative research & development firm that specialises in the production of graphene and graphite has entered into a merger agreement with Energem Corp (Energem).

The merger with Energem, a Special Purpose Acquisition Company (SPAC), will see Graphjet become a publicly listed company and trade on the Nasdaq Stock Exchange (NASDAQ) under the ticker symbol “GTI”. The targeted listing date of Graphjet is in October 2022, with a pro forma enterprise value of US$1.49 billion upon listing.

The business combination will provide around US$115 million to Graphjet, which will be used for the business expansion of Graphjet.

The momentus signing ceremony was held in the presence of Datuk Seri Dr Adham Baba, Minister of Science, Technology and Innovation.

Graphjet, an innovative graphene and graphite producer, has successfully developed a revolutionary patented technology that will transform palm kernel shell, a waste from palm kernel production, into high-demand graphene materials, at a significantly lower cost than the current graphene production.

The average selling price for graphene ranges from around USD300 to USD400 per gram, but Graphjet’s technology will lower the price to between US$20 and US$25 per gram. The technology is the first of its kind in the world. It will disrupt the advanced materials industry, given the massive potential of graphene in the applications of various high-technology industries.

Graphjet Technology Sdn Bhd Chairman Mr Lim Hooi Beng said, “Our success will put Malaysia on the world map as the first in the world to transform renewable raw materials such as palm kernel into graphene.”

Graphene is the thinnest and lightest known material, has about 200 times the strength of steel and is also one of the best conductors of electricity and heat that is visually transparent. The discovery of the Super Material was attributed to the Nobel Prize in Physics 2010.

A combination of all graphene’s amazing properties could create an impact on the scale that was last seen with the Industrial Revolution.

Many applications are currently in development, with early success seen in smartphone touchscreens, batteries, electric vehicles, inks, and composite and filtration technologies.

According to Lim, the success of the development of the patented technology was done in collaboration with the best researchers in the world to ensure the sustainability and assurance of the single-layer graphene produced.

Meanwhile, local technology higher institutions’ research partners are both Universiti Kebangsaan Malaysia (UKM) and Universiti Teknikal Malaysia Melaka (UTeM). UKM is one of the top public universities in Malaysia, while UTeM pioneers and leads in the engineering technology program.

At the same event, Graphjet will also mark its foray into the export market with an exclusive distributorship agreement with Toyoda Trike Inc (Toyoda), Japan’s developer and manufacturer of pure electric vehicle (EV) and electric bicycles.

Toyoda is related to the founders of Toyota Motor Corporation, the largest automobile manufacturer in the world, and its largest shareholder is Asia Development Capital Co. Ltd (“ADC”), a public-listed company on the Tokyo Stock Exchange.

The exclusive distributorship agreement with Toyoda will generate significant earnings growth for both companies and is expected to contribute around USD30 million of revenue per year for Graphjet.

The exclusive distributorship agreement will give us an opportunity to expand our products into Japan. As the EV industry’s key raw materials, the prospects of graphite and graphene are enormous.

“The first phase of our expansion is to focus on Japan’s collaboration, and we are looking forward to expanding into the US and European countries where demand for graphene is on the rise,” Lim said.

Lim added that the merger agreement with Energem is timely as it put Graphjet on an accelerated growth trajectory with a plan to set up the Group’s manufacturing plant in Kuantan, Pahang.

“Given the ample source of raw materials (palm kernel) in Malaysia, this gives us a competitive advantage in terms of the logistics and sourcing of the raw materials for our production,” Lim said, adding that the gross profit margin of the products can improve to around 60 per cent with the setup of the manufacturing plant.

“The applications of graphene in renewable energy segments and our production using renewable sources put us as one of the leaders in the push towards net zero emissions in carbon globally,” Lim said, adding that the Group aims to revolutionise the advanced materials with a focus on sustainability.