Saturday, December 3
You are at:Home»News»Sarawak»More Heart of Borneo scientific expeditions ahead for Forest Dept 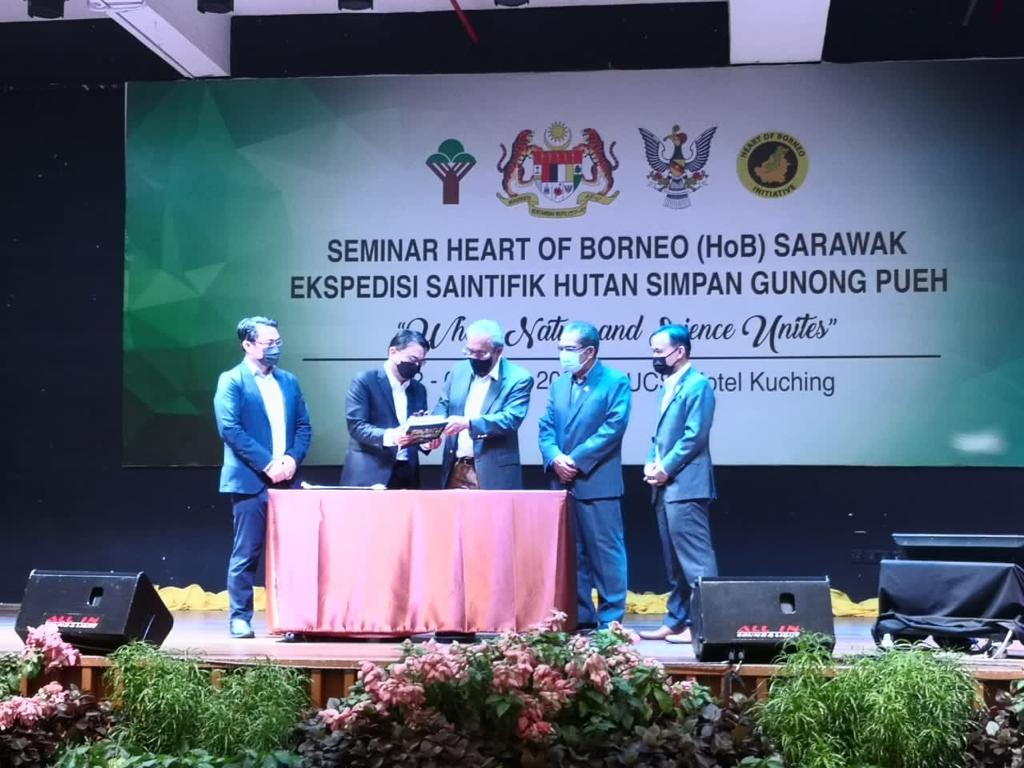 Hamden (second left) shows Len Talif one of the six publications from the HoB Series.

“SFD is also planning to conduct a scientific expedition in the Forest Management Unit (FMU) within the HoB as a complement to conservation efforts conducted by the licence owner as well as to support FMU in their certification.

“The FMU is now managed based on the principles of sustainable forest management (SFM) and the requirements of the Licence Agreement of the Sarawak government,” he said during the HoB Scientific Expedition to Gunung Pueh Forest Reserve Seminar.

Hamden said SFD welcomed licence owners to collaborate with the department as well as communities residing within the FMU to explore the forests as well as document scientific and social data.

“This will in turn help address and solve issues pertaining to forest management in the areas,” he said.

Apart from scientific expeditions, he said SFD had also conducted numerous studies and research work with department agencies, non-governmental organisations (NGOs), and tertiary institutions to contribute to conservation efforts in the HoB Initiative.

Among them were the documentation of rare, threatened and endangered tree species within the HoB based on the International Union for Conservation of Nature (IUCN) 2020 list; High Conservation Value Forests Assessment within the Sarawak HoB area at Ulu Trusan FMU in 2017; the study of mineral contents by SFD at various saltlicks found within the HoB; species-specific studies such as the conservation and management of proboscis monkey within the permanent forest estate (PFE), ecology and behaviour of clouded leopard, activity pattern of estuarine crocodile in Kuching Wetlands, and ethnobotany of the monocotyledonous plants in HoB areas; and installation of camera traps in ecological research areas in HoB to capture the presence of wild animals such as in Kuching Wetlands National Park, Bako National Park, Bahau Permanent Forest, and Usun Apau National Park in Baram.

On the seminar, Hamden said this followed the Gunung Pueh Forest Reserve expedition in 2020.

“Due to the Covid-19 pandemic at the time, the expedition was limited to a total of 150 SFD researchers and support staff from numerous divisions participated in the expedition.

“Mostly new and young researchers who had just joined the department participated in the expedition and this augurs well for the future of biodiversity conservation in Sarawak,” he said, adding that the two-week expedition was a success.

Organised by SFD, the two-day seminar aimed to share scientific research data and findings; exchange ideas and identify issues that will strengthen, improve, and enhance current strategies and initiatives; and enhance networking and cooperation among department staff.

Around 200 participants comprising staff from various agencies and NGOs within Sarawak and Peninsular Malaysia, as well as representatives from local communities residing around Gunung Pueh Forest Reserve attended the seminar.

During the event, Len Talif also launched six publications from the HoB Series.