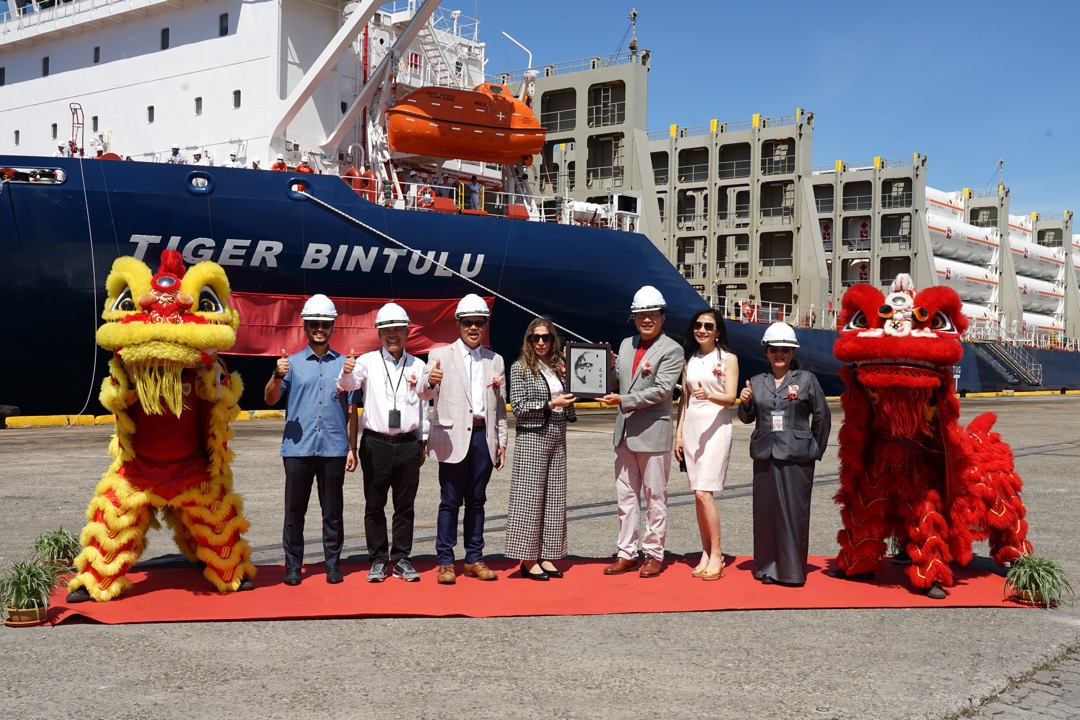 The meaningful event was attended by various stakeholders such as Petronas, Bintulu Port Authority, state government agencies as well as main logistics players.

BPHB’s Group chief executive officer Dato Mohammad Medan Abdullah said the maiden voyage of Tiger Bintulu to BPSB was another milestone achieved by all the parties involved in the endeavour especially Tiger Gas, Petronas, Bintulu Port and the State of Sarawak where the Bintulu LNG plant and the deepwater port of Bintulu are located.

For Bintulu Port, he said the dynamic mix of Bintulu Port’s 39 years experience in handling LNG, its location next door to the third biggest LNG terminal in the world in a single location and the presence of the BICT with reliable services coupled with a world that is gearing towards a future that is cleaner and greener, made Bintulu Port the ideal location to set up an LNG ISO tank hub.

Tiger Gas Group chairman Gerry Wang in his speech thanked everyone present at the ceremony, highlighting his appreciation for the support that Tiger Gas has received from all stakeholders from the beginning of the collaboration to reaching this milestone.

He believed the collaboration will only grow stronger moving forward in making LNG more accessible to all.

Petronas, represented by Malaysia LNG Group of Companies’ managing director and chief executive officer Mohamed Syazwan Abdullah @ Laga Jenggi, extended their congratulations and commendations on the successful maiden voyage and launching of Tiger Gas vessel, Tiger Bintulu, while vividly recalling when it all started in 2015 between both Petronas and Tiger Gas and hoping that such collaborations will continue between all the parties involved.

As a homage to Bintulu and appreciation towards Bintulu Port which has been with Tiger Gas from the beginning in setting up the filling facility till its successful commencement, Tiger Gas has graciously appointed Datin Noor Hayati Abdul Ghny to be the sponsor lady for the Tiger Bintulu vessel.

The significance of Tiger Bintulu’s successful maiden voyage and its frequent calls to Bintulu Port for LNG ISO tank operations will not only secure Bintulu Port’s position as the first port in Malaysia to export LNG ISO tanks in a large scale but also will be a game changer to propel Bintulu Port’s container volume to potentially its biggest growth to date.

To complement its existing container operations fleet and support the LNG ISO tank handling operations, BPSB will be adding one new unit of Quay Crane by the end of the year.

Bintulu Port is confident that the diligent efforts made by all parties over the years will not only lead to the establishment of Bintulu as a significant LNG ISO tank hub in the Asean region but also a hub that will set the bar and precedence to aspiring LNG ISO tank terminals globally, one LNG ISO tank at a time.