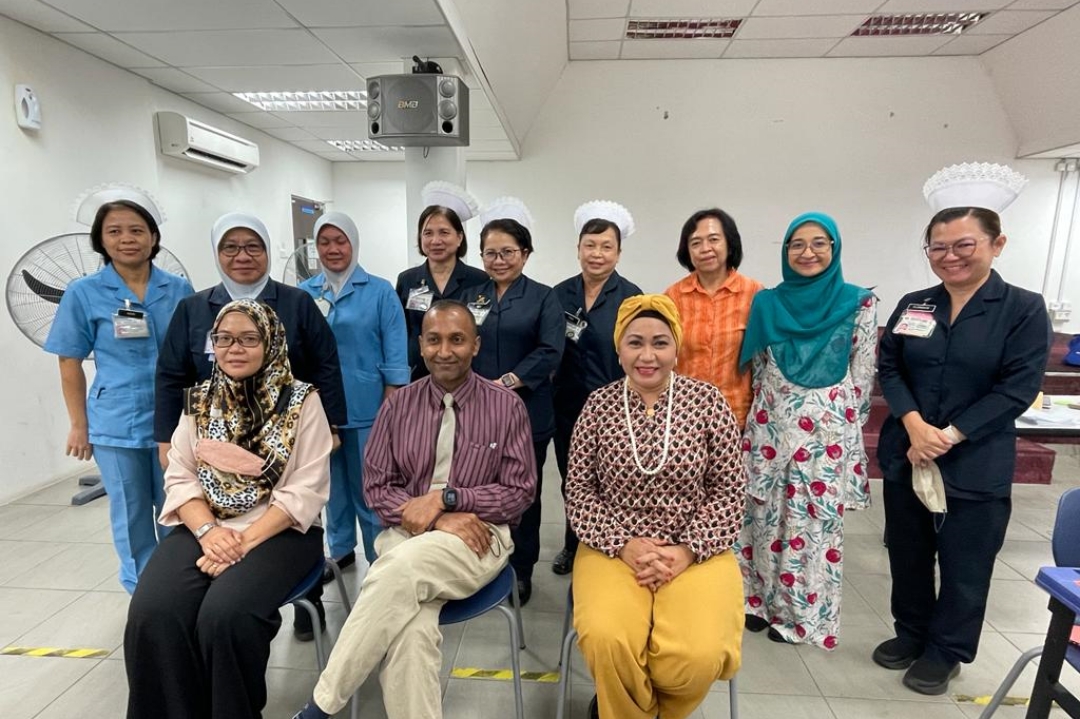 (Seated from left) Roslinda, Dr Nanthakumar and Dayang, with Patimah (standing left) and the hospital staff in a group photo.

SIBU (Aug 5): About 300 delegates comprising doctors, nurses, nutritionists, teachers, entrepreneurs and parents from all over Malaysia are here this weekend (Aug 6 and Aug 7) for the Sibu Breastfeeding Support Group Convention at Kingwood Hotel.

Co-chairperson of Sibu Breastfeeding Support Group Convention matron Patimah Duat said the event is in conjunction with World Breastfeeding Week 2022 which falls on Aug 1 until Aug 7.

She said this year’s theme is ‘Step up for Breastfeeding: Educate and Support’. Thus, the convention aims to create awareness of the importance of supporting breastfeeding mothers by the community.

“At the convention, we will hear sharing from a longhouse woman on successful breastfeeding. Then, we will have various workshops.

“Then, we will have a forum to discuss certain issues and then we will put forward our ideas to the authorities so that they can implement something to support mothers,” she said.

This is the first such convention ever held in the state.

“So, we have participation from the government agencies and the private agencies. To make this effort a success, we need cooperation from all parties,” she said.

She said that through the convention, the group aimed at creating an environment conducive for breastfeeding mothers.

“I think everyone knows that breast milk is the best for the babies but some mothers, they cannot even make it exclusive for six months, so we are trying to create an environment where we can help mothers to do better for their babies,” she added.

“I am glad to be part of the team and I am proud that Sibu is able to hold such a big convention for the sake of supporting our mothers,” she added.

Meanwhile, Sibu Hospital director Dr Nanthakumar Thirunavukkarasu said as the nation is going through the endemic phase of Covid-19, breastfeeding issues should not be overlooked.

He said although the Sibu Hospital has been recognised as a breastfeeding hospital, promotion for such environment should also be done outside to encourage breastfeeding among mothers.

“People’s awareness of breastfeeding has already improved, but there are still some people who have misconceptions about breastfeeding.

“We want to improve the habit of breastfeeding. Nevertheless, people are acknowledging the benefits of breast milk, such as the mother’s body will go back to normal size after breastfeeding and then there are lots of nutrients from the breast milk which you cannot get from formula milk,” he said.

He also said that the support from the community has been very good.

He thanked his staff for working hard to make the convention a success.

Previous ArticleM’sian mum asks if Putrajaya views women as ‘worthless’, must punish kids by refusing them citizenship
Next Article Fatimah lauds Putrajaya’s move, pledges to continue S’wak’s own integrated programmes to deal with the homeless