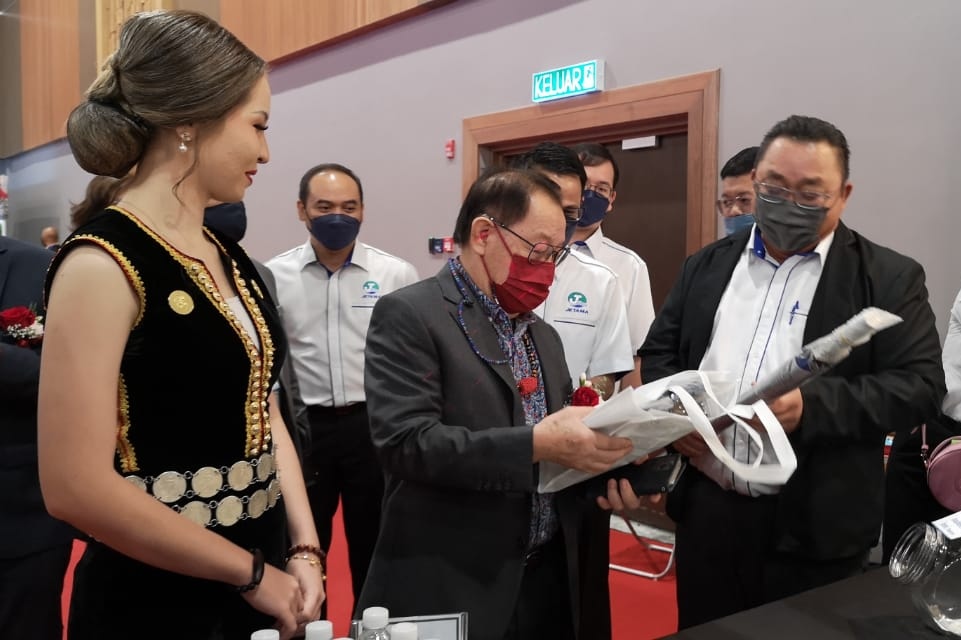 Jeffrey looking at the products at the Livestock, Aquaculture and Agriculture Expo.

KOTA KINABALU (Aug 5): STAR Sabah is supportive for the anti-party hopping law to be applied in Sabah as well.

Its president, Datuk Seri Panglima Dr Jeffrey Kitingan said that the anti-hopping bill has the backing of the party to be applied in Sabah.

“We have supported it at the Federal level also. We will support it,” he said at a press conference on Friday.

Jeffrey who is also Deputy Chief Minister and Agriculture and Fisheries Minister, reminded that when Parti Bersatu Sabah (PBS) was the government, it passed the anti-hopping law in Sabah.

“So, actually the Sabah government can be said to be the firstnone to pass the anti-hopoing law in Sabah,” he said.

However, he claimed that the (federal) government then took the Sabah government to court and alleged that it was unconstitutional.

“That is why, before the anti-hopping law is passed, the Constitution has to be changed first — Article 10 of the Constitution which provides freedom of association is now being amended to accommodate, to give room to the RUU (Bill) Anti-Hop. I think it is a good law and a long time coming,” he added after launching the Sabah Livestock, Aquaculture and Agriculture Expo at the Sabah International Convention Centre on Friday.

“We will support it,” added Jeffrey who has hopped to a few parties since entering politics.
He was first elected as Bingkor assemblyman in 1994 on a PBS ticket but left the party after the 1994 state elections to join newly formed Parti Bersatu Rakyat Sabah (PBRS) only to leave it hours later to join the now defunct Parti Akar.

In the following years, he quit Akar and returned to PBS. He quit PBS again and rejoined PBRS in early 2000.

On 28 July, this year, the amendment to the Federal Constitution to prohibit members of the Dewan Rakyat from switching parties was passed by Parliament.

PBS president Datuk Seri Panglima Dr Maximus Ongkili said on the same day that the passing of the anti-hopping law at Dewan Rakyat does not apply to the Sabah and Sarawak State Legislative Assemblies, hence the need for both states to table the law at their respective state levels.

Dr Maximus explained that a special sitting must be called to pass the law at the state levels in the next 60 days.

The GRS-Barisan Nasional-led state government has said that it would adopt the anti-hopping law but has yet to say when it will hold an assembly sitting to enact the law under its constitution.