Saturday, October 1
You are at:Home»Features»Not something to be done on a whim

New owners must be fully prepared, committed upon deciding to keep reptiles, amphibians as pets 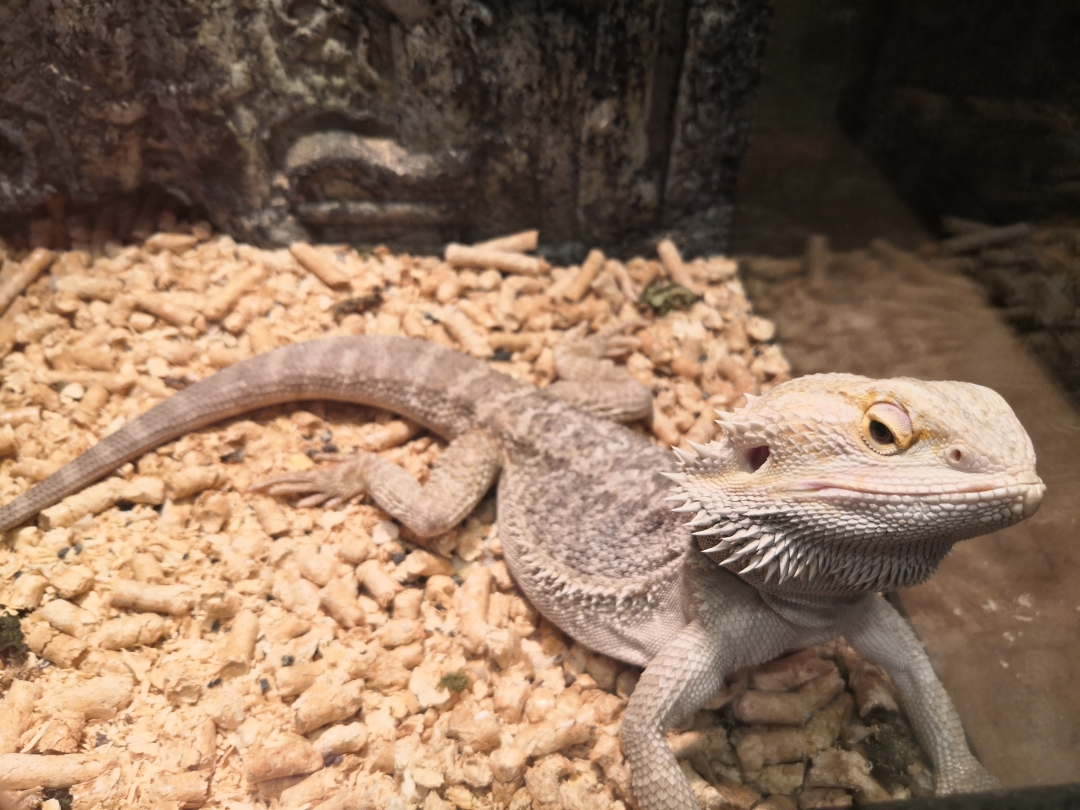 A bearded dragon relaxing in its enclosure.

AS with any type of pets, keeping a reptile or an amphibian requires huge commitment of time, space and resources, and any owner must be willing to do this in the long run as most of these animals, with proper care, can live for more than a decade.

Reptiles and amphibians can actually become ideal pets – they are quieter than the traditional cats and dogs and indeed, less smelly too!

Space-wise, pet reptiles or amphibians require a container, an aquarium or terrarium, or a cage, depending on the types or species. This goes for size as well; depending on what you decide to keep, it can be as small as a typical planting pot or as large as a normal living room.

Either way, it is highly advisable to make it as much like their natural environment as possible and in this respect, ‘furnishing’ the space with plants, vines, driftwood, mosses and rocks would greatly help.

What type to choose?

The first step, however, is to determine which one that will fit your preferences, lifestyle and ‘caretaking’ level.

“As long as a person is keen on keeping a reptile as a pet, that should not be a problem,” Ronald Lau, a staff member of Kho Animals Enterprise, tells thesundaypost.

“But I must remind new pet owners to be really, really well-prepared before making any purchase. They must not buy such an animal on a whim, or just because it looks cute.

“Be sure that you are prepared, and willing, to deal with the feeding and cleaning requirements, as well as on the daily checks.”

According to Lau, one of the most important aspects in this type of pet-keeping is to ensure that they receive enough heat, which can be achieved by fixing heat or basking lamps or those that emit ultraviolet (UV) A or UVB lights.

Having such a light on one side of the enclosure would allow the reptile to replicate its natural regulation of moving into and out of sunlight.

“These lamps need to be kept switched on every day, which could contribute to a spike in your electricity bill. If the bulbs burn out or break, then you need to change them.

Especially for the dessert-originated species, they need consistent heat and on top of that, they also require water enough for drinking and ‘bathing’, but not too much to the extent that it can create a moist atmosphere,” Lau elaborates.

It is different for the tropical forest reptiles, which can usually be found on the jungle floors or treetops. These species enjoy hot and humid climates, and require less sunlight.

“Consistent humidity is a must, in order to make these creatures feel at home. This can be done by placing a water fixture inside the enclosure,” says Lau. 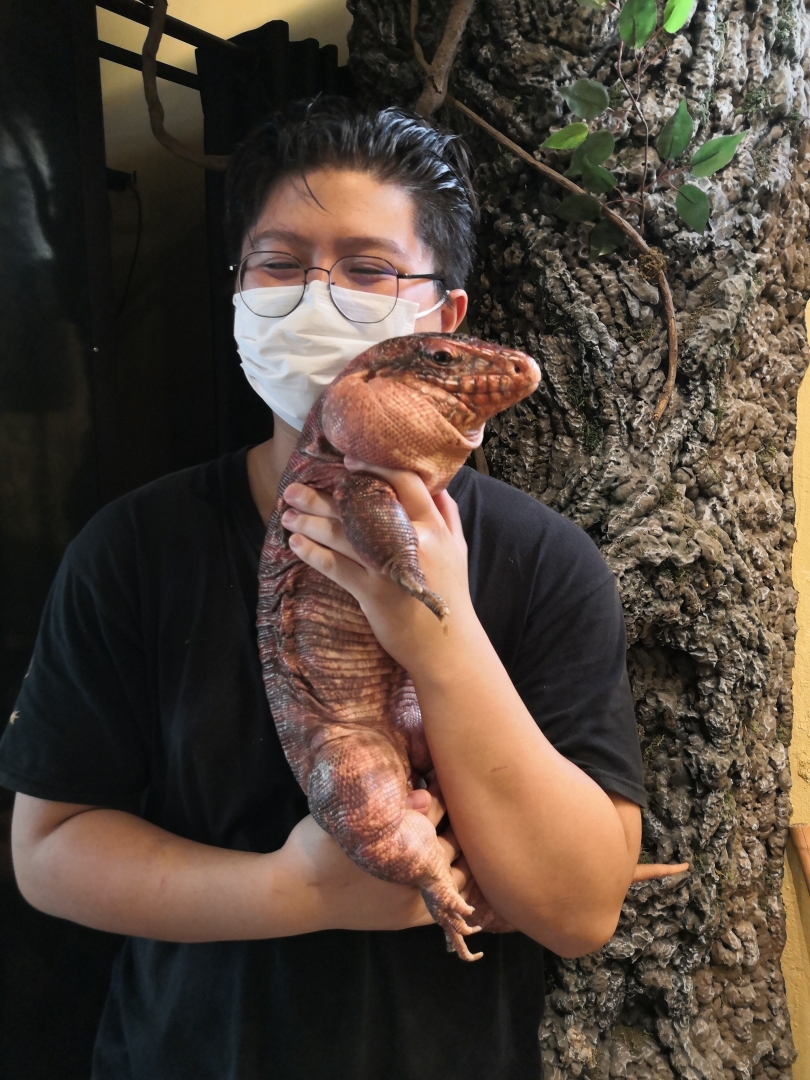 When asked about his recommendation for the beginners, he singles out ‘bearded dragon’ from the rest.

Native to Australia, this lizard species can be welcomed into any home due to its docility and ability to adapt to captivity.

“The bearded dragon is ‘a friendly lizard’, fantastic for beginners. It is among the most popular semi-arboreal reptiles to be kept as a pet,” says Lau.

Arboreal, in zoology, refers to animals living in, on or among trees – different from terrestrial (on the ground); thus, semi-arboreal refers to those often inhabiting and frequenting trees, but not completely arboreal.

On feeding, Lau says the typical diet of a bearded dragon consists of mealworms, crickets and also vegetables such as sweet potato, pepper and leafy greens like kale and parsley.

An adult dragon, according to him, would eat perhaps once a day, far less than a juvenile lizard, which would require between 10 and 20 small meals a day.”

In selecting the enclosure for a bearded dragon, a newbie should highly consider a glass case measuring four feet (1.2m) in length, and 0.6m each in width and height – plus a screen top.

This enclosure should be filled with sand substrate, which must be cleaned once a week to rid of the faeces and all residues from feeding.

“A deep-cleaning of the substrate should be carried out at least once a month to ensure that their living space would remain clean,” adds Lau.

He also reminds the pet-keepers that while cleaning the enclosure, they would need to temporarily place the lizard somewhere that does not have items like dishes or decorations, which it could climb over.

Hot soapy water should do well for washing the enclosure, while using disinfectant is much recommended to eliminate bacteria and other germs. 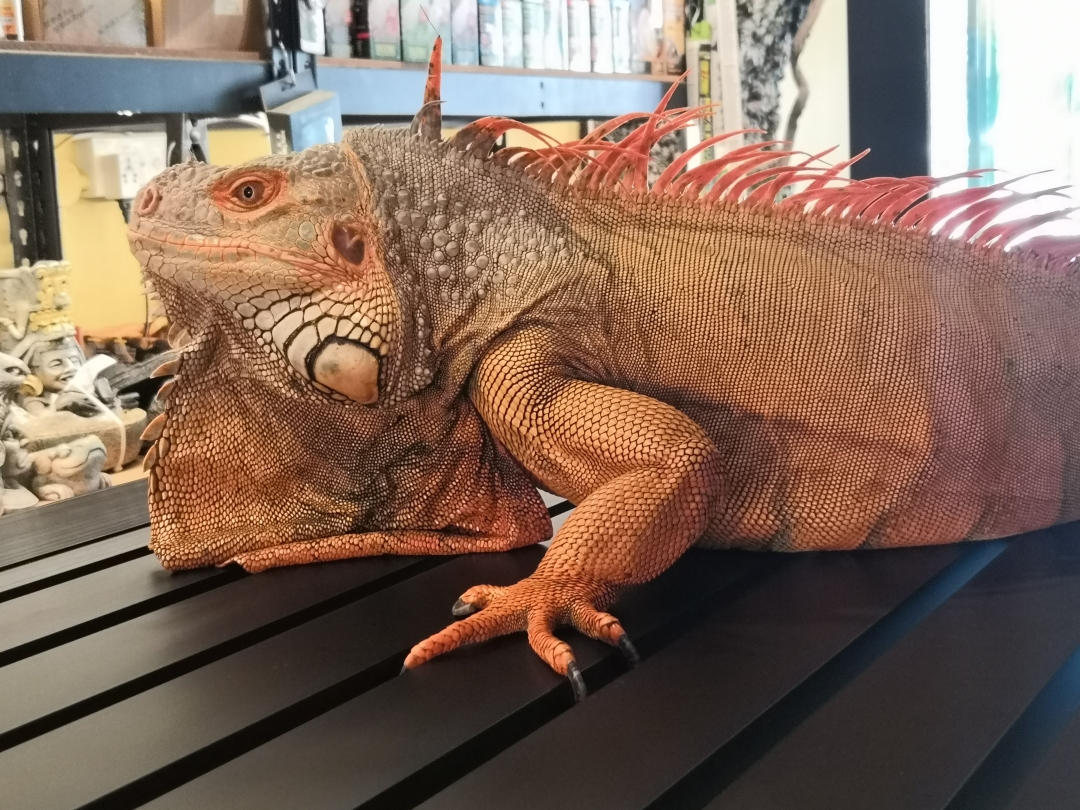 An iguana is a popular choice among exotic pet-keepers.

‘Direct handling only when necessary’

It must also be highlighted that reptiles must not be considered as ‘playthings’, and neither should they be handled like a cat or a dog.

“Reptiles should only be handled only when necessary, such as transferring them into new enclosures, or during physical checks.

“It is also important to not handle them when they are in the process of shedding their skin as this can lead to improper or irregular shedding patterns, known as dysecdysis,” Lau points out.

He also warns that without proper care, many reptiles would be susceptible to serious and painful health problems such as metabolic bone disease (due calcium deficiency), mouth rot, respiratory complications, and even abscesses and ulcers.

“Even the basking lamp, the very thing that helps regulate their surroundings, could cause burns if not monitored closely and frequently. Other common injuries that most reptiles in captivity can sustain are small cuts, scrapes, damage to the skin or scales, and low impact trauma.”

Lau also highlights the importance of recognising the signs of stress in a captive reptile, one of which is it rubbing its ‘nose’ against the glass wall of the enclosure.

“Usually, customers whose pet reptiles experience health problems would approach my boss for advice, as he has been keeping reptiles for more than 13 years,” he adds. 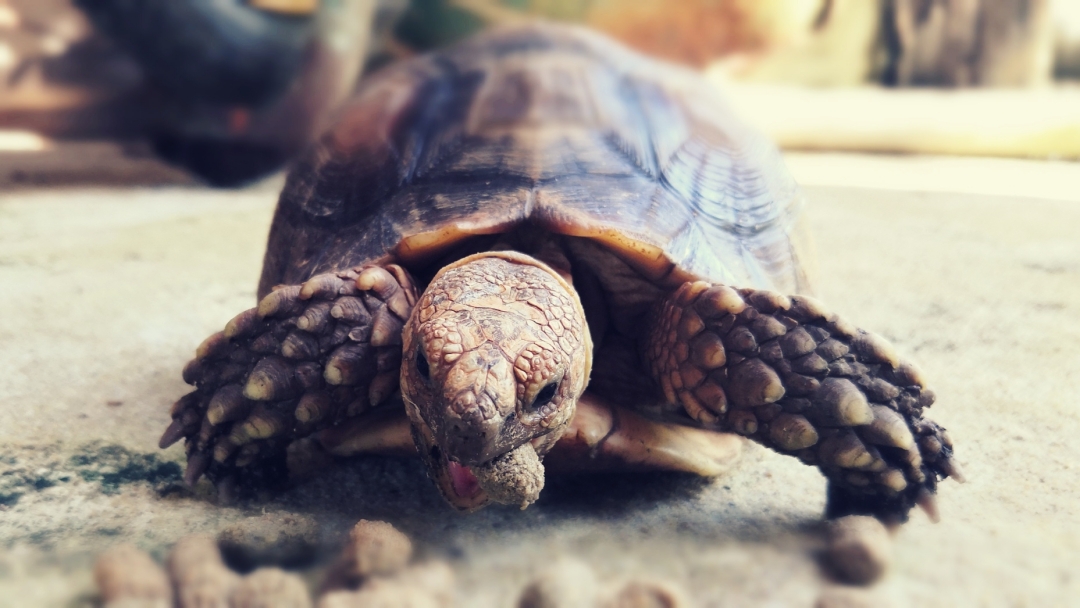 Safety applies to owners too

It is equally important for a pet-keeper to have decently-stocked first-aid kit box available at all times, and among the must-have items are cotton balls, gauze bandage rolls, waterproof adhesive bandages, scissors, antiseptic solution, nail clippers and tweezers, and also medical adhesive tape.

One must also remember reptiles carry germs that can make a person sick.

According to the Centers for Disease Control and Prevention (CDC), the national public health agency of the US, young children, people with weakened immune systems and adults aged 65 and older are at higher risk of getting sick from germs carried by reptiles and amphibians.

Illnesses can be spread by bacteria, fungi, viruses or parasites entering the mouth, and they can also be spread through the air, or by a break in the skin.

One of the most common diseases spread from reptiles to humans is salmonella.

“Although reptiles and amphibians can make interesting and entertaining pets, it’s important to be aware that they sometimes carry germs that can make people sick.

“People can get sick from salmonella bacteria through contact with reptiles, amphibians, or their environments, including water from their tanks or aquariums,” says CDC in the ‘Reptiles and Amphibians’ topic of the ‘Healthy Pets, Healthy People’ section on its website. 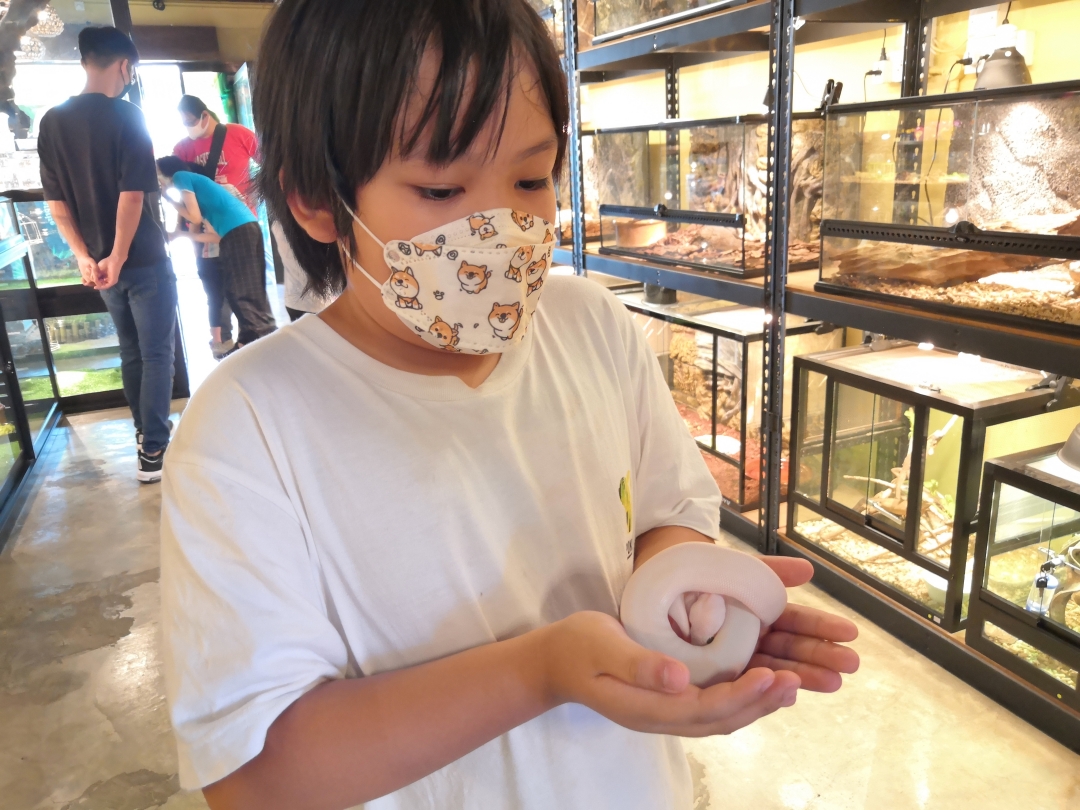 Other illnesses that the reptiles may inadvertently transmit to humans include botulism, campylobacteriosis and leptospirosis; worms and ticks can sometimes be passed from a reptile to a human too.

The most effective way to prevent the spread of illnesses is for the pet owners to always practise proper hygiene.

One must wash the hands thoroughly with soap and water every time after handling a reptile.

“Wash your hands with soap and running water:

“Use hand sanitiser with at least 60 per cent alcohol if soap and water are not readily available. Supervise young children when they use hand sanitizer to prevent them from swallowing alcohol,” advises the CDC.

Many experts also recommend that anyone with children under the age of five in the household, should forgo any intention of keeping reptiles and amphibians as pets. 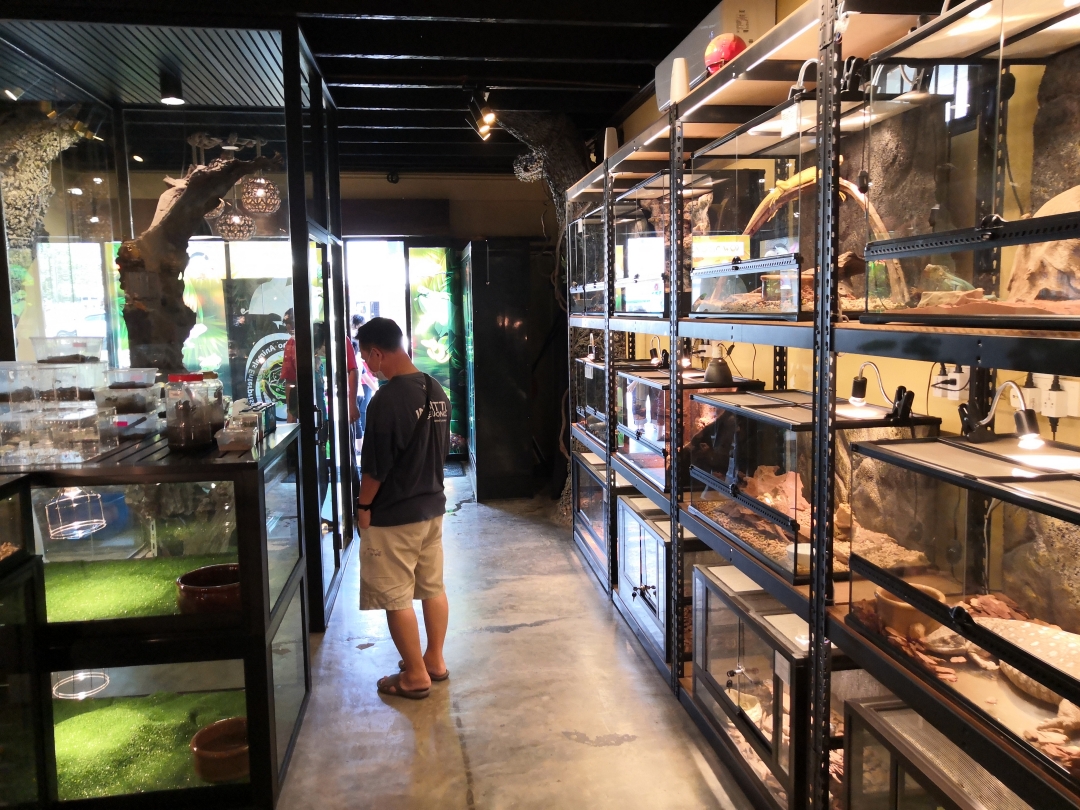 The pet shop has quite a number of reptiles and amphibians on display at its showroom.