Saturday, October 1
You are at:Home»Columns»Commentary»Taking slogans beyond the feel-good sparkle

LIKE a thread knitted, woven, and interlaced into a flawlessly beautiful cloth … to be a prosperous Malaysian family. — Datuk Seri Ismail Sabri Yaakob 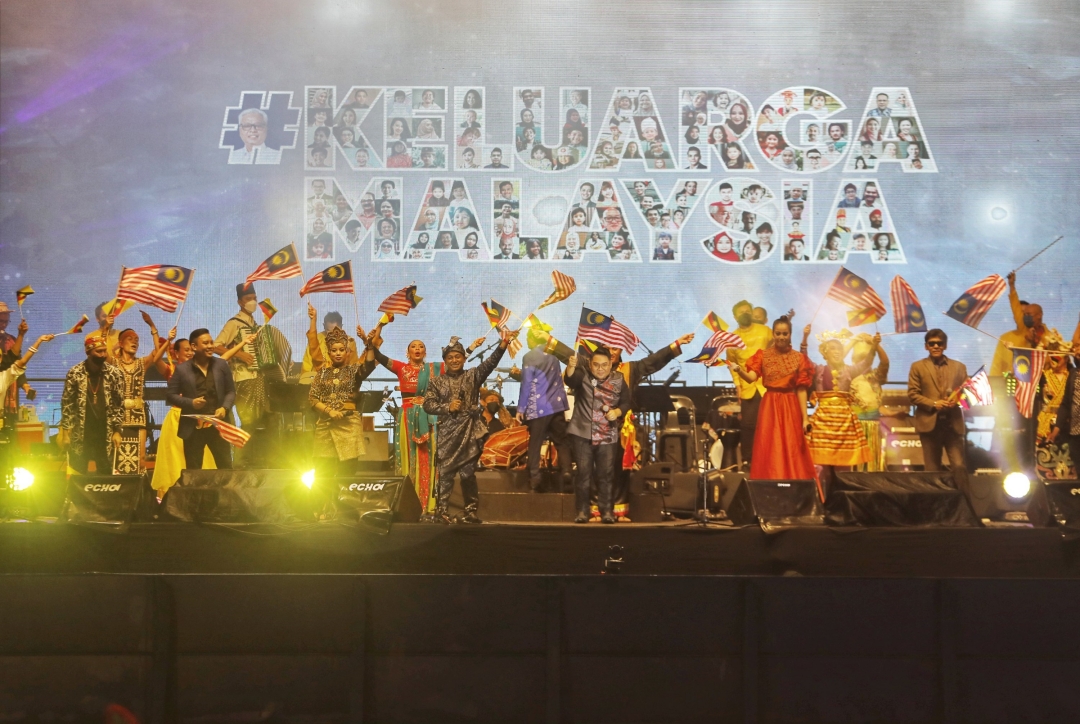 The Keluarga Malaysia slogan forming the centrepiece of the backdrop for the opening ceremony of an event in Kuching earlier this year. – Photo by Chimon Upon

IT arrived and rose to great national acclaim, igniting a wave of hope and expectation and ushering in a new narrative that was on everyone’s lips and hugging the media. But it did not stay long enough to gain traction, let alone earn an indelible place in history. The passage was transitory and its span overtaken by new national initiatives and policy thrusts.

Such was the rise and retreat of some of the slogans of past national initiatives whose goals were noble and which generated widespread support and enthusiasm across the country in their early stages, and the personification in this instance seeks to reveal how it once endeared itself to the people with promotional songs and messages that resonated across generational lines.

Many of what were once popular people-oriented programmes, such as Rakan Muda, Malaysia Boleh, and Satu Malaysia, are hardly seen on the national development radar in recent times, and their songs, too, which made them widely known among the masses are seldom heard on the airwaves.

Regardless, they are remembered as significant milestones on the country’s road to nationhood, and they occasionally appear as reference points in public debate and forums on development and social integration. Rakan Muda and Satu Malaysia are two of these initiatives whose buzzwords have lost their lustre and whose media presence has faded. Have they outlived their usefulness and their time? The question begs another: to what extent have the programmes influenced the general public and achieved the desired social outcomes? Is there any research on the responses? What type of follow-up programme is needed? These are questions that are rarely adequately answered, resulting in misunderstanding and misinformation.

The programmes were essentially government initiatives to broaden and strengthen people’s participation in socioeconomic activities, which comprise the people dimension of the government’s key policy thrusts. That explains why, for the most part, people participation has been subjected to the unilateral top-down approach common in the government delivery system.

In light of this, the people either did not take ownership of the programme or simply were not given the opportunity to be trained to take up responsibility. The policy out of which these initiatives and slogans were born was hailed as people-centric and the policy promulgators commended for stepping out of the safe and familiar territory. A key factor that may have caused the slogans to lose their lustre is a mismatch between policymakers and implementers in terms of consistency of commitment to the cause and understanding of the social behaviour of the target beneficiaries. As a result, the masses gradually detach from the slogans and lose interest in government initiatives that were once widely promoted by the slogans.

The conjecture calls into question the masses’ trust and faith in the programme as a game changer and social definer, despite the fact that the issue is complex and the stakeholders are numerous and diverse, with prejudices and nuances that would be difficult to eradicate.

Slogans come and go. Many emerge as creative products of the day’s political master. However, the winds of politics may shorten their lives. If the person who promoted the innovative idea is replaced by someone from an opposing party, the earlier slogan is likely to be replaced and consigned to the archives. The triviality and theatrics of politics never fail to entertain and amaze!

Why do some government and political slogans catch on while others don’t? A good slogan inspires unity and action, whereas a bad one lands in the face of a leader like spit in the wind.

Scholars and researchers in political communication will tell you that slogans are generally used to motivate and convey mood or opinion in politics and development programmes. In light of this, the concept of representative government includes communication between the people and their government.

The public’s ideas are heard through communication, and the government must use communication to consolidate support for its actions. Slogans serve as a vehicle for the general public to express their views on public issues.

Slogans or catch phrases are about the only medium through which a large number of ordinary citizens can express their personal and repeated support for development or social propositions.

However, on the downside, most of the slogans do not foster in-depth knowledge of public issues and community behavioural pattern. Oversight and limitation of time and resources may not allow such comprehensiveness and at the far receiving end, the unquestioning masses, especially in the rural areas, may not have the critical mind to discern.

Never without a slogan

Malaysia is never without a slogan. As government public relations would dictate, a new slogan would take centre and become the hallmark of the new Prime Minister soon after taking office, leaving the slogans of his predecessors on the outside looking in. ‘Keluarga Malaysia’ arrives, and ‘Satu Malaysia’ bows out, akin to changing of the guards. It’s all about a new label and new brand for a new man in power, based on a chosen policy thrust, and if Shakespeare were to wake up from his eternal slumber and utter with glee “ …. Much ado about nothing,”, I would scringe with glee and comic relief.

Continuity is the loser, as every time a new Prime Minister takes office, a new slogan emerges and all communication and paraphernalia materials bearing the old slogan and logo must be replaced with the new one.

It goes down to the minute detail, including replacing the greeting ‘Salam Satu Malaysia’ with ‘Salam Keluarga Malaysia’. The exercise costs huge amount of money. Although initially perplexing, the variation provides a fun and light-hearted progression to communication linguistics.

Currently, millions of Malaysians are basking in the glow of ‘Keluarga Malaysia’, which generates a new wave of feel-good sparkle. Radio and television stations greet the nation with ‘Salam Keluarga Malaysia’, as do political and government leaders, as more people join the mainstream chorus, while the ‘Salam Satu Malaysia’ greeting fades into the background, with its echo occasionally bouncing when mistakenly mentioned. Such is the life and times of slogans in the country.

The Keluarga Malaysia initiative, which was authored by Prime Minister Datuk Seri Ismail Sabri Yaakob, drew its strength of purpose and direction from the concept of ‘tasamuh’, which emphasises the value of tolerance and togetherness.

According to the charter of ‘Keluarga Malaysia’, the value of tolerance should be emphasised not only in social life but also in religion by respecting religious rights, resulting in a peaceful and prosperous society. This is a difficult task, but the Prime Minister has shown the courage to take it on and, as stated in ‘Keluarga Malaysia’ charter, he was willing to disagree with some of the extremists.

Religious rights and tolerance are two keywords in the ‘Keluarga Malaysia’ charter that are sure to catch your attention and stir your intellect.

It aims to bring together the multi-racial and multi-religious community into one big family through three main thrusts, namely, inclusiveness, togetherness, and gratitude. The concept and approach are simple to understand because they are founded on values that we already share as a family.

In matters pertaining to social tolerance and unity, religion or religious rights have always been a touchy issue.

Previous ArticleSparing a thought for the indigenous peoples of Malaysia
Next Article Fadillah: JAKM S’wak getting good response