Wednesday, December 7
You are at:Home»World»Zelensky condemns Russian ‘terror’ after damage to nuclear plant 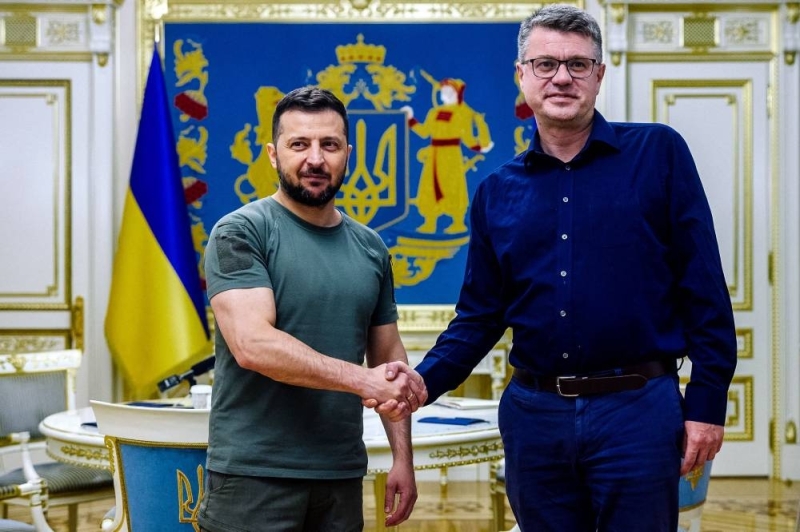 KYIV (July 7): Ukraine President Volodymyr Zelensky on Saturday accused Russia of using the Zaporizhzhia nuclear power plant “for terror” after the operator of the facility reported major damage at the site.

Energoatom, operator of the Zaporizhzhia nuclear power plant in the south of the country, said Saturday that parts of the facility had been “seriously damaged” by military strikes and one of its reactors was forced to shut down.

Friday’s strikes had damaged a station containing nitrogen and oxygen and an auxiliary building, Energoatom said on the Telegram messaging service.

As hostilities raged on in the east and south of Ukraine, pro-Moscow authorities in the Russian-occupied Kherson region reported another assassination attempt on a senior official.

And the head of Amnesty International’s Ukraine office announced she had resigned from the organisation over the group’s publication of a controversial report that accused the country’s military of endangering civilians.

Kyiv and Moscow have blamed each other for the attacks on the Zaporizhzhia plant, Europe’s largest atomic power complex.

Zelensky, in his nightly address on Saturday, once again accused Moscow of terrorism, saying, “Russian terrorists became the first in the world to use the power plant… for terror.”

The European Union’s top diplomat Josep Borrell condemned the attack “as a serious and irresponsible breach of nuclear safety rules and another example of Russia’s disregard for international norms”.

An official with the Russian occupying authorities in Kherson was gravely wounded Saturday in an attempted assassination, local Moscow-backed officials said.

Vitaly Gur “is in hospital with multiple gunshot wounds, in a critical state”, an unnamed official told Russian state news agency TASS. Gur is the deputy chief of the Kakhovka district, some 80 kilometres east of Kherson city.

This was the latest in a series of reported assassination attempts against officials in Ukrainian regions controlled by Russia.

Although Russia has seized a large swath of the Kherson region and part of nearby Zaporizhzhia in recent months, Ukraine’s forces have reclaimed some territory.

In his address Saturday, Zelensky hit out at Amnesty International, comparing the rights group’s accusations against Ukraine’s military with its silence on Russia’s actions.

Referring to the strikes on the Zaporizhzhia plant, he said that although they represented “one of the most dangerous crimes against Ukrainians and all Europeans… for some reason, there’s still no report or even just a simple message from Amnesty International about it.

“It’s a very eloquent silence, which points out, once more, a manipulative selectivity of this organisation,” he added.

Amnesty sparked outrage in Ukraine with the report published Thursday that accused the military of endangering civilians by establishing bases in schools and hospitals, and launching counterattacks from heavily populated areas.

The head of Amnesty’s Ukraine office quit the organisation in protest.

“If you don’t live in a country invaded by occupiers who are tearing it to pieces, you probably don’t understand what it’s like to condemn an army of defenders,” Oksana Pokalchuk said on social media late Friday.

“And there are no words in any language that can convey this to someone who has not experienced this pain.”

Pokalchuk said she had tried to warn Amnesty’s senior leadership that the report was one-sided and failed to properly take into account the Ukrainian position but had been ignored.

Amnesty Secretary General Agnes Callamard expressed regret at her departure and paid tribute to her work. But the organisation stands by its report.

On Friday, Ukrainian officials said three grain ships left Ukraine after the first in months sailed on Monday as part of a deal to avert widespread food shortages.

Another five cargo ships are due to leave the Ukrainian ports of Odessa and Chernomorsk on Sunday, said a statement from the Joint Coordination Centre of the Black Sea Grain Initiative — the organisation coordinating the operation agreed between Russia, Turkey, Ukraine and the United Nations. — AFP