Tuesday, February 7
You are at:Home»Features»Finding coexistence with endangered Bornean elephants
For the freshest news, join The Borneo Post's Telegram Channel and The Borneo Post on Newswav. 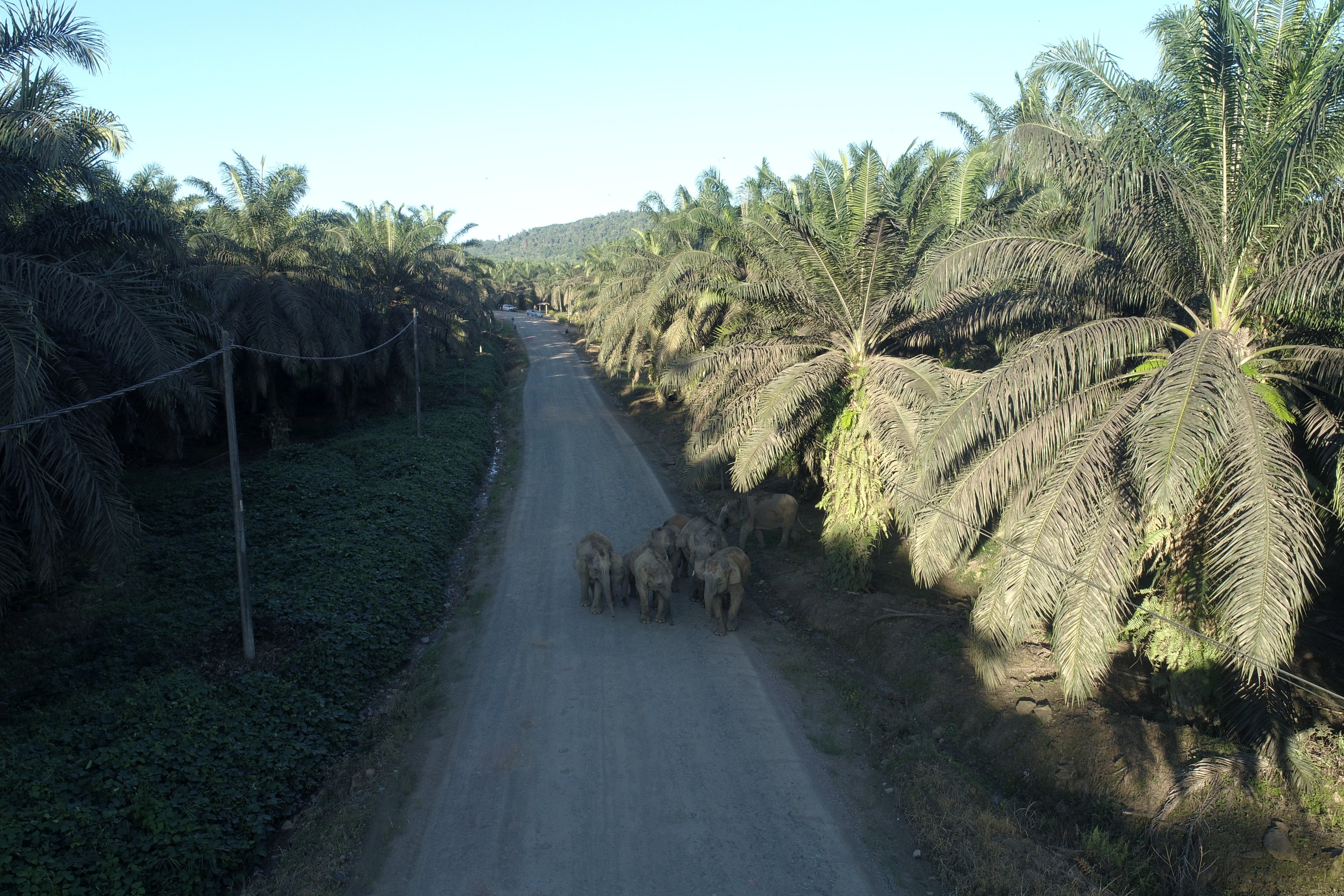 A herd of Bornean elephants traveling along an oil palm plantation. — Photo by Mazidi Abd Ghani/WWF-Malaysia

KOTA KINABALU (Aug 12): It started out like any ordinary day. Having completed his work at a nearby forest reserve, 38-year-old research assistant Frederick Kusam was making his way home. His work as an elephant conservation research assistant for the Sabah Landscapes Programme at WWF-Malaysia meant that he spent long hours in forest reserves and equally long hours to and from his forest workplaces.

This day was no different. Frederick was two hours in on his journey on the Maliau-Kalabakan road when he stopped by the side of the road for much needed rest. As he stretched his legs outside his car, something large caught his eye. There, not far from where he was standing, an elephant so magnificent in size came out of the adjacent forest and crossed the road only to disappear into the forest again.

But before Frederick could breathe a sigh of relief, the elephant returned to the road and to his horror, it began making its way towards the car.

The scenario that Frederick was facing is not an uncommon one in parts of Sabah. Bornean elephants inhabit the forests of Sabah with a small population in northern Kalimantan. They are the smallest subspecies of elephants in the world. However, as the smallest elephants, they are still large in stature – standing between an average of seven and eight feet tall.

Bornean elephants are continuously faced with numerous threats to their existence. Every day, they face threats arising from human-elephant conflict and poachers whose snares intended for smaller animals trap the elephants instead. Elephants are also threatened by a loss of habitat where areas that they utilise — typically referred to as elephant ranges — are converted into agriculture plantations, settlements, and roads.

Elephants are a social species and are known to travel in groups called herds. They move in search of food and shelter. The routes that they take are knowledge and experience that are passed down from generation to generation. Even when those routes convert from their habitat into our roads, elephants will still journey through.

For the road users in parts of Sabah, the sight of elephants crossing is not new. Elephants are known to forage along roads where grasses grow abundantly. Like Frederick, many who frequent the Sapulut-Maliau-Kalabakan road would have had a chance encounter with elephants. It is on roads such as these that the needs of humans and that of elephants intersect. For us humans, roads give us access to our homes. It gives us access to our work and thus contribute to our livelihoods. But more than this, roads also provide access to healthcare facilities. It is crucial for the transport of commodities and thus contribute to economic growth and trade. For the elephants, the same road is a remembered path that gives them access to food and larger foraging grounds.

It is on roads such as these where humans and elephants encounter each other that humans can be empowered to ensure that this encounter is one of co-existence and not of conflict. When Frederick saw that the elephant was heading towards him and his car, he didn’t panic. Instead he moved backwards slowly. The elephant eventually stopped and made its way into the forest.

Startled and perhaps sensing danger in the situation, maternal instincts kicked in and the adult female elephants started to mock charge towards the individuals. While the elephants stopped charging and the individuals made it to the safety of their cars, the situation could have gone horribly wrong. The encounter could have ended in tragedy and another statistic of human-elephant conflict would have been recorded.

Under the Sabah Landscapes Programme, elephant conservation efforts are underway to safeguard the Bornean elephant population and promote human-elephant co-existence. SLP, through its three pillars – Protect, Produce and Restore – conducts elephant satellite collaring to identify the Bornean elephant’s key space requirements which in turn will be used to reduce future conflicts. Additionally, SLP works to restore ecological corridors to connect fragmented habitats to facilitate the movement of wildlife like the elephant. These corridors are also crucial to increase gene flow to reduce the negative effects of inbreeding as well as to provide connectivity to areas of higher elevation in the event of climate change.

Together with the Sabah government, private corporations and other NGOs in Sabah, SLP will continue to play their role in the conservation of Bornean elephants.

There are less than 1,500 Bornean elephants left in the wild. As the Sabah government, NGOs, and corporations do their part to continue securing the future of the Bornean elephants, so too should individuals play their role. Individuals encountering elephants in the wild have both a privilege and a responsibility — a privilege to come across the largest land mammal in its natural habitat and a responsibility to allow these majestic creatures a safe space to inhabit.

Let this World Elephant Day be a reminder that we can do something to safeguard our iconic species. Let us be empowered to take action to protect our largest land mammals.

1.       Stop your vehicle and give way to the passing elephants.

2.      Don’t attempt to get down from the vehicle to take close-up photos of the elephants.

3.      Maintain a safe distance of at least 50m between yourself and the elephants at all times.

4.      Don’t panic when encountering an elephant. Keep calm and wait until they have passed.

5.      Don’t feed the elephants. They will come to associate people with food and may approach vehicles more frequently in the future.

6.      Don’t honk at the elephants. Loud sounds may startle or agitate them.

7.      Dim your car lights if you happen to encounter the elephants on the road at night.