Saturday, October 1
You are at:Home»Features»Empowered by faith to empower others 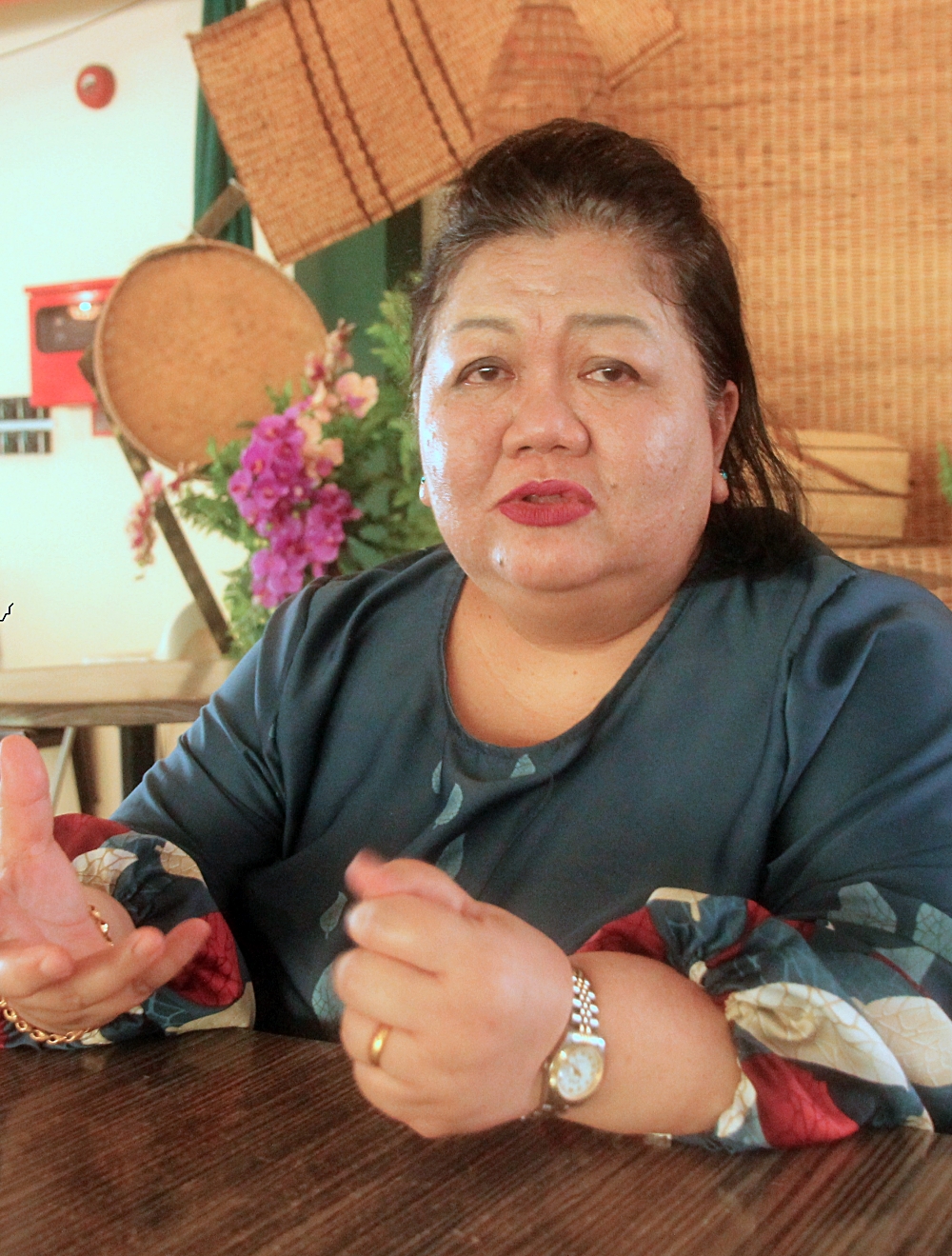 Theresa says there are issues women have to tackle that only women can understand.

CONSISTENCY in commitment to her faith and hope has shaped Theresa Dunstan Udam’s path and ushered her to higher and more meaningful levels of achievement. It has been both a driving and a knitting force in her life. God is at the centre of her life.

She has achieved her ambition of becoming a lawyer, survived two bad car accidents, worked for a number of law firms, and now she runs her own with her partner Wendy Jorai, who is also a competent woman lawyer.

With that and more, Theresa cannot help but live a life of gratitude, which is reflected in her active participation in community service and her benevolence as a filial child.

“In whatever I do, I must put God first. That’s of utmost importance in my daily life. Without God, I go nowhere. That is why when I work, I must work with full integrity and be consistently reliable. When we put God first in our life, we will give our best in whatever we do,” she says, sharing her life’s philosophy with a gentle disposition.

Theresa, the daughter of a police officer, dreamed of becoming a lawyer when she was in her early teens and attending St Teresa’s Secondary School. She recalls going to school at dawn and how her father had to make two trips to send her and her siblings on his motorcycle, each trip with two children on the pillion.

“My dad’s salary was meagre. So he had to make two long trips to get all of us to school.

“Taking the school bus to and fro would mean more money spent and so, we only used the bus to go back. While food was sufficient, money was difficult. I remember we used to pass by a big house on the way to school and how I would imagine myself living in a house like that. It was then I started dreaming of becoming a lawyer. I wanted to change my lifestyle.

“There were children of the ‘rich and famous’ going to the same school whose ‘good life’ further inspired me to study hard. It was my father who helped me to see things from this perspective at a very young age. He stressed a lot on education since I was little. He did not have much formal education, but he instilled the value of education in his children and was strict when it came to studies.

“I remember how my late mom used to complain about her daughters not knowing how to help in the kitchen and my dad would say: ‘Don’t disturb them… let them study’.

In the end, she and all her siblings excelled in their academic pursuit, with her youngest sister following in her footsteps as a lawyer. What her father did in instilling in his children the true values of education did not come without sacrifices. He went the extra mile in order for his children to have good formal education and his strivings were not in vain.

The branch is the only all-women branch in the entire state. While all of the other branches are led by men, Theresa is the only woman who leads a branch in the Dayak Bidayuh association. In all this, her father, now in his late 70s, has been her strong supporter.

“God has been gracious to me and in turn, I must give back to the community and do whatever I can to make a difference in the lives of others,” says the mother of two. 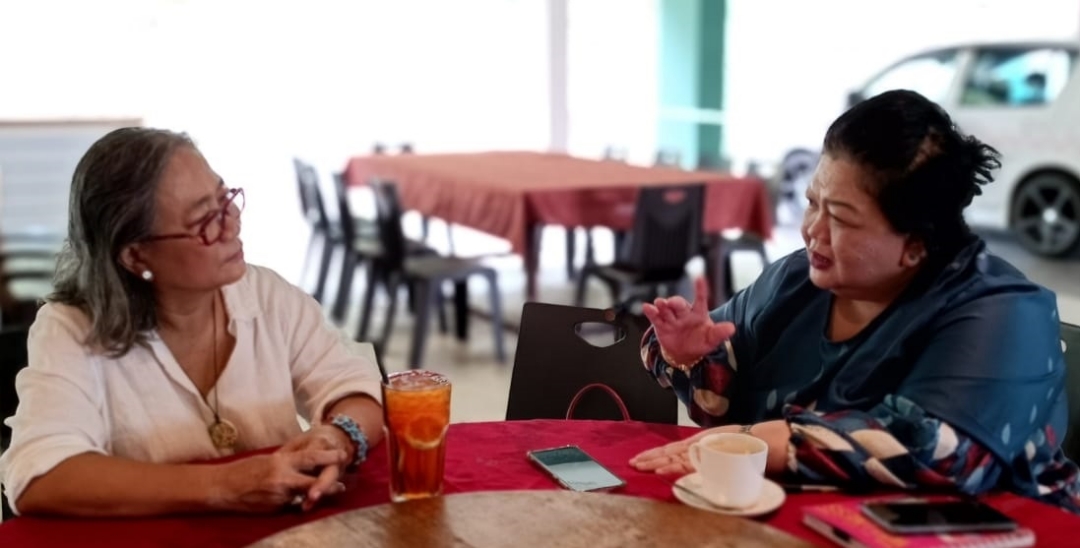 Theresa (right) stressing a point to the writer.

Even when she was still deputy chairwoman of DBNA Women, she had been actively involved in organising awareness programmes for Bidayuh women. True to her principles, she is committed to giving her best even during her troubled times.

It was in November 2017 while she was running a programme on sexual awareness in a Bidayuh area in Serian with the DBNA Women, when her late mother was admitted to the intensive care unit (ICU) of a private hospital. Her mother had a ruptured brain aneurysm and was in a critical condition.

It was a tough time for Theresa, which she was able to overcome. Apart from being the main organiser of the programme, she and also her husband (currently the Registrar of High Court of Sabah and Sarawak) were among the speakers for the programme. The rates of rape and unwanted pregnancy were high in the area at the time and the programme was indispensable.

Proving again her consistent reliability both in family matters and community service, she shuttled from the hospital to the district (which was a 45-minute drive) back and forth. She would not upset the team spirit from both sides, the family unit and the organising committee of the programme, as she gathered her strength to carry on.

Her mother breathed her last after two weeks in the ICU.

“We had done our best, and God loved her more. I’m thankful that my siblings and I could afford to send our mother to a private hospital. Again, I saw the importance of education and how it changed our lifestyle,” she affirms with teary eyes.

As a lawyer, her scope is wide. Having practised in different legal firms for many years, she is not only involved in civil cases but also criminal. In her capacity as chairwoman of DBNA Women, Theresa has organised a number of scams awareness activities, collaborating closely with the Women and Family Department in view of the fact that most scamming victims are women.

She is yet to do a programme concerning drugs and common house gambling – issues that she sees as requiring urgent attention in the Bidayuh community.

Her heart especially goes out to single mothers who are divorced, or whose husbands have left them with their children.

“They go through tough times and yet, they are hardworking and successful entrepreneurs. They move up on their own from zero and are successful in giving their children good education.

“Most of the single mothers do not know how to go about getting funds or grants. Apart from organising programmes, we go to the ground to assist them. During our questions and answers sessions, they bring up issues on legal matters especially those related to divorce,” she explains.

“There are issues women have to tackle that only women can understand. A female will prefer a female lawyer for that matter.

“For this reason, I prefer to supervise female chambering students. Apart from giving them practical training, I have the chance to encourage them to give back to society, particularly in helping the fairer sex.

“Chambering is a learning process where law graduates wishing to practise are required to undergo practical training under the supervision of a senior lawyer. I’m always happy to impart my experience and knowledge to a chambering student.” 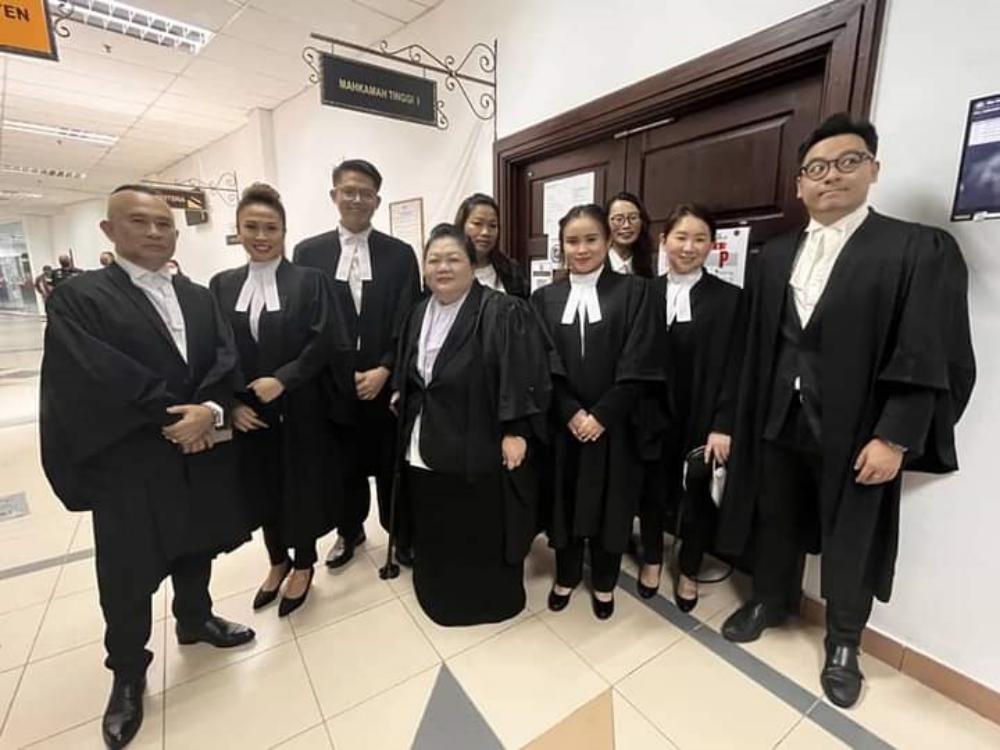 Theresa (centre) with fellow lawyers and their chambering pupils during the pupils’ admission to the Sarawak Bar at Kuching High Court.

In a male-dominated society, there is no stopping a woman from empowering other women.

Theresa sees hope by extending her sense of responsibility to her community and having a heart for women, even though she is working from a male-dominated platform. Despite their low representation in politics, she sees hope for Bidayuh women.

“Indeed, I want to see Bidayuh women recognised in politics, or even to stand as election candidates. It doesn’t matter what party they belong to. No doubt it’s a male-dominated territory, but we have to do our part and take responsibility even if it means we have to work harder than the males to get to the same position.

“We can be an agent of change and not look at the pattern of our lives passively.

“There’re many educated and capable Bidayuh women. I want to encourage them, especially the younger generation to come out, join the DBNA Women’s branch or a political party. We have to start from somewhere in order to have a good networking and explore possibilities.”

Having struggled and braved many challenges in the early years, Theresa has gained sufficient experience, wisdom and strength of purpose to move up the learning curve and relate to the wider expanse of service to her community with humility.

Theresa, whose life has been primarily focused on the ‘I’ of her self-being, has been able to embrace the expanded ‘we’ personality in which, the community around her is just as important as she is.

And like her father, who went above and beyond to ensure his children received a good education, she will continue to give back to the community for as long as she is able.

Previous ArticleTengku Zafrul: ‘Undi18’ platform offers fresh take on politics
Next Article Back to nature – fieldwork in Biology and Geography