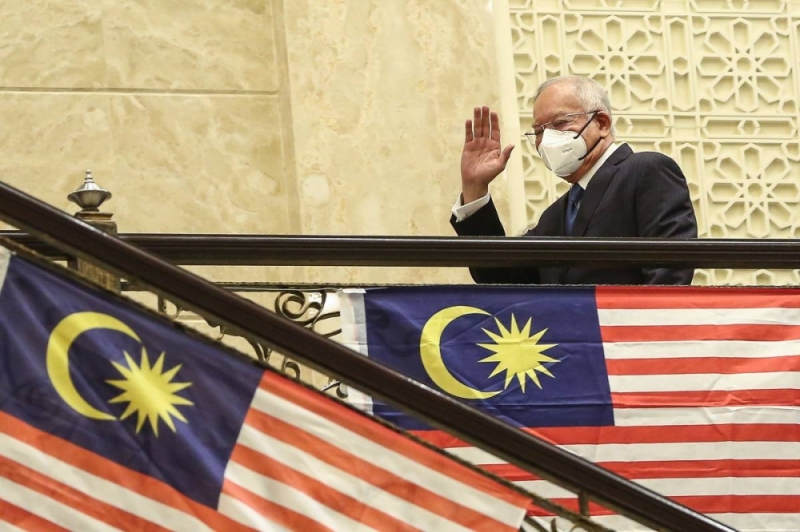 PUTRAJAYA (Aug 15): The new team of lawyers representing Datuk Seri Najib Razak today sought to convince a five-judge panel in the Federal Court to present additional evidence in his final SRC International Sdn Bhd appeal in an attempt to void the trial that saw him convicted and sentenced to 12 years’ jail and fined RM210 million.

At the start of hearing this morning before the panel chaired by Chief Justice Tun Tengku Maimun Tuan Mat, lead counsel Hisyam Teh Poh Teik argued that Najib has fulfilled the four conditions required to admit new evidence at the appellate stage and cited the common law principle as laid down in another lawsuit known as Regina v. Park.

Hisyam said the four conditions can be summarised as evidence that was not available during the trial, relevant to the issues, credible evidence well capable of belief, and reasonable doubt as to the guilt of the appellant.

To back his argument on the first condition, Hisyam claimed that documentary evidence involving Maybank’s formal engagement as strategic advisor to 1Malaysia Development Berhad (1MDB) was not supplied to the defence during the trial.

The lawyer also claimed that this piece of evidence included recent discovery that the SRC International trial judge Datuk Mohd Nazlan Mohd Ghazali was previously the general counsel and company secretary for Maybank Group between 2006 and 2015, and had overall responsibility for the management and administration of all legal departments within the entire group.

Hisyam said Mohd Nazlan has been a long-term employee of the bank and that the latter’s previous conduct before becoming a judge may give a reasonable person grounds to believe that judicial decisions in the SRC International case may not be objective.

“The applicant was unaware of the learned trial judge’s knowledge and involvement in the establishment of SRC and the loans extended to Putra Perdana Development Sdn Bhd and 1MDB during his employment with Maybank,” Hisyam said.

As for the second condition, Hisyam argued that Najib’s defence team had established the relevance of the evidence to be presented as Mohd Nazlan could have become a potential witness in the trial itself, which would disqualify him from presiding as the judge.

Hisyam also argued that the documentary evidence sought to be adduced has not been denied by the respondent on the basis of its genuineness or chain of custody. The lawyer also said the new evidence will serve to create reasonable doubt as to his client’s guilt since it would establish the trial judge’s conflict of interest, and would require Najib undergo a retrial.

“The new evidence is necessary so that there will not be a miscarriage of justice,” Hisyam said.

Najib’s first counsel Tan Sri Muhammad Shafee Abdullah previously claimed on June 7 that Mohd Nazlan had failed to disclose his position in Maybank Group, which was responsible for proposing the establishment of SRC International.

In his supporting affidavit, Najib said the evidence he sought to adduce was not made available to him at trial, adding that the evidence were relevant to the issues before the High Court and Court of Appeal and thus would be relevant to his appeals that would be adjudicated in the Federal Court.

Najib in his affidavit said the fact that Mohd Nazlan knew of his personal involvement in the setting up of SRC International but concealed it to the defence amounts to a conflict of interest that has led to a real danger of bias.

Last December, the Court of Appeal upheld the High Court’s July 2020 verdict and sentence of 12 years in prison and a fine of RM210 million.

The case is now at the Federal Court and it is Najib’s last chance to convince the judges his conviction and punishment should be overturned.

Hearing in the country’s supreme court is scheduled to take place over nine days from today till August 19 and resume after the weekend on August 23 until August 26. – Malay Mail