Wednesday, December 7
You are at:Home»World»US congressional delegation arrives in Taiwan on heels of Pelosi visit 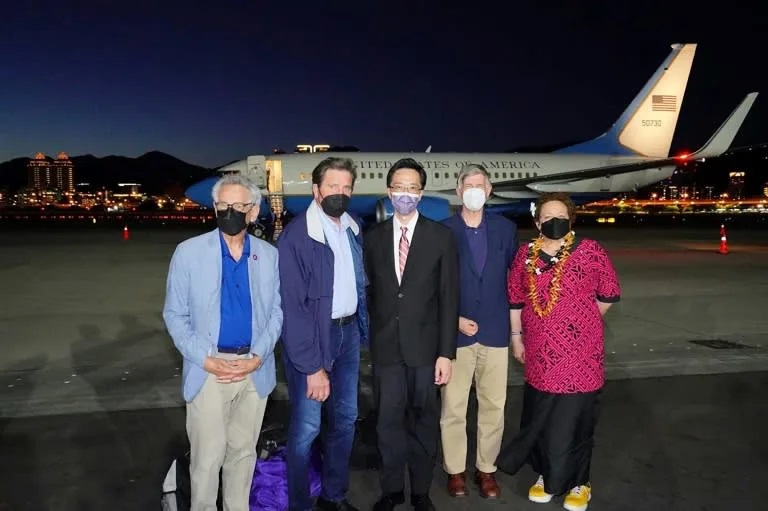 The five-member delegation, led by Senator Ed Markey of Massachusetts, will meet with President Tsai Ing-wen and attend a banquet hosted by Foreign Minister Joseph Wu during the visit, according to Taiwan’s foreign ministry. – AFP photo

TAIPEI (Aug 15): A US congressional delegation arrived in Taiwan on Sunday, officials said, days after China held military drills around the island in retaliation for US House Speaker Nancy Pelosi’s visit.

The five-member delegation, led by Senator Ed Markey of Massachusetts, will meet with President Tsai Ing-wen and attend a banquet hosted by Foreign Minister Joseph Wu during the visit, according to Taiwan’s foreign ministry.

They will discuss “US-Taiwan relations, regional security, trade and investment, global supply chains, climate change, and other significant issues of mutual interest”, the American Institute in Taiwan said in a statement.

Taiwan hailed the delegation’s visit as another sign of warm ties between Taipei and Washington.

“The Ministry of Foreign Affairs expresses its sincere welcome (to the delegation),” the ministry said in a statement Sunday.

“As China is continuing to escalate tensions in the region, the US Congress has again organized a heavyweight delegation to visit Taiwan, showing a friendship that is not afraid of China’s threats and intimidation, and highlighting the US’ strong support towards Taiwan.”

The other members of the delegation are Democratic members John Garamendi and Alan Lowenthal of California, Don Beyer of Virginia and Republic representative Aumua Amata Coleman Radewagen from American Samoa, according to the institute.

China views Taiwan as its own territory to be taken one day, by force if necessary. For a week after Pelosi’s visit, it sent warships, missiles and jets into the waters and skies around the island.

Beijing has raged about the trip by Pelosi, who was the highest-ranking elected American official to visit Taiwan in decades.

Taiwan has accused China of using her visit as an excuse to kickstart drills that would allow it to rehearse for an invasion.

It held its own exercises simulating defence against a Chinese invasion of its main island. China drew down its drills but said it would continue to patrol the Taiwan Strait.

In its daily update, Taiwan’s defence ministry said Sunday that it had detected 22 Chinese planes and six ships operating around the Taiwan Strait.

Of those, 11 planes crossed the median line — an unofficial demarcation between Taiwan and China that Beijing does not recognise.

China earlier this week vowed zero tolerance for “separatist activities” in Taiwan and reaffirmed its threat that it would take control of the self-ruled island by force if provoked.

“We are ready to create vast space for peaceful reunification, but we will leave no room for separatist activities in any form,” China’s Taiwan Affairs Office said in a white paper Wednesday.

China will “not renounce the use of force, and we reserve the option of taking all necessary measures”.

It added, however: “We will only be forced to take drastic measures to respond to the provocation of separatist elements or external forces should they ever cross our red lines.”