Sunday, October 2
You are at:Home»News»Sabah»Don’t prevent branches from being active – Bung Moktar 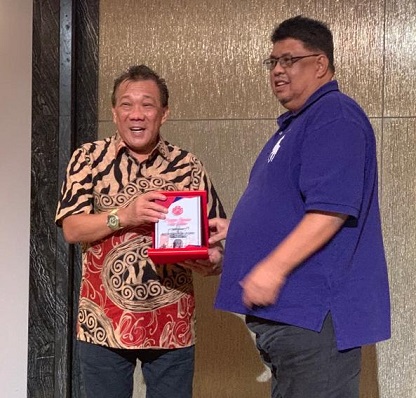 Abd Rauf (right) presenting Bung Moktar with a token of appreciation after he officiated the program.

KOTA KINABALU (Aug 16): Umno leaders at all levels are reminded not to prevent any of the party’s branches from being active and this included preventing the young as well as professionals from joining Umno.

Umno supreme council member Datuk Seri Panglima Bung Moktar Radin in saying this, claimed that there have been instances where several divisions had allegedly done that including to prevent party branches from holding meetings and organising activities just because they were in conflict with the division’s leadership.

“This has happened in several divisions because the branch leaders did not support the leadership of the divisional leaders, causing the branches to be sidelined and unable to hold branch meetings. They were blocked simply because the divisional leaders wanted to strengthen their position,” he said when officiating the Umno Melaka retreat program at a leading hotel here on Monday night.

Bung Moktar who is also Umno Sabah liaison chief, opined that the act of blocking branches is not a healthy democratic practice in the party which can affect the strength of the party.

“Thankfully in Sabah, I have not received a report of a case like this, however if there is, decisive action will be taken including suspending those concerned,” he stressed.

Bung Moktar also said that Umno leaders need to change the perception and give priority to strengthening the party for the sake of the country.

He further reminded Umno leaders not to use the threat of position in the party as an excuse to block branches and young professionals from joining the party because it will harm Umno itself.

According to him, if the leadership at the division and branch level always work hard to carry out the party’s work, they will not have to worry about losing their positions because the members will continue to support them.

Commenting on the Umno Melaka’s retreat program, Bung Moktar hoped that it is able to provide a new source of inspiration for the participants to strengthen the party.

“We have restored the dignity of Umno with a great victory during the Melaka state election and the solidarity of this struggle needs to be further enhanced. I hope by choosing Sabah as the venue of this program will give new ideas to the Umno Melaka leaders, because Sabah Umno has a history of overcoming struggles.

“After the 14th General Election many leaders left the party but because there are still Umno leaders who are steadfast in their principles of struggle, Umno Sabah rose again after the Kimanis by-election and the 16th state election,” he stressed.

Previous ArticleDewan Negara passes five bills
Next Article Khairy: A healthy lifestyle is ideal, but remains a challenge for most Malaysians