Photo shows the severely worn-out wooden floorboards at the resthouse in Long Seridan, which is temporarily housing the clinic.

MIRI (Aug 17): A number of local elected representatives call upon the federal government to allocate more funds for the Ministry of Health (MoH) to build new clinics and also to upgrade the existing health facilities in the rural areas of Sarawak.

In this respect, they fully support the call made by Health Minister Khairy Jamaluddin for bigger allocation to the MoH under Budget 2023.

Deputy Minister in Sarawak Premier’s Department (Labour, Immigration and Project Monitoring) Dato Gerawat Gala believes that the rural folks feel ‘neglected’ and assume that the federal government does not fully understand the challenges and difficulties affecting the rural clinics in Sarawak.

He cites the clinic at Long Seridan as an example highlighting this concern.

The facility was destroyed in a fire about four years ago, but had yet to be rebuilt, leaving the local community no choice but to rely on a temporary facility, which is an old, dilapidated Penan Resthouse next door that had been converted for such purpose.

“This has prompted the Sarawak government to request for a certain degree of autonomy in health and medical matters, to better plan for such requirements.

“In the case of the clinic in Long Seridan, until today nothing has been done by the ministry.

“The old Penan Resthouse continues to serve as a temporary clinic, which is not very conducive to both the staff and the patients – the space in the building is small, it is always congested, and is in a very poor state,” Gerawat, who is Mulu assemblyman, told The Borneo Post here.

Moreover, he said he had to fork up RM70,000 from his Minor Rural Project (MRP) grant to purchase the basic ultrasound scanning equipment for the Long Jekitan Clinic, adding that the rural community had even allocated a piece of land for the facility.

According to Gerawat, who is a Kelabit from Bario, many rural clinics in Sarawak need urgent repair works on their premises and also staff quarters.

“Some of these clinics need resident doctors and senior nurses, as well as the necessary medical equipment.

“Mulu National Park is an international tourist destination, but the health clinic there is too small and poorly equipped to cope with the demands for medical treatments and even emergency cases.

“Although there is a resident doctor here, the clinic does not even a basic scanner,” said Gerawat, adding that he had used his MRP funds to cover the repair works on the generator set powering the clinic up and later on, to purchase a new unit.

Sharing the same sentiments, Telang Usan assemblyman Dennis Ngau highlighted the need for Long Luteng and Long Aton, among the several remote pockets in his constituency, to have their own clinics.

It is informed that the clinic nearest to these areas is the one at Long Bedian. 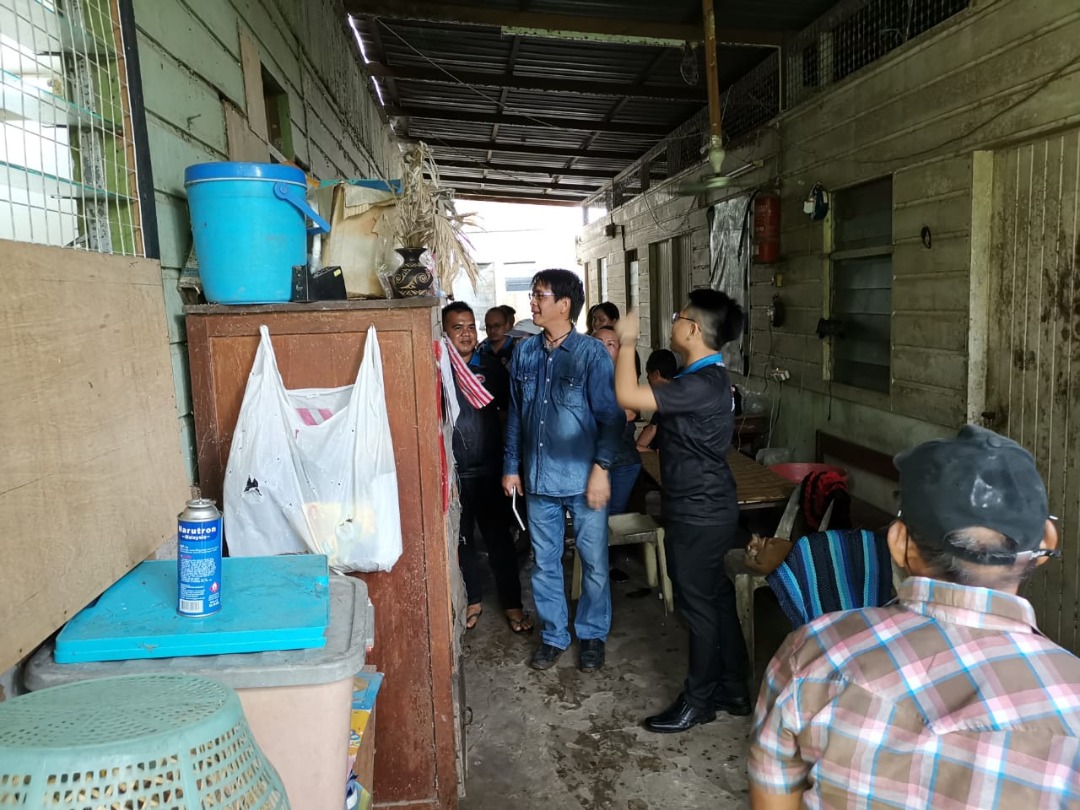 Dennis (front, second right) seen during one of his visits to the run-down Long San Clinic in Telang Usan.

“Some settlements are so far away (from the nearest clinic), and even if transport is available, many just cannot afford to bear the transportation cost – forcing many to just bear the illnesses in their ‘kampung’ (villages),” said Dennis, who is a Kayan from Long Bedian.

The assemblyman regarded the federal government’s minimum population benchmark to justify the setting up of any healthcare and medical facility in an area as ‘wrong for rural Sarawak and Sabah.

“I just don’t know why the government is not sensitive to the rural people here, and not feel their pain.

Dennis recalled that in 2020, then-assistant minister of local government and housing Dr Anua rRapaee during his visits to Long Bedian and Long Luteng, was shocked upon being informed about long distance as well as other difficulties that the Penans had to endure just to obtain healthcare services at the Long Bedian Clinic.

In this regard, Dennis remarked: “It may take another 50 years for a hospital to be built in Long Lama.

“The Long Lama Clinic itself is currently being run inside the community hall, after the old one was deemed unsafe (for occupation) a few years ago due to earth movements.

“The ministry has yet to undertake any repair works despite the long delay.

“The Long San Clinic is also operating at a building rented from the Roman Catholic Church.

“This issue needs to be resolved by the ministry after the long delay.”

Speaking at the launch of 2022 Health Policy Summit in Kuala Lumpur on Monday, Khairy ‘pleaded’ with Prime Minister Datuk Seri Ismail Sabri Yaakob to allocate more funds for public health, pointing out that the benchmark spending on public health was between four and five per cent of a country’s GDP, but for Malaysia, data had shown that it was only 2.59 per cent of the GDP in 2020.

In this respect, Khairy said he hoped that the Prime Minister would increase the budget for public healthcare to five per cent.