Google Doodle heralded what would’ve been the 94th birthday of the late Azah Aziz. — Screengrab from Google

KUALA LUMPUR (Aug 21): Today, Malaysian internet users who hop on the Google search engine might notice someone different greeting them. It is none other than Malaysian cultural icon Azah Aziz.

Google Doodle heralded what would’ve been the 94th birthday of the late Azah Aziz, considered the Tokoh Budayawan Melayu or the figure of Malaysian culture.

Thanks to her mother, Azizah Jaafar, Azah Aziz fell in love with the language, culture and arts that she’s now remembered by. Her passion for Malay textiles grew when she inherited a fine collection of early Malay textiles and garments from her mother, which paved the way for her to becoming a respected Malay culture expert.

Azah Aziz dedicated almost four decades of her life to journalism. Starting as a secretary in the Straits Times, she went on to establish the Malaysian Women Journalists Association and was its first president from 1971 to 1978.

She fought for the rights of women and championed issues such as salary equality, separate taxes for working wives and Muslim family amendments. She also chaired many positions including as founder of Pertubuhan Tindakan Wanita Islam (Pertiwi) and Islamic Women’s Action Organisation.

Some of the household names she interviewed during her time in journalism were the former prime minister of India and its first woman prime minister, Indira Gandhi, boxing legend Muhammad Ali and his family, and the first woman cosmonaut who went into outer space, Valentina Nikolayeva-Tereshkova.

As if these accomplishments weren’t impressive enough, Azah Aziz later founded her own publishing company and became one of the first women in Malaysia to publish books on poetry, games and songs for children, such as Adik Comel, Ibu, Keluarga Kita, O! Bangau dan Burung Kenek Kenek, Kenangan Budi, Pantun-pantun Melayu, Taman Seni, Dendang dan Dondang Kanak-kanak and many others.

Over the years, Azah Aziz kept the flames for her love of the arts and textile burning.

She collected an astonishing collection of over 100 types of heritage clothing like baju kurung, baju Melayu and kebaya, antique garments and fabrics from the old Malay world.

With her deep knowledge of costume, jewellery and textiles, Azah Aziz was the go-to person for anything and everything about Malay culture and customs — introducing them to people all over the world through art festivals and international seminars.

She even authored more than ten books on Malay textiles, including the seminal volume on Malay textiles and costumes titled Rupa dan Gaya: Busana Melayu which discusses the influence of cultural values, traditional customs and historical developments on its evolution.

Her daughter, Tan Sri Zeti Aziz shared that she would hat have been here if not for Azah Aziz’s constant support. 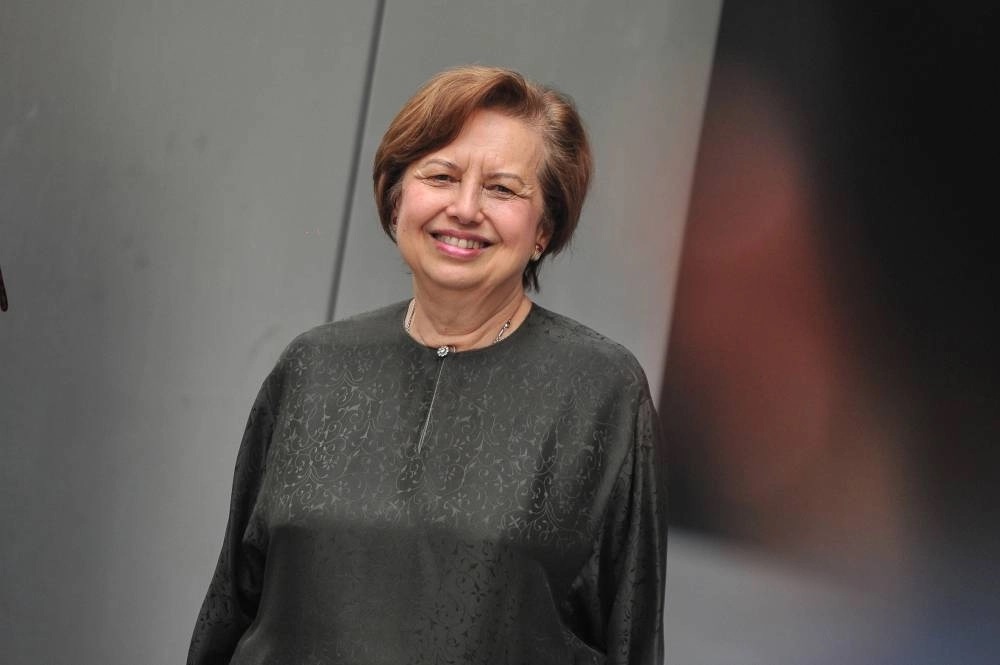 Tan Sri Zeti Aziz said that her mother was a fighter, with a very strong passion for the issues that she believed in. – Malay Mail photo

“She was a fighter, with a very strong passion for the issues that she believed in.

“Growing up, she was very liberal in her thinking on many issues and wrote passionately about it for women’s rights, children’s rights, but I wouldn’t describe her as a feminist but rather more as an advocate of women’s issues and those issues relating to children.

“As a little girl, I remember her interest in writing. She wrote about textiles, costumes and how they would be worn, and about cultural heritage.

“She believed, like if you wanted to wear a modern outfit, you should always wear it, whether it’s the Western modern outfit or from any other country, but you shouldn’t change the structure of your own traditional clothes to preserve and conserve its originality,” Zeti said.

She said that what’s unique about her mother’s book on textiles is that it incorporates classics and poetry from a hundred years ago, which gives a deeper insight into the beauty and special distinctiveness of the textiles.

“I want the world to know about the Malay cultural heritage embodied in the textiles and costumes that I had the book translated into English,” she said, adding that the book will soon be published and widely distributed.

To know more about Azah Aziz, watch this video that Google Malaysia made in honour of her here.