Wednesday, October 5
You are at:Home»Columns»Just another point of view»Memories of Nilai: With Gordon Ramsay and Aunty Aini’s ‘bush’ 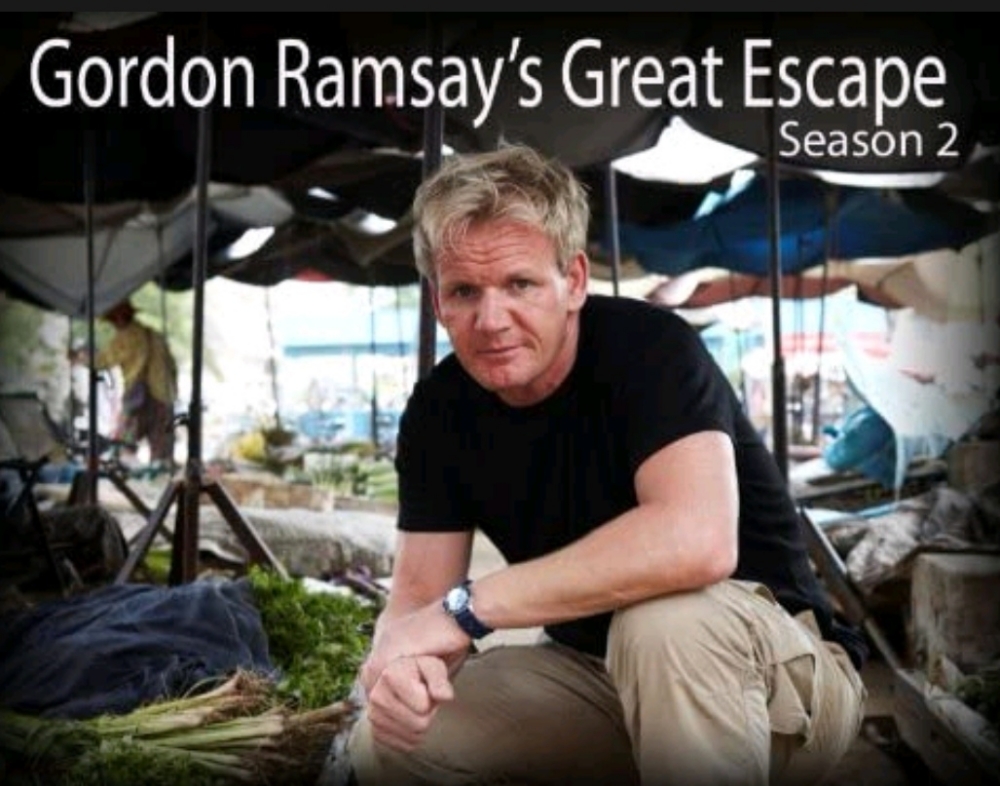 IT was in 2011 when I was given the assignment to travel with and be a film fixer for BBC America’s latest Gordon Ramsay travelogue foodie programme called ‘The Great Escape’, which was to be shot in Penang, Kuala Lumpur, Seremban (Nilai to be precise) and Sabah.

Somehow Sarawak had missed the opportunity due to our authorities not allowing them to shoot in either Mulu or the Niah Caves – so Sabah had happily volunteered Gomantong instead.

Watching a television show like Gordon Ramsay’s in the warmth and security of your living or bedroom as he jokes his way through exotic locales, creating delicious-looking foods and having a real adventure, may look like an easy enough job; all sunshine, laughs and great company – and food!

Nothing is further from the truth!

It’s all hard work, and like those working in the film industry, they all share that favourite phrase: “Hurry up and wait!”

Also: “If anything can go wrong, it will…”

But our heroes Alan D’Cruz and Harbans Singh were there always to save the day!

To say that we had our share of hiccups was an understatement!

The television series, when released on May 23, 2011 as Episode 3 of Season 2, was a great success. It was 46 minutes long, took us over three weeks to shoot at four major locations – and you’d never guessed what was the ultimate scene!

It was Gordon Ramsay cooking his own creation of a vegetarian curry dish that he personally served to the then-prime minister Najib Razak at a Vesak Day celebration in Kuala Lumpur’s largest Buddhist temple!

I kid you not! Even Patrick Teoh and Yasmin Yusof were there to bear witness! 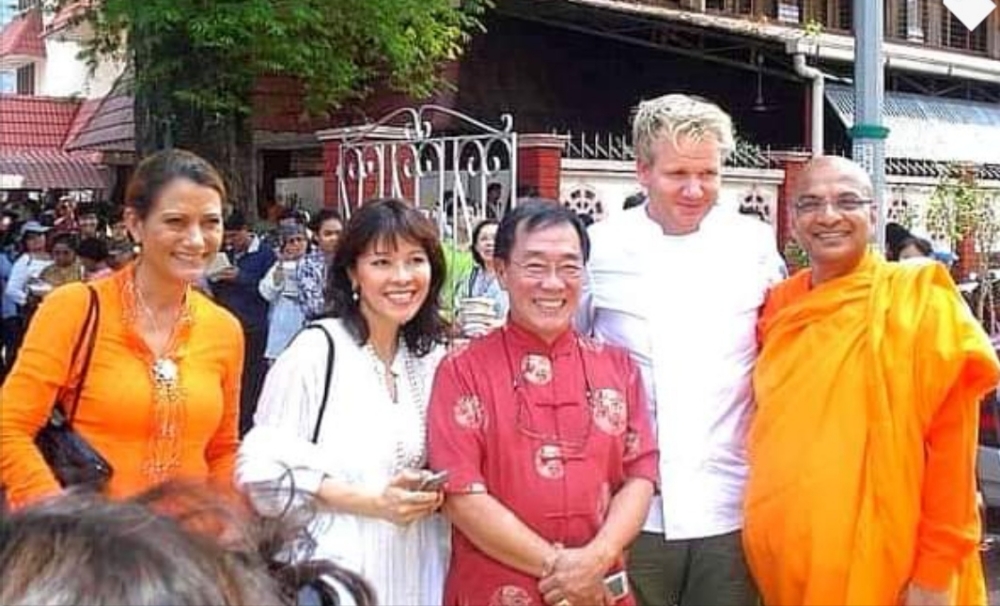 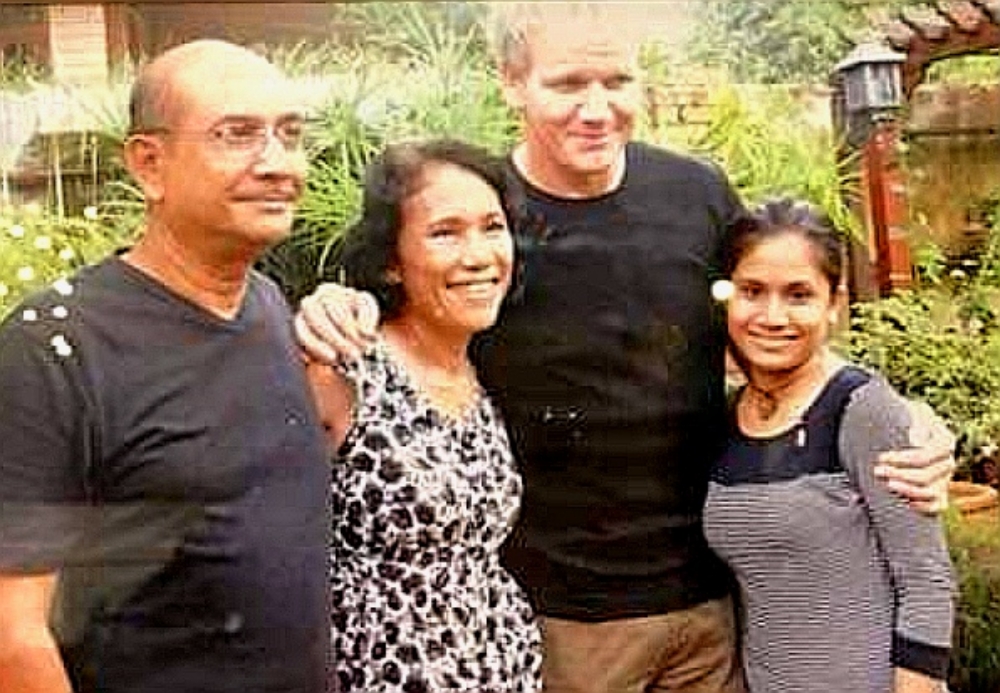 Gordon Ramsay in Nilai, with Aunty Aini, her husband and her daughter.

Aunty Aini’s has a spacious garden setting with an exciting local menu – her ‘Rendang Itik’ is a prize-winning dish; so are her many other scrumptious offerings.

It was not just spiciness in her food, but also her repertoire of off-colour jokes that did put Gordon to blush somewhat.

Imagine he had to ask her what’s a ‘clitoral bush’ – when she offered those bluish lovely blooms for him to show how she extracted the colour blue for her ‘rendang’ rice side-dish!

Indeed, the mention of the naughty word ‘kilintik’ brought forth all-round ruckus from the locals on set on that take! 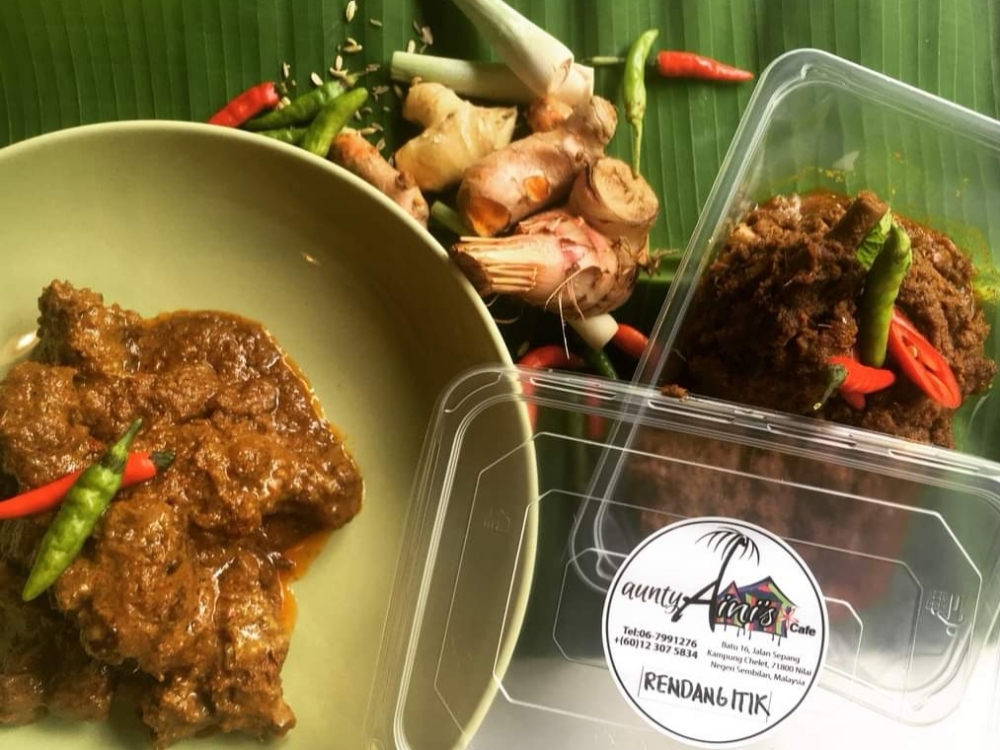 Gordon Ramsay is one of the few A-lister celebrity chefs, and there are only a handful of them: others had included Anthony Bourdain, Nigella Lawson, Jamie Oliver and Andrew Zimmern.

These are the television personalities for whom any studio or international channel will allow for them to have free rein on whatever subject, topic or show that they wish to make – in other words, they can do no wrong as they are at the top of their game and the television audiences around the world simply love them for their persona and for what they bring to their shows.

However, they’ve not been as successful in branching out into real-life restaurant chains or setting up boutique eateries in their own names and logo – both Gordon and Jamie have had to shut down various outlets after losing money in the retail businesses that they had ventured into.

Despite all this, according to Forbes Magazine, in 2022, Gordon Ramsay’s net worth is US$820 million with a monthly income of US$12 million. In 2012, he had sold off the majority shares of his American business, including his brand name, for US$200 million.

When he shoots on location outside his home country, Gordon Ramsay constantly travels with a sizable number of crew that would include a director, a producer, a cameraman, a sound recordist, a writer, several personal assistants and a culinary arts specialist who acts as the researcher and writer (most television programmes eventually would have a tie-in book deal/publication, fully illustrated and with recipes, and lushly shot photographs).

When Gordon Ramsay shoots a television series, it’s an entire package deal – tie-ins with books, publications, videos and DVDs with future streaming repeats, and maybe even a future follow-up series – ‘The Great Escape 2?’

Nothing is left to chance – it’s milked for every single available opportunity to make even more money!

There are two sides to Gordon Ramsay: there’s the man from Hell’s Kitchen – the nasty, loud, foul-mouthed angry and quick-to-lose-his-temper chef who never lacks for a four-letter word to sprout off.

But that’s his on-screen persona. In real life and as a matter of fact, Gordon Ramsay is a gentle giant. He is a gentleman – polite, soft spoken and extremely kind. He treats ladies and kids as well as elders with respect and reasons himself out well.

When you first meet the real Gordon Ramsay, you’re somewhat taken aback, before you think he’s trying to pull a fast one on you.
He doesn’t.

He’s genuinely sincere, down to earth and speaks politely. He’s also a bit of a loner and rather keeps to himself – I sense that he’s somewhat shy as a person.

He seldom socialises with his crew either.

Gordon Ramsay is a perfectionist. He’s a really excellent cook (he personally has seven Michelin stars to his name) and the ladies simply adore him.

I see him react and respond to what the other chefs would say and suggest, and you can notice his level of attention shown to them.

In Nilai, he had spent the best part of four hours in the kitchen with Aunty Aini and they had a nice little rapport going on. The ‘Beef Rendang’ that eventually emerged was the result of Aunty Aini guiding and supervising him was truly out of this world – it was that good!

After Nilai, we had gone on to Penang where the famous Kathryn Cheah and son Audee Cheah showed Gordon Ramsay how to cook ‘Tau-Yew-Bak Peranakan Style at their home restaurant; and eventually finished the series with a cooking competition at Kuala Lumpur’s Berjaya Culinary Institute where he had lost to a local chef by becoming second!

For those who’d like to watch the full Malaysian episode of Gordon Ramsay’s ‘Great Escape’, watch it on YouTube here.

Sarawak had missed out on the segment on Bird’s Nest Soup and due to no durian season, the durian shoot had gone to Balik Pulau in Penang, but had ended on the editing room floor as Gordon Ramsay found the King of Fruits to be ‘the foulest smelling thing’ that he’s ever had the misfortune to experience – he was no fan at all!

Previous ArticleTengku Zafrul: Only 2.5 pct of Federal Govt debt is foreign-denominated
Next Article Justice to commemorate