Wednesday, October 5
You are at:Home»Business»BizHive»China’s bad news just keep getting worse — but the risk is worth taking

For China, the bad news just keep getting worse. Despite the sharp sell-off since our last update, we remain convicted in our investment case for China.

Our conviction for Chinese equities stems partly from the country’s policy backdrop that still remains accommodating relative to the developed world.

China is unlikely to budge from its zero-Covid policy. While new restrictions are still possible, a crucial difference is that future lockdowns should be much more targeted, and implemented with consideration given to potential economic impact.

Moreover, we believe investors may have been too pessimistic on the earnings outlook for Chinese companies, with risks in China’s equity market largely been discounted by markets.

The valuations of Chinese equities look attractive, with a lot of negatives already priced in. We project a 62.9 per cent upside potential over the next two years. 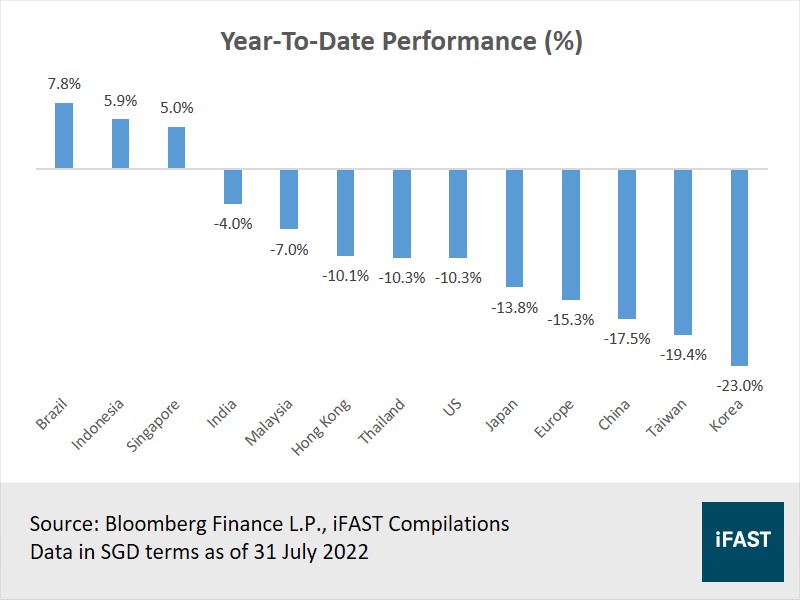 Chart 1: China is one of the worst performing stock market under our coverage

Our conviction for Chinese equities stems partly from the country’s policy backdrop that still remains accommodative relative to the developed world. China has been ramping up efforts throughout 2022 to revive its economy and boost market confidence. These included interest rate cuts, issuance of special bonds for infrastructure investment, tax rebates, and a cut in vehicle taxes.

More recently, the People’s Bank of China (PBOC) has responded to weaker economic data with surprise interest rate cuts, lowering the rate on its one-year policy loans by 10 basis points to 2.75 per cent and the seven-day reverse repo rate from 2.1 per cent to two per cent.

It was the first time since January that those rates had been cut, and more cuts could be coming given that China’s recovery remains fragile.

There was also fresh support for the property sector, as the government has instructed state-owned China Bond Insurance Co Ltd to provide guarantees to a number of private property developers issuing bonds, adding to signs of official support for an industry grappling with a debt crisis and slumping home sales.

China’s “verbal intervention” has also continued. In a meeting with top officials from six major economic provinces that account for about 40% of China’s economy, Premier Li Keqiang vowed to “reasonably” step up policy support to stabilise employment, prices and ensure economic growth, while also urging the officials to bolster pro-growth measures.

It is also worth noting that China is easing its monetary policy at a time when major central banks are tightening theirs. This markedly different monetary stance has been enabled by comparatively very low inflation in China compared to the US.

While China is unlikely to hit its 5.5 per cent growth target this year, this does not mean that China is abandoning economic growth altogether. China is still expected to grow by 3.8 per cent this year – producing incremental economic output equivalent to the size of Poland – sluggish by its own standards but a level most countries would envy.

Zero-Covid policy likely remain, but will be more pragmatic 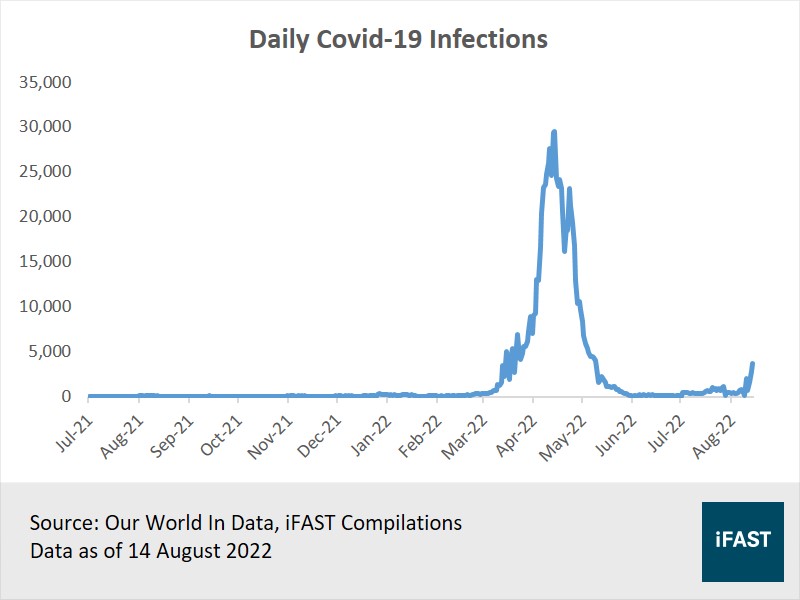 China is unlikely to budge from its zero-Covid strategy, with leaders remaining determined to prevent the spread of the virus.

For an indication of China’s extreme vigilance against the virus, look no further than the pandemonium at an Ikea outlet in Shanghai, where panicked shoppers rushed for the exits after the revelation that a close contact of a six-year-old boy with an asymptomatic case of Covid-19 forced authorities to lock down the store. 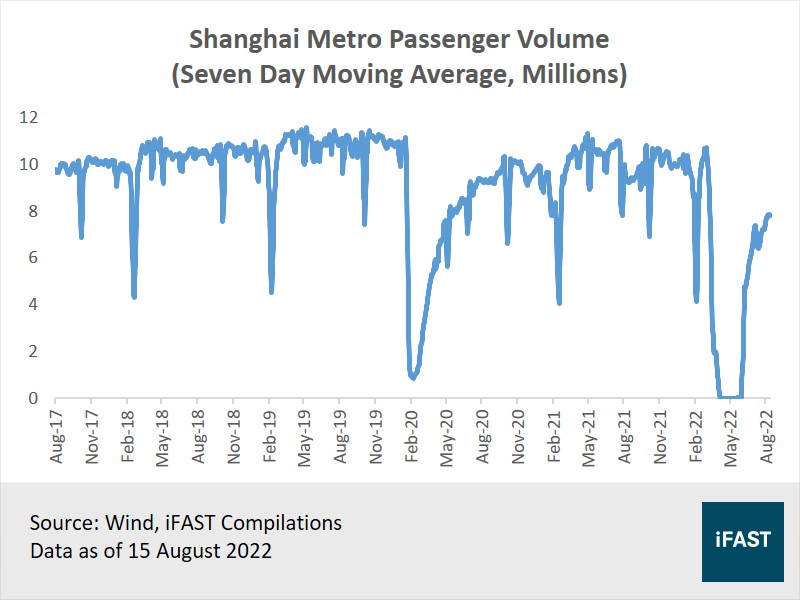 Chart 3: Mobility in Shanghai has not been significantly curtailed

However, we wish to highlight that the scale of the outbreak is less severe this time round. Even as China’s Covid-19 cases have surged to a three-month high, with 3,757 daily infections reported across China (as of 14 August 2022), it remains a small fraction of the tens of thousands of daily cases recorded at the peak of the outbreak in April.

Despite the official rhetoric that the government will not change its zero-Covid policy, China has actually been adjusting and softening its stance since 2021, moving subtly from a strict approach that pursues zero infections towards what they now call “dynamic zero”, a less restrictive approach that aims to contain outbreaks in the shortest time possible.

In recent times, China has also taken steps to ease its Covid-19 border restrictions. Not only did it reduce quarantine times for inbound travellers by half, China has also shortened the length of suspensions for inbound airline flights that carry passengers infected with Covid-19.

Furthermore, the government has been highlighting the need to achieve greater balance between growth and Covid-19 containment measures. In May, Premier Li Keqiang summoned about 100,000 officials to an unprecedented video conference and urged local officials to better balance Covid controls and economic growth.

This message was again highlighted in a meeting of the Politburo in July, during which policymakers emphasised the “need to look at the relationship between virus prevention and economic growth”.

On the ground, there are signs that policymakers have been making good on their pledges to balance growth and Covid-19 containment. This was evident in Shanghai, where widespread lockdowns have been eschewed in favour of more targeted control measures to snuff out the recent flare-up in cases.

While the spontaneous lockdown of an Ikea store in Shanghai was certainly extreme, we note that mobility in Shanghai has not been significantly curtailed, with public transport still up and running.

While new restrictions are still possible, a crucial difference is that future lockdowns should be much more targeted, and implemented with consideration given to potential economic impact. 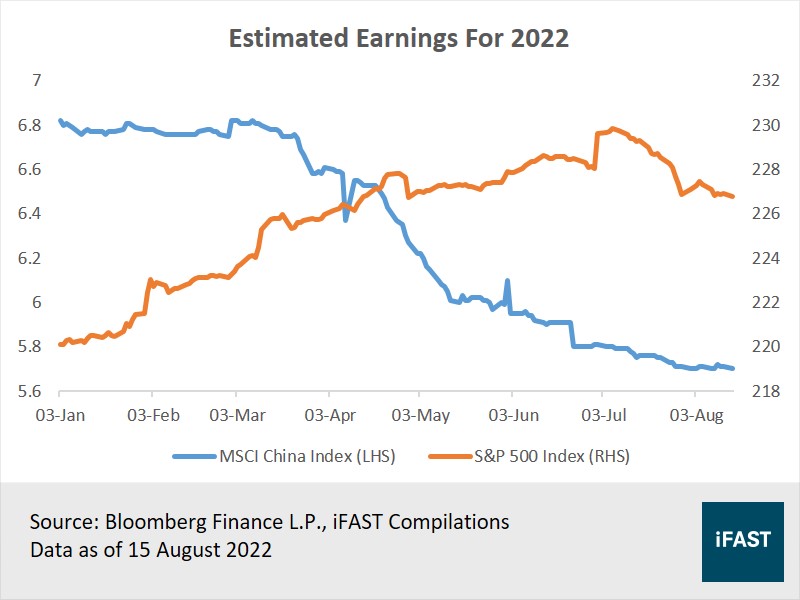 Moreover, we believe investors may have been too pessimistic on the earnings outlook for Chinese companies, with the earnings estimates for MSCI China Index in 2022 having already been slashed by 16 per cent this year.

This is in stark contrast to the US equity market, where earnings estimates for the S&P 500 Index have seen upward revisions this year despite mounting macroeconomic risks.

As such, we believe that the risks in China’s equity market have largely been discounted by markets, and that there is scope for earnings to surprise from here. Alibaba reported better-than-expected earnings and sales for its most recent quarter despite rising economic headwinds in China.

More importantly, we believe the worst of the regulatory crackdown on China’s tech sector may be behind us, with regulators hinting over the past few months that they may ease their scrutiny of the tech sector.

In late-June, Boss Zhipin and Full Truck Alliance resumed new user registrations following a nearly one-year suspension for cybersecurity review, another sign that China is wrapping up its sweeping crackdown on internet platforms.

During the Politburo’s meeting in July, regulators reiterated their intention to normalise regulation in the sector, and “promote the orderly, healthy and sustainable development of the platform economy”.

While the shadow of delisting risk continues to hang over Chinese equities, it is unlikely to have a significant impact on fundamentals in the long-term. Moreover, less than eight per cent of Chinese equities owned by US investors are held by investors that cannot trade in Hong Kong, according to Goldman Sachs estimates.

On the plus side, Chinese companies that upgrade their listing status to “primary” – as what Alibaba intends to do – will gain access to the Stock Connect program, which will allow companies to tap into mainland China’s vast investor base.

At this point, sentiment towards Chinese equities is one of extreme pessimism, with investors struggling to look beyond China’s present headwinds and just want nothing to do with China anymore. This is a sign that the market is not too far from the bottom.