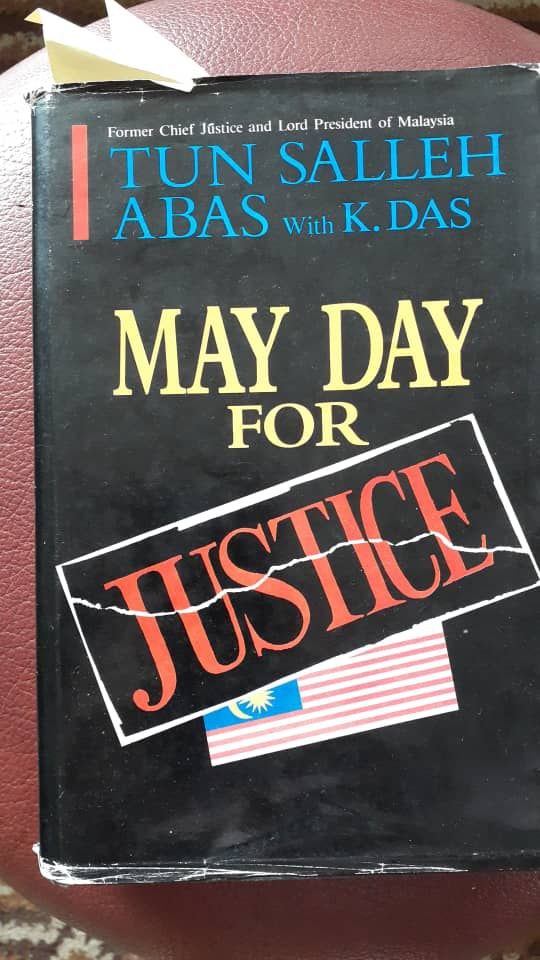 The book ‘May Day for Justice’, written by Tun Salleh Abas with K. Das.

I THOUGHT that had been the first and the last time that the Malaysian Judiciary came under attack by politicians in power.

In May 1988, the Chief Justice and Lord President Tun Salleh Abas and two other judges of the Supreme Court, Tan Sri Wan Suleiman Pawanteh and Datuk George Seah, were sacked by fellow judges acting as members of a Tribunal set up by the government. They were accused of misconduct while in office.

Five other judges of the Supreme Court were suspended from performing their functions.

According to Tun Mohamed Suffian Hashim, Lord President (1974-1982): “The four witnesses called by the Attorney General before the Tribunal set up to [to remove]Tun Salleh, each declared to tell the truth and nothing but the truth; they were not required to tell the WHOLE truth. Indeed, the whole truth was not allowed to emerge …”

For more information, get hold of a copy of the book ‘May Day for Justice’, written by Tun Salleh Abas and K. Das, Magnus Books, Kuala Lumpur, and printed by Percetakan A-Z Sdn Bhd, 1989, for the authors’ version of the affair.

Thirty-four years later, since mid-August 2022, the same judiciary has been under siege again!

This time around, the threats were directed at the person of the Chief Judge, Tun Tengku Maimun Tuan Mat via social media.

I can just about hear the air raid sirens!

What sparked the flare-up?

Two events. First, a piece of information obtained from some source – about the past connection of the trial judge to a bank for which he was working before he became a judge.

This information was regarded by the defence as a fatal piece of evidence that could possibly turn the table against the prosecution at the final Court of Appeal.

The deduction of this information was rejected by the panel of judges of the Federal Court.

Having failed in this effort, the lawyers representing Datuk Seri Najib Razak requested for an extension of time for the appeal hearing, saying that a period of three or four months would be required by the defence lawyers to prepare their submissions.

This request for extension of time was not granted.

These rejections have been used by those sympathetic to Najib to malign the Chief Judge. Even her husband was made the scapegoat: an attempt to persuade the judge to recuse herself from the panel, or for the appointment of a new panel of judges to conduct the hearing of the final appeal.

The cyber war on the judiciary is still raging, more intense by the day, especially after the Federal Court, refusing to be intimidated, pronounced their verdict on Tuesday.

The Federal Court concurred with the decision of the trial judge who had convicted Najib in respect of seven charges (criminal breach of trust, money laundering…) and sentenced him to a 12-year imprisonment and imposed on him a fine of RM210 million.

And the apex court final court of appellate jurisdiction of the country found no justification to intervene in the decisions of the lower courts. End of appeals.

Not end of cyber attacks.

How do the rest of us Malaysians feel about all this?

I liken this scenario to watching the finals of a football match. The rule of soccer is that a match must finish within a timeframe.

During the match, the referee decides on the spot whether or not a foul or an offside has been committed, and his decision is final. Of course, cases of players disagreeing with the referee’s decision are not unknown, but that is another matter – for decision by the club officials later on.

The apex court in Malaysia has done its job well; it has boosted people’s confidence in the integrity of the judiciary. Its judges, in refusing to be intimidated, have shown courage in preserving the independence and the integrity of the courts at all levels of jurisdiction.

Any attempt to substitute the present judicial system with another system is to be resisted.

Without the judiciary, the other two pillars of democratic government, the Executive and the Legislature, cannot function properly. If this is what we want in Malaysia, we will have an oligarchic government supported by religious fanatics.

If that happens, Malaysia will not last in its present form. We need to think long and hard about what kind of country we want to pass on to our children and grandchildren.

Let this be the second and the last time that the Malaysian judges are allowed to be victimised.

If you were around and could follow what was going on in Kuala Lumpur in May 1988, that was a successful attack by the ruling politicians.

One of the victims was a friend of mine, Datuk George Seah. In the 1950s, he had a legal firm at Jalan Wong Nai Siong in Sibu Town. Whenever I was in Sibu for youth welfare work, I slept in one of the rooms a floor above his office.

When George was humiliated in 1988, I was devastated. It is my verdict that George was unjustly punished by his fellow judges.