Tuesday, February 7
You are at:Home»News»Nation»Malaysians turn out in droves to celebrate National Day at Dataran Merdeka
For the freshest news, join The Borneo Post's Telegram Channel and The Borneo Post on Newswav. 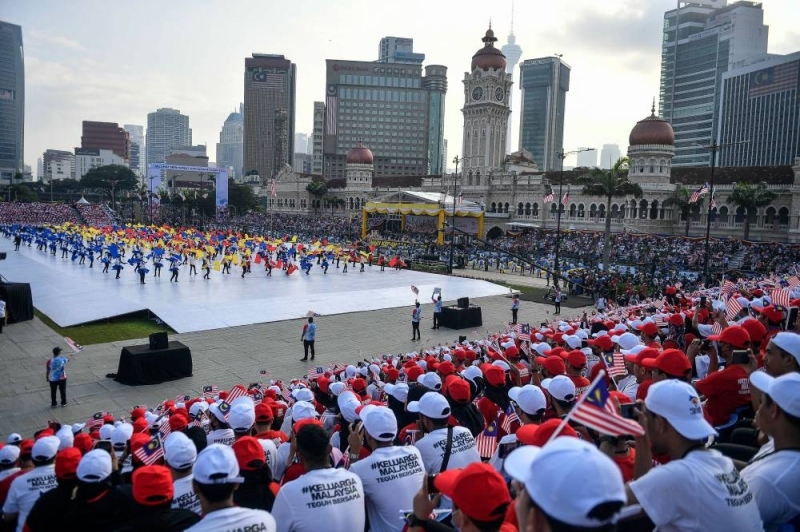 KUALA LUMPUR (Aug 31): The harmony of the Malaysian Family and excitement was evident on the faces of thousands of people from all walks of life, as well as age, race and religion, who converged to Dataran Merdeka to together celebrate the 2022 National Day.

With the theme “Keluarga Malaysia Teguh Bersama” (Malaysian Family Strong Together), this year’s historic day celebration is meaningful in expressing the gratitude and pride of the country’s pluralistic society who gathered at the main location of the National Day celebration, with most of them arriving as early as 4.30 am to witness the event.

A sea of people, including foreign tourists, took the opportunity to show their appreciation and understanding of the theme by displaying the spirit of patriotism, togetherness and unity in enlivening the colorful and large-scale celebration.

After two years of celebrating the occasion under the new norm due to the Covid-19 pandemic, the parade and march-past by nearly 20,000 participants of various contingents this year showcased components of nationhood, frontliners, governance, public order, national security, Malaysian Family and air show.

The parade, which also involved a total of 369 land assets and 68 air assets, as well as 76 animals in service, was broadcast live by television stations and social media sites.

The Radio Televisyen Malaysia (RTM) orchestra led by the station’s music director, Datuk Mokhzani Ismail, who is involved in the event for the first time, kept the crowd rejuvenated by playing patriotic songs.

According to Communications and Multimedia Minister Tan Sri Annuar Musa, who is the main organising committee chairman for the 2022 National Day and Malaysia Day celebrations, the horse carriage was last used by Tuanku Syed Sirajudin Ibni Almarhum Tuanku Syed Putra Jamalullail during the National Day celebration at Dataran Putrajaya in 2005.

As soon as Al-Sultan Abdullah and Tunku Azizah took their place at the royal box, five helicopters did a fly-past accompanied by the national anthem.

His Majesty was then given the Royal Salute and then invited to inspect the Guard of Honor mounted. by four officers and 103 members led by Major Nurul Fauzan Md Sabri, of the First Battalion of the Royal Malay Regiment.

The 2022 National Day celebration today started with the singing of the national anthem and then the hoisting of the Jalur Gemilang, which was accompanied by a 14-gun salute, symbolising the 14 states in Malaysia, by Unit 41 Battery of the Royal Artillery Regiment led by Lt Col Mohamad Asri Che Wil.

The celebrative atmosphere was enlivened when the theme song for the event, “Keluarga Malaysia Teguh Bersama” (Malaysian Family Strong Together) echoed in the air.

The song was sung by Alif Satar & The Locos, together with the Keluarga Malaysia choir, accompanied by the RTM Orchestra.

The focus after that was the reading of the Rukun Negara by 65 participants from various races, led by national sprinter Muhammad Azeem Mohd Fahmi, the current Malaysian 100 metres outdoor record holder with a time of 10.09 seconds.

This was then followed by the shouts of ‘Merdeka’ seven times which echoed throughout Dataran Merdeka.

This year,  a special color guard performance on ‘Keluarga Malaysia Teguh Bersama’ was held by 600 secondary school students under the coordination of the Student Talent Development Unit, Student Development Sector of the Selangor State Education Department.

Leading the segment on nationhood was a parade by 60 cadet officers from the Military Training Academy, National Defence University of Malaysia (UPNM) and trainee cadets from the Royal Malaysia Police Training Centre carrying huge flags.

It was followed by a procession of 330 bearers of the Jalur Gemilang and state flags.

In an illustration of the togetherness and synergy of the Malaysian public services, 27 ministries and departments from the general service, economic, industrial, security, infrastructure, public and social sectors joined in the contingent for ministries.

There’s also a contingent by the Malaysian Chefs Association, led by its president, Khairuddin Kamarudin. Tunku Azizah is the patron of this association which was established in 1977 with the objective of uniting culinary professionals and creating relationships between industry players and forging professional collaboration.

The parade was then enlivened by the Kembara Merdeka Keluarga convoy, comprising five units of four-wheel drive vehicles from the Malaysian Information Department and 65 high-powered BMW K16 motorcycles, led by Sabri Said.

For the segment on sports, which is the element that unites the Malaysian people, national athletes including those who represented the country at the 2022 Birmingham Commonwealth Games,  in two ‘hop-on hop-off’ buses received thunderous applause from the audience.

A total of 650 participants from 33 government-linked companies (GLC), government-linked investment companies (GLIC) and private companies, as well as floats carrying various mascots of local animated characters such as Didi & Friends, Omar and Hana, BoBoiBoy and Papa Zola enlivened the parade with their respective actions.

In the public order segment, the frontline contingent attracted the attention of the crowd, with the participation of health workers from the Ministry of Health and security personnel from the Royal Malaysia Police (PDRM).

For the national security segment, the Malaysian Armed Forces (ATM) started the parade with a demonstration on rescuing hostages by the elite force, followed by ATM assets.

For the first time, Kuala Lumpur’s airspace roared with the sound of fighter jets and other aircraft, including helicopters, belonging ATM, the police, the Fire and Rescue Department and the Malaysian Maritime Enforcement Agency.

The theme song for ‘Keluarga Malaysia’, composed by Jerry and lyrics by Annuar, who is also the Chairman of the 2022 National Day and Malaysia Day Steering Committee, concluded today’s performance. – Bernama